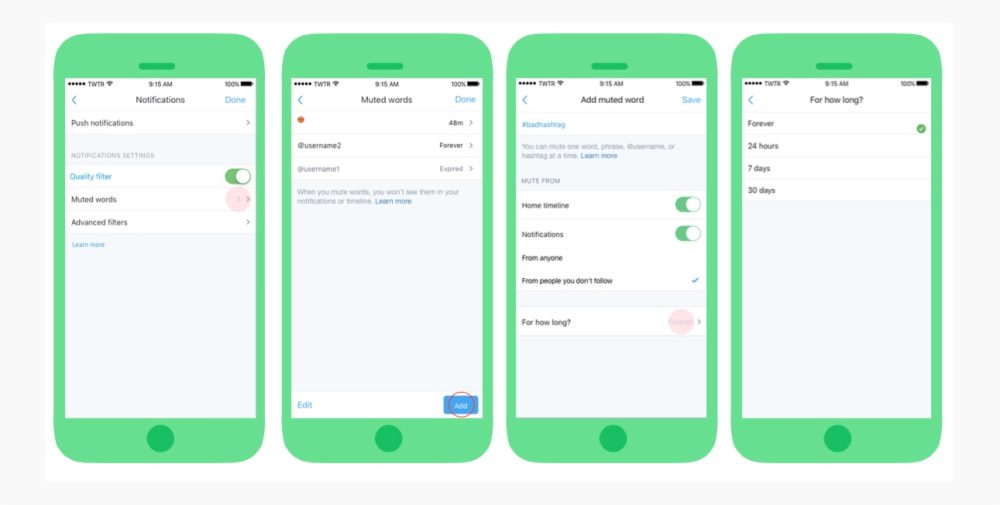 As part of an ongoing effort to tackle abuse and offensive users, Twitter is adding some new muting features to its apps.

Similar to what has been offered by third-party Twitter clients for sometime, users will be able to hide tweets from specific users or tweets that contain certain keywords from ever appearing in their timeline …

The Twitter app added muting features for notifications at the end of last year. It will shortly roll out the same capabilities to the home timeline.

The Twitter app will also include options to hide users that don’t have a profile photo, cutting down abuse from so-called ‘egg accounts’ which typically retain anonymity by using the default Twitter profile pictures. There will also be settings to mute accounts that use unverified contact information.

The Twitter keyword filters can be applied to anyone or just accounts that you don’t follow, and can be set to be active for a day, a week, a month or run indefinitely.

When the new features launch, they will be found within notification settings. Users can pick to apply the filters to the timeline and notification views separately.

These features are being introduced under the Twitter safety umbrella, to give users more control of what content they see whilst using the service.

The initiative follows much community criticism that felt Twitter was not doing enough to combat harassment and trolling. Jack Dorsey promised the company would do more, and it seems like Twitter is following through on those promises.

In addition to the muting filters, Twitter has said it using algorithms to detect accounts engaging in abusive behavior, before real users even report them explicitly. Accounts will be flagged and limited until their behavior changes.

The Twitter app is available for free in the App Store, compatible with iPhone and iPad. The new muting features will roll out in the coming days.