Apple’s iOS and macOS platforms both lost share to Chrome OS in the US K-12 education market last year, according to new data from Futuresource Consulting (via The New York Times).

Android also posted declines for the US market with a drop of one percentage point year over year to land at 1% share in 2016. Windows managed to maintain its 22% share from the year before.

The report cites the price point of Chromebooks along with Google’s education software offerings as major contributors to its growth, as well as a focus on 2-in-1 products by both Microsoft and Google.

The strong combination of affordable devices, productivity tools via G-Suite, easy integration with third party platforms/tools, task management/distribution via Google Classroom and easy device management remains extremely popular with US teachers and IT buyers alike. The rise of Chromebooks has also set new industry benchmarks with regards to average device pricing, with prices reaching as low as $120 on certain projects…

Both Microsoft and Google (and their respective partners) have announced a wide range of 2-in-1 products designed specifically for education and are expected to sell for under $300. The 2-in-1 form factor is ideal for education, providing schools with flexibility in usage. In addition, the technology behind stylus/pen usage has developed rapidly and ‘inking’ is expected to become widespread and add value to device usage.

The declines for Apple in the US market come as shipments overall grew 18% year over year to 12.6 million units in the US. 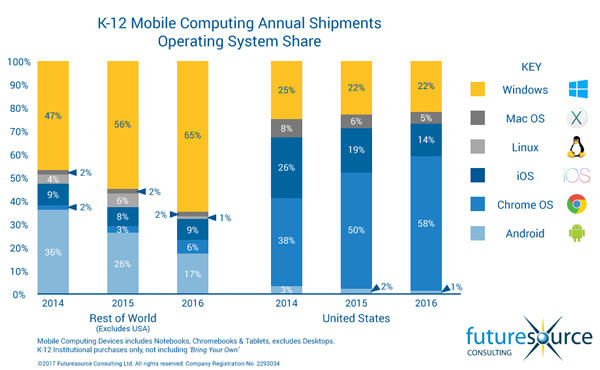 The gap between Chrome OS and Apple’s operating systems is less so for the rest of the world, with Chrome OS doubling its share to 6% in 2016 as iOS grew one percentage point to 9% and macOS dropped one to 1%. Windows grew its share in the rest of the world to 65% from 56% of the market in 2015 to continue its lead. And Android declined from 26% in 2015 to 17% last year.

The report notes the launch of Apple’s ‘Classroom’ app and new education features in iOS 9.3, including multi-user support for iPads, as the company’s notable contributions to the space in 2016. Apple also recently launched a new $199 Pro Apps Bundle for Education customers that offers its professional software for a significantly discounted price.