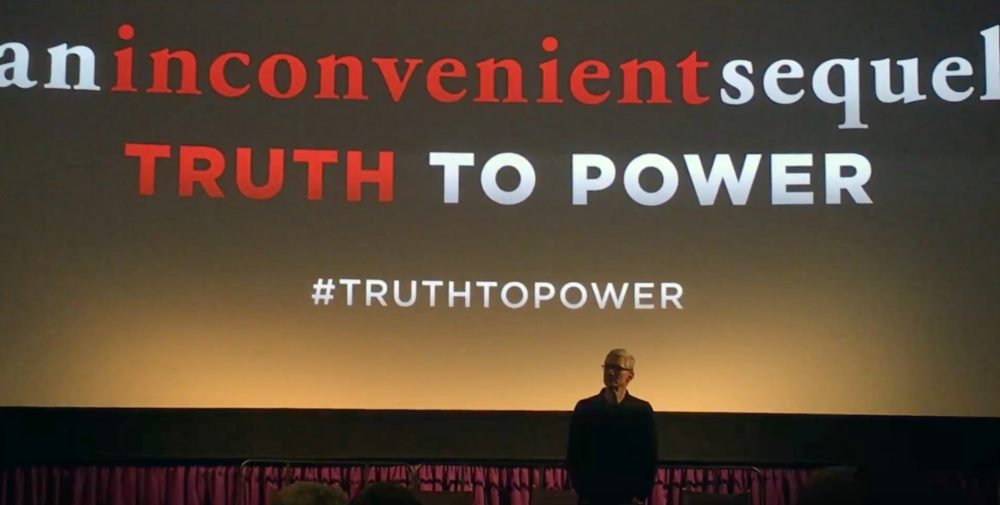 Former vice president and current Apple board member Al Gore today debuted his new movie “An Inconvenient Sequel: Truth to Power” in Silicon Valley. The movie comes as a sequel to the original film debuted in 2006.

In attendance of the debut in Silicon Valley today were Apple CEO Tim Cook and VP of Environment, Policy, and Social Initiatives Lisa Jackson…

Cook gave the introduction for the film, talking about climate change as a whole and initiatives currently in place to combat it. The Apple CEO explained that countries are coming together to push towards a cleaner environment and that there are a lot of reasons for optimism:

“There are signs all around us of the climate crisis, but there’s also great reasons for optimism. There’s renewable energies that have been developed and are being widely deployed. Almost every country in the world has agreed to do certain things and markets are rewarding renewable energy everywhere.”

“There’s a lot of reasons for optimism. But of course the clock still runs and the urgency has never been greater. So I think there’s never been a better time for this film.”

After his short opening speech, Cook introduced Al Gore and some of the brains behind the film before the viewing. After the film was shown, Lisa Jackson joined Al Gore and Jeff Skoll on stage for a brief discussion on climate change and the film.

For those unfamiliar, “An Inconvenient Sequel: Truth to Power” centers on Gore’s push to battle climate change and follows him from 2006, where the first film left off, up until 2016. Companies like SolarCity are central points of the film.

A decade after An Inconvenient Truth brought climate change into the heart of popular culture comes the follow-up that shows just how close we are to a real energy revolution.

The film is set to be released on July 28th of this year. A brief clip of the film can be seen below, as can Cook’s introductory speech at the viewing.