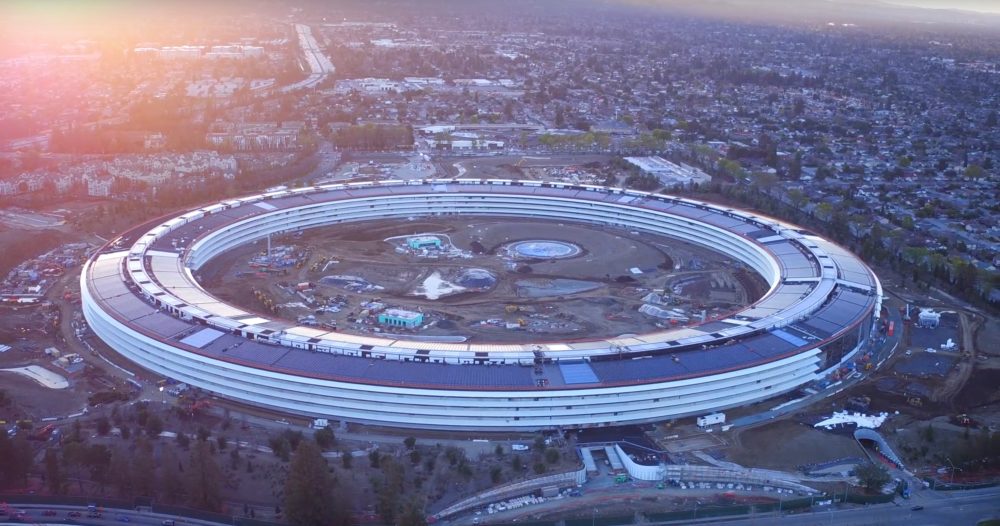 Just two weeks after Apple announced additional details for its new Apple Park campus, additional drone footage has emerged showing the headquarters. This new drone video is unique in that it does not feature any text overlays, focusing instead on offering a detailed look at every angle of the new campus…

The video shows work still being performed around the campus ahead of its opening next month. The center of the spaceship campus is still being filled in, while other areas are starting to take shape at a rapid pace. The newly-named Steve Jobs Theatre can be seen, while work is also continuing on the underground parking facility. Furthermore, work continues on the solar panel roof, as well as the tree and gardening design of the campus.

The new 4K drone video is absolutely beautiful, offering a simply flyover of Apple Park and providing peaks at the main building and other subsidiary buildings. There are no text overlays, allowing for some really high-quality and enjoyable footage.

Two weeks ago, Apple announced a handful of new details about its upcoming campus redesign, including the official name of Apple Park.  Apple also announced that the auditorium will be named after the company’s late CEO and founder, Steve Jobs Theater. Apple Park is set to open next month, which is when employees and executives begin to make the transfer.

“Steve was exhilarated, and inspired, by the California landscape, by its light and its expansiveness. It was his favorite setting for thought. Apple Park captures his spirit uncannily well,” said Laurene Powell Jobs. “He would have flourished, as the people of Apple surely will, on this luminously designed campus.”

You can see past progress on our timeline of drone footage, aerial photos and more. More interior details also recently emerged, including polished concrete ceilings, iPhone-like elevator buttons and flat doorways. Apple previously shared a number of photos of the interior, but many questions remained unanswered about the interior design at this point.

What do you think of Apple’s new campus thus far? Let us know down in the comments and watch the latest 4K drone video below: