A common Apple Watch question people ask me is when will Apple add built-in sleep tracking capabilities. My answer is always ‘soon I hope’, and watchOS 4 seems like the next opportunity to introduce it. But there are already third-party apps that let you try it now. The problem for me is finding the right time to recharge my Apple Watch when I wear it overnight.

My normal Apple Watch routine usually consists of waking up between 5 and 7 am and putting it on immediately for all-day fitness tracking, at least a 30-minute workout at some point every day, and dropping it on the charger just before bed around 9 and 11 pm. Apple Watch Series 2 running the latest watchOS version usually gets me to around 50% battery life by the end of the day.

Third-party apps including AutoSleep ($2.99) and Sleep++ (free) work best when you charge during the day and wear Apple Watch overnight. (You can use AutoSleep without Apple Watch, but then you’re not really sleep tracking with Apple Watch are you?)

I usually hit my activity goals before 8 pm so charging Apple Watch after that time is usually possible without missing health and fitness data. I put this routine to the test last week and quickly discovered that charging any time other than overnight is still too disruptive for me.

Changing around 9 pm with about 50% battery took until around 11 pm to reach 100%; sleep tracking for 6 hours only used about 3% battery

Charging Apple Watch Series 2 from 50% to 100% takes about two hours so starting at 8 pm will end around 10 pm. That’s a bit longer than what I expected and I found myself needing to stay up a bit later than normal while I waited for charging to complete.

On another night, I traveled out-of-town and skipped charging in the evening altogether. I still wore Apple Watch to bed for sleep tracking, but I needed to recharge around noon the next day which took over two hours since I was starting from much less than 50% battery.

What I found for me is that sleep tracking with Apple Watch for now can actually disrupt my sleep schedule when the goal is really to find patterns and insights and hopefully improve it.

The problem that I identify is lengthy charging times. I could use less battery during the day so topping off in the evening would take less time, but I don’t want to change how I use Apple Watch.

One thing I discovered that is not a problem: wearing Apple Watch overnight only used about 3% battery. 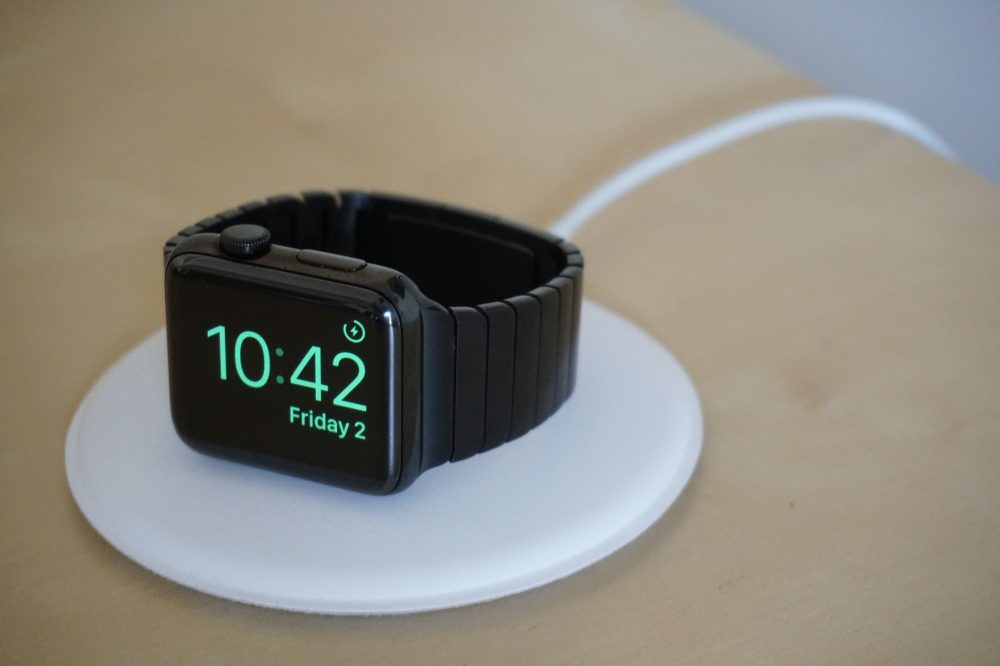 Ideally, I could routinely recharge while showering as I don’t typically wear Apple Watch in the shower. I’d need to go from whatever percent to 100% in about 30 minutes for this to work, however, and the numbers just aren’t there yet.

Somehow extending battery life for future versions of Apple Watch as rumored could help. If I was topping off from 80% or 90% each time, charging time would be less of an issue. The other solution would be somehow managing faster charging methods. I’m not sure which is easier, but I imagine the former is more likely.

I do think Apple must be working on this problem. Sleep is prominently featured as one of four main categories in Apple’s Health app (alongside Activity, Nutrition, and Mindfulness), but the iPhone Clock app’s Bedtime feature only tracks in-bed time and not asleep time; dedicated sleep trackers can do both. For now, hardware-based sleep monitors are probably ideal for most people. Apple recommends the Beddit 3 Sleep Tracker ($149.95) and you can find the previous version for much cheaper on Amazon. Withings Aura is another hardware option (I think Apple used to sell these until a certain lawsuit). S+ By ResMed ($50) is another choice I’ve seen but haven’t personally tested yet.

I’ve also thought about repurposing my old Jawbone Up24 fitness tracker as a dedicated sleep tracker, but it’s one more thing to charge and remember to use so I haven’t made it routine.

For now I’m probably sticking with the Bedtime mode feature in Apple’s Clock app on iOS 10. I like seeing how many hours of sleep are projected based on adjusting bedtime and wake time, but I’m not sure there are any perfect solutions yet. Based on my own feelings and what I often hear from family and readers, people do want to do automatic sleep tracking from Apple Watch. Theater Mode coming in watchOS 3.2 certainly helps with easily preventing the display from lighting up at night. Hopefully we see something in watchOS 4 at WWDC in June (or with new hardware possibly later in the year).