One of the best things about widely supported DAWs like Logic Pro X is the wealth of third-party plug-ins available from both large companies and smaller developers. And today on Logic Pros, we are looking at SLOO, a new software synth that runs via the Native Instruments Reaktor platform (version 6 only).

SLOO, or Shed Loads of Oscillators, is a unique voice swarm synth that makes use of 48 oscillators or synth voices to create fantastical sounds. Everything from your typical lead synth on acid to some of the weirdest and complex modulations I have ever heard. Let’s take a look:

I was immediately shocked by the seemingly odd interface and parameters. At first glance, the morphing pads and lush synth tones were impressive but something new entirely to learn how to control effectively, despite being quite experienced with synthesis. After some time exploring its sound capabilities and learning to tame its randomness, I have begun to find the beauty buried inside this complex beast.

Along the left side of the interface we find typical voice/synth parameters, including: pitch, pan, FM pitch/rate, LFO controls and more. These will control what Sloo refers to as a “swarm” of oscillators. Each parameter has three main controls: the first controls the center point of the “swarm”, the second randomly generates a new swarm pattern and the third controls the distance/amount of each voice from the central point.

Voice swarming works by generating a swarm of variations for each parameter. This swarm is controlled by the centre, pattern and amount controls. Close swarms behave more like a monosynth, distant swarms more like a polysynth. Individual parameters can swarm in different densities. For example the pitches could be very close while the filter cutoffs are far apart. 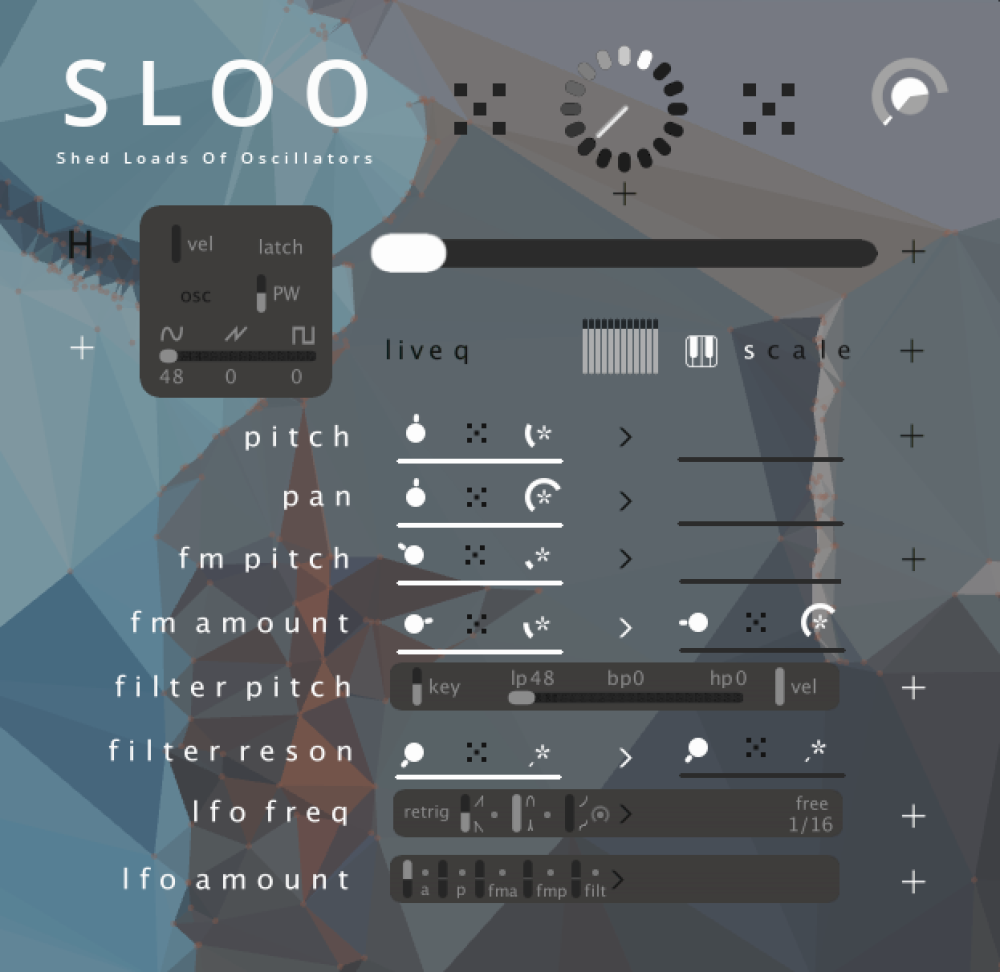 Beyond that you’ll find your typical ADSR envelope and some other adjustments that can be made to the oscillators themselves.

We have a single slider that controls the waveforms for the entire swarm with Sine, Saw and Square waves available. It may have been nice to have a more granular control over the waveforms of the voices in the swarm, but the implementation is nice here. We can slide between the waveform types to create interesting swells and complex interactions via modulation. Due to the way the oscillators are swarmed together, the result of modulating/automating this waveform parameter generates sounds you might not expect from a typical synth and can result in some very interesting patches.

SLOO is developed by live synth virtuoso and instrument/gadget developer Tim Exile. Exile is well known in the synth performance world and has brought much of his live sensibilities to SLOO. You’ll also notice there are essentially two of each of these parameter controls side-by-side. That is because we can essentially have two different states of a particular patch and then smoothly modulate between them using the big Morph fader along the top of the UI. This allows us to move through a massive array of sounds with a single fader/hardware control.

Live Quantize allows us to lock incoming MIDI notes to a master tempo and there is a very cool scale lock feature. We can create 4 different custom scales so our keyboard will only play those notes and then modulate between the 4 of them. However, you can also just play the keyboard in typical fashion. That big H in the top left hand corner essentially holds the last note (chord) you played without you needing to do so physically. Great for sound design and live performance.

There is definitely a major element of randomness in what makes the sounds of SLOO so interesting. Which can be both frustrating and wondrous. But Tim has come up with an interesting way to actually get a handle on the randomness while still embracing the amazing sound possibilities and interesting transitions it creates on its own.

Every time you hit one of the randomize buttons found on each parameter or one of the master randomize buttons along the top (which creates a new swarm pattern for all parameters), the result is stored in the History Wheel. That means we can flip between the last 16 swarm sounds, so to speak, and even automate between them to create tonal movement (and much more) in our parts. We can get it to play a random stored pattern or any series there of using the built-in modulation controls. In other words, we can have the History Wheel flip to a new stored swarm pattern with each MIDI note in our chord progressions, melody, etc. Love this thing.

Here’s a track in its early stages with loads of SLOO all over it and a quick run through of some of the presets (w/ modulation/automation):

It has been a long while since I have got my hands on a virtual synth so unique. At times I still find it a bit hard to control, but the more I embrace the random generators and learn to master the History Wheel, it is becoming more and more practical in song creation.

At this point, just about every major software synth out there attempts to offer it all with endless modulation paths with loads of waveforms following a typical subtractive model in terms sound design. SLOO is clearly a big breath of fresh air in that department. If you’re looking for typical synth patches, look elsewhere. The value here is in getting something new, something that doesn’t sound and work like every other product out there and that isn’t just trying to make the biggest, baddest bass patches.

SLOO can be purchased directly from Tim Exile’s site for £39 or around $48. As far as I’m concerned that is a great price, especially for anyone already invested in the Native Instruments ecosystem. It’s certainly one of the most unique and interesting additions to the Reaktor library out there and definitely worth it for anyone looking to expand their palette of sounds in Logic Pro X.