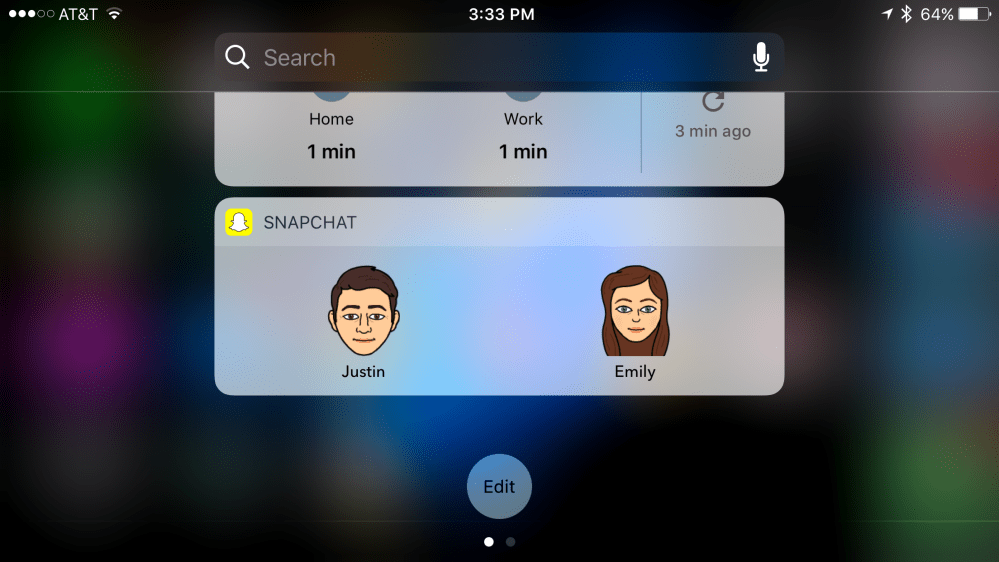 As it continues to expand its reach, Snapchat today is rolling out a new widget to its iOS and Android applications. The new widget allows users to instantly start chatting with a Snapchat fried by simply tapping on their Bitmoji. The move comes as Snapchat puts an increased focus on private messaging, as noted by TechCrunch.

For those unfamiliar, Snapchat quietly acquired Bitmoji and its parent company, Bitstrips, last year for around $65 million. Bitmoji is an iOS app that allows for users to create personalized emoji characters that are heavily integrated into Snapchat.

As you can see in the screenshot above, the new widget from Snapchat allows users to instantly start messaging a friend by tapping on their Bitmoji character. On iOS, the widget is accessible from the “Today” view on the lock screen, Homescreen, and in Notification Center, while on Android it’s a homescreen widget.

To add Snapchat’s new widget on iOS, simply navigate to the bottom of the Today interface, tap “Edit” and look for the Snapchat icon. Once you hit the “+” next to Snapchat, you’ll see the Bitmoji characters of your “Snapchat Best Friends.” Tapping on them will instantly open a messaging thread in the Snapchat app.

The same process applies to Android, but you simply long-press on an empty section of your home screen to add a widget, then choose up to four friends to include. So, you get a bit more customization on Android than on iOS.

Snapchat’s increased focus on messages comes as Facebook tries to play catch up to Snapchat’s Stories feature by adding geostickers to Instagram Stories and expanding its Messenger app with its new “Messenger Day” feature. Snapchat, however, has continued to update and expand its own app with new messaging features, new AR-like features, improved discovery, and much more.