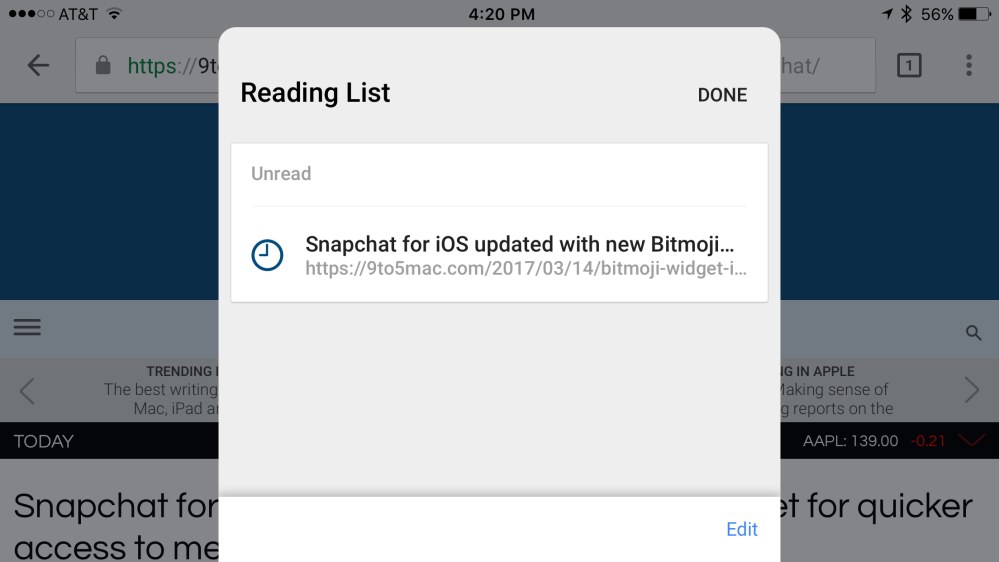 We reported last week that Chrome for iOS would soon gain a new Safari Reading List-like feature, and today that feature is officially rolling out. Google has updated Chrome for iOS to version 57, bringing with it a new “Read Later” functionality.

The concept of Chrome’s new Read Later is nearly identical to that of Safari’s. Here’s how Google describes:

Yes, you can take it with you! If you find an interesting article that you want to read later, tap the Share icon and then Read Later to add the page to your Reading List. Articles on your Reading List are saved on your device so you can read them wherever you are, even when you aren’t connected to the web.

Google says that the Read Later feature saves articles directly to your device, so you can read them even if you don’t have an Internet connection. Additionally, the Reading List interface separates items you’ve saved into “Unread” and “Pages You’ve Read” sections, making it easy to manage everything. This is something that Apple’s own Reading List functionality is currently lacking.

While we had speculated that Google might change the Reading List name as to avoid confusion with Safari’s own Reading List functionality, that didn’t turn out to be the case. Another important thing to note is that Chrome on the desktop currently doesn’t support Read Later, thus meaning any article you save using Chrome for iOS is only viewable from iOS. This is contrary to Apple’s Reading List, which is supported on macOS and iOS.

Google doesn’t highlight any other changes with Chrome 57 on iOS, but the update likely includes the normal set of bug fixes and performance improvements.

Chrome for iOS is available on the App Store and you can download it now to start saving articles to your Reading List.