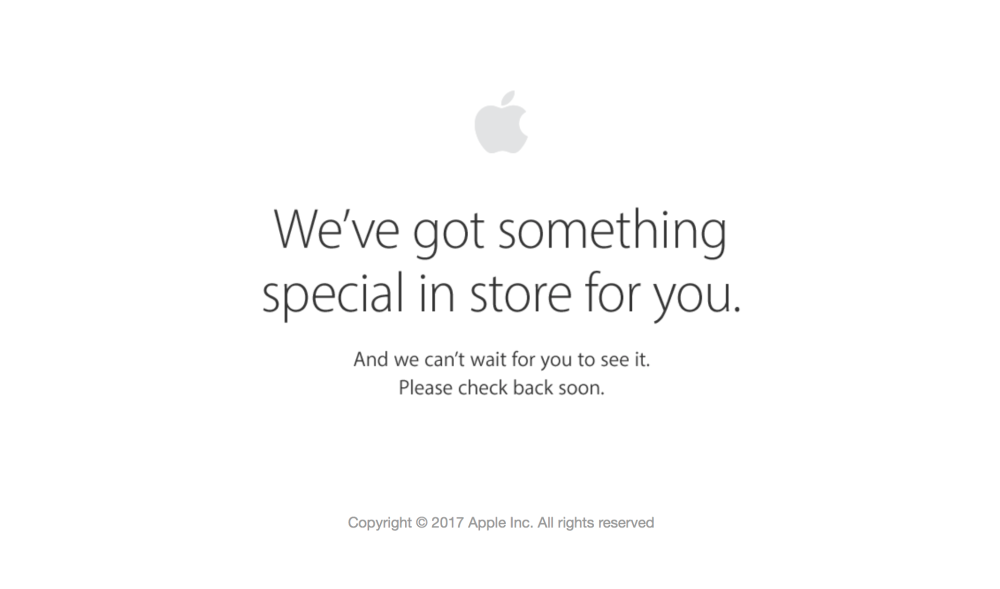 Update: The Apple Store is back. Apple released a new $329 iPad, a PRODUCT(RED) iPhone 7 and iPhone 7 Plus and a new range of Watch bands.

As scheduled on its system status page, the Apple Store is now down for maintenance. Whilst it is still unclear if the downtime is merely for backend server upgrades, many people are expecting Apple to launch at least one new product when the website is available again — as usually happens when the store goes down. Apple has said it expects the store to go back up in about five hours from now.

Leading the rumors, many sources expect Apple to launch new iPad hardware imminently, with updates to the 9.7-inch iPad Pro, 12.9-inch iPad Pro and a new 10.5-inch bezel-less iPad all being reported and speculated …

In the last couple of weeks, there have been several reports about Apple launching new products as early as this week. Apple scheduled store maintenance last night and when the store goes down, it usually returns with new Apple products of some kind. However, there has been no ‘smoking gun’ about which particular new products are getting updates.

There are rumors about Apple readying updates to three iPad products. This includes iterative updates to the 9.7-inch and 12.9-inch iPad Pro, as well as a new 10.5 inch iPad Pro that will apparently be bezel-less. The new 9.7-inch iPad is expected to be cheaper than current models as a ‘budget’ tablet offering.

Whilst it is unlikely that Apple will unveil the new form-factor 10.5 inch iPad without an event, updates to the other two iPad Pro are a definite possibility. We’ll keep our eyes peeled when the store comes back.

There have also been other rumors, outside of the iPad space, although nothing seems like a lock. There have been tentative reports about Apple adding a 128 GB iPhone SE to the lineup, as well as a new red case color for the iPhone 7. It is also about time for Apple to unveil its spring collection of Apple Watch bands.

The Apple Store is scheduled to be down for about five hours, so we’ll see what’s “in store” at about 5.30 AM Pacific Time when the ‘maintenance’ is expected to be finished. Photo Print Products are also offline for maintenance during the same time period as the Apple Store.