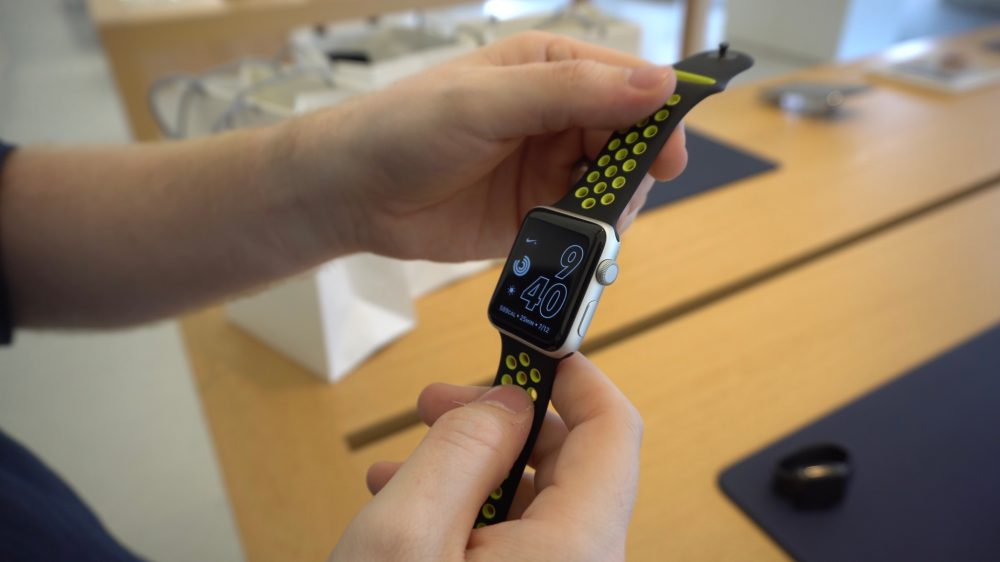 Apple Watch is useful at putting notifications just a glance away on your wrist when you’re not using your iPhone, but that can be a distraction when you’re driving. In a recent Feature Request, we suggested Apple could address this issue by automatically enabling its upcoming Theater Mode feature on Apple Watch when the iPhone detects you’re in the car. Now it appears Apple has something similar in mind…

There are already a few solutions to making Apple Watch take a back seat when you’re driving.

You can use CarPlay which mostly limits alerts to phone calls and messages or driving directions, but you still get fitness alerts on Apple Watch and the display wakes up when you move your wrist.

Do Not Disturb mode disables alerts except from VIP contacts, but the display lighting up from motion is still an issue. Theater Mode is useful because it mutes alerts and prevents the screen from lighting up unless tapped, but you have to manually enable and disable it.

You could also literally toss your Apple Watch in the backseat when you’re driving, but who wants to do that?

Instead, Apple appears to be planning a more intelligent approach. My colleague Jordan Kahn came across a new patent from Apple that describes a scenario similar to what I wrote about in my Feature Request on this topic. The patent was filed last fall and awarded today.

The summary of it is that Apple wants the Watch to determine when you’re driving based on motion detection, then change what alerts are sent, how many you can receive, and where you receive them. Apple even considers which alerts may be too important to hide while driving:

Apple’s description in the patent filing goes on to describe how the feature could be customized by the user or even the car manufacturer. This could let you customize your experience while car makers could choose to route alerts to CarPlay receivers or car speakers instead of the Apple Watch display and speaker.

In some embodiments, the amount and type of notifications prevented from reaching the user may be configured by the user, while in other embodiments it may be controlled by the manufacturer and inaccessible to the user (e.g., to comply with regulatory requirements on driver distraction.) In some embodiments, the wearable device may instead re-route notifications from the device display or speakers to interface elements within the vehicle, such as an in-dash or heads up display or vehicle speakers, rather than preventing notifications from reaching the user.

It’s definitely a good idea and one that solves a real problem with Apple Watch today. Hopefully this is something we see implemented in watchOS 4 and iOS 11 later this fall.