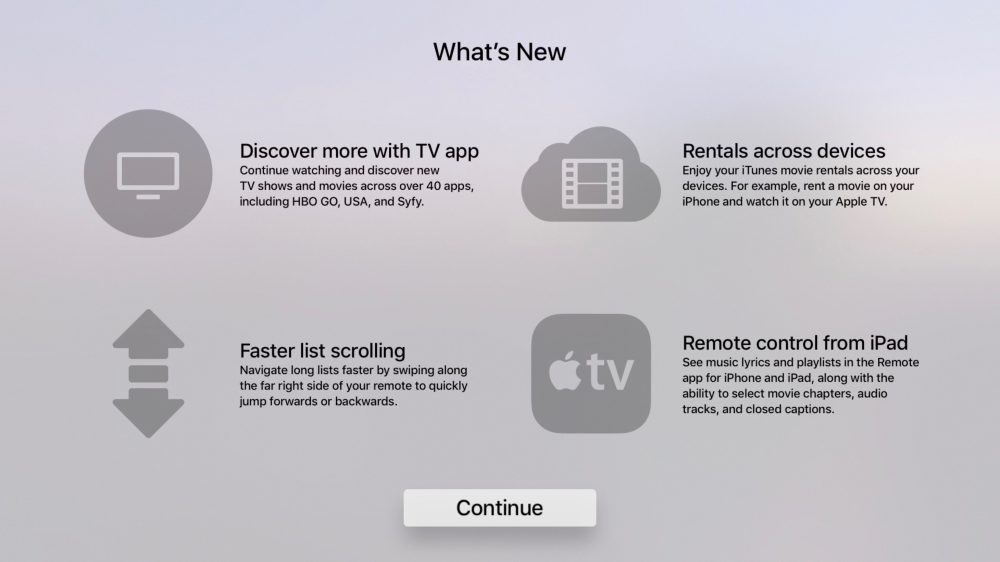 Apple has been beta testing tvOS 10.2 for a while now, but thus far the update has not included any new features. Overnight and this morning, however, some beta users have started to receive a “What’s New” splash screen that lists out a few new features for Apple TV, presumably coming at some point in the future…

See music lyrics and playlists in the Remote app for iPhone and iPad, along with the ability to select movie chapters, audio tracks, and closed captions.

Additionally, there’s indication of faster list scrolling coming with tvOS 10.2. According to the tvOS beta, the Apple TV will soon support swiping along the far right side of your remote for faster scrolling:

Navigate long lists faster by swiping along the far right side of your remote to quickly jump forwards or backwards.

The splash screen also advertises two known/expected features. First is the TV app, which has been available for a while. In this case, its inclusion in “What’s New” is likely meant to push users towards trying the app as it continues to expand to support more video streaming services.

Finally, tvOS 10.2 further confirms that the “Rentals across devices” feature that recently came to iTunes will be supported on tvOS.

Enjoy your iTunes movie rentals across your devices. For example, rent movie on your iPhone and watch it on your Apple TV.