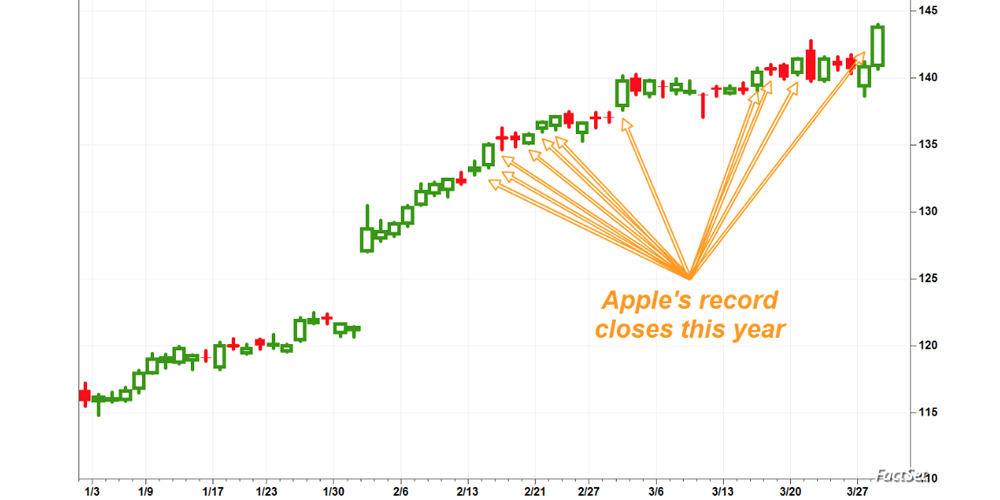 A UBS analyst says that AAPL stock could reach as high as $200/share over the next 2-3 years, as the stock hit its 11th record high so far this year. It has already hit the equivalent of $1,000/share when you factor in the share split.

MarketWatch notes that the stock yesterday set two records: its highest ever value, at $143.80, and its highest intraday price of $142.80. Many analysts are setting high target prices for the stock, and one of them even predicts a possible $200 level, notes Business Insider – though he does add some crucial riders …

“For Apple to hit $200, iPhone needs to continue to grow beyond financial year 2018, new product categories must be established, and buybacks should exceed $50bn per year, boosting the P/E to 17x,” UBS analyst Steven Milunovich wrote in a note distributed to clients on Tuesday.

That ‘new product categories’ catch is, of course, a huge one – but Milunovich is allowing Apple a couple of years to get there as he sees the company moving through three phases.

First comes the “super cycle” later this year, as a redesigned iPhone spurs a bunch of user upgrades, then it shifts to a “sustainable growth phase,” as Apple’s services business throws off reliable annual revenue, and finally, in 2019 and beyond, Apple will move into an “innovation phase” as it chases the next big thing.

While he admits this is an optimistic price, he does believe $175 is realistic.

Milunovich said his most-likely scenario would be for the stock to hit $175, which is 21% above current levels. That would require earnings continuing to rise, “but at a slowing rate,” as iPhone sales stop growing, new products have just moderate success and margins turn flat.

He does, though, have a third, pessimistic scenario in which the stock value could fall.

He also envisions a third scenario, in which the stock falls to $125, which is 14% below current levels. In that world, iPhone sales turn negative and material innovation proves difficult.

So, AAPL will either rocket in value, climb well or fall. Got it.

But while UBS may be an outlier, a roundup of 47 analysts by Yahoo Finance shows just one rating the stock a sell, ten rating it a hold and 36 calling it either a buy or strong buy.