While Spotify may lead in terms of subscribers, it’s already been proven that Apple Music can dominate even with its smaller user base. A new report from analytics firm Verto further highlights the sometimes underestimated reach of Apple Music.

The report shows that Apple Music comes out on top in terms of monthly unique users, thanks in large part to the three-month free trial Apple offers.

The data from Verto says that Apple Music attracted 40.7 million unique users during the month of February in the US, putting it well ahead of Pandora at 32.6 million unique users. Spotify rounded out the top three, coming in with 30.4 million unique users. Coming in fourth is iHeartRadio, while the struggling SoundCloud places fifth. These numbers include mobile users only, meaning they are likely higher if you take into account desktop.

Vetro explained to TechCrunch that how Apple Music was able to bring in so many unique monthly users centers around the three-month free trial that Apple offers. The analytics firm says that the free trial more than doubles the amount of people who use Apple Music in the United States.

This is an interesting tidbit of data for a number of reasons. For one, it really exemplifies just how big of a benefit Apple Music has by coming pre-installed on all iOS devices. Furthermore, it represents the potential for growth that Apple’s streaming music service still has. 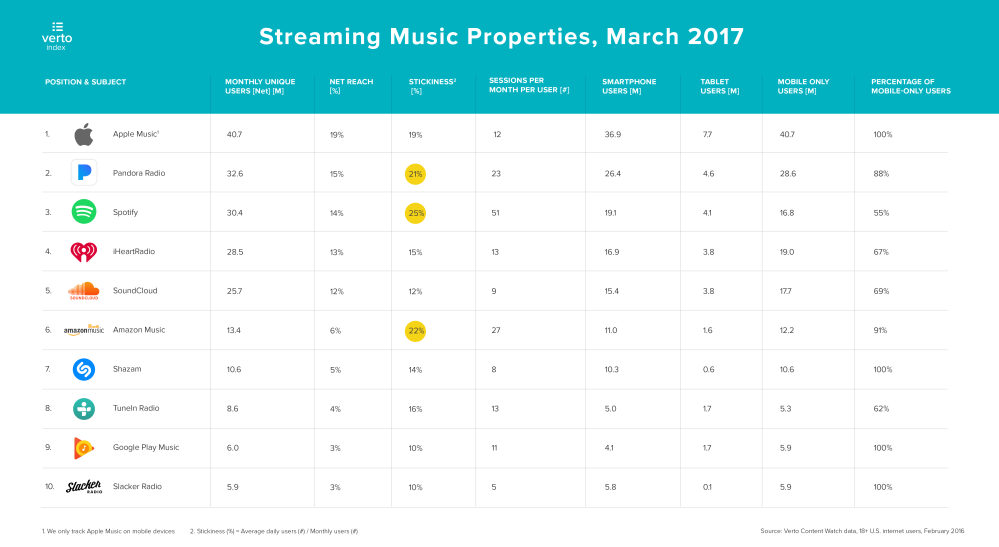 Most recently, Apple stated that Apple Music has “well past” 20 million paying subscribers worldwide. Today’s data from Verto claims that, in the US alone, Apple Music saw over 40 million unique users, presumably the majority of whom were free trial customers. Spotify, on the other hand, recently touted that it has 50 million paying subscribers worldwide, while it also has over 100 million users on its paid + free tiers combined. Nevertheless, Apple Music still outperformed Spotify in terms of active users in the United States.

What this means for artists specifically is that if they’re looking for the best platform to go to with exclusive content, or content in general, Apple Music has the broadest reach. This is especially notable considering Apple pays artists during that three-month free trial.

A lot has been made about the success of Apple Music and Beats 1, but information like this highlights how Apple’s large user base gives it an automatic leg-up compared to its competitors.