EduTech is a 9to5Mac weekly series that focuses on technology’s application in education, lower and higher level, both for productivity and enjoyment. If you have suggestions for topics or specific questions you’d like to see answered, feel free to let me know. Catch up on past installments here.

In this week’s installment of EduTech, we’re going to highlight a new app from Squirrels, the developer team behind popular apps such as AirParrot and ClassHub. The company this week is out with AirParrot 2 for Chrome OS.

Essentially, what AirParrot 2 for Chrome OS does is seamlessly integrate a Chromebook-based classroom with the Apple TV…

The company explains that many classrooms today are a mix between Chromebooks and iPads, though Chromebooks by far hold the lead. By integrating Chromebooks with the Apple TV, AirParrot 2 for Chrome OS allows students, regardless of device, to share and present their work on the big screen.

By default, Chromebooks do not come with any sort of Apple TV support, for obvious competitive reasons. AirParrot 2, however, enables real-time sharing and collaboration for Chrome OS users. It additionally cuts costs for educators as they no longer need to be equipped with a Chromecast and an Apple TV to handle student presentations.

AirParrot 2 for Chrome OS software runs on Chromebooks and allows teachers and students to wirelessly present their device screens to Apple TV. Chromebooks do not come pre-equipped with this ability.

Once a student is connected to the Apple TV, they’ll see their username appear on the screen which helps make it clear who is presenting, while also acting as a deterrent for streaming any sort of inappropriate content. 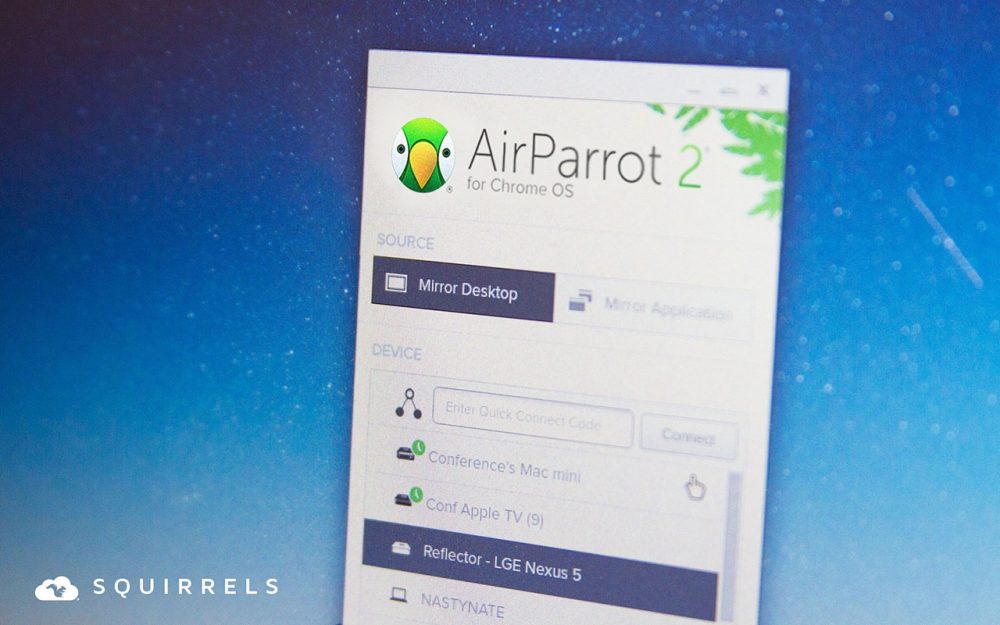 The ability to have students seamlessly share content in front of a class is invaluable in education. For many schools, this is handled by having students individually log in to a computer connected to a projector, then load up their presentation. This is a time-consuming and cumbersome process. With AirParrot 2 for Chrome OS, however, schools can implement wireless sharing for users of all devices in a quick and easy fashion.

As I noted a few weeks ago, Apple is quickly falling behind to Chromebooks in education, but tools like AirParrot 2 for Chrome OS ensure that the company can still have some sort of hand in education, even if it’s not supplying all of the devices. The full press release can be read below and AirParrot 2 is available on the Chrome Web Store.

Check out previous installments of EduTech:

AirParrot 2 for Chrome OS software runs on Chromebooks and allows teachers and students to wirelessly present their device screens to Apple TV. Chromebooks do not come pre-equipped with this ability.

“As Chromebooks continue to gain market share in K12 education, it’s important to ensure compatibility with existing classroom technology,” Squirrels co-founder Andrew Gould said. “Chromebooks now account for 58 percent of new device deployments, but there are still a lot of Apple TVs in classrooms. AirParrot for Chrome OS enables screen-mirroring between those devices to increase classroom sharing and collaboration.”

“Many school districts today have mixed-device classrooms with iPads and Chromebooks,” Gould said. “AirParrot for Chrome OS ensures that classrooms don’t need to be equipped with both an Apple TV and Chromecast for presentations. Keeping everything consistent with one receiver that’s compatible with all devices saves valuable class time.”

Using AirParrot 2 for Chrome OS is simple for educators and students alike. A user opens the app, selects which AirPlay receiver they want to mirror to and clicks connect. Users can choose to mirror their entire Chromebook desktop display or just a single tab.

“Students and teachers no longer need to carry Chromebooks across the room to manually connect to the primary classroom display,” Gould said. “Screen-mirroring technology eliminates the need to search for the correct input or locate the correct cable.”

Once a Chromebook user begins mirroring, the username appears on the screen so the class knows which student is presenting to the Apple TV

“Showing the username when connecting eliminates confusion and acts as a deterrent for users who might want to stream inappropriate content in front of large groups,” Gould said.

In addition, AirParrot 2 for Chrome OS is compatible with Squirrels’ Reflector software, which runs on teacher computers and is used in over 100,000 classrooms worldwide.

AirParrot 2 for Chrome OS is available in the Chrome Web Store for $4.99 and is free for all AirParrot for Chrome OS customers. Education licenses and bulk licensing options are available through the Squirrels sales team.