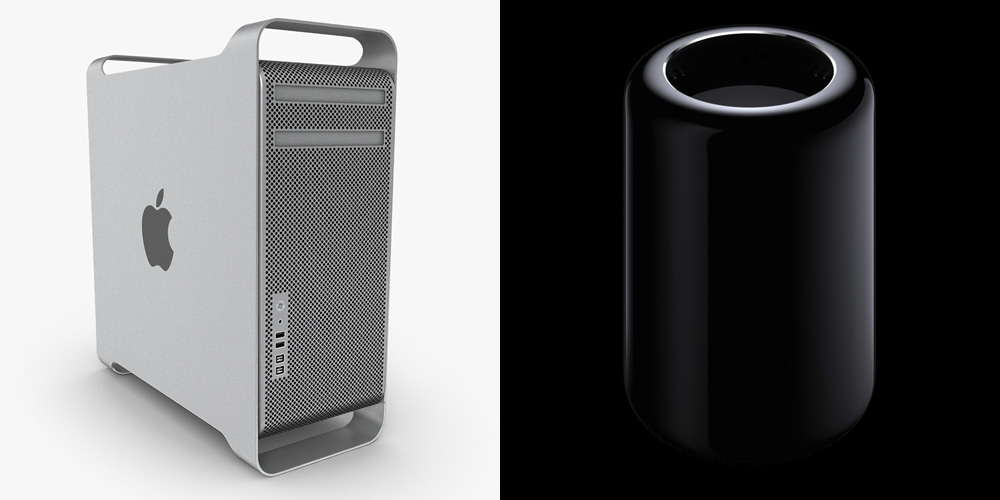 Apple is famously one of the most secretive companies in the world. It believes in what Steve Jobs called the ‘magic’ of the surprise reveal. The ‘one more thing’ presentation style pioneered by Steve is so much a part of Apple’s DNA that it has a stock phrase it uses to answer questions about its product plans: ‘We do not comment on future products.’

It’s hard to imagine Apple would ever take a different approach. Today it did.

It not only revealed future product plans a year in advance – something so out of character it’s hard to believe it really happened – but it also did something else Apple almost never does: it admitted to a mistake.

Sure, none of the three Apple execs present ever used that word, but the mea culpa is clear …

Schiller: “As we’ve said, we made something bold that we thought would be great for the majority of our Mac Pro users. And what we discovered was that it was great for some and not others. Enough so that we need to take another path. One of the good things, hopefully, with Apple through the years has been a willingness to say when something isn’t quite what we wanted it do be, didn’t live up to expectations, to not be afraid to admit it and look for the next answer.”

The very fact that Apple felt compelled to hold this meeting in the first place is evidence of just how much it thinks it screwed-up here. The company that has always taken the view that ‘people don’t know what they want until you show it to them’ has clearly had to face the fact that, in the pro market at least, that’s not the case.

Apple does still have its own take on what sort of tech does and doesn’t make sense. Despite the wow that greeted the Microsoft Surface Studio Pro touchscreen desktop, Apple isn’t being swayed on its belief that touchscreens are the wrong interface for computers – as TechCrunch noted, albeit with a half-joke that some Apple customers may not fully enjoy.

Schiller replies “No. That’s a whole other long discussion we can get into, but suffice it to say, it’s not a big need of the Mac Pro customers that we’re trying to address,” he says […]

Federighi suggests that making the iPad Pro, which they feel has a better drawing experience, work better with the Mac is the answer. “We recognize customers often [use both] — we all certainly use both — so we’re really focused on making them work well together,” he says. “Because we think in many tasks, that’s actually the best solution. So all of our customers should feel free to buy multiple products,” he jokes, laughing. “We encourage that.”

But many pros faced a triple disappointment over the Mac Pro. First, for a long time, it seemed as if Apple had abandoned the pro desktop line altogether. Second, when it did finally launch a brand new model, many considered that it favored style over substance. A pro machine with limited ability for internal expansion did, many argue, miss the whole point of a pro machine. Third, Apple’s apparent disinterest in the line resumed when it barely saw any updates since it was launched.

To make matters worse, the lack of any information about if or when the machine might ever see future updates left many pros in limbo. This was the point I made last year.

The problem is that, without knowing whether the Mac Pro has a future, it’s really difficult for a pro user in the market today to know what to do. Do they buy a three-year-old machine which, in most respects, is still faster [than the 2016 MacBook Pro]? Do they wait for a possible new Mac Pro model next year? Or do they conclude that the MacBook Pro range is the future of professional-grade Macs and make the switch now?

What would be really helpful is for Apple to at least assure customers that the Mac Pro has a future, and to tell us when a major upgrade can be expected.

Apple said that it expected the machine to be upgraded externally, with Thunderbolt peripherals. That vision never materialized, as the company now admits.

Apple has today not only provided the reassurance and timescale I asked for, but has also announced a complete U-turn on the whole ‘small machine, external upgrades’ philosophy. It appears to be returning the Mac Pro to its pre-trashcan roots: as a (still beautiful) box with plenty of room inside it for internal expansion.

I’m all in favor of Apple making beautiful devices, but where the Mac Pro was concerned, I had to agree with those who said it was form over function. The Mac Pro, by its very nature, would instantly be hidden inside a rat’s nest of cables leading to all the external devices you’d need to connect to it to allow it to do the job for which it was designed. The aesthetic appeal would be instantly lost the moment you actually started using it.

That approach seemed all the more perverse when Apple made its now-reversed decision to exit the display business. Why make a beautiful desktop box no-one will ever see while expecting us to use ugly monitors that we would not only see but, indeed, stare at all day, every day?

The LG UltraFine 5K display may have been well-specced, but nobody described it as beautiful. Sure, professional users want great specs, but those who work in visual fields especially – and many of us who don’t – also appreciate beautiful aesthetics. A grey lump with an LG logo doesn’t qualify.

So there’s good news too for those of us waiting to upgrade to a 4K or 5K monitor that matches the aesthetics of what still feels like a shiny new MacBook Pro.

But it’s not just great news for those planning to buy the next Mac Pro or Apple Display – it’s also good news for all Mac fans. Just yesterday I disagreed with Neil Cybart’s analysis that all the cues from Apple pointed to it selling iPads as the future of computing while losing interest in the Mac. My own view, I said, was that “the Mac will remain part of Apple’s product line-up even as iPad sales grow.”

My evidence for this was relatively generic words from Apple execs – Schiller among them – about the longevity of the laptop category and more exciting Mac products to come. Cybart argued that actions speak louder than words, and I was forced to acknowledge that as a fair point.

Today, however, the evidence is very firmly on my side. If Apple is putting this much work into a ground-up redesign of its most niche model, that’s a very concrete expression of its commitment to the future of the Mac. Even all desktops combined only account for 20% of Mac sales, said the company, yet Apple also confirmed that there are more powerful iMacs to come too, and even the venerable Mac mini will live to fight another day.

I’m not in the market for a Mac Pro – I’m still very happy with my 2016 MacBook Pro – but I’m every bit as delighted by this news as those who are.