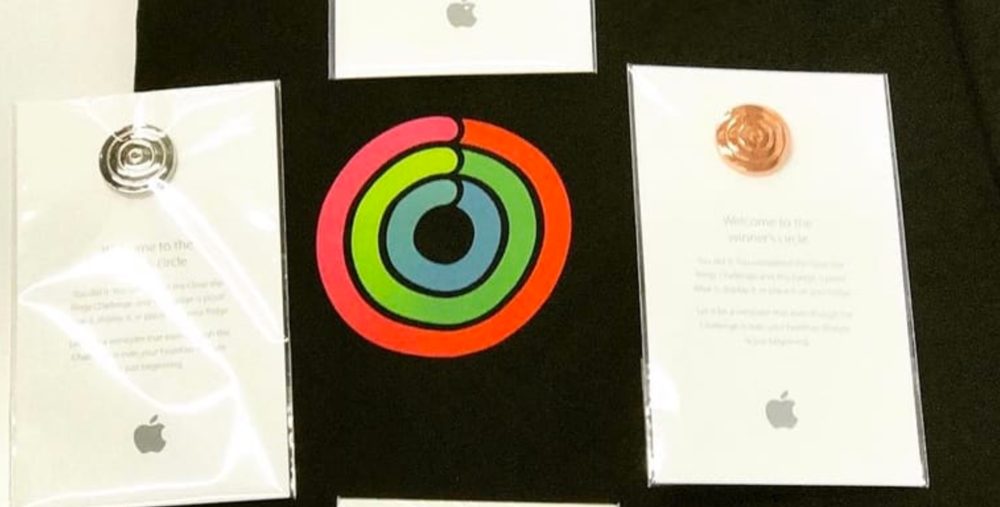 Apple has placed a heavy focus on the Activity functionality of Apple Watch, using it throughout its marketing for the device and encouraging users to take advantage of it with challenges and sharing. Internally, however, Apple has taken things a step further and has been running a #CloseTheRings competition, offering free physical goods such as t-shirts and pins.

As detailed in a report from French website WatchGeneration, Apple has internally organized a program offering retail and corporate employees physical rewards for filling their rings. It’s unclear when the program started and how often it is run, but Apple has recently been sending employees rewards for their involvement.

Over the past few days, images have popped up on Instagram showing rewards such as t-shirts and different color pins. There appear to be three different levels of rewards as part of this program – bronze, silver, and gold. The t-shirt employees have received show an image of filled Activity Rings on the front and an Apple logo on the back.

The program was organized internally and consists of 40,000 retail and corporate employees. It’s unclear, however, as to how many employees have been rewarded with a pin or t-shirt.

The promotion is being run through the iOS app Challenges, developed by FitNow, a long time proponent of wellness and fitness. Apple employees have a unique code that they must enter in order to join the competition.

The app is similar to the social component of the Activity app, with rankings and challenges between friends based on earned points. And of course, there is a reward at the end, in addition to the trophies …

The t-shirts and pins received by Apple employees will no doubt become a hot item among Apple collectors. It’s also unclear as to just how rare these shirts are and how rare they’ll stay, as Apple may continue the program through the coming months.

View some images of the goodies Apple employees receive as part of the promotion in the Instagram posts below. Let us know if you’ve seen any of these in the wild down in the comments.