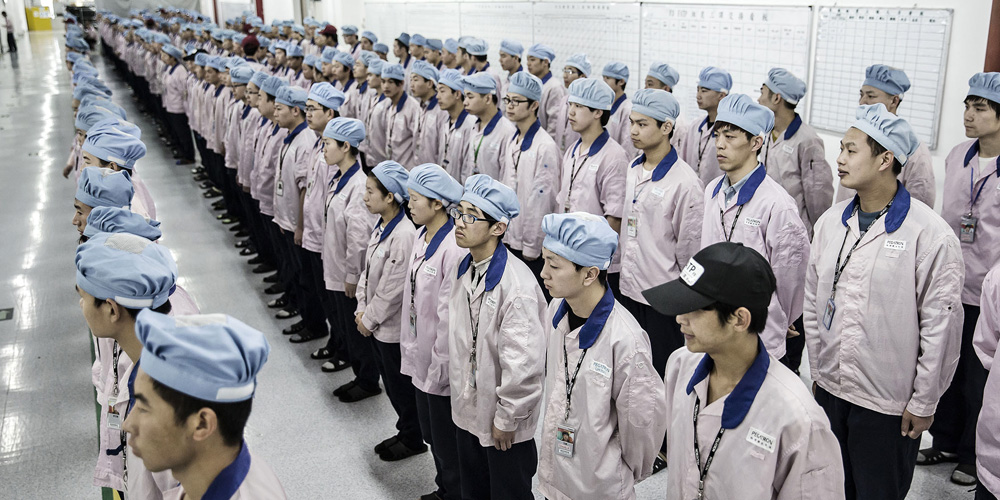 You might expect an NYU student to seek out a summer internship doing something more interesting than spending 12 hours a day inserting a single screw into an endless production line of iPhones, but Dejian Zeng did exactly that for his summer project.

He wanted to find out what life was like for workers in an iPhone factory, so spent six weeks as a Pegatron worker in a facility on the outskirts of Shanghai. He reported back on everything from the sleeping patterns to the need to download apps to qualify for free Wi-Fi access in the dorms …

In an interview with Business Insider, Zeng said that the typical working day, including overtime, short breaks and security checks was about 12.5 hours.

The overtime is theoretically voluntary, Zeng says, but not so much in practice.

The overtime thing, from my experience, it’s involuntary. You can’t leave easily. And then every time you ask, “Can I leave?” they would just say, “You have to work on the assembly line.” And so you know that every station needs to have somebody doing it. And if you leave, who is going to do it?

Even where workers actively seek overtime, he says, that’s due to financial pressure.

Sometimes you hear about a worker who demands that “I want to work overtime. I want that money.” But they are being pushed to that path because the base salary is just too low. I can’t make a living without doing overtime, that’s why I “volunteer,” quote unquote, to do that. The factories know it also. The workers, too. They know that when you get into the factory, you need to do overtime to get your payment.

Apple told BI that it requires its suppliers to limit working weeks to a maximum of 60 hours, and that audits – including no fewer than 16 at the factory where Zeng worked – showed 99% compliance. In its most recent Supplier Responsibility report, Apple said that compliance across its supply chain was 98%. Zeng says he suspects Pegatron has a way to hack the audits, but he doesn’t know how.

Pegatron was, though, very sensitive when Apple staff were visiting.

Pegatron was serious about safety training, he said, because Apple monitored it carefully. But the company had a simple way to deal with tiredness.

When the subfactory’s leader comes, they say, “Listen, are you pregnant? Raise your hand.” And then nobody did. And then he said, “If you think you are going to be too tired standing up, you can come up to me now.” […] And then nobody stood up. The reason […] is that if somebody stood up, they lost their job.

He claimed that because Apple monitored worker evaluation of the company’s training, workers were told they had to rate the quality highly.

It was a scale where one was the worst and five was the best. They said we could do four or five. And so everybody did four and five, and they submitted it.

Zeng also said that opportunities for education and training were in practice limited by the hours people work.

In the new report, they said a lot of workers get opportunities for training in some programs — they can develop their careers and stuff like that. But when you are working 12 hours, you are exhausted. And the only thing you want is some rest, and there’s not enough time for that.

When it comes to time off, workers have access to Wi-Fi in the dorms where they live eight to a room, but need to either pay for it or download apps to qualify for free access.

To access the Wi-Fi, you need to do something. You need to either download some apps for them or click something — comments or something — to earn some virtual coins.

You use the coins to get on the Wi-Fi. Twenty-four hours is 20 coins. And then downloading apps sometimes are like 20 to 30 coins or something. So is it you can buy coins — like I remember it’s like 100 coins about 5 yuan, something like that. But a lot of people just keep downloading. It’s like a business. You need to need to do that to get access to Wi-Fi.

The obvious suspicion here is that the system is being used to inflate download numbers for apps, presumably in return for payment to Pegatron.

The work is repetitive, he said. At first it’s hard to keep up with the speed of the production line even carrying out a simple task, but eventually you can do it with your eyes closed. One of his jobs, he said, was to put a single screw into the speaker on the case.

The first couple of days you’re very concentrated because you couldn’t catch up the speed of the assembly line. You need to be very quick to catch up. So you’re very, very focused. It makes you very tired, but it keeps your mind on it. You have no time to think about things. I need to get quicker and quicker.

And then, after awhile, you get more familiar to it, and that in the end, I can even do this screw by closing my eyes.

Workers are not allowed to bring electronic devices into the factory, so they cannot alleviate the boredom by listening to music or podcasts.

He said that production of pre-production iPhones was easier but especially boring because of the slow pace. He worked on a trial production of the iPhone 7.

Because one day for 12 hours, you only produce five phones. You sit there and have nothing to do, waiting for two hours. Sometimes they don’t allow you to speak. You just sit there quietly and have nothing to do, and wait until the next phone comes in. You’re trying to assemble it, and then you put it back and you wait for another few hours for the next one to come in.

Zeng said that stories of the pay being really high by local standards weren’t true – the role was equivalent to being a security guard or housekeeper – but it is easy work to get.

Because you need no skills, you just get into the factories. They don’t even ask you any questions. During the interview, you can just get in that day. And then they take care of your meals and your dorm.

Zeng also joined the many people casting doubt on the idea that Apple could bring iPhone production to the USA.

Chinese people are getting 2320 yuan, which is about $400 per month. How much are you going to pay for the US workers in terms of base salary?

If it really happened, if factories actually really moved to the US, I won’t see it create a lot of jobs. I would see workers getting replaced by a lot of machines, because a lot of the work I see in the factory can actually be done by machine. The only reason why we do it is because the labor is even cheaper than the machine.

The whole piece is worth a read.