Drone Diary: new iPad, new firmware, and some new uses for the drone

When I finally gave in and bought a drone, the DJI Mavic Pro sold itself to me primarily on its portability. This was the first drone on the market that combined the ability to shoot high-quality footage with a form-factor that made it sufficiently portable for handbaggage-only travel.

I used it on weekend trips to both France and Portugal, as seen in my original review video. Sadly, it didn’t get to accompany me on a holiday in Havana. Doing a little research found that the Cuban government takes a dim view of anyone flying drones anywhere around the capital of Havana, where we were staying, so I had to leave it at home.

I have, though, found a couple of unexpected uses for it which I’ll get to shortly …

It’s a given that, no matter when you buy a gadget, it’s only a matter of time before a new and better model is released. In the case of the Mavic Pro, that’s the Platinum model. Fortunately, this was a relatively minor update, so I’m not suffering too much envy of the new toy. It offers more battery-life, and quieter noise levels.

Battery-life hasn’t proven an issue for me. I’ve always felt that I had enough for any individual flight, and because I bought the Fly More combo, I have two spares that adds up to around an hour of real-life flying.

Similarly with the noise levels. Although the drone sounds noisy at ground level, I’ve always been surprised by how quickly it becomes almost inaudible at any height above 30 feet or so.

That said, if I were buying today, I probably would lay out the extra $100 for the Platinum edition, because once you’re spending that kind of money you might as well have the best you can get.

I did hit a couple of small speed-bumps with my own setup. The first was my upgrade to the 10.5-inch iPad Pro. The DJI tablet holder I was using was designed for a 9.7-inch iPad, and the new one was technically just a little bit too big.

I was able to squeeze it into the holder, but it did underline that upgrading to a new size of iPad – even if the difference in external dimensions is small – can mean added cost if you have a number of cases and accessories.

The second was firmware. DJI releases new firmware fairly frequently, and the latest update was a sizeable one. This took almost 25 minutes in two batches, so in hindsight doing this shortly before leaving wasn’t the best idea – especially as you can’t interrupt it once it’s underway.

One of the things DJI is doing in the latest update is cracking down harder on illegal flying. Previously, if you were within controlled airspace (where you cannot legally fly without permission from the Air Traffic Control service), you were warned and then offered the option of ticking a box to say that you had the necessary permission. Predictably, this option was abused, and there have been a number of examples of idiots flying drones close to airports.

To prevent this, the app now refuses to take off in areas where you shouldn’t be flying unless you email DJI in advance with proof of your permission to fly. The company can then unlock the appropriate airspace for your individual drone.

While no-one can argue with stopping morons flying drones into aircraft flight-paths, this tighter restriction can be a pain. For example, there is a small regional airport whose airspace covers an area outside London in which I like to fly. The airport tower has been very helpful: I simply phoned them, explained where I wanted to fly, at what height and for how long. Because I was well below the altitude at which I was going to come into conflict with aircraft, they readily granted permission. This kind of informal on-the-day arrangement will no longer be possible.

However, there does seem some common-sense built into the system. For example, while the whole of London is covered by controlled airspace extending all the way from the surface, you clearly wouldn’t be putting aircraft at risk by flying in parkland below the level of surrounding tree-tops and buildings. The drone does still fly at up to 30 metres in height provided that you don’t fly it more than 50 metres away. This restriction still allows sensible use.

One of the reasons I waited a long time before buying a drone was concern that the novelty might wear off very quickly, and an expensive piece of kit might end up gathering dust in a cupboard.

When the Mavic Pro came out, I decided that as it was small enough to accompany me on trips, that was all the mattered. I wouldn’t mind if it was only used a few times a year on holidays and weekends away, as that would be enough to justify its existence.

For the most part, that’s exactly what’s happened: I very rarely use it in the UK. However, it has proved useful on occasion. It’s always a winner with kids, for example, and I have taken my life in my hands and let some family offspring have a little play. But there have also been a couple of times when it proved to have practical value.

The first was when friends bought what is best described as a project house. It had been abandoned many years ago, with something of a Marie Celeste vibe inside in the form of abandoned cans of food, clothing and even photos.

Their plan was to either restore the existing house, or build a new one on the same land – but either way they wanted to use the extensive grounds to build a couple of new eco-homes. These would be built to Passivhaus standards, where little to no artificial energy is used to heat or cool the home.

Getting planning permission for this should have been straightforward, as the land was already designated residential, and planning authorities are receptive to environmentally friendly buildings. However, there was concern about them potentially destroying landscaped grounds. They needed an easy way to demonstrate to planners that what may once have been beautiful gardens was now a jungle, complete with a ramshackle collection of outbuildings.

The drone proved to be the easiest way to do that. I simply flew it up to 100 feet or so and took the overhead photo above, along with some video footage over-flying the land. This did the job. 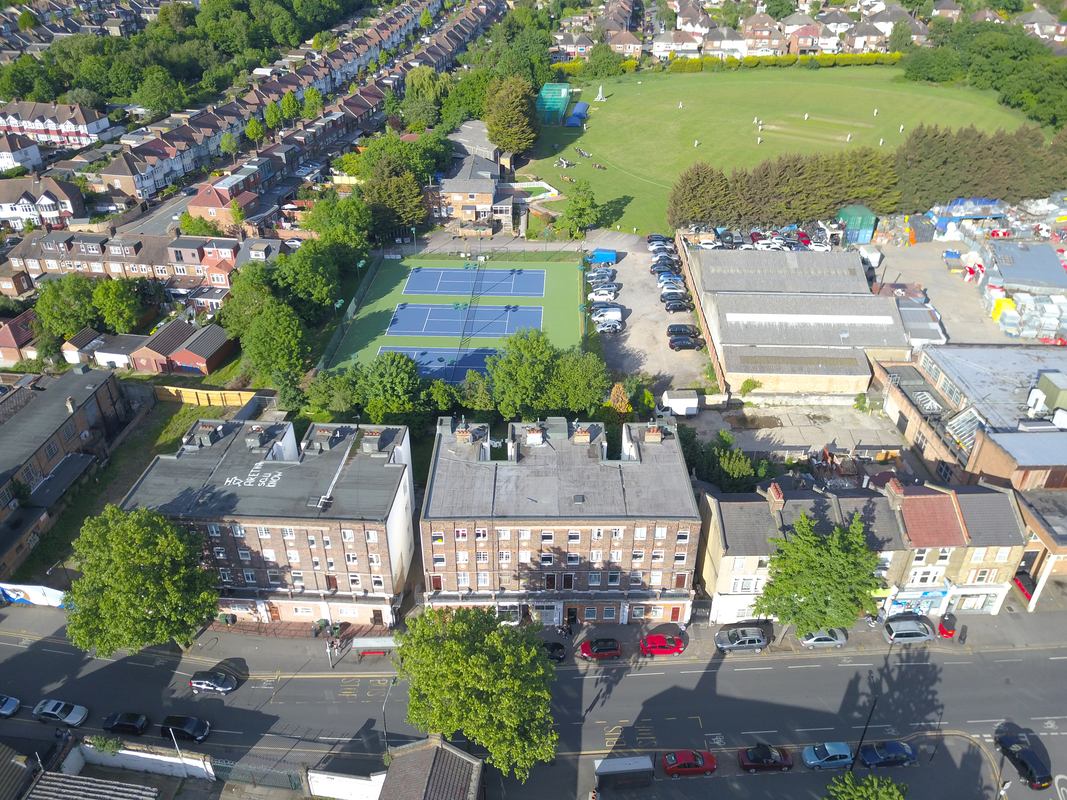 Second, when it came to selling a flat, the drone really helped. Not only did it provide an eye-catching photo, but video footage was a great way to show some of the facilities in the local area.

A view from the air is a particularly effective way to illustrate that even the most densely-populated areas of London have a surprising amount of greenery.

I would still like to use the drone more for creative projects. I really enjoyed the dance video I shot, and would like to do more of that kind of thing – I just need to create the time for it.

If you have your own drone and have found some non-obvious uses for it, do share them in the comments.