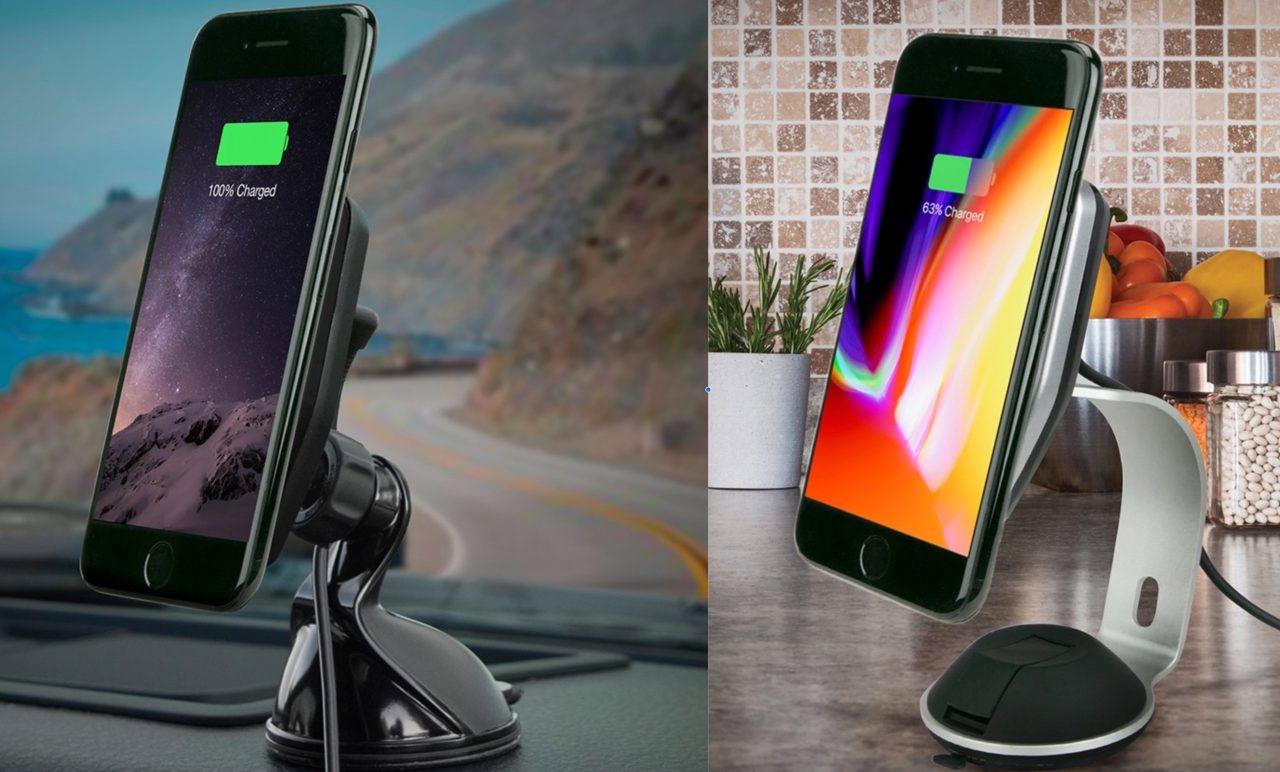 Popular accessory maker Scosche has today unveiled a new line of Qi charging mounts on the heels of Apple’s iPhone 8 and iPhone X announcement. The company has announced a trio of new products in its MagicMount Charge line of charging docks, as well as a pair of separate in-car solution for wireless charging…

The first MagicMount Charge dock (model number MPQWD) is designed specifically for in-car use and features a 12V car charger connection on the opposite end. It mounts to the dash of your car via a suction base.

Next in the MagicMount Charge series is the MPQOHM dock. It’s largely the same as the aforementioned car mount, but instead of the 12V car charger, you get a standard wall AC adapter. It features the same suction “StickGRIP” suction base.

Rounding out the MagicMount Charge products is the MPQHC, which doubles as a home/office mount as well as a car mount. You’ll get both an AC wall adapter as well as the 12V car charger with this package.

Introducing MagicMount™ Charge, Qi Wireless Charging Magnetic Mounts for vehicles and home/office. The MagicMount Charge combines the magnetic mounting effectiveness of the #1 Mount Brand in the U.S. with the latest Qi 15W wireless charging technology to allow you to mount and charge Qi-enabled smartphones, cases, receivers, transmitters and battery covers without the need to connect your device to the charger via a USB charge and sync cable. Experience the freedom of wireless!

Finally, Scosche has unveiled two additional car mounts with wireless charging built-in. There’s the StuckUp window/dash mount that features a suction base and can be used on either the front window, or the arm can be rotated and used on the dash. Then there’s the VentMount charger that “safely secures your mobile device to your vehicle’s vent.” Both of these options cost $49.99.

Scosche hasn’t yet revealed pricing information for the MagicMount products, but the company says they’ll be available in October. They all support the Qi standard and allow users to charge their Qi-enabled devices, including the iPhone X and iPhone 8, at 15W of power.

Check out Trevor’s full roundup for some of the other top wireless charging accessories for the new iPhone 8 and iPhone X.