Review: OWC Thunderbolt 3 Dock adds 12 I/O ports and charging to MacBook Pro with a single cable at your desk

The promise of Apple’s USB-C laptop future is expandability, versatility and flexibility. Plugging in single-device dongles for USB and HDMI is a stop-gap, but is wasting the potential of the port.

The OWC Thunderbolt 3 Dock ($299) better fulfills the idea: one port, one cable, provides power and a multitude of inputs and outputs like normal USB, a 3.5mm jack, SD card, mini DisplayPort, Ethernet and more. It isn’t perfect, but I’ve been using it for months now with my MacBook Pro and it adds so much convenience and utility. Read on for my full review …

I work at a desk. I use a portable laptop as my main work machine for the occasional time I want to get stuff done on a trip but it spends the vast majority of its life stationary on that desk. I have an external display, keyboard and mouse that I use in concert with the laptop’s screen and trackpad throughout the day.

Whilst the keyboard is wireless, the display and mouse need wired connections. As an iOS developer, I also spend a lot of time with my phone plugged in to the MacBook via a Lightning cable for testing and debugging.

The 15-inch MacBook Pro has four USB-C Thunderbolt 3 ports. In a ‘traditional’ setup, one would be taken up for the power adapter, a second would be attached to a HDMI dongle for the display, a third would have a USB dongle for the mouse and the last port would be used up by the USB-C to Lightning cable for the iPhone.

That typical arrangement would be an awful lot of messy cabling and dongles. I would also have no ports leftover if I ever needed to use them (like plugging in an external drive). When I finish work and take my laptop into the living room to relax a bit, there’s a lot of stuff to unplug and promptly fall of the desk and drop to the floor, tangled.

The dock offers a lot of convenience and addresses all of these problems (admittedly, first world problems). I treat the dock as a fixed desk accessory whilst the laptop can be moved around. This means everything can be plugged into that and it doesn’t matter if I want to go work in my bedroom one afternoon. 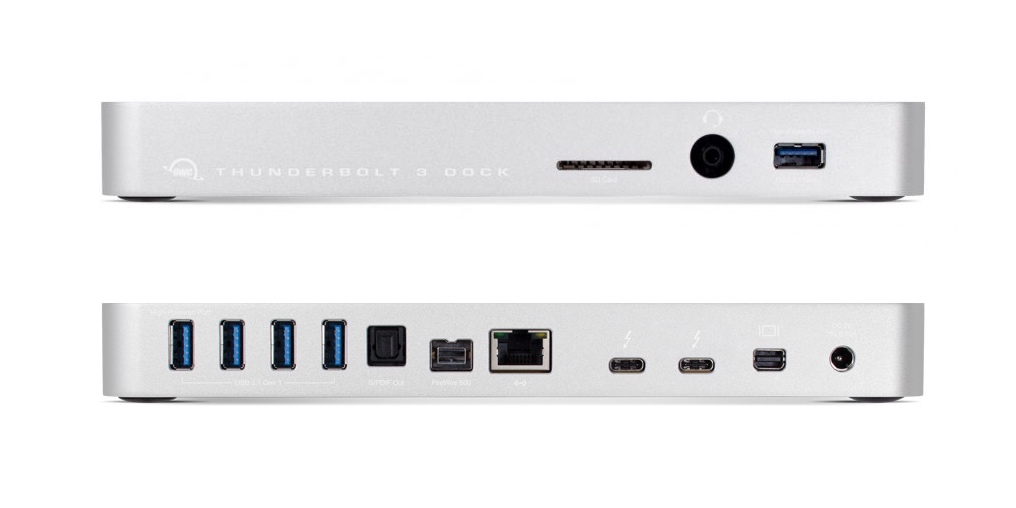 Thanks to the Thunderbolt 3 bandwidth, the OWC dock connects with a single cable to the MacBook Pro. One cable to connect when I sit down and one cable to disconnect when I get up. Moreover, because the dock exposes I/O ports, I don’t need to worry about intermediary dongles. The peripherals plug into the dock directly.

On the front of the dock, there is an SD Card slot, a 3.5mm headphone jack, and a USB-A 3.1 port. The rear side features 4 more USB-A 3.1 ports, digital audio out, FireWire 800, gigabit Ethernet, two USB-C Thunderbolt 3 ports, mini DisplayPort and the power input for the brick. (Note that one of the Thunderbolt 3 ports is always in use, connected to the other end of the cable that is plugged into the laptop itself.)

With my complete setup, I have three Thunderbolt 3 ports to spare on the laptop itself and many of the ports in the dock are also free, which I see as good future-proofing in case I have to incorporate new devices in the future. If I had two external displays rather than one, for example, I could use the USB-C port on the dock. 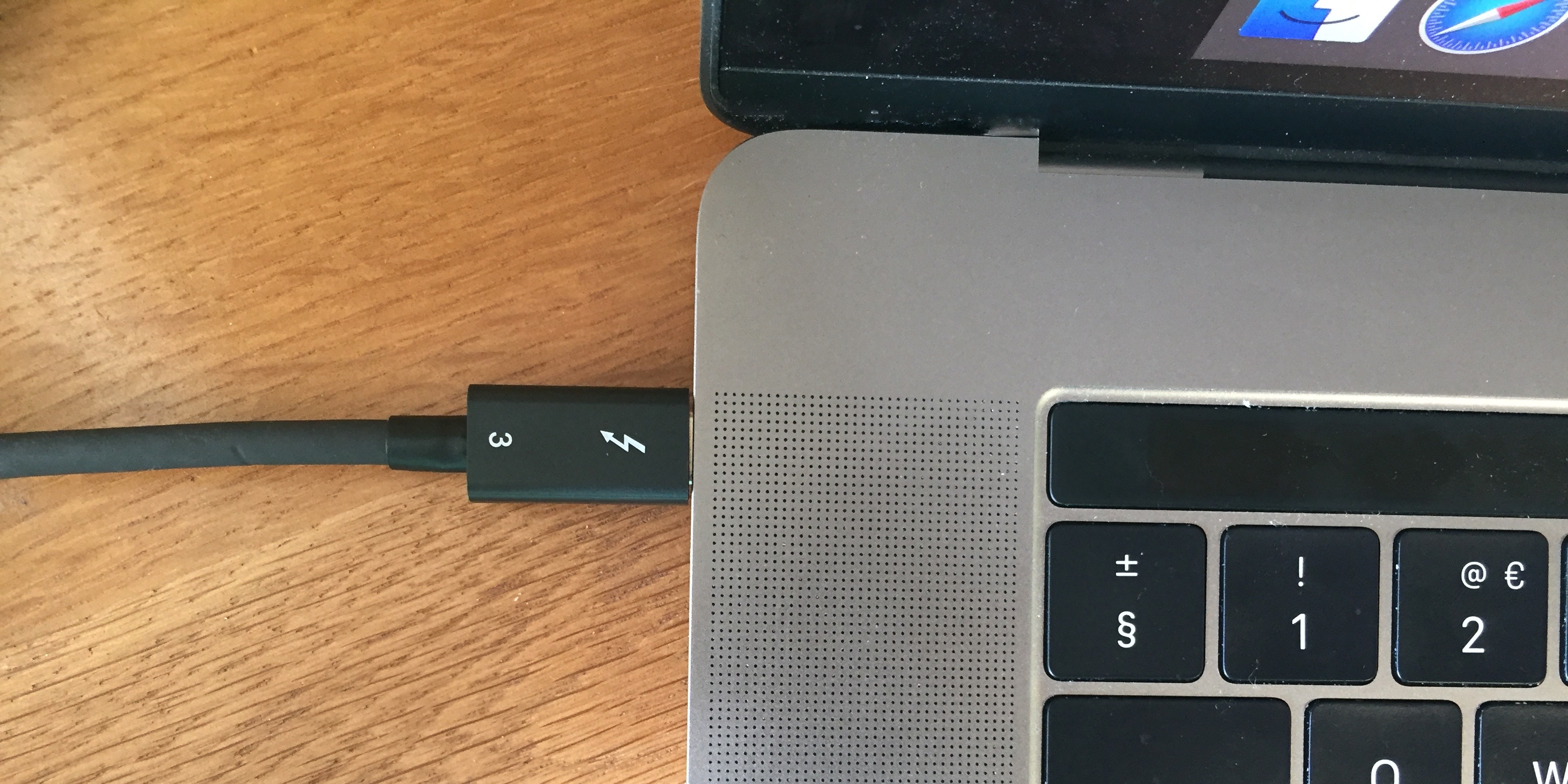 The one cable dream

The power situation is interesting and perhaps one of the few disappointing elements of this product. Whilst it will charge over the cable, the dock does not support full 85 watt charging. It will only send 60 watts power. For a 13-inch MacBook Pro, this is perfectly fine. For a 15-inch MacBook Pro user like myself, the lower wattage means that it will charge more slowly over the dock cable than if I used the normal Apple adapter.

In practice, I leave it plugged in throughout the work day so the difference between 3 hours of charging and 5 hours of charging (whilst in use) is immaterial. I have the official Apple charger that came in the box upstairs in my bedroom, which I take on trips and occasionally inside the house. That’s a nice side-benefit of using one of these docks; there’s no need to buy an extra USB-C charger for the laptop. You can almost subtract the cost of an additional charger from the price of the dock purchase.

The lower power wattage downside is something you probably just have to live with. In the future, I’m sure OWC will release a second-generation dock will full 85 W charging. If that is a deal breaker, consider other options like the $350 Belkin Thunderbolt 3 Express Dock HD or $350 CalDigit TS3 docking station, but note the price premium of these docks. 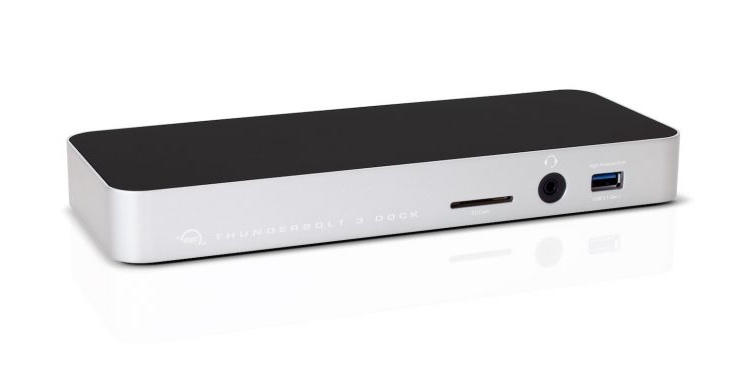 The other disappointment I have with this dock is the lack of a native HDMI port. My 2560×1440 display connects via mini DisplayPort, but HDMI is so common in general it’s a strange omission. You could argue that this is a product targeted at professionals, and professionals typically use displays with DisplayPort outputs, but it’s a weak defence. If you wanted to connect to a display with HDMI using this dock, I’d recommend buying a mini DisplayPort to HDMI cable (cable, not dongle). You could also use the Thunderbolt 3 ports. The Thunderbolt 3 dock has enough bandwidth to drive a single 5K display, or up to two 4K displays at once.

In terms of reliability, I have been using the OWC dock for months without issue. Everything works as if I had plugged it directly into the laptop. The Ethernet works at full speed, the laptop always recognizes the display and connects to it, and USB accessories pop up instantly in macOS. I plug my Rode Podcaster microphone into the dock’s front USB port, with which I have recorded Happy Hour every week this year, without any issues at all.

I don’t like the fact the front side of the dock does not include a USB-C port. This forces me to plug in the laptop to the dock using one of the backside ports, which leads to a less-than-ideal cabling situation where the wire has to curve around the side of the unit. In an ideal world, the port for the mandatory connection would be on the front side. When you buy the dock, OWC ships a 0.5m Thunderbolt 3 cable with it. I think most people will need 1m or 2m lengths, and they aren’t cheap, so be aware of a potential extra cost. 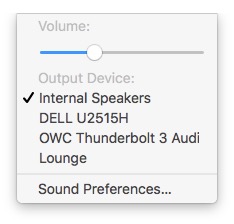 The 3.5mm aux port is exposed as a permanent item in the audio menu (‘OWC Thunderbolt 3 Audio’) and shown even if the port is not in use; ideally this would only be displayed if a headphone or mic was actually plugged in. The two status LEDs get on my nerves and serve effectively no useful information, so to really nitpick, I wish there was a setting to disable them.

Overall, it’s a great Thunderbolt 3 dock with a lot of expandability. It definitely improves my enjoyment of the USB-C only MacBook Pro; it may be a first world problem, but the convenience of only having one cable to plug in is hard to overstate. The dock also helps tidy up cables on my desk and now I have a readily available SD card, normal USB and other ports if and when I need them.

The slower charging speed is the only big negative to bear in mind, but also note that it is significantly cheaper than other docks that offer full 85 W charging. If you have a 13-inch MacBook Pro, the difference in wattage doesn’t matter at all.

You can buy the OWC Thunderbolt 3 Dock for $299, available in Silver or Space Gray. Find out more information on the manufacturer’s product pages.