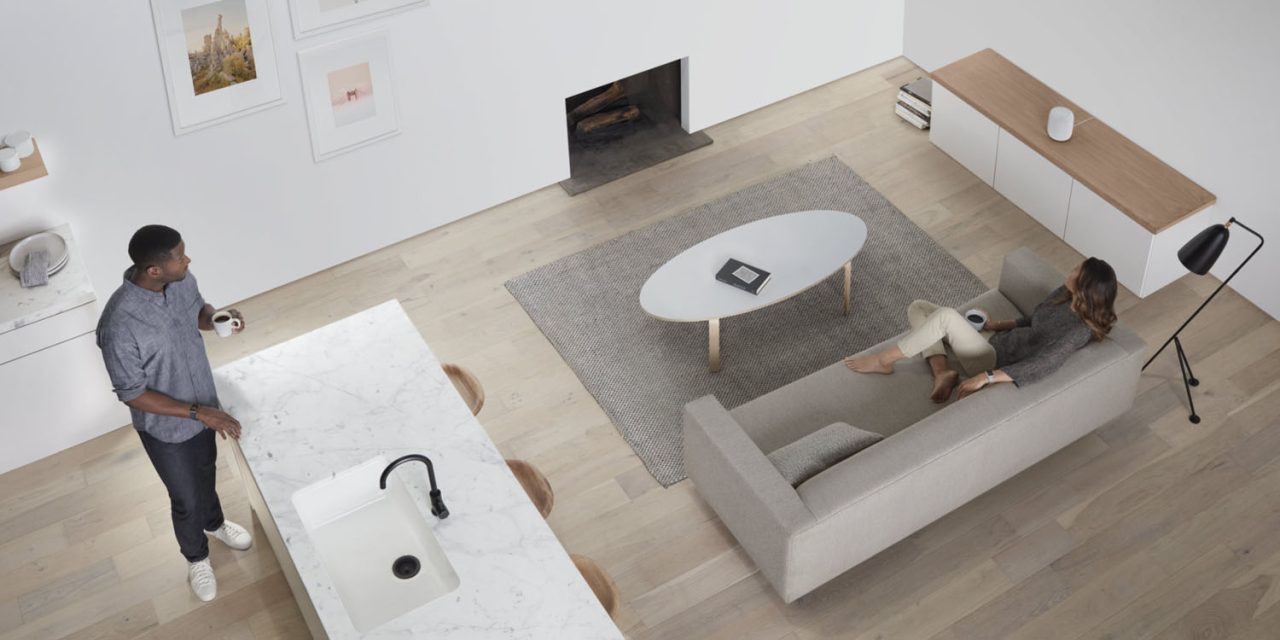 One of the features Apple emphasized for its upcoming HomePod speaker is what the company refers to as ‘spatial awareness.’

HomePod uses spatial awareness to sense its location in a room and automatically adjust the audio. [This] automatic room-sensing technology allows HomePod to quickly learn its position in a room, whether it’s in a corner, on a table or in a bookshelf, and within seconds, is perfectly optimized to deliver an immersive music listening experience wherever it is placed.

This is a more efficient version of a semi-manual audio adjustment process used by other high-end speaker systems like Sonos and Naim. But a new Apple patent application published today suggests that future versions may go further …

The patent describes how a speaker could not only configure itself to an initial location, but also detect when it has been moved to a new position and reconfigure its sound to suit.

A loudspeaker may be initially oriented and configured such that corresponding transducers produce a sound beam directed at a listener. However, any movement of the loudspeaker may require 1) manual adjustment of drive settings or 2) a complete recalibration of the system such that the generated sounds are again properly aimed at the target listener. Accordingly, in these traditional systems, the listener must manually determine that one or more of the loudspeakers has moved such that recalibration and or adjustment may be performed. This repeated manual determination of movement and corresponding adjustment may become time consuming and may provide a poor user experience […]

A system and method is disclosed for determining whether a loudspeaker device has relocated, tilted, rotated, or changed environment such that one or more parameters for driving the loudspeaker may be modified and/or a complete reconfiguration of the loudspeaker or the loudspeaker system may be performed.

This would make it practical to simply pick up the HomePod and take it with you to a new room as desired, knowing you’ll always get the best audio performance.

The patent notes that a huge variety of sensors could be used to facilitate the detection of speaker placement.

The sensors may include one or more of a video camera, a still image camera, a compass, an accelerometer, a light sensor, a wireless antenna, a thermometer, current/voltage monitor, a microphone, a gyroscope, and barometer/pressure monitor. In other embodiments, other sensing devices may be integrated or otherwise in communication with the loudspeaker.

This is likely ensuring that a patent covers all of the bases rather than any intent to actually use such a comprehensive mix.

As always with Apple patents, there’s no telling which ones will make it into a product, but given that Apple has already implemented the first half of the equation in the first-generation HomePod, I’d say it’s a reasonable bet that it will add the second half at some point.

Although HomePod doesn’t go on sale until December, it’s already been spotted in the wild as Apple seeds it to select retail staff to test in real home environments.