The Iconfactory has officially launched Twitterrific 5 for Mac after a successful Kickstarter campaign for Project Phoenix earlier this year. Twitterrific for macOS is a totally new version of the Twitter client with a modern design that includes a dark theme, visual customization, muffle/mute/timeline syncing to the iOS app, and more.

Twitterrific for Mac has been effectively dead for the last few years as the market shifted to iOS where Twitterrific 5 has experimented with in-app purchases to remove ads and unlock features.

With Project Phoenix, however, The Iconfactory used crowdfunding to ensure demand for a modern Mac client before devoting months of development work to the project. Ultimately, the Kickstarter campaign received $108,346 from 2,852 backers.

For users of Twitterrific for iOS, this launch means there’s finally a modern version of their favorite Twitter client for the desktop again. But even if you’re not yet a Twitterrific user, the interest in the new app existing is both good news for the Mac as a platform as well as the Mac Twitter client competition (which Twitter tries to prevent without maintaining its own app well).

Twitterrific lets you choose between two themes (light and dark), a handful of fonts including Menlo (shown below), nine text sizes ranging from Tiny to CHOCK, and three media thumbnail options. 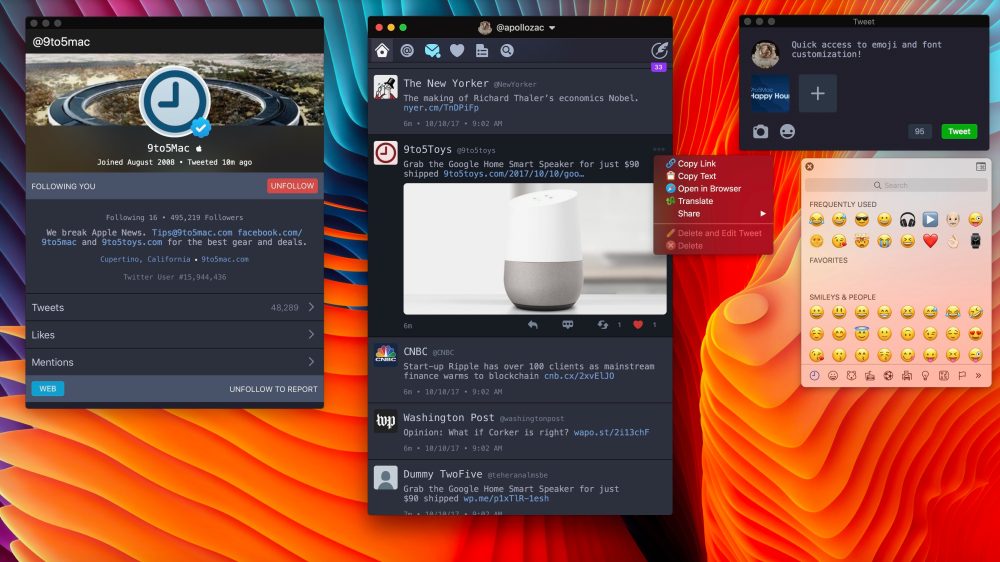 Changing between light and dark theme also changes the window color for menus even if you’re not using the basic ‘Use dark menu bar and Dock’ preference which is a nice touch, and media opens in a whimsical and fluid popover with share options and even playback controls for video included.

Twiterrific also includes VoiceOver support for navigating the timeline, composing tweets, and the option to add a text description to images as a fantastic accessibility feature.

And like the iOS version, Twitterrific 5 for macOS lets you quickly fix typo tweets with an edit workaround that actually deletes the typo tweet and replaces it with your edited version without manually copying and pasting the tweet.

Here’s the full feature list for Twitterrific 5.0 for macOS:

Twitterrific 5 for macOS is available to purchase on the Mac App Store for $19.99 and runs on macOS 10.11 El Capitan or later.