If you’re selling (or generously handing down) your MacBook Pro with Touch Bar, Apple recommends an extra step when erasing your data before parting ways with your machine. This step requires an obscure Terminal command that you wouldn’t assume and isn’t required on Macs without the Touch Bar.

It’s not exactly clear what Touch Bar data is stored and being erased (the Touch ID fingerprint reader is part of the Touch Bar although data is stored in the Secure Enclave); Apple just points to its guide for using the Touch Bar in the instructions. Still, Apple says MacBook Pro with Touch Bar owners should use this Terminal command to clear information that the Touch Bar stores in addition to erasing macOS.

Apple highlights the additional step in its ‘What to do before you sell or give away your Mac’ support guide:

If you have a MacBook Pro with Touch Bar, clear its data

You can clear any information stored by the Touch Bar before you sell or give away your MacBook Pro.

When the macOS Utilities window appears, choose Utilities > Terminal in the menu bar. Type this command in Terminal:
xartutil --erase-all

Press Return, type yes when asked if you’re sure, and then press Return again. Finally, choose Terminal > Quit Terminal and proceed to the next step.

My guess is you probably shouldn’t worry if you sold or gave away your MacBook Pro with Touch Bar and didn’t use the Terminal command first, but it won’t hurt to give it a shot if you want to follow Apple’s steps for erasing your MacBook Pro.

It does feel rather un-Apple to type in the Terminal command (it’s not exactly user-friendly even for a Pro machine) and the payoff makes you think ‘okay, that was it?’ but here’s how it looks: 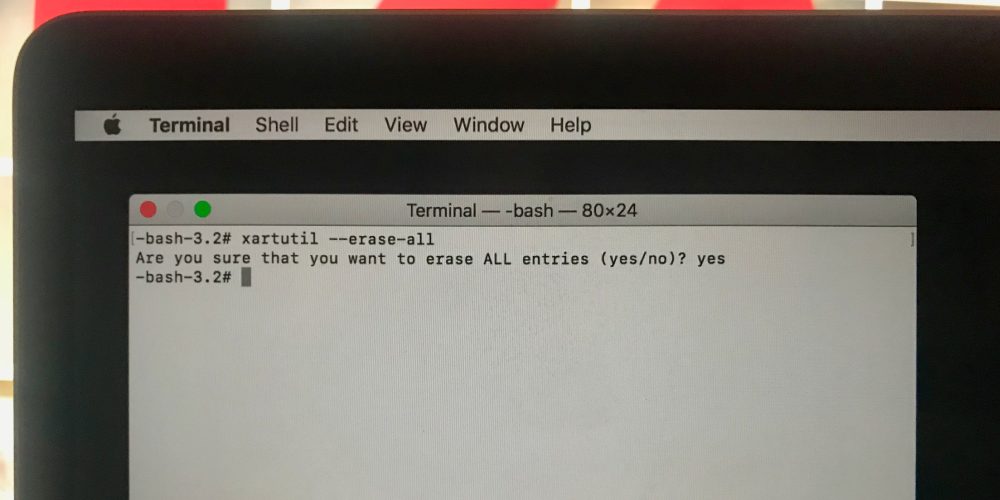