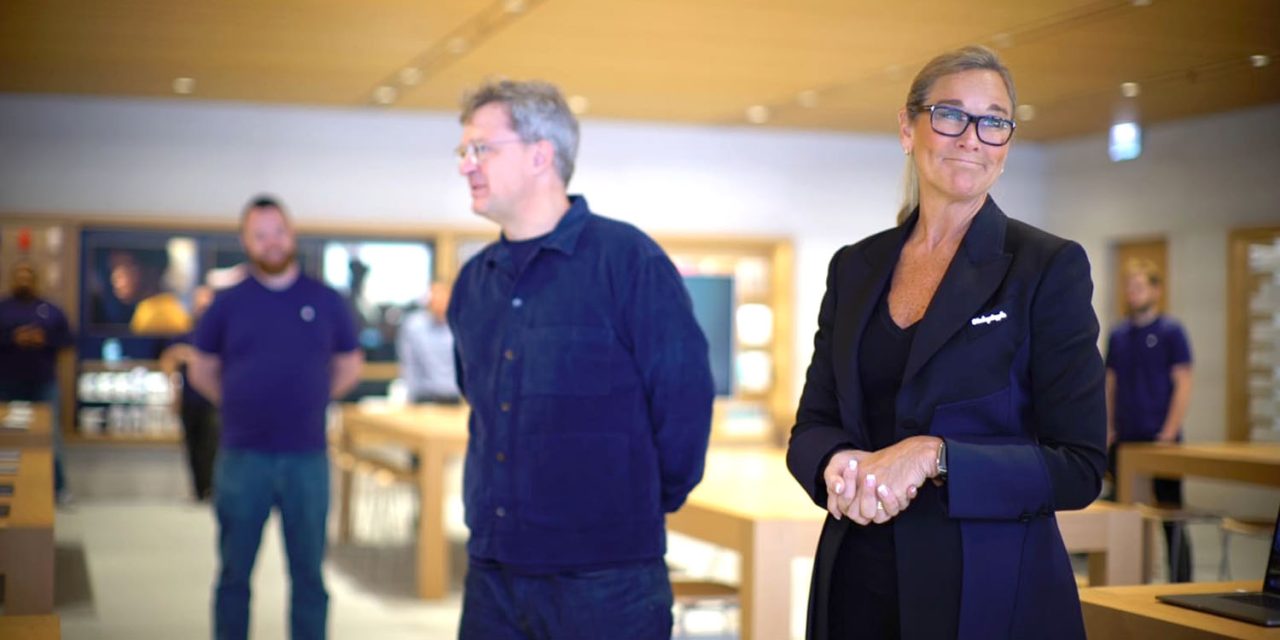 When Angela Ahrendts was head-hunted by Apple to head up its retail operations, she said she was given one constraint on what she could change.

“In one of those very early conversations,” Ahrendts recalled, Ive said, ‘Don’t mess with the tables. They’re the same tables we used in our design studio and I love that it goes from the studio to the stores.’ He said, ‘They’re sacred.’”

She recounted the instruction in a new profile of her work …

The Buzzfeed profile describes Ahrendt’s vision for a new way of looking at the stores.

Ahrendts’s approach to retail harkens back to the late founder Steve Jobs’ insistence on building “the whole widget” — in other words, constructing the look and feel of a device, as well as making the operating system and the processor that runs it, in order to fully optimize — and control — the entire user experience.

“This is our hardware,” she said, pointing to the Indianapolis store’s glass doors and indoor ficuses. ”Then you say, ‘What’s the software of the store? How do we turn it on?’ Because this unto itself is magnificent, but it’s not just what it is, it’s what it does,” referring to the new Today at Apple program, under which locations host events like photography workshops and coding classes.

But it’s no puff-piece: it makes no bones about the reaction to one of her big ideas – to rebrand the stores as something else.

In February 2016, Ahrendts removed the word “store” from the retail naming convention (for example, Apple Store Union Square is now called Apple Union Square) — and at the most recent keynote, she said, “It’s funny, we actually don’t call them ‘stores’ anymore. We call them ‘town squares’ because they’re gathering places for 500 million people who visit us every year.” The phrasing didn’t sit well with critics, who say that a retail store that sells $1,000 iPhones is hardly a space synonymous with civic life, that it’s not actually a public place, and that calling it such is a “pretentious farce.”

It also has commentary from retail staff who are not persuaded that some of her ideas are realistic.

Earlvin Rivera, a former Genius who spent nearly a decade at Apple, told BuzzFeed [that] Ahrendts got rid of lanyards that bore employee’s names, and instead encouraged them to “make a human connection” with customers by introducing themselves — something that, according to Rivera, didn’t always work in practice: “The velocity of customers coming into our store made it really difficult to make that connection with every customer, which is just the reality of retail” […]

Additionally, Geniuses only have 10 minutes to diagnose every phone issue and 15 minutes for every Mac issue, something Rivera, the former Genius, said “is just not realistic.”

Another long-term retail employee spoke about corporate apparently being blind to short-staffing in the stores.

Customers are seeing waits of 30 to 40 minutes to buy something, she said, because the location is so short on staff: “We’re asking, ‘Can we hire more people? Because this is our busiest time,’ and they’re like, ‘We’re fully staffed. We’re doing great.’”

But it’s clear that Ahrendts was right about one thing: stores are not just somewhere people go to buy things.

One rebranding exercise that does appear to have succeeded is changing the name of Workshops to Today at Apple. The workshops were so much of a well-kept secret that many didn’t know they existed, and broadening their scope has also dramatically increased their visibility.

You can now go to the Apple Store to learn how to code in a schmancy new theater, or watch a performance by an Apple Music–featured singer-songwriter, or sit under a tree with a Genius to figure out why your iPhone doesn’t charge anymore, or watch as an illustrator doodles live (on, of course, an iPad).

Check out the rest over at Buzzfeed.