watchOS 4.1 brought iCloud Music Library and Apple Music streaming to Apple Watch, but the redesigned Music app on watchOS 4 killed a feature that it offered since launch. watchOS removed the ability to remotely control music playing on your iPhone from your Apple Watch in favor of focusing solely on music playable from the watch.

While this change makes the Music app much easier to use and understand for most users, removing a useful function from the Apple Watch isn’t progress for everyone. Fortunately, I think the answer to this problem is right in front of us.

My guess is Apple only ever supported remote music control from the iPhone on the Apple Watch as a short-term solution to showing your full music library on Apple Watch without syncing everything (which wasn’t possible) or streaming.

With Apple Watch Series 3 and AirPods, Apple is encouraging streaming Apple Music without worrying about syncing at all so the Music app just works without manually adding local music.

But there’s already an app on Apple Watch that would be perfect for remotely controlling your music on another device from Apple Watch: Remote. 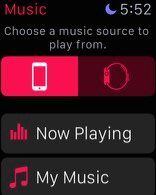 The Remote app is built-in just like Music and already lets you remotely play, pause, and control volume from iTunes. watchOS 4 lets you change volume and play/pause from currently playing iPhone audio with Now Playing, but you can’t browse your library and change the currently playing selection.

Restoring the old iPhone control functionality previously offered in the Music app with the Remote app would be a natural fit.

Given the current shape of the Remote app on watchOS, I wouldn’t assume it is likely we will actually see this happen. The built-in Remote app is primarily a D-Pad controller for Apple TV but doesn’t feature Siri control or voice input for tvOS as it was designed for older Apple TVs originally.

While bringing remote music control from iPhone could give new purpose to the built-in watchOS app, I think it’s more likely we’ll see Remote disappear from the Apple Watch eventually.

That would mean losing AirPlay control, however, as right now using Force Touch (deep pressing) in the Remote app is the only way to actually toggle AirPlay playback from shared libraries on Apple Watch (despite Control Center using AirPlay for Bluetooth).

I’m definitely a huge fan of iCloud Music Library and Apple Music streaming from the Music app on watchOS 4, but I would love to see the original iPhone music control feature restored with the Remote app.