ecobee is the maker of what I consider the best HomeKit thermostat on the market, and the new version called ecobee4 adds built-in Amazon Alexa voice control and works with Google Home. ecobee4 offers the same features as the HomeKit-enabled ecobee3 which we reviewed last year, so should iPhone users spend the extra money on the new version?

What does Alexa add?

You could already control ecobee thermostats with Amazon Alexa using Amazon Echo smart speakers, and building in Alexa basically turns ecobee into a mini Echo speaker on your wall.

ecobee4 features a built-in microphone and speaker system as well as a new LED indicator. The microphone listens for the Alexa hot word, then the blue LED fires up to let you know Amazon Alexa Voice Service is listening.

It’s not a subtle light and I generally dislike LED status lights on electronics, but it only lights up when Alexa is actively listening which is a nice privacy feature. If you never use Alexa or deactivate it, you’ll never see the blue light. 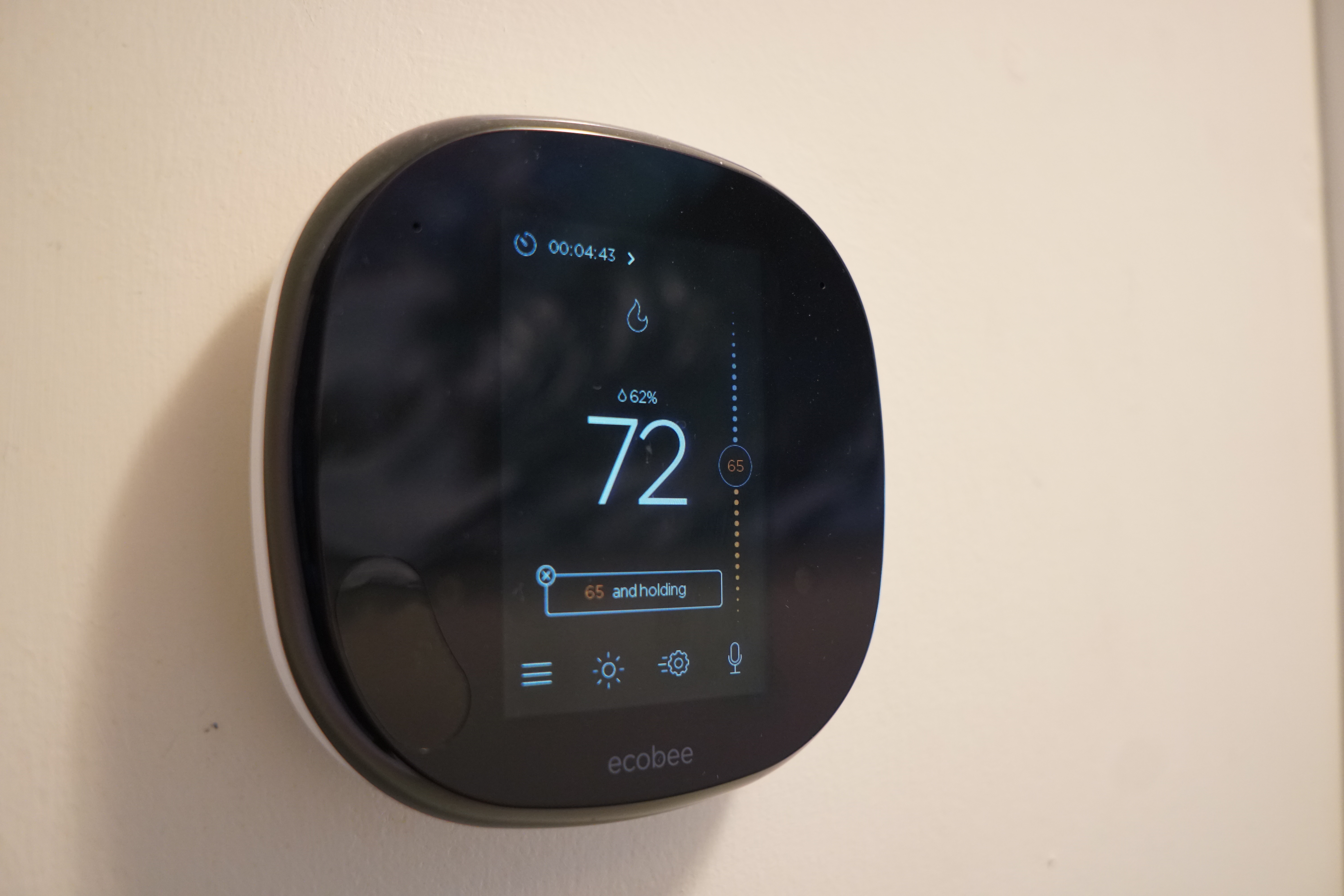 Building Alexa in lets you control ecobee with voice directly from the thermostat. This includes changing between heating and cooling modes and setting specific target temperatures. Alexa can also switch ecobee between home and away modes plus activate and cancel temperature holds. If you don’t already have an Alexa speaker nearby, it’s a nice way to interact with ecobee hands-free.

ecobee can also be controlled by voice with Siri on iPhone, iPad, Apple Watch, and Apple TV, and with HomePod when Apple’s smart speaker launches in December. ecobee also introduced Google Home integration this week so the smart thermostat works with all three major voice assistants.

Alexa in ecobee isn’t limited to just thermostat control. You can set timers and alarms on ecobee4, ask for weather updates and news reports, and even stream music directly on the smart thermostat. The speaker quality is acceptable for spoken audio, but it’s not really intended to be a music speaker however.

ecobee4 actually connects to any Alexa skill enabled in Amazon’s Alexa app that’s associated with your Amazon account. Having ecobee4 as an Alexa input device is practical for smart home control like controlling connected lights and other nearby smart home accessories. 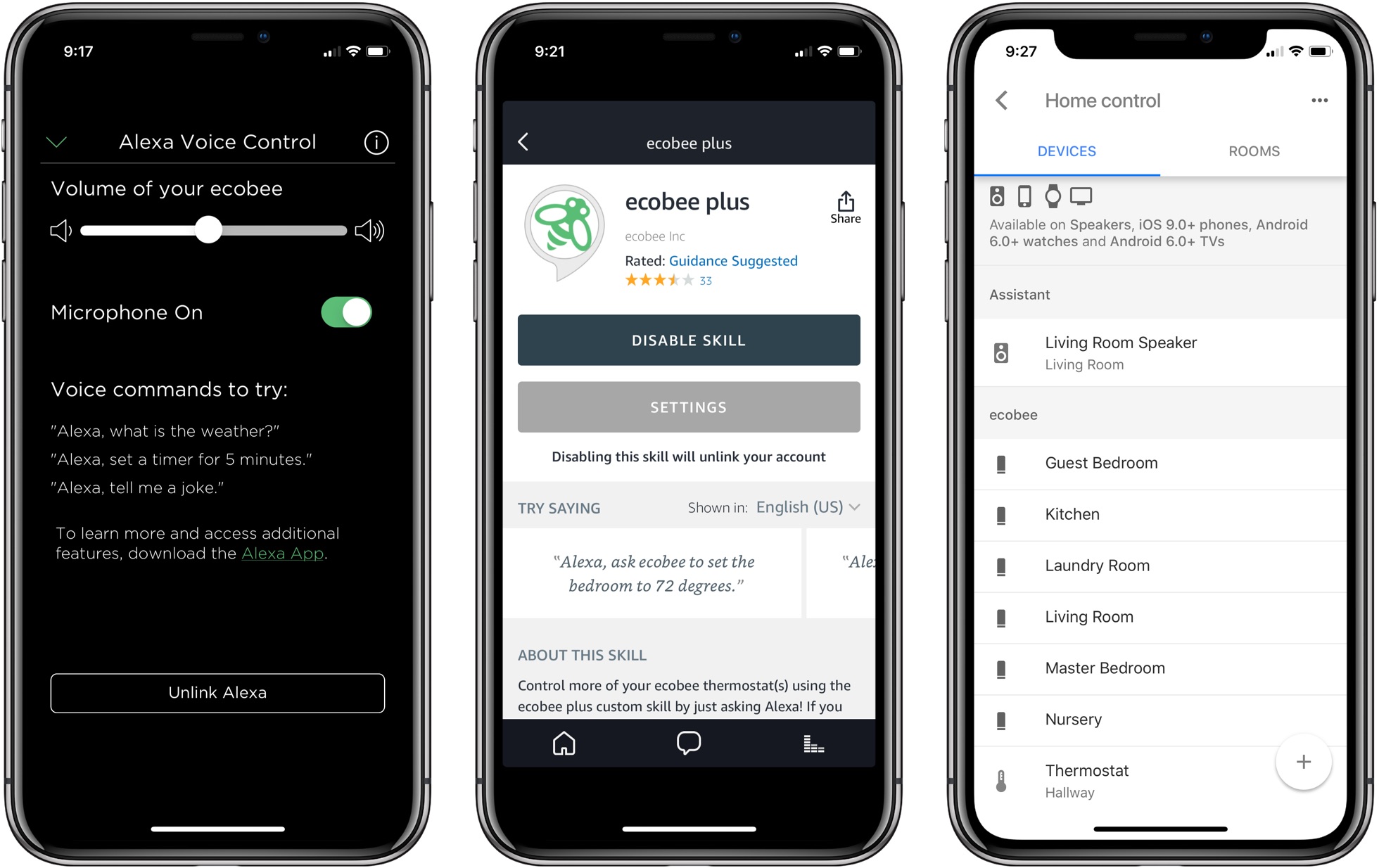 You can also get rather silly with Alexa on ecobee4 since it’s the full version of Amazon’s voice assistant. For example, my four-year-old daughter finds it entertaining to ask Alexa (who she often calls Zelda by mistake) to read her a bedtime story or tell a joke.

There are skills that you can configure to work with these requests, and I overheard the thermostat reading the full authorized biography of Steve Jobs (the only book in my Kindle account) after she asked the thermostat to just read a story. “Alexa, stop.” 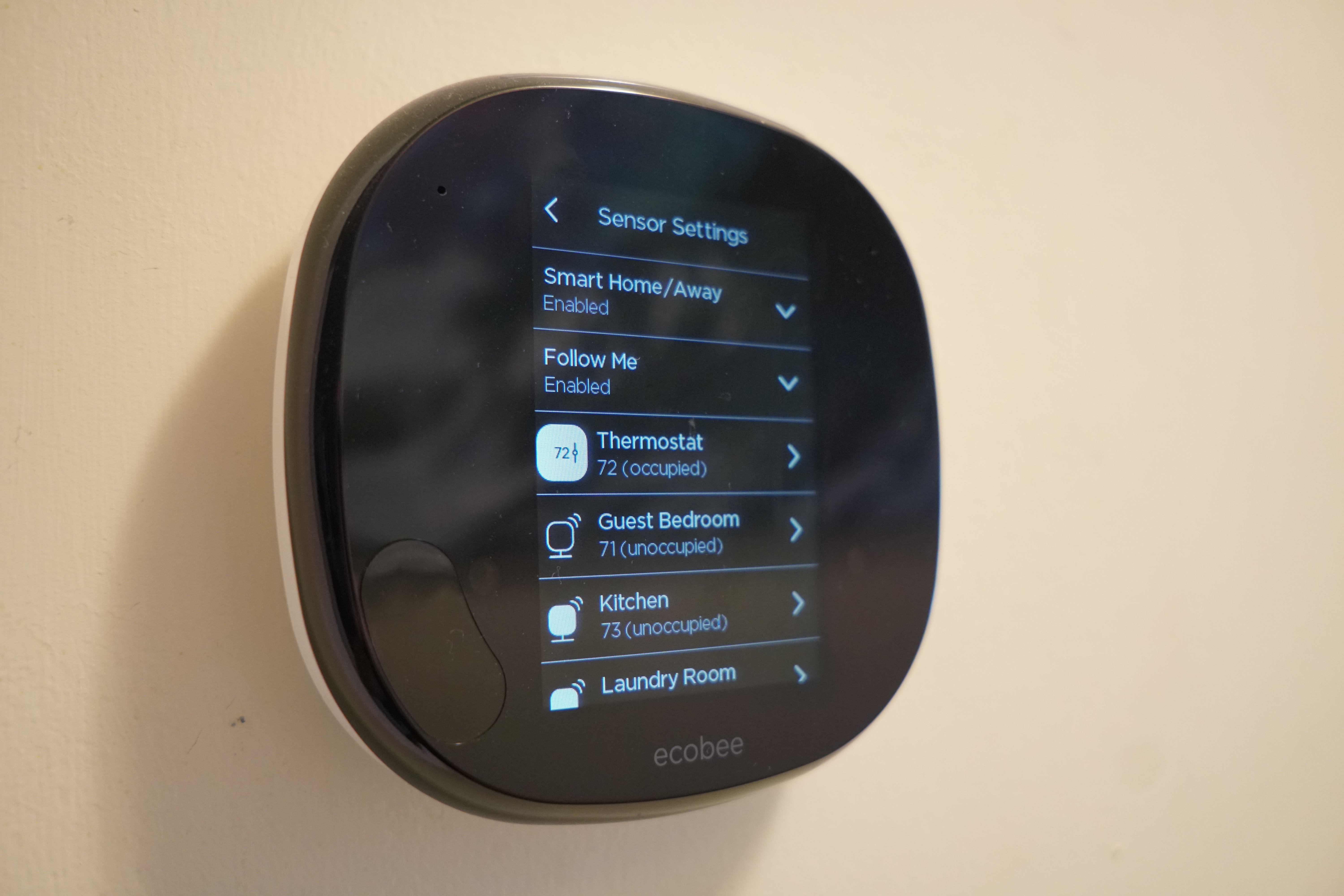 ecobee4 initially had an issue with wanting to activate anytime it heard Alexa even if you were talking to another Alexa device closer to you, but a firmware update rolling out adds Echo Spatial Perception which tries to make only the closest Alexa device respond when prompted.

I don’t actually have a real Amazon Echo in my house, but my Sonos One is nearby in my kitchen works like a hi-fi Echo with Alexa built-in. I have noticed ecobee4 playing its own music when I’ve asked Alexa on Sonos to play a station, but ESP should address this when fully rolled out. ecobee4 also features an on-screen push-to-talk button to active Alexa, a volume slider for speaker output, and an optional mic mute toggle lets you temporarily disable Alexa input without deactivating Alexa completely. This is only meant to be a temporary state, however, as the blue LED indicator light becomes persistently fired up as a red indicator.

Which should you buy?

The upgrade from ecobee3 to ecobee4 isn’t necessary unless you just really want Alexa built-in, but new ecobee customers will need to decide between two models. ecobee4 with Alexa retails for $249 while ecobee3 lite goes for $169; both work with Apple HomeKit and can be controlled from iPhone and iPad.

Both ecobee thermostats also work with room sensors for detecting presence and temperature, but these are sold separately with ecobee3 lite, while ecobee4 includes one room sensor and features presence detection on the thermostat itself.

Additional sensors are sold in packs of two for $79. ecobee uses these sensors to know where in your home to focus on heating and cooling based on presence and average temperature. 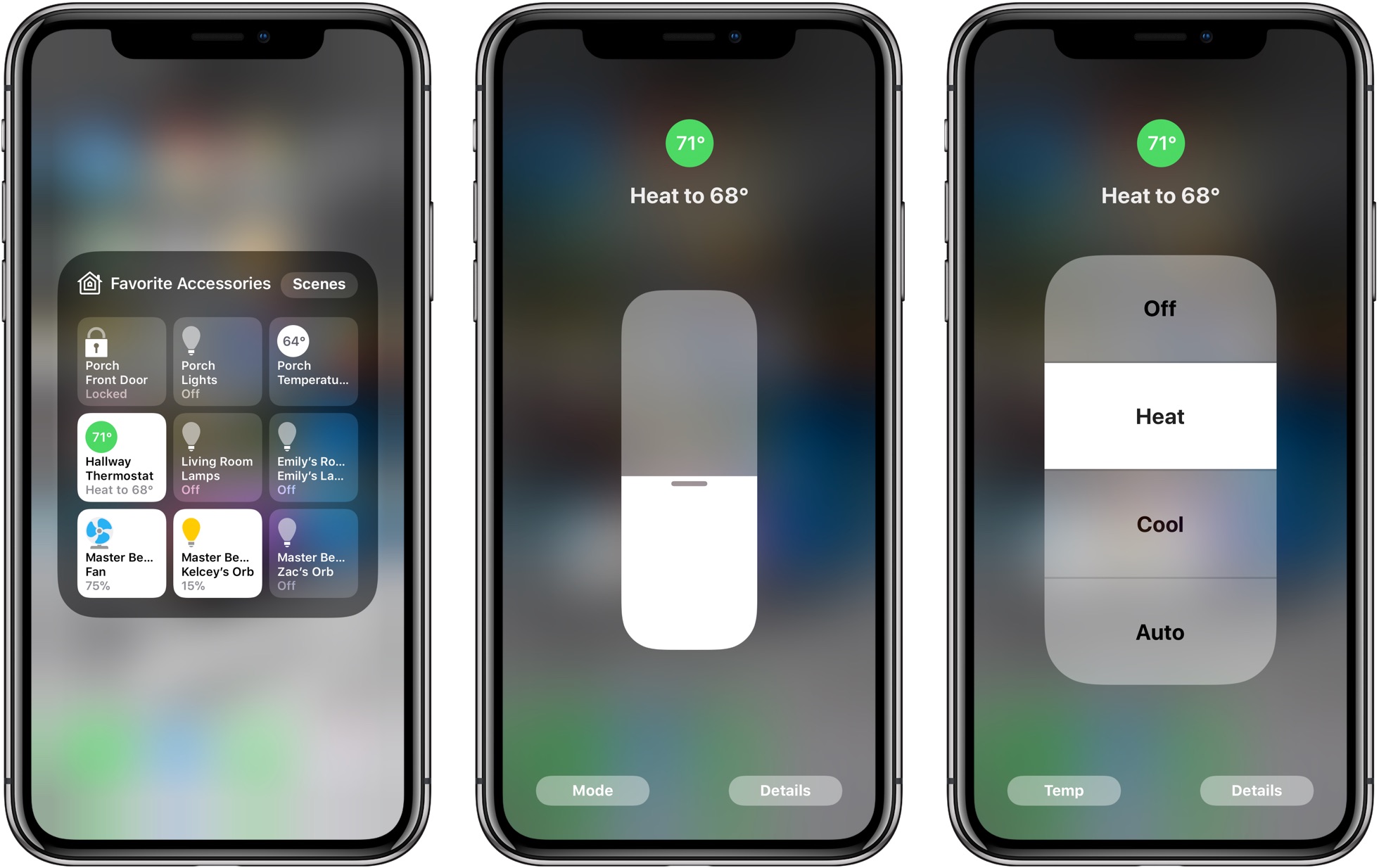 ecobee4 also works with accessories like humidifiers, dehumidifiers, ventilators, ERVs, and HRVs while ecobee lite does not. Read our ecobee3 review for an in-depth look what smart features ecobee offers. 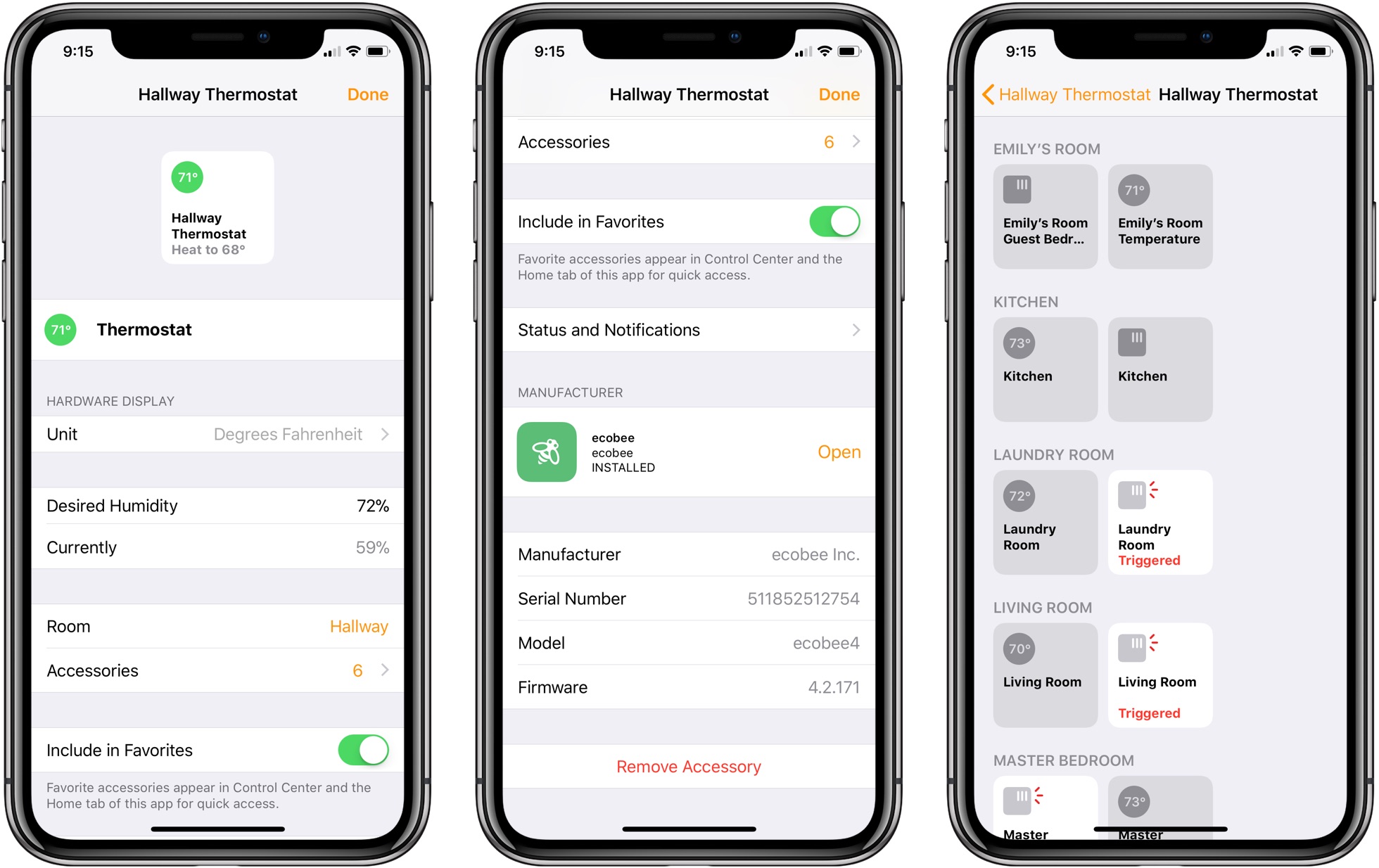 ecobee4 and ecobee lite both work with Apple’s Home app

For most people, I recommend ecobee3 lite if you just want to get started with a HomeKit thermostat and don’t care about the expansion features yet. Building Alexa in to ecobee4 does make it an interesting product, however, even if you only care about HomeKit. 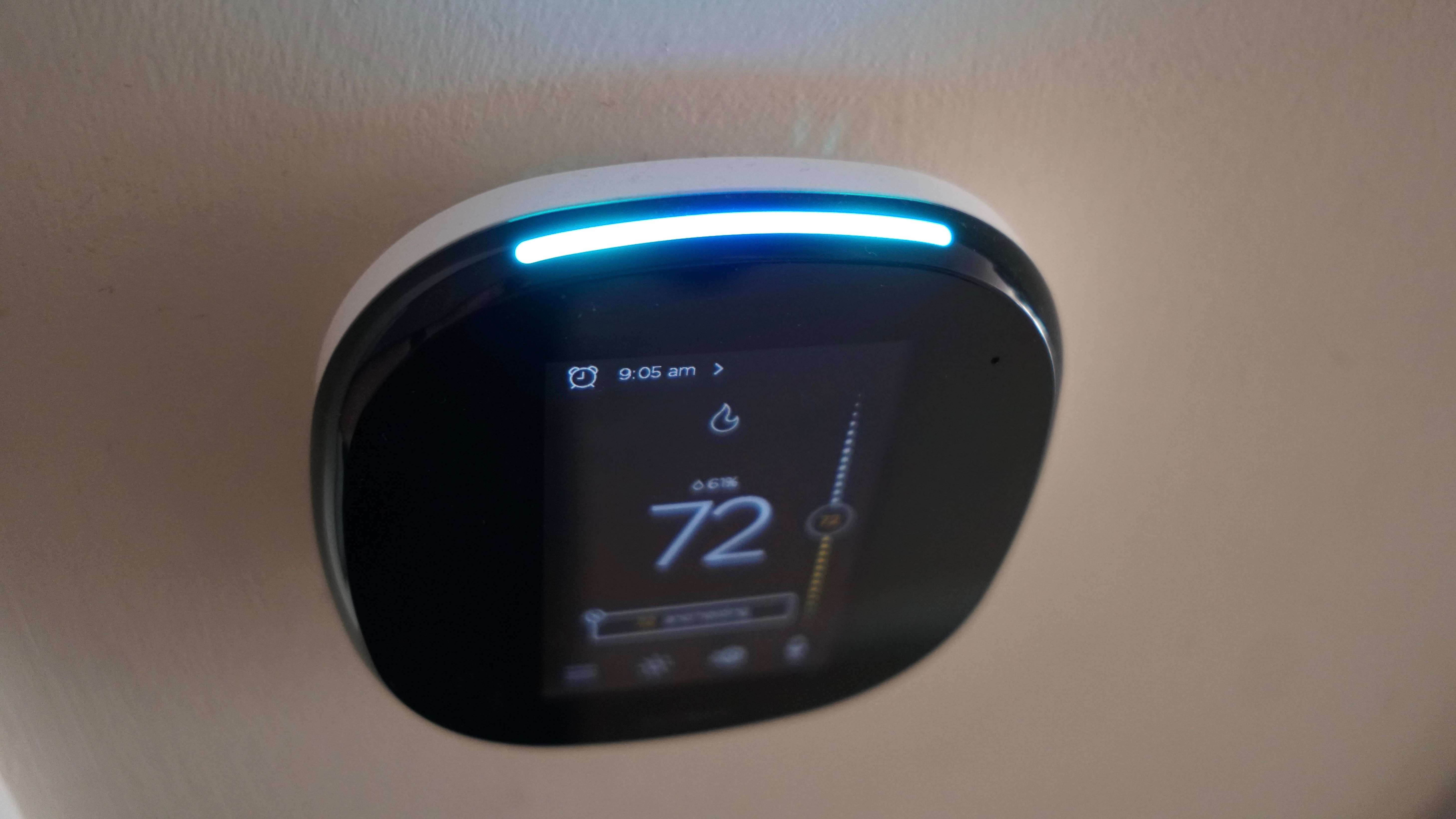 For more on ecobee, check out these stories: