iPhone X Diary: Putting the camera to the test, and being even more impressed

I took a week off last week to get unpacked and settled into our new home. This was a time-consuming process, so I didn’t get much time to get out and about, but with a fabulous view from our new apartment, that didn’t stop me putting the iPhone X camera through its paces. You’ll just have to excuse the fact that the photos are rather lacking in variety!

For each of the photos, I’m showing the original, straight-from-camera version as well as the edited version. And to make it true to the real-life behavior of most people, I’ve used only the stock Camera and Photos apps for both photography and edits.

To be honest, any recent iPhone is a fantastic camera in bright sunlight, so I’m concentrating here on the real test of a camera: low-light performance …

Let’s begin with the above photo, which combines two challenges for a camera: low light, and shooting through glass.

Normally, low light means noise – visible grain in the photos – while shooting through glass degrades the quality, especially through double-glazing like this. I did switch off most lighting to minimize reflections, and held the phone flat to the glass, though you do see a little reflection from the kitchen lighting in the background in the secondary glazing.

All I’ve done above in terms of editing is a crop and a bit of saturation boost. Here’s the original shot, just resized for the web. 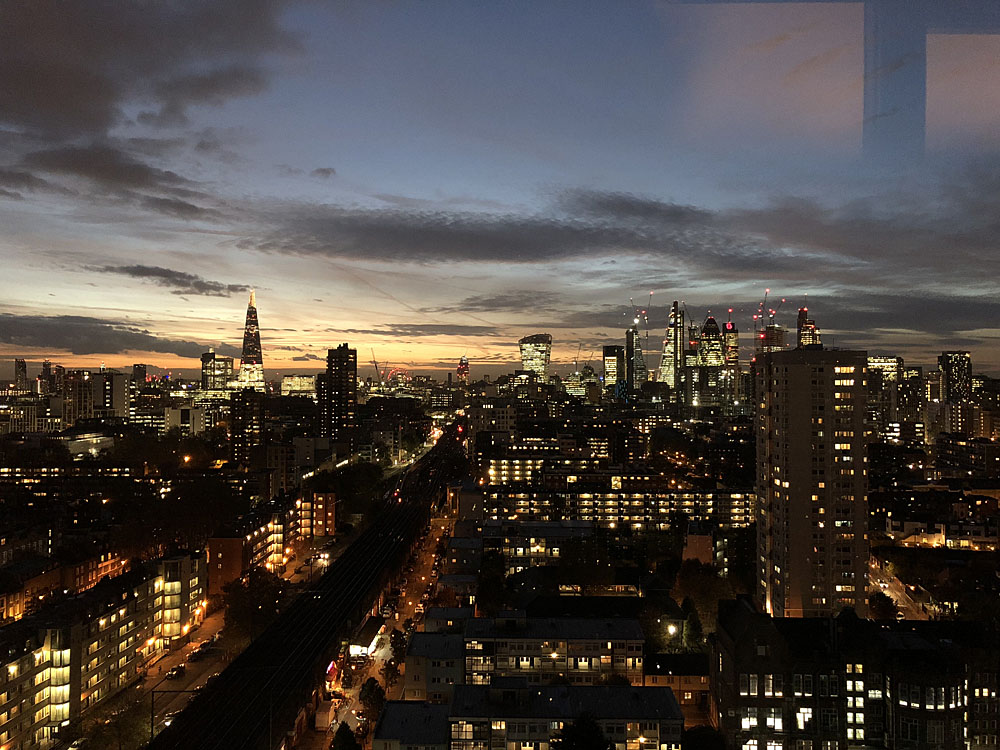 That to me is truly stunning quality. There’s no visible grain at all. It’s well exposed (I didn’t adjust this at all). It’s sharp. The colors look great.

Here’s the next evening, when we briefly had a stunning red sky. Here’s the edited version, which is a simple saturation boost and crop:

And here’s the original (only resized for the web): 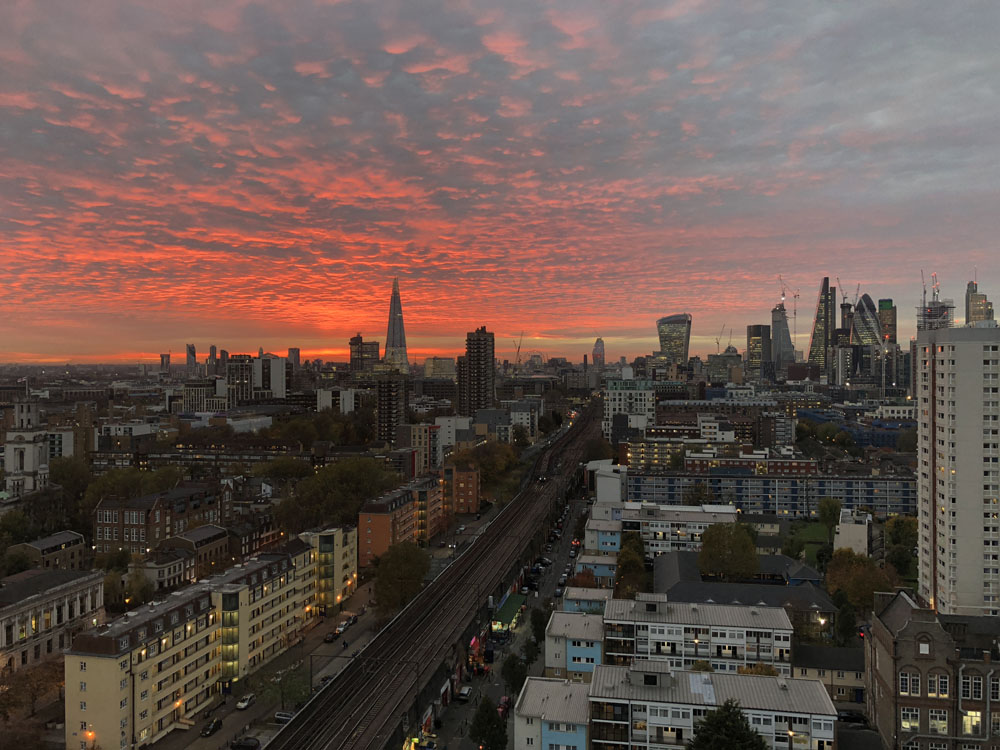 What really impressed me here is I didn’t have to do anything with the shadow areas – the difference you see in light is purely from the saturation boost. The exposure was spot-on.

And here’s an even tougher version, when it’s completely dark. Again, this is straight from camera aside from resizing. I again held it flat against the glass to steady it as well as eliminate reflections, but no tripod was used. 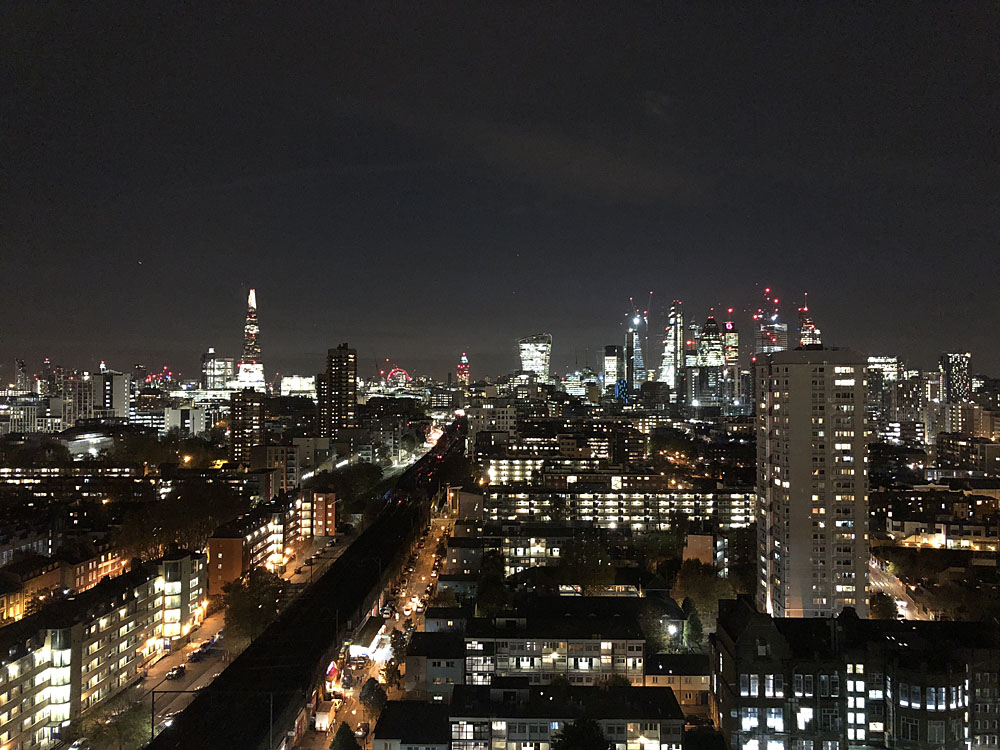 Now, if we look at a 100% crop of this photo, then we can clearly see that the quality doesn’t compare to a high-quality standalone camera: 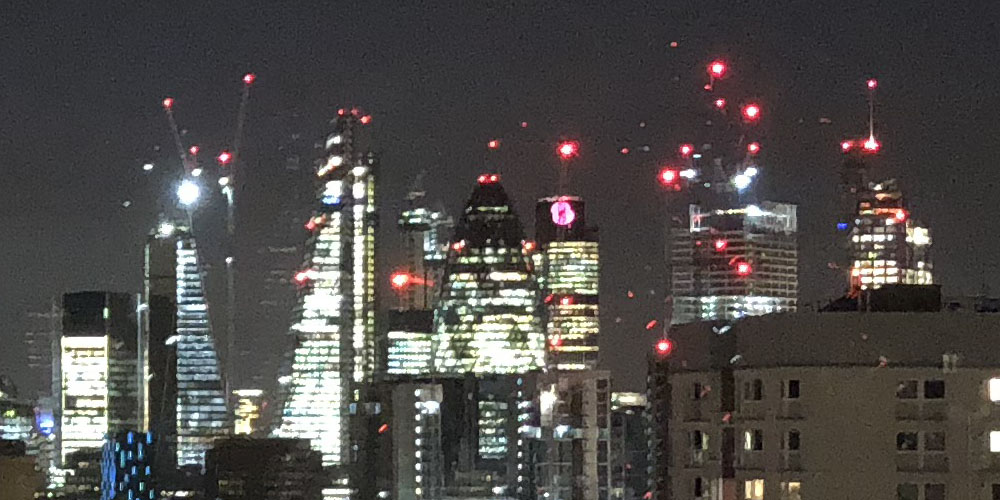 Viewed that close, things get rather fuzzy as the sensor can’t cope with the contrast between the bright lights and pitch black areas. However, what we’re doing here is what photographers call ‘pixel peeping’ – examining an image unrealistically closely.

I said earlier that a real-world test should use only the stock Camera app. But the flip side of what constitutes real-life use is to consider what most people do with their iPhone photos. Namely, they view them on an iPhone or iPad screen, and post them to social media, where they are typically seen around 1000 pixels wide.

That’s what you see in the original version: a 1,000 pixels wide photo. So sure, viewed much more closely, the camera doesn’t perform perfectly in this toughest of scenarios, but it does perform really well for typical real-life purposes.

The one thing all of the shots I’ve shown you so far have in common is that, prior to the latest generations of iPhone, I would never have even dreamed of using a phone to take such shots. With this little light, using a cameraphone, we should be seeing grain the size of a mid-sized state.

But the hardware noise reduction does a stunning job. I’m completely blown away by the lack of noise.

I’d played briefly with Portrait Mode in earlier cameras, and wasn’t impressed. The edges looked very artificial. But Apple had had time to develop the feature, so I started out with a really tough test.

And sure enough, it didn’t cope well:

But that is, if you’ll excuse the pun, a real edge case. So I used it more conventionally.

At first glance, my initial test looked impressive, giving a pretty good simulation of shallow depth of field, blurring out the rather messy background. 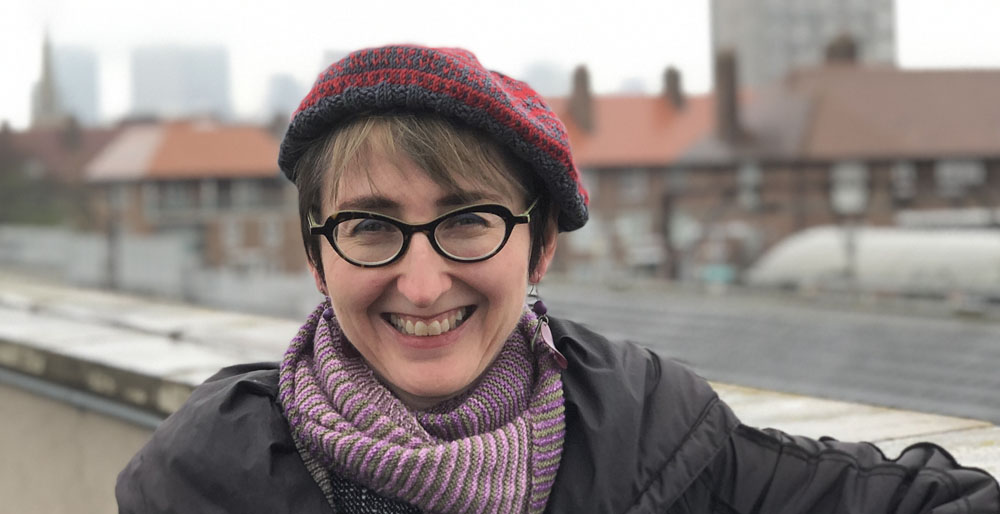 However, a closer look does show some sharpening artefacts that look a little unnatural, and it failed altogether in a couple of areas. If you look at the sleeve area, the algorithm really isn’t sure where the sleeve ends and the background begins, and it has missed the inside of the earring altogether. 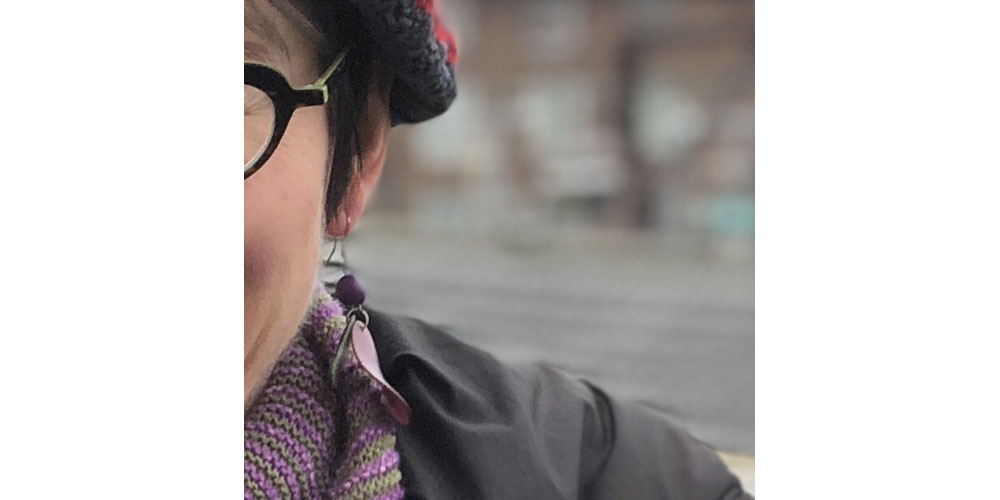 I also found a few times that it really needed to simulate a wider aperture, as things closer to the camera sometimes weren’t sufficiently blurred. Here you can see the lights in the far background have a pleasant bokeh, the Apple Store lights are less blurred and the nearby people and cars are still in focus. 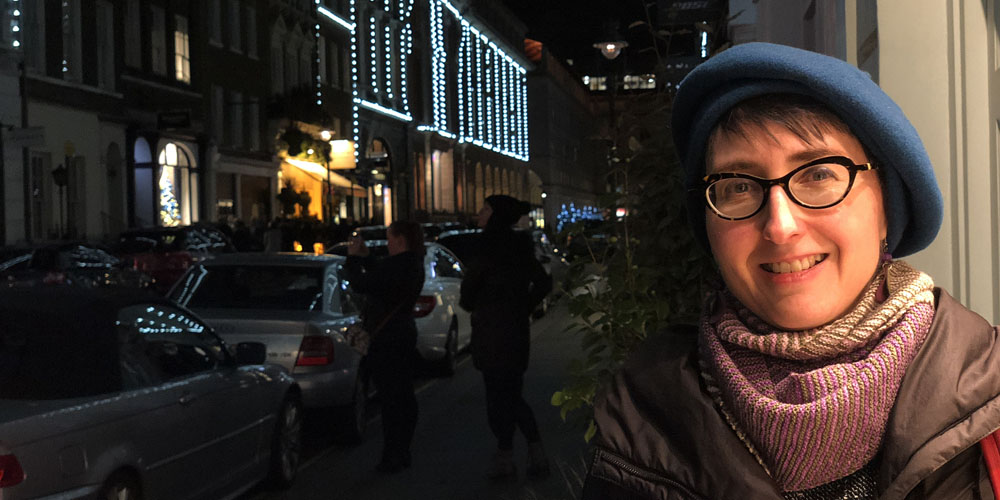 However, the camera again gets top marks for low-light performance, the only lighting here from the adjacent shop window.

The above photo also converted nicely to a mono stage portrait. The grain is more visible, but that’s likely an artistic choice by Apple. 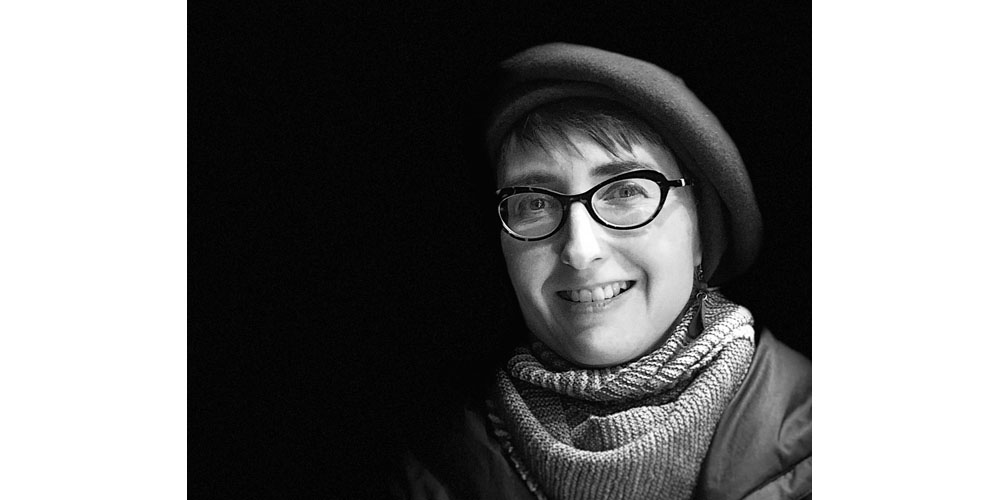 Portrait mode is also useful simply as a telephoto lens. Here it is just wide enough to capture the main buildings I’m after, so there’s no need to crop. 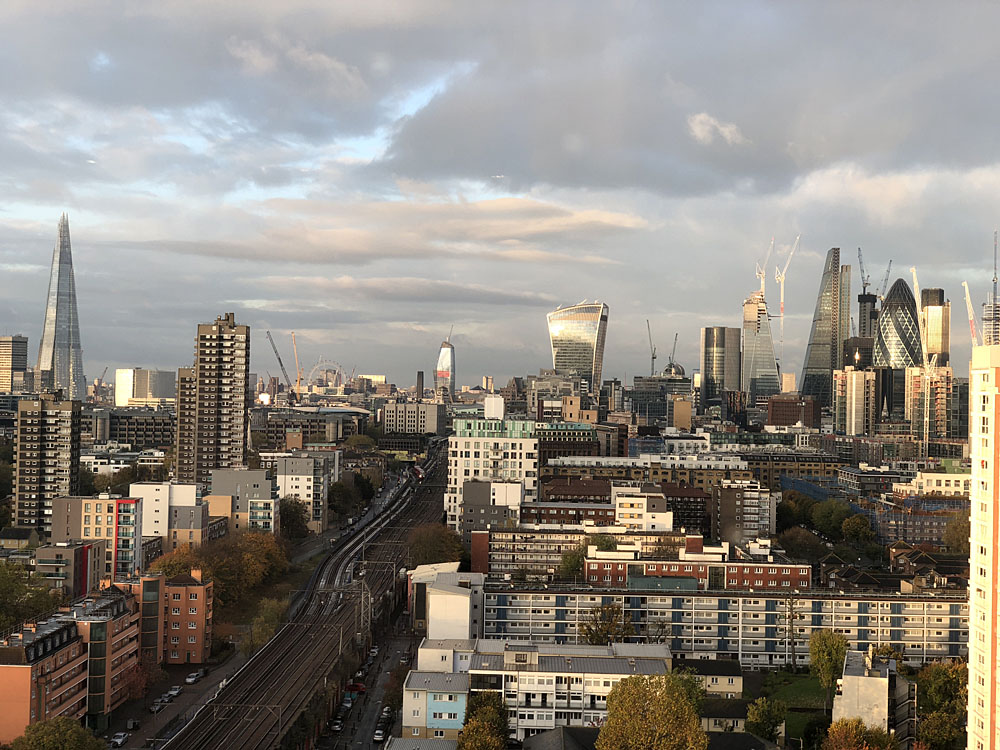 Again, straight from camera aside from a resize.

For me, the real test of an iPhone camera is how annoyed I am if I spot a nice photo opportunity when I don’t have a standalone camera with me. The answer with the iPhone X is ‘hardly at all.’ For example, we went for a stroll one evening, and Tower Bridge was looking rather lovely in the blue hour. Out came the iPhone X and this is the shot it delivered. 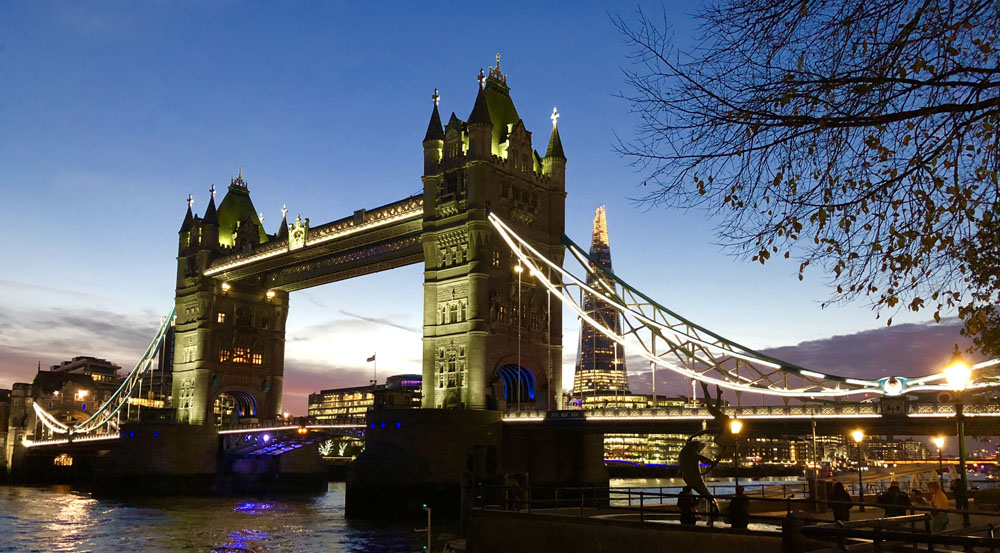 Literally all I’ve done to it is a crop and modest saturation boost in the stock Photos app. Here’s the original: 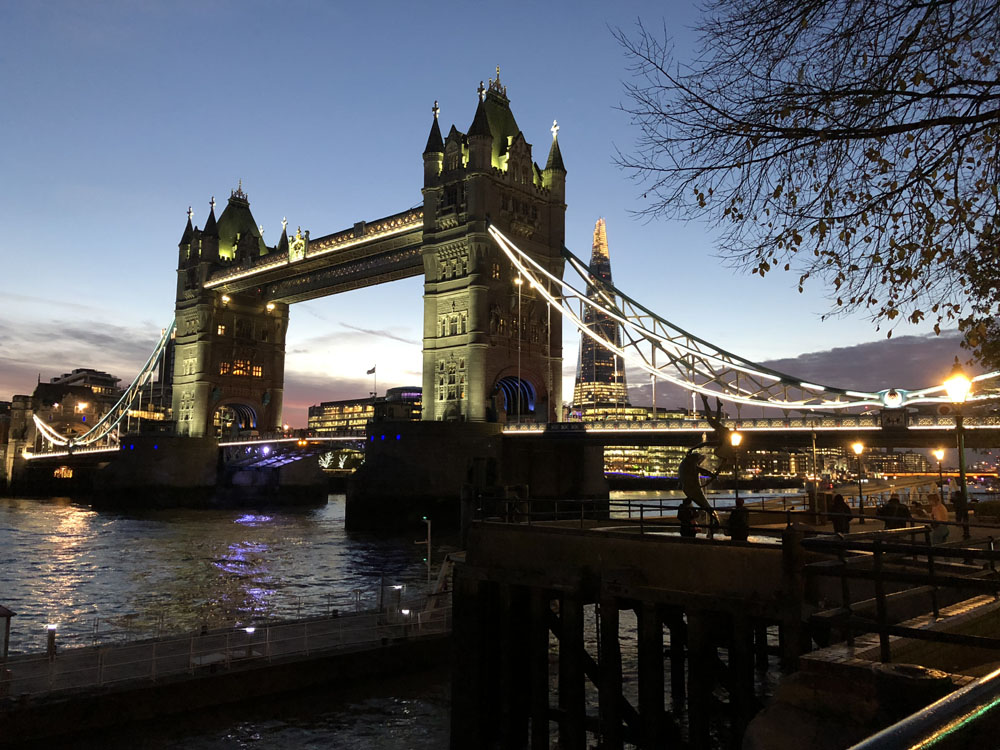 And here’s a 100% crop to show just how little noise there is in the shot: 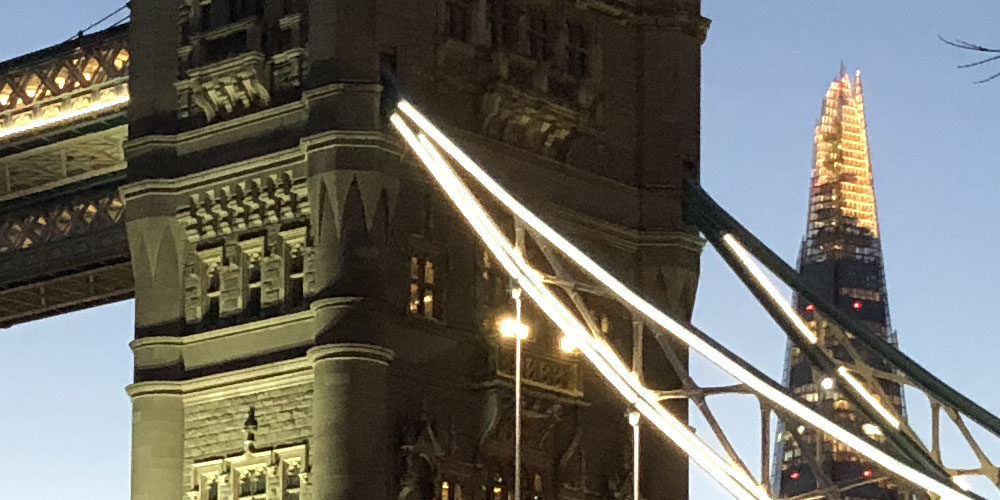 Again, I stress that 100% crops will always show flaws, but this is an absolutely remarkable performance. I’d have had trouble believing that it really was an iPhone shot had I not taken it myself. I could have gotten a marginally better one with my Sony a6300 (side-by-side comparisons to follow in a future piece), but really this is absolutely good enough.

All in all, I’d say the iPhone X is easily $500-600’s worth of camera. So consider you’re buying that plus an iPhone costing the same amount.

I also tested Apple Pay. It works perfectly, Face ID authorizing the payment by the time I’ve held it by the payment pad. It obviously doesn’t compare with the convenience of an Apple Watch, but it is a definite improvement over Touch ID.

One question-mark was whether or not I’d use a case. I generally don’t (though I do enjoy trying them), but with repairs so expensive, I did think it worth considering this time around.

The Nodus is a neat idea. It gets you the same folio design as the Apple one, offering all-round protection and the ability to store cards inside the flap. But instead of a shell case for the phone, there’s a micro-suction pad which sticks firmly to the phone but peels off easily without leaving any residue.

In theory, this makes it faster and easier to take the phone in and out of the case. However, the fly in the ointment is camera alignment. You actually have to position the phone very carefully to ensure the dual cameras align with the rear slot, so in practice the speed benefit is lost when inserting the phone – though is there when removing it.

The Nodus case feels nice. It’s decent-quality soft leather. But the drawback of any folio case is the whole thing becomes significantly thicker, and is less convenient to use as you have to open the flap first. It feels particularly thick if you fold the flap behind the phone for a call. The soft felt interior is also a real dust magnet.

This is the design you want for full protection, but I fairly quickly decided I’d rather have less protection in a slimmer design.

The Nodus Access Case is available in four colors for $48.75. 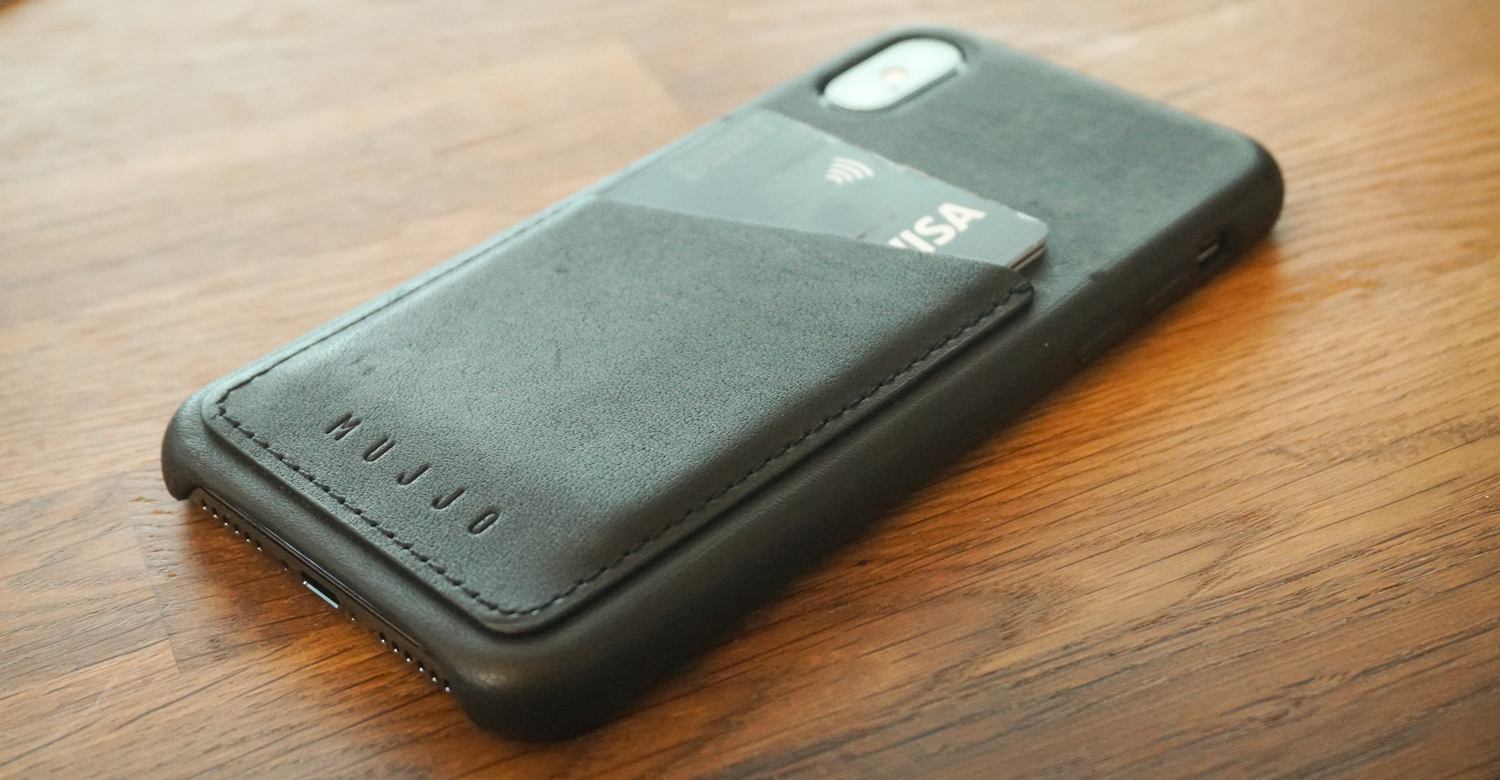 The Mujjo is like the Apple Leather Case, but with the addition of a card slot. This is a similar design to the iPhone 6/6S case that I really liked, though with the buttons covered. It adds very little bulk to the phone, the rear casing sitting flush with the camera module, and retains the iPhone X feeling in the hand that I really love. By slipping a card or three into the slot (three cards in the above photo), that allows me to go out without a wallet – even in London, there are some transactions you can’t make with Apple Pay.

Although this case doesn’t fully protect the screen, there is enough of a lip all round that I think you’d have to be unlucky for the screen to hit anything in a drop. I’ve been using the Mujjo case for the last few days, and so far suspect that I may leave it on permanently.

The Mujjo Full Leather Wallet case is available in eight colours for $49.95.

Two weeks in, then, I’m even more impressed with the iPhone X than I was last time. This is an astonishingly good phone and an equally good camera, and it really is worth the eye-watering price.

Again, if you have an iPhone X yourself, please share your own experiences in the comments. If you don’t, and have any questions, please ask and I’ll aim to answer them here or in a future piece.