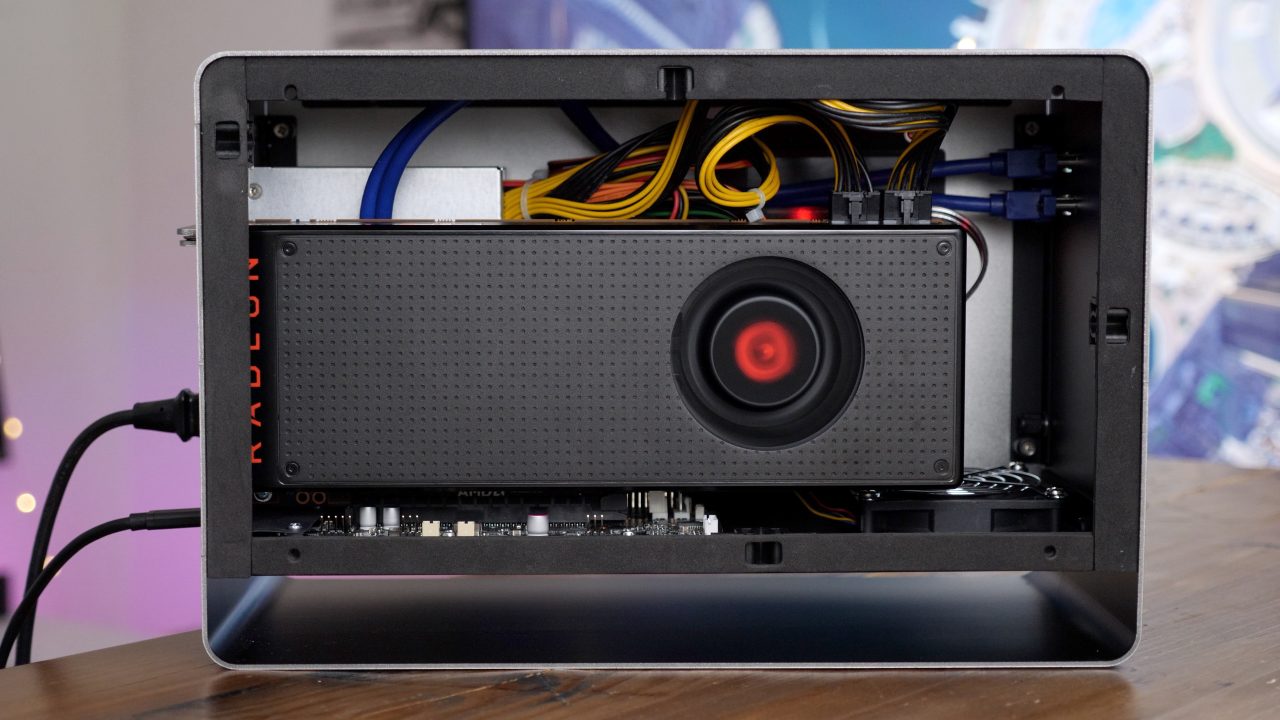 When Apple announced that it would lend official support to eGPU setups via Thunderbolt 3, I was extremely happy with the news. It means adding more graphical power on demand to Thunderbolt 3-enabled Macs like the MacBook Pro.

That said, eGPU support is still being fleshed out in macOS High Sierra, and Apple has stated that the situation will be further addressed in the spring of 2018. In the meantime, progress has been made on the eGPU front, albeit slowly.

Just for the fun of it I decided to test the Sapphire Radeon RX Vega 64 inside of a Mantiz Venus external graphics box connected to a 2017 13-inch MacBook Pro. Although official driver support isn’t yet there, I can report that when running the latest macOS High Sierra 10.13.2, the RX Vega 64 does work to some degree. Here’s a hands-on video look at what I found.

One of the great things about the Mantiz Venus is that it also works as a dock. It features several USB 3.0 ports, including a couple on front, and even a Gigabit Ethernet port for network connectivity.

On the inside of the box, you’ll find a SATA 3 connector and 2.5-inch drive mount, which can be used to save large files, such as game installs on an external SSD. This is especially useful for my 13-inch entry-level MacBook Pro, since it only comes with a paltry 128GB of storage space.

The RX Vega 64 is a blower-style card that fits nicely inside of the Mantiz Venus. I’ve found that the Venus isn’t long enough for some of the larger cards, like the ASUS ROG Strix RX 580, but it accommodates the Sapphire Radeon RX Vega 64 with room to spare.

Getting an eGPU setup to work with the latest macOS High Sierra 10.3.2 beta version is super simple. There are no hacks or workarounds that you’ll need to employ, as it’s just plug and play. 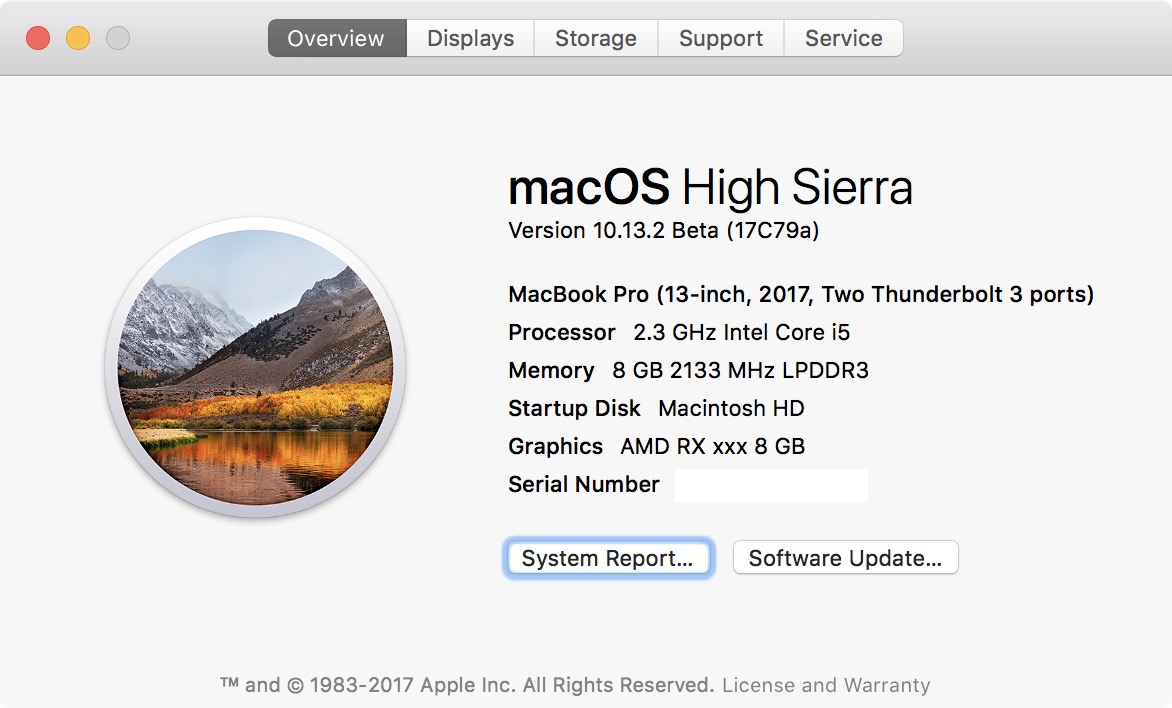 Once you connect a Thunderbolt 3 cable from the Mantiz Venus to the MacBook Pro, macOS High Sierra will ask you to log out to enable the external GPU. After logging out, external graphics support should kick in. Keep in mind that you’ll need to be connected to an external display to make this work, as internal display acceleration is not yet available on macOS High Sierra. We’re hoping that internal display acceleration is something that we’ll see Apple address this coming spring. 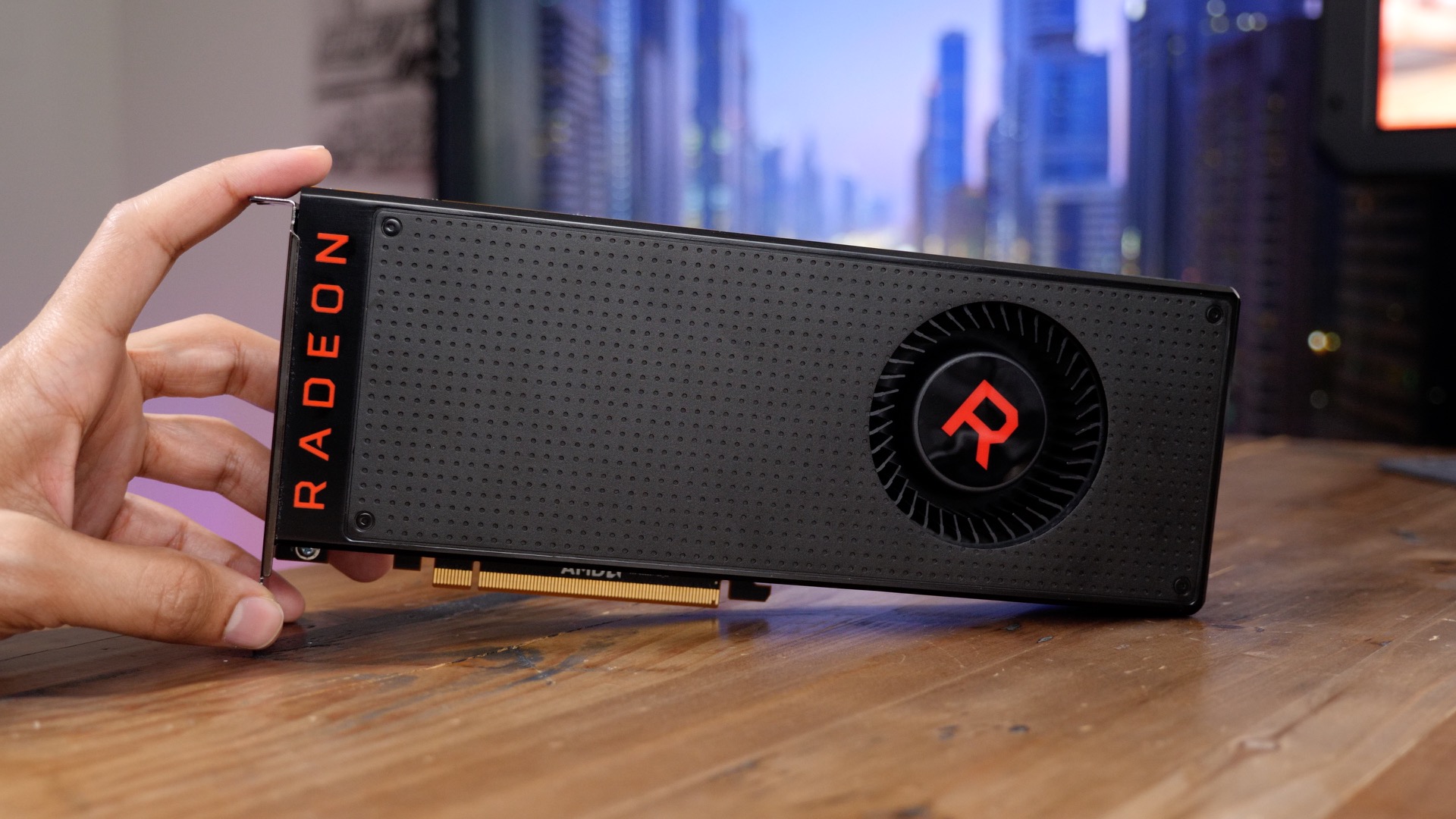 Just to reiterate, driver support isn’t official and still quite obviously immature. For example, the fans on my RX Vega 64 blast at full speed, even when the MacBook Pro is sitting idle with all apps closed. And System Information recognizes that external graphics are connected, but it won’t properly identify the card. 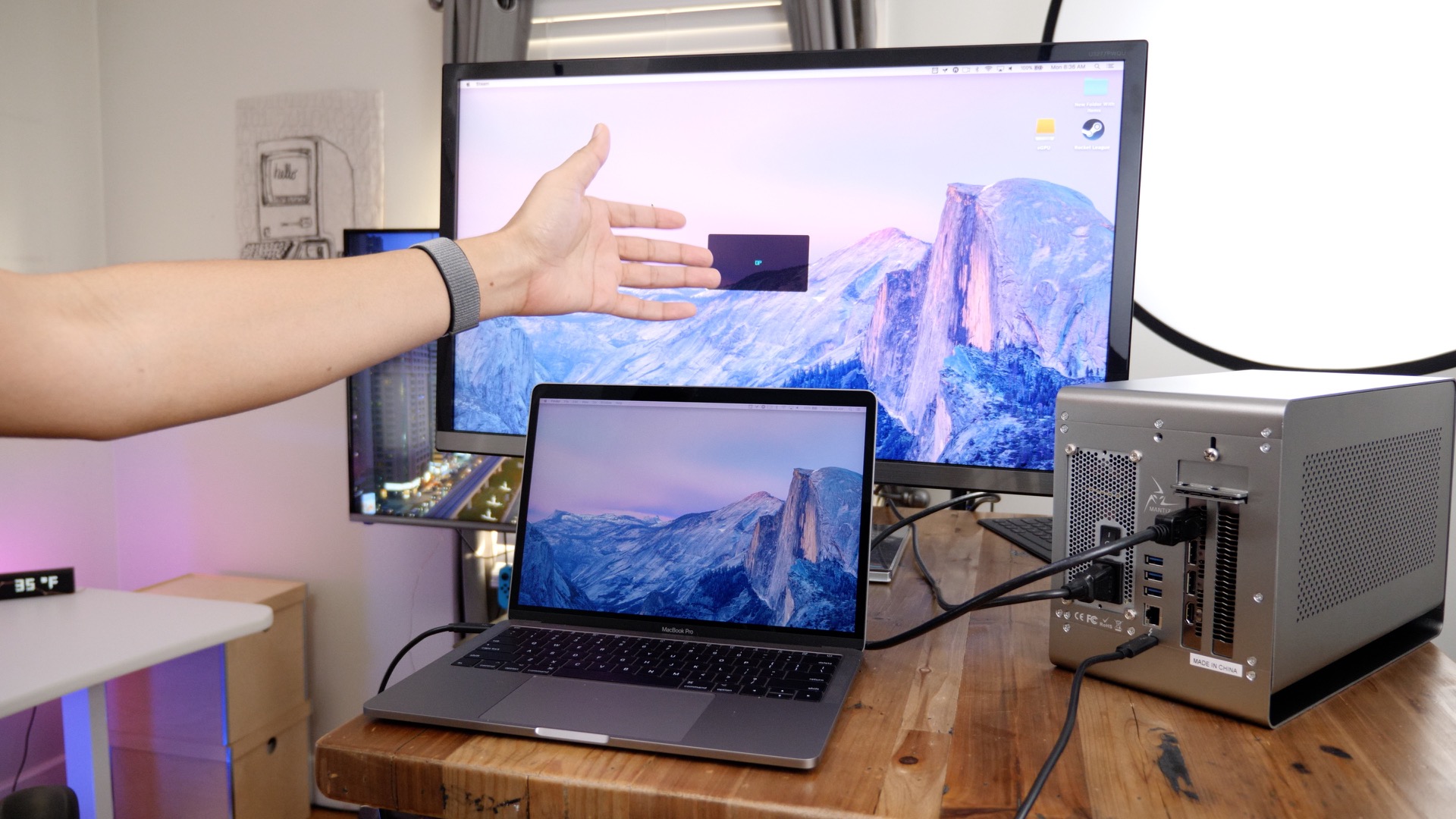 Final Cut Pro X, an app that those looking to adopt an eGPU might be keenly interested in, crashes when external graphics are connected. A major update to FCP X is in the cards, but I have no idea if it will fix the crashing issue. 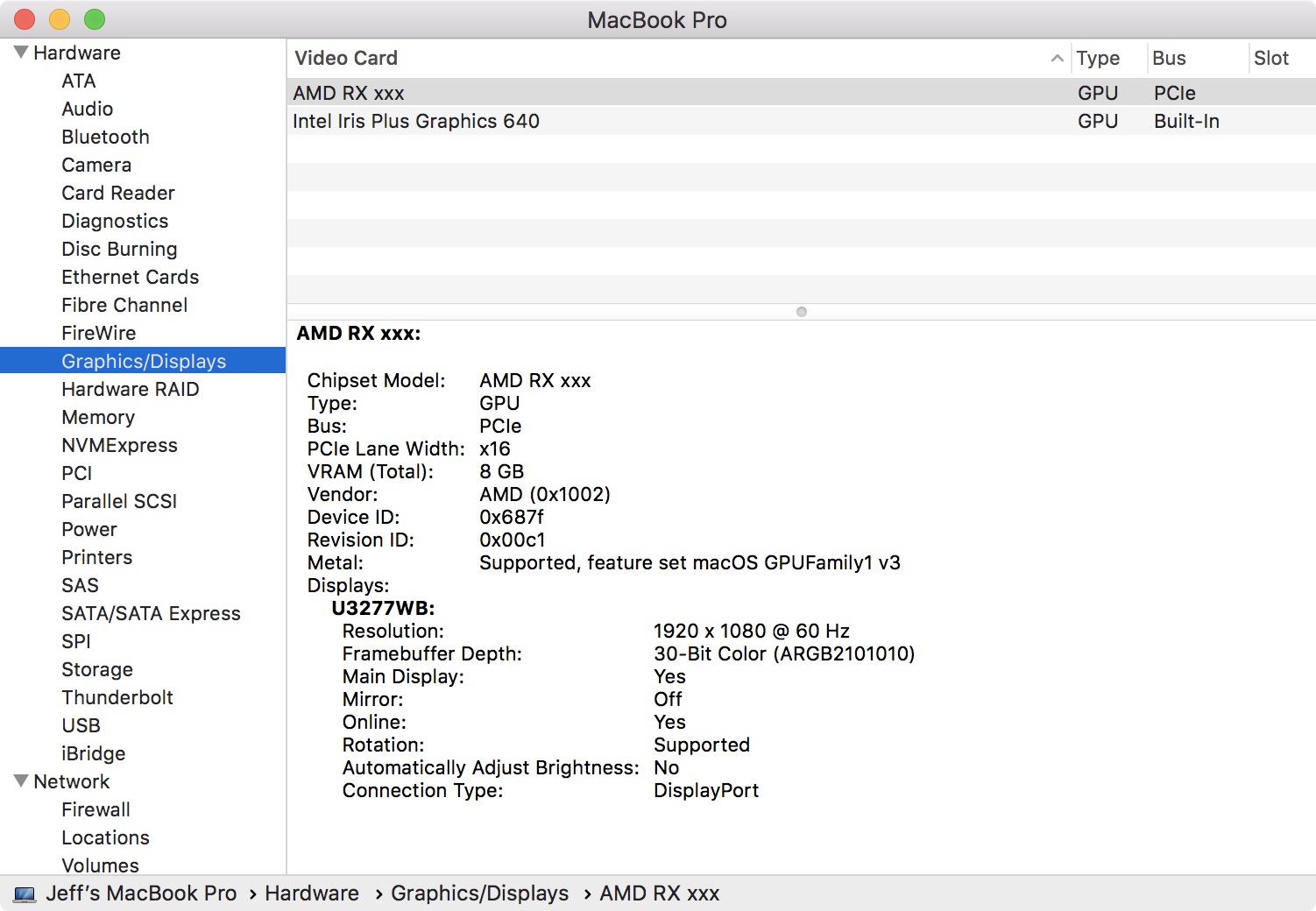 I’m hopeful that once the iMac Pro launches, better support for the RX Vega will appear for those running eGPU setups. The iMac Pro will ship with a Vega 56 or Vega 64 GPU, but only time will tell whether or not this will positively affect custom eGPU setups to any significant degree.

What is clear, however, are the performance gains from using an eGPU. The 13-inch MacBook Pro is only available with an integrated Intel Iris Plus Graphics GPU, so it’s quite anemic when it comes to running graphics-intensive content. With this in mind, any modern compatible external GPU would serve as a noticeable improvement to the integrated graphics. 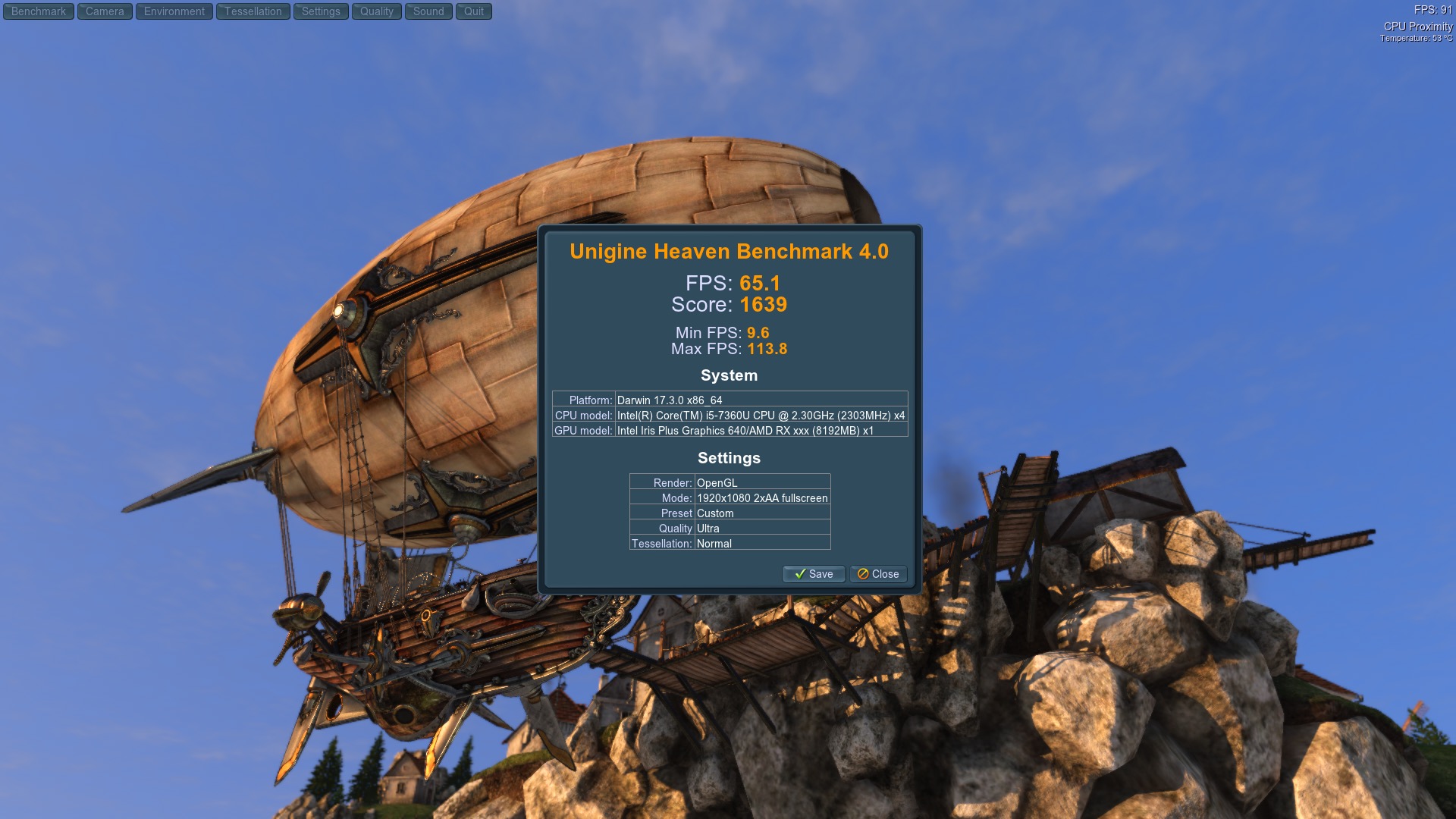 The RX Vega 64 provided a solid boost to the Heaven benchmark that I used to compare with the integrated GPU, and the AMD RX 580. 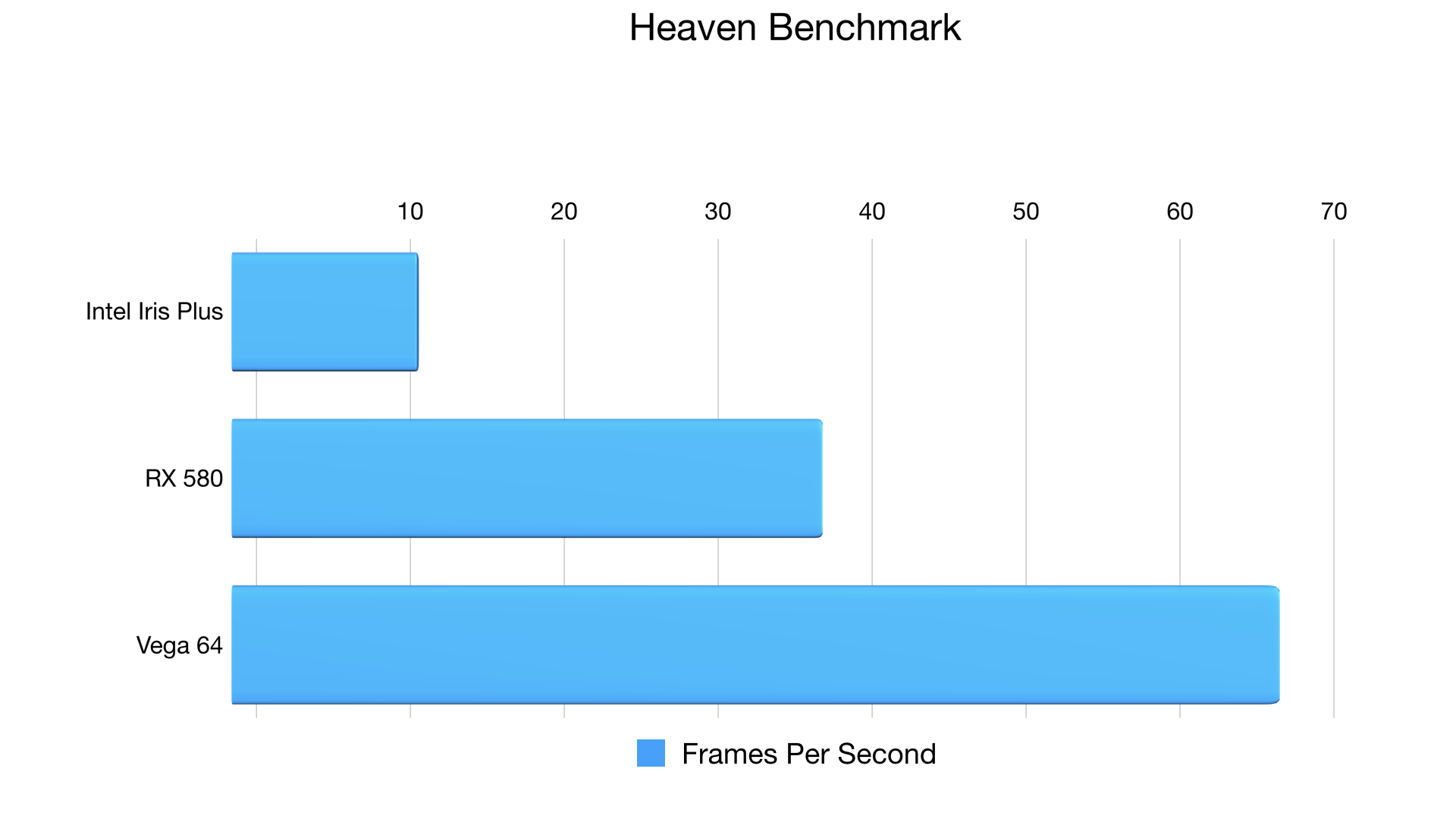 The benchmark was performed using the following settings:

The benchmark data is nothing surprising, but the average frames per second illustrates how much of a difference that an eGPU can make to a run-of-the-mill laptop (from a graphics performance perspective, at least) like the 13-inch MacBook Pro. 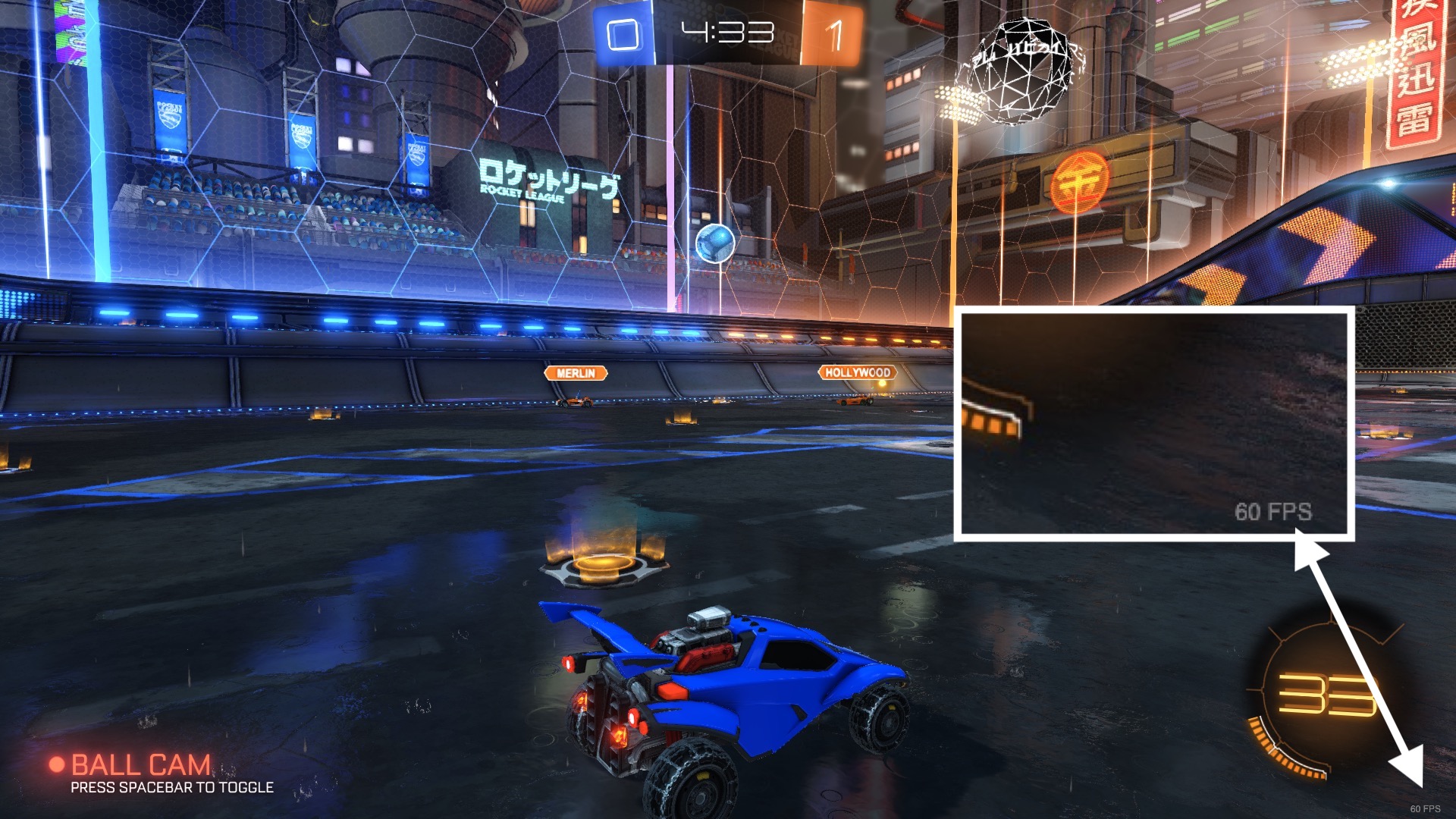 I also tried to play Rocket League at 1920-by-1080 with the integrated GPU at its highest settings. The game was pretty much unplayable on just the MacBook Pro using those settings, but ran at 60 fps when using the eGPU. Again, nothing surprising, but considering how much more viable it is to get an eGPU setup going on macOS these days, it’s worth monitoring the ongoing progress.

Using an eGPU with the macOS High Sierra beta shows promise and is easier than ever. The upcoming release of the iMac Pro, along with additional springtime macOS updates, should yield tangible benefits for those wishing to mate external graphics with an underpowered MacBook Pro or iMac.

The Mantiz Venus is particularly nice, because it functions as a dock that delivers up to 87W of power to a MacBook Pro, while affording access to a SATA 3 drive that can be used to house large items like games. There’s also Gigabit Ethernet access for fast network connectivity, and convenient access to any other peripheral via five USB 3.0 ports. 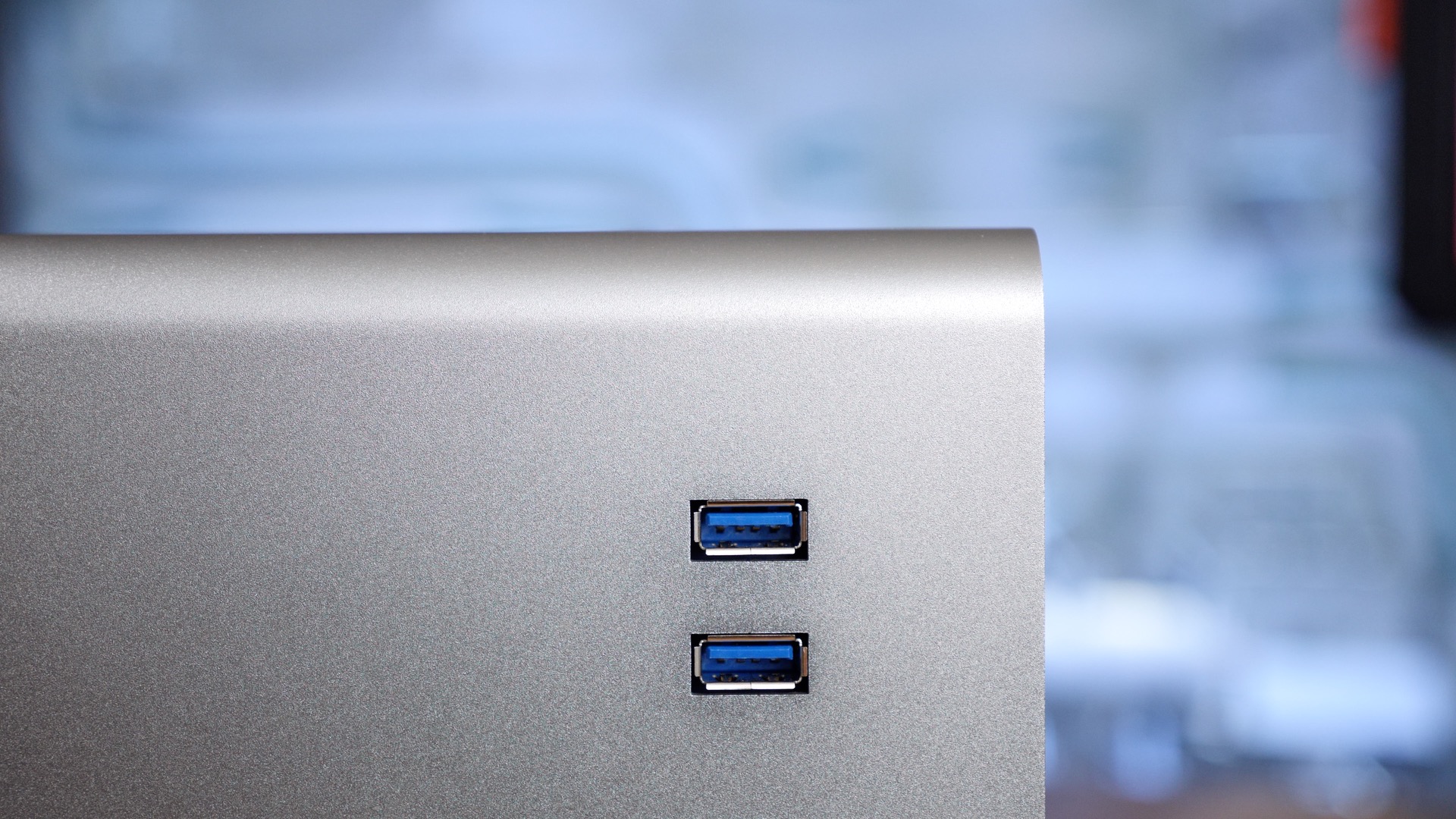 The Mantiz Venus is not only functional with its Gold efficiency 550W PSU, and 8+8 Pin power connectors (supporting graphics cards demanding up to 375W), but its aluminum body with perforated cover looks sleek in its new Space Gray color. 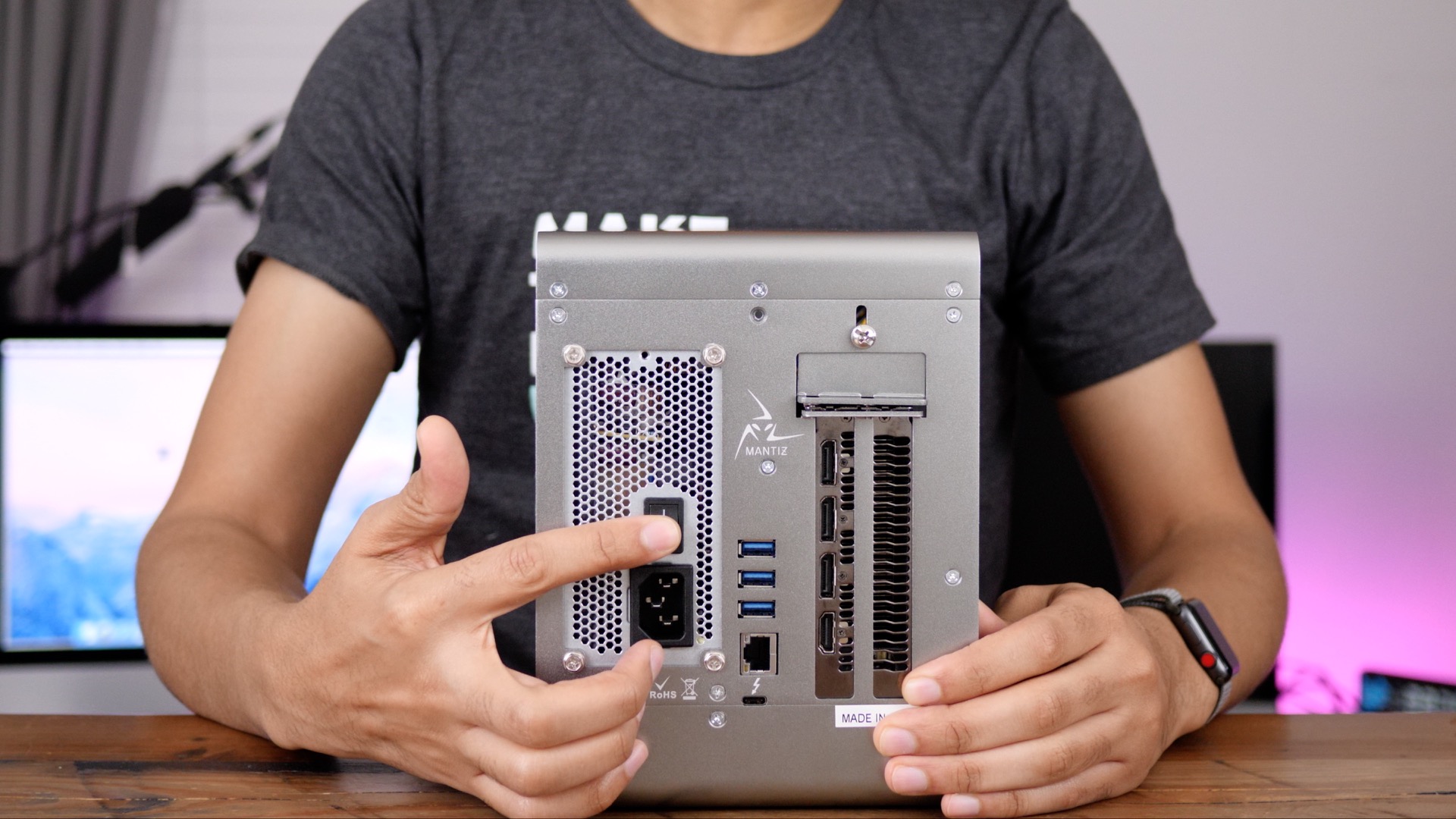 One of the primary areas of focus in Apple’s push towards supporting external graphics has much to do with VR support. The upcoming Final Cut Pro 10.4 update will prominently support VR workflows, and Apple’s own External Graphics Development Kit aimed at developers working on VR content. The HTC Vive is currently the only VR headset that works with macOS, although support for it won’t officially be available to consumers until next year. 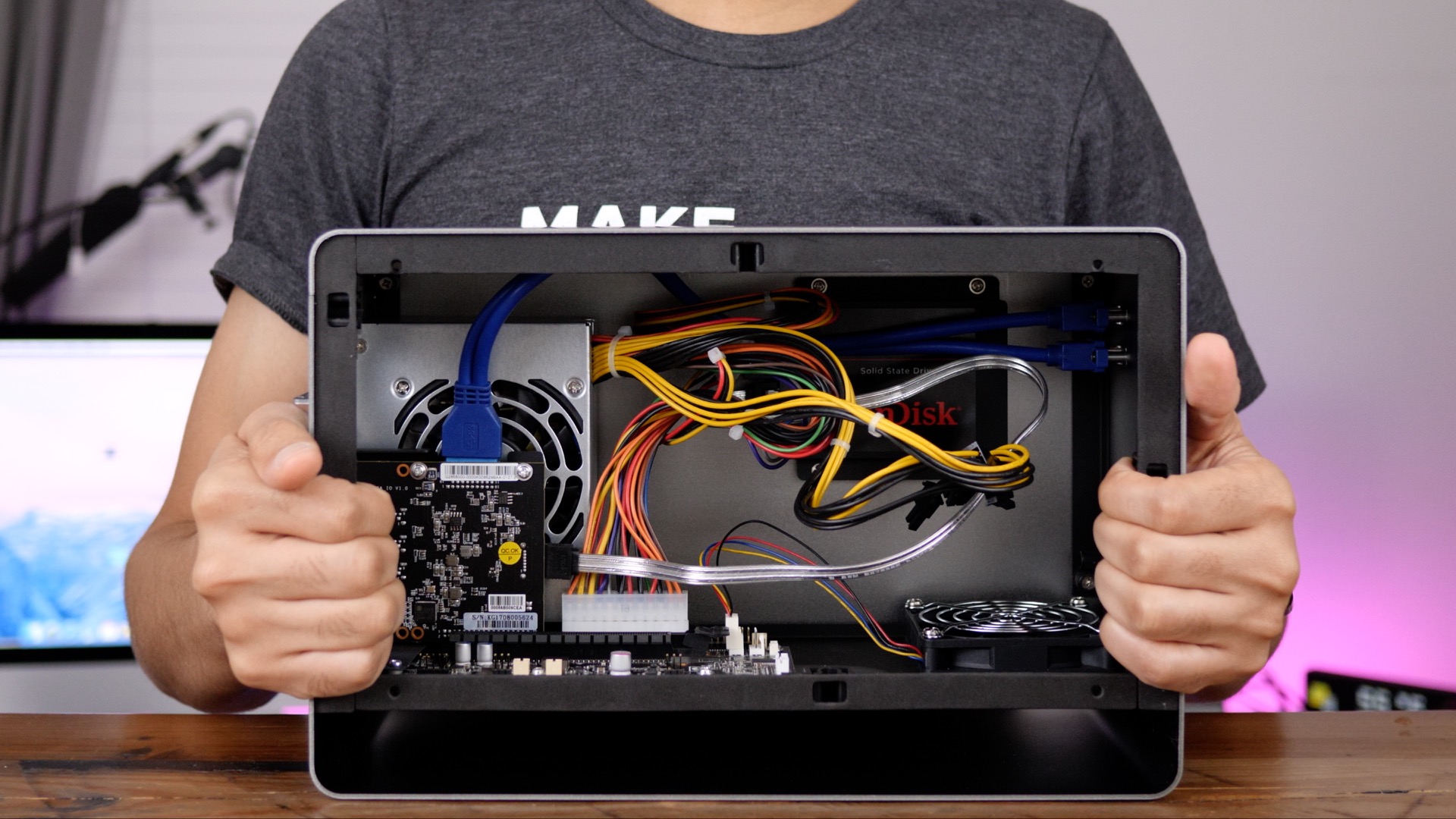 I recently got my hands on the HTC Vive thanks to the kind folks at HTC, and plan on testing it with my MacBook Pro + eGPU setup. Stay tuned for further updates as I share my experiences with VR on Mac.