Pixelmator Pro is now available to buy in the Mac App Store ($60). The new app takes inspiration from the original widely-beloved Pixelmator and pushes design and functionality forward.

Whereas standard Pixelmator felt like an app I had full knowledge of, Pixelmator Pro adds a lot more depth in every respect.

Effects and color presets are now built up out of other adjustments and you can tweak each individual value, mix in new adjustments, and save out entirely new effects to use time and time again.

In terms of interface, the most high-level actions are positioned in a top-right toolbar: crop, canvas size and rotation, share and a button to reveal all the rich editing features.

Clicking the far-right button toggles visibility of the Tools sidebar. This is where the meat of the app is. Selecting a tool presents its UI as a pane (or multiple panes) on the right-hand side. The app certainly takes a lot of inspiration from the Apple Photos editing experience, taken into the professional realm feature-wise.

Effects and color adjustments are a lot more powerful with Pixelmator Pro. There are all non-destructive for a start. Moreover, each effect is made up of multiple smaller adjustments (which would be standalone effects in their own right in a lesser app). For example, the Grainy preset effect is built up of Sharpen Luminance and Grain effects.

You can tweak each of the parameters for each effect, change the order, see changes in realtime, and add even more effects to combine everything together. You can use a set of effects for one particular image or save it out as its own dedicated preset to use for multiple projects. Lines clearly point to where the centre of an effect is applied and you can drag the circle to retarget, like in this Vignette example. 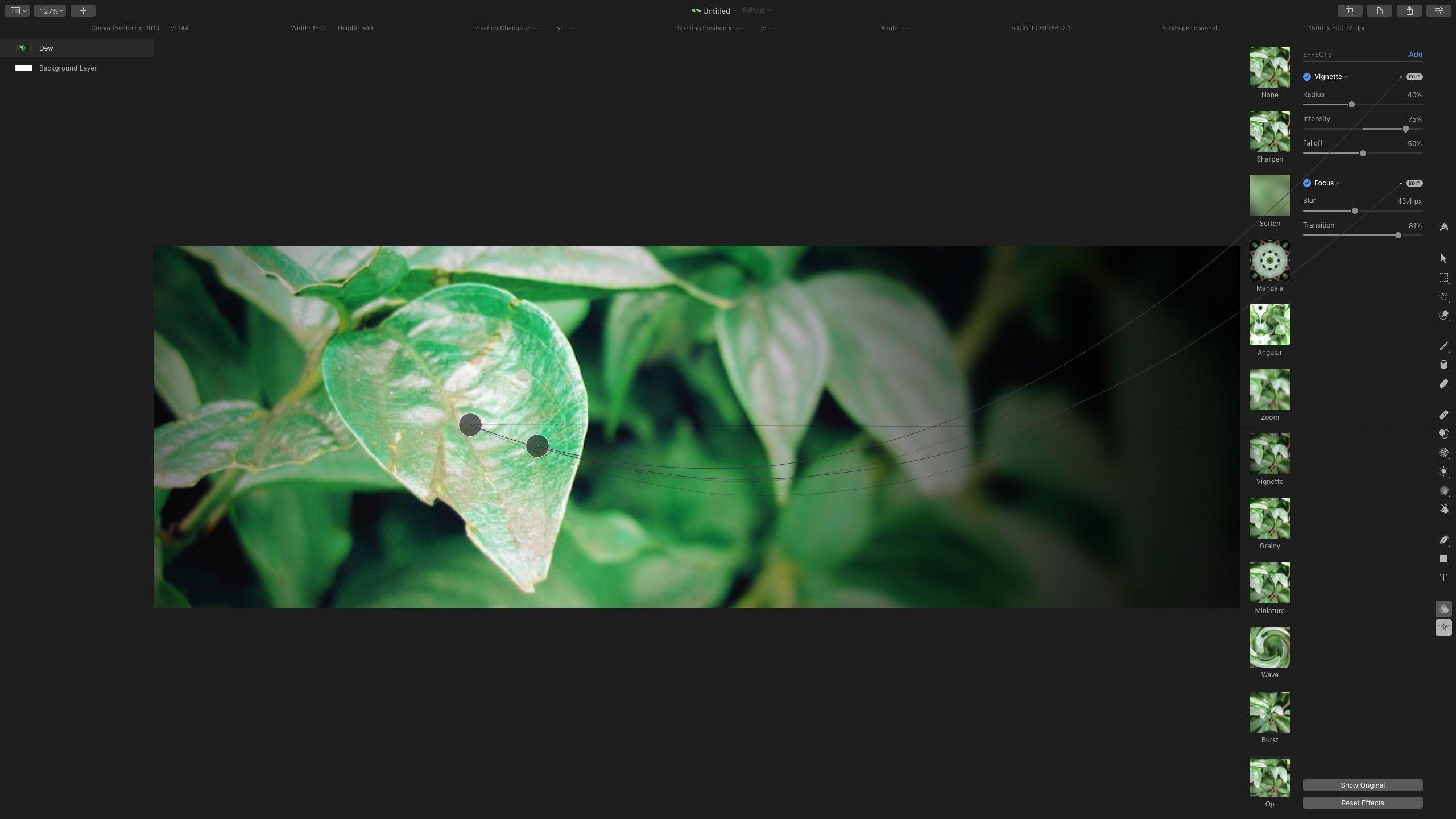 Color adjustments work in much the same way, presets made up of more adjustments. Honestly, in this area, I am out of my depth with most of these settings but it certainly looks powerful. All of the histograms update instantaneously as you make changes and you can tap a Show Original button to compare your changes. Again, everything is non-destructive. 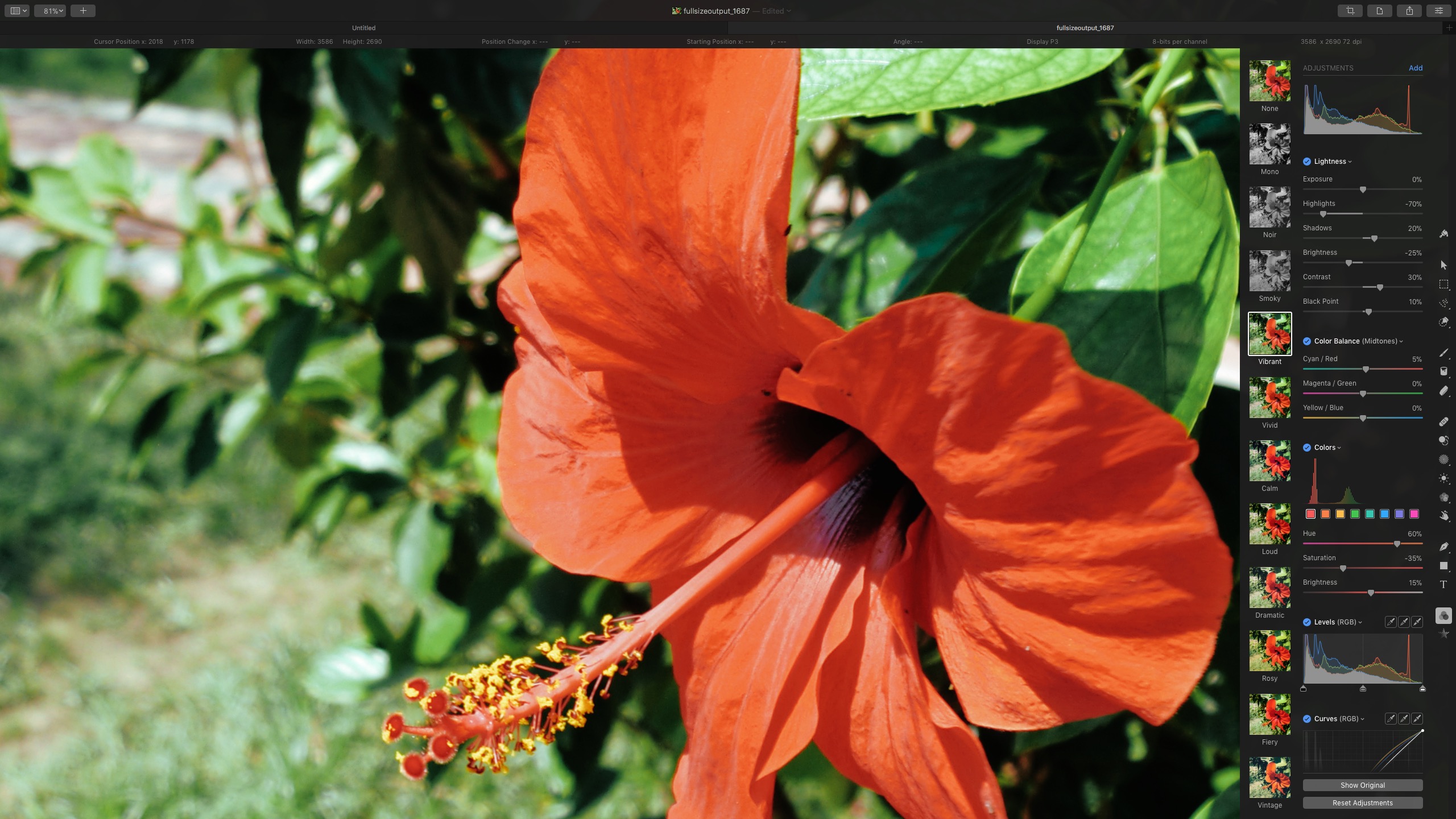 9to5Mac had an early hands-on with Pixelmator Pro ahead of the launch. With no more reliance of floating palettes, everything is neatly housed in a single window. You can reliably know where something will be, once you have learned your way around the app. I have been using the app for a couple of days and I am still hunting in the Tools sidebar to find what I’m looking for.

I think the extreme lack of color here hurts — my brain struggles to identify the little glyphs by shape alone. The palettes in non-pro Pixelmator use full-color icons and it’s a lot easier to distinguish each little icon because of the visual variation. If you hover your mouse over the Tools in Pixelmator Pro, then text labels fade in to annotate each button.

I’m sure finding the right tool will get more natural as I have more time with the app but a setting to have full-color icons or persistent text labels would be appreciated. Once I am in the right tool, I love that everything is housed in a single place in the current context and the problem of searching my desktop for the right tools palette is no longer something I have to worry about.

It feels like Pixelmator Pro is designed for use on big monitors, like iMac sized screens. Due to the persistent panes on left and right, the app demands a lot of horizontal vertical space. The app really shines in full-screen mode on a spacious 4K display canvas (or higher).

Fitting all of the interface in one window is a squeeze on smaller laptop screens. Even in full-screen mode, Pixelmator Pro running on my 15-inch MacBook Pro feels a little cramped. In the gallery above, you can see the same document open on my laptop screen and external screen. Annoyingly, the rail of preset brush names are still truncated on my external display and you can’t choose to make it wider.

It is also worth pointing out that Pixelmator Pro is as much a reset as it is an advancement over the existing Pixelmator. This means a handful of features are actually missing from Pro. A big one for me is the lack of custom aspect ratio options for cropping. Right now, you can only pick from 9 preset aspect ratios. 9to5Mac uses 2:1 images for its post headers and the Pro app is simple unable to help me make a 2:1 image currently. I asked the team about this and they said ‘we’ve got some pretty big plans for the Crop tool’ and ‘custom aspect ratios will be added together with several new features’ in the future.

If you use a 2016-2017 MacBook Pro, you’ll notice the Touch Bar is actually blank and unused by Pixelmator Pro (despite Pixelmator originally being demoed at the MacBook Pro Touch Bar launch Apple event as an example of a Touch Bar app). The developers say that this is not a philosophical stance, but the feature was dropped late in development as they weren’t satisfied with the design and promised Touch Bar support would be returning in a forthcoming update to Pixelmator Pro.

In terms of performance, Pixelmator Pro feels very responsive and fast. It uses Apple technologies like Metal and Core Image for its GPU-based rendering pipelines and the app logic is actually built in Swift.

The single-window approach may be jarring but I think a lot of people will really love it. It shares a lot of similarities with the Apple Photos app editing experience, which I like but feel constrained by its capabilities. Pixelmator Pro is almost a direct answer to how to extend the UI into an app with many more features and functions.

You can get Pixelmator Pro from the Mac App Store for $60. (Honestly, it’s refreshing to see a pro app not go down the monthly subscription route). Find out more on the Pixelmator Pro website.

(It’s not entirely clear what will happen to non-Pro Pixelmator, which is currently on sale for $15. The developers have said it will continue to receive updates, but I personally expect it to go mostly into maintenance mode. An iPad version of Pixelmator Pro is in the works.)