It’s hard to believe that I’ve had a comprehensive smart home for less than a year. My first HomeKit purchases were made in January, and the gaps filled in February. Yet the technology had become so much a part of home that it felt really odd (and not a little disconcerting) to be left without it for a couple of weeks.

You always feel a bit like you’re camping for a little while on moving into a new home, when you’re not yet fully unpacked and things aren’t all set up the way you want them. I was surprised just how much of that feeling I got from the lack of home automation.

So it was with some relief that I finally set about rectifying this. Since most of the kit in the old place was included in the sale, we were stating from scratch in our new place …

While this was a drawback in some ways – it meant additional expense, and doing all the setup work all over again – it did have one benefit. Rather than being stuck with what we’d initially thought we wanted, we could use the benefit of experience to decide what we really wanted this time around.

But with a little swearing along the way, everything was up-and-running.

In an ideal world, we’d have fitted smart switches to turn the existing ceiling lights into smart ones, but there are very few smart switches in UK fitment (square rather than rectangular, and 240v rather than 110v). We’ll do this further down the line, when there are HomeKit options available.

The one set of ceiling lights we did want to be smart were the hall lights. I very much like being welcomed home with a lit entranceway, and thought it would be simple to replace the three GU10 downlighters with Hue white ones, activated by two motion sensors – one at either end. That would mean that the lights come on automatically when we open the front door, and also when we walk from the living room down the corridor.

However, it turns out that what I thought were GU10 were in fact MR16. These are the same physical size bulb, but two thin pins instead of two thicker prongs. I think it should be a simple matter to replace the fittings, as the bulb physically fits the same ceiling mount, but that’s a task for another day.

When I’m world dictator, I’m going to put an end to this kind of nonsense. There will be one physical fitting per bulb size …

In the living-room, we have two floor lamps, with four bulbs between them. We fitted both of these with Hue color bulbs, so that they can be used for either conventional white lighting or as mood lights. As white lights, they provide conventional indirect lighting (please pretend not to notice that we still aren’t yet fully unpacked …).

But set to blue and dimmed by 50%, they provide enough light to avoid bumping into things when moving around while still allowing us to appreciate the view through the winter garden. 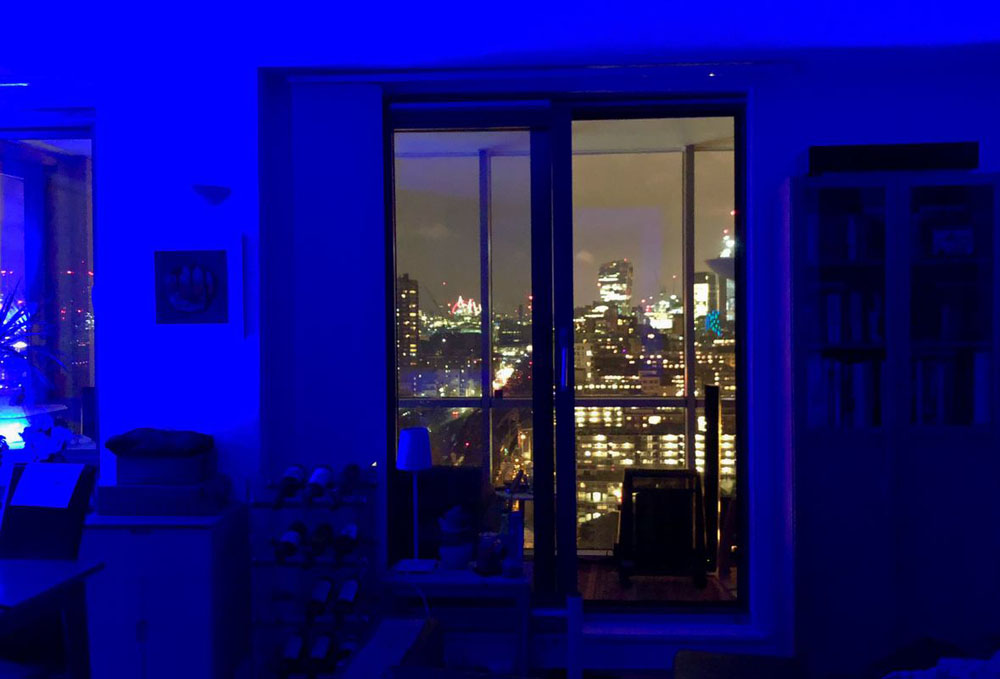 Personally, I’m tempted to add two more lightstrips above the cabinets, but Steph isn’t entirely persuaded, and we do have more home projects to fund …

We also fitted a motion sensor off to one side of the alcove so it switches the cabinet lighting on (to white) when we walk into the kitchen.

For the bedroom, we both like the welcoming feel of lamps being on before we enter the room, but while I’m happy to switch off my bedside light with a ‘Sleep home’ command to Siri, Steph considers that too much of a faff when she’s ready to sleep. So we fitted Hue color bulbs to my bedside lamp plus an extra one, while Steph’s lamp remains manual.

In the office, I already had a Hue Striplight Plus under my desk, and an Elgato Eve Energy plug socket for the floor lap, so retained the same setup. The ceiling light isn’t used much, so was happy for this to remain a dumb light.

Finally, all the glass in the winter garden (glazed balcony) means that it’s quite cold. Our plan there is to build a raised wooden floor with underfloor heating (which will also allow me to run power to exactly where it is needed). In the meantime, though, we rely on a portable electric radiator to heat the area, and that takes a bit of time to do its job. I’ve therefore used another Elgato Eve Energy plug socket on that so we can turn it on remotely before we venture in. 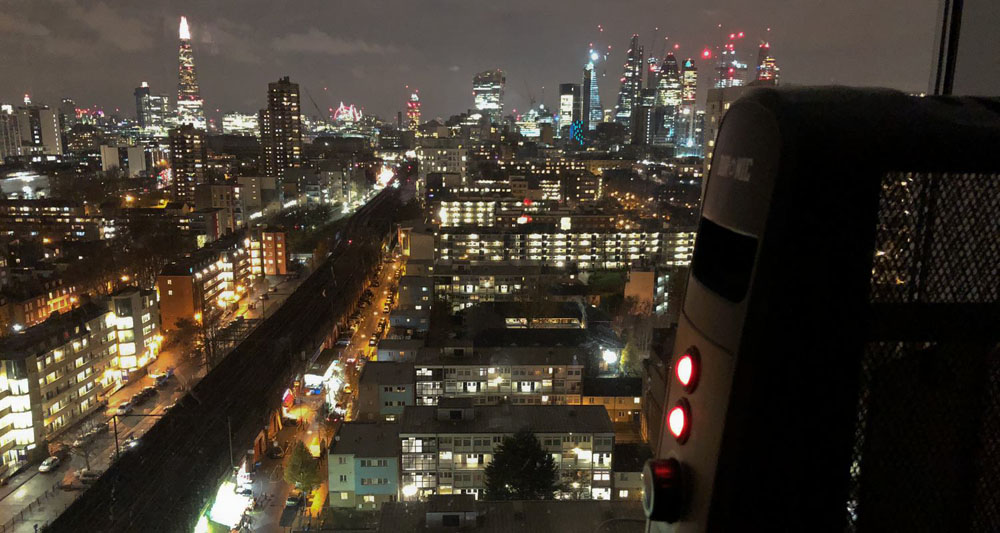 There is actually one other piece of HomeKit lighting to install, and that’s my Nanoleaf Light Panel. With more glass, we have less wall space than before, so I haven’t finalized my plans for this. My current thought is to mount it to a white board which will normally be hung on my office wall, but could be moved to the living-room for parties. I’ll do a future diary piece once I have that set up. In the meantime, check out Zac’s original review and look out for his update with the music visualizer.

I also mentioned last time the unfeasibly expensive cost of HomeKit blinds, but a company has been in touch with what may prove to be a cost-effective approach – we shall see!

All that remained for now was to create the Scenes to automate it all. I created the following scenes:

If it seems odd that the living room lamps go off when we’re on the sofa and on when we go to bed, that’s because we spend most of our evenings in the winter garden. Enjoying the view to the full needs the lights off, then they come back on again to light our way down the hallway until I fit the ceiling lights.

I can’t tell you how good it feels to have an automated home once more! Check out the brief video tour below.