Algoriddim’s djay has made a name for itself over the past few years as a place for beginner DJs to start learning the ins and outs of mixing. Available on the Mac, iPhone, and iPad, Algoriddim’s mixing applications have built a familiar environment for learning. Over the years as the company has grown, so has the application’s abilities. djay Pro 2 for Mac is a clear example of that.

In djay Pro 2, not only has Algoriddim given the application a slightly new look, but also a whole new audio engine. This is the first thing I noticed in testing djay Pro 2 over the weekend. The fader, the effects, and the filters sound better than they ever have. In previous versions of djay, I felt as though the effects were laid over the song instead of being a part of it. This would typically create a strange experience that would pull me out of the mix, but in djay Pro 2 it sounds significantly better. It’s not perfect though. I still feel the audio engine in Native Instruments’ Traktor software is better, but this new engine in djay Pro 2 is the best it has ever been.

I also spent quite a bit of time with the exciting new Automix AI. This standout feature will automatically take your music and mix it for you live, in a way I haven’t seen any other software do. Algoriddim says they used “machine learning and training sets from human DJs” to teach the system how to mix automatically. In using it over the weekend, I found that Automix AI sees the best in and out points in songs to transition and even controls the EQs on-the-fly. This creates as much of a hands-off approach to mixing as possible. 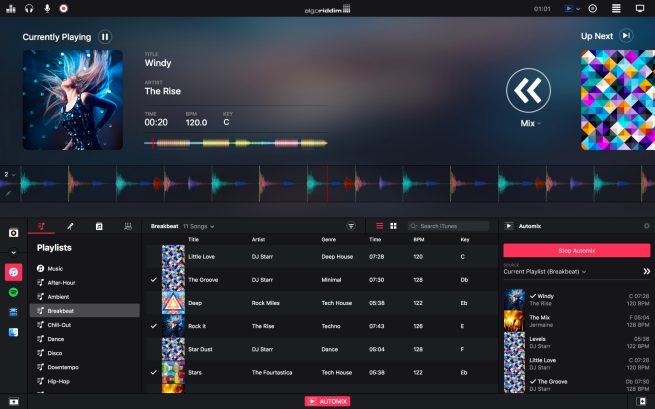 While I would never use Automix AI in a live environment, it is definitely good enough to leave running in the background or even for beginners. When Automix AI is running, it visually shows you where and when it will transition. If you switch to the standard deck interface during a song transition, you’ll even see how Automix AI is raising and lowering EQs at that moment. This is an excellent way for a beginner to quickly grasp the concepts of understanding the mix as it happens live, instead of just watching a DJ turn a bunch of knobs.

One of the other exciting new features in djay Pro 2 for Mac is the addition of PhotoBeat. This feature will let any DJ add a collection of photos to their live mixes, beat-match to music, and share to an external display. Depending on the environment a DJ is working in, this could work really well to create a seamless and energetic experience. djay Pro 2 allows you to beat-match up to every 4 beats or even as little as 1/4 beat. It’s mesmerizing seeing photos flash in front of your eyes perfectly synced to your favorite songs. 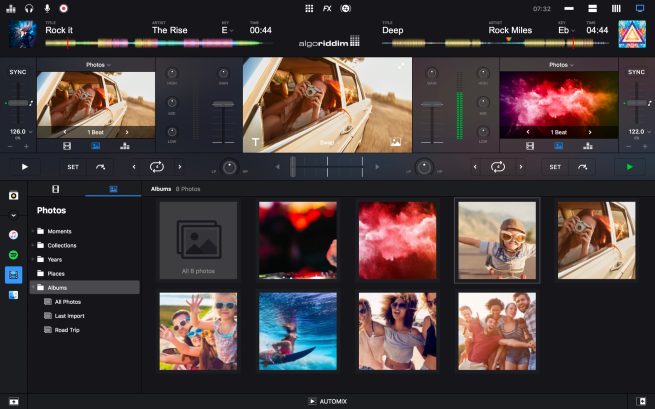 One of my more significant frustrations in mixing with DJ software is getting all of my music together. In the past, vinyl-mixing DJs used to carry crates with all their music. Eventually many moved onto CDs, and now more commonly USB drives are used with CDJs. djay’s approach to handling Spotify was something that intrigued me with the original launch of djay Pro. The idea of having a million song library at your fingertips was exciting.

With djay Pro 2, Algoriddim has revamped their music library management. djay Pro 2 comes with its own queue system now allowing you to add music from multiple sources. I was able to add music from my personal iTunes library, and then added some more I had in Spotify. I then spent a few minutes digging through Spotify’s playlists and added even more that piqued my interest. Combine all of that with the new 320 kbps file support from Spotify, and I think djay has a veritable powerhouse of mobile media library management.

After having used djay Pro 2 over the weekend, I think Algoriddim has set itself apart in the competitive DJ software landscape. With many new companies springing up, and old giants fading away, they have continued to innovate time and time again.

djay Pro 2 for Mac is rolling out now on the Mac App Store at an introductory price of $39.99. A free trial download is available from Algoriddim’s site.