Review: iStorage diskAshur 2, ‘the most secure external SSD in the world’ 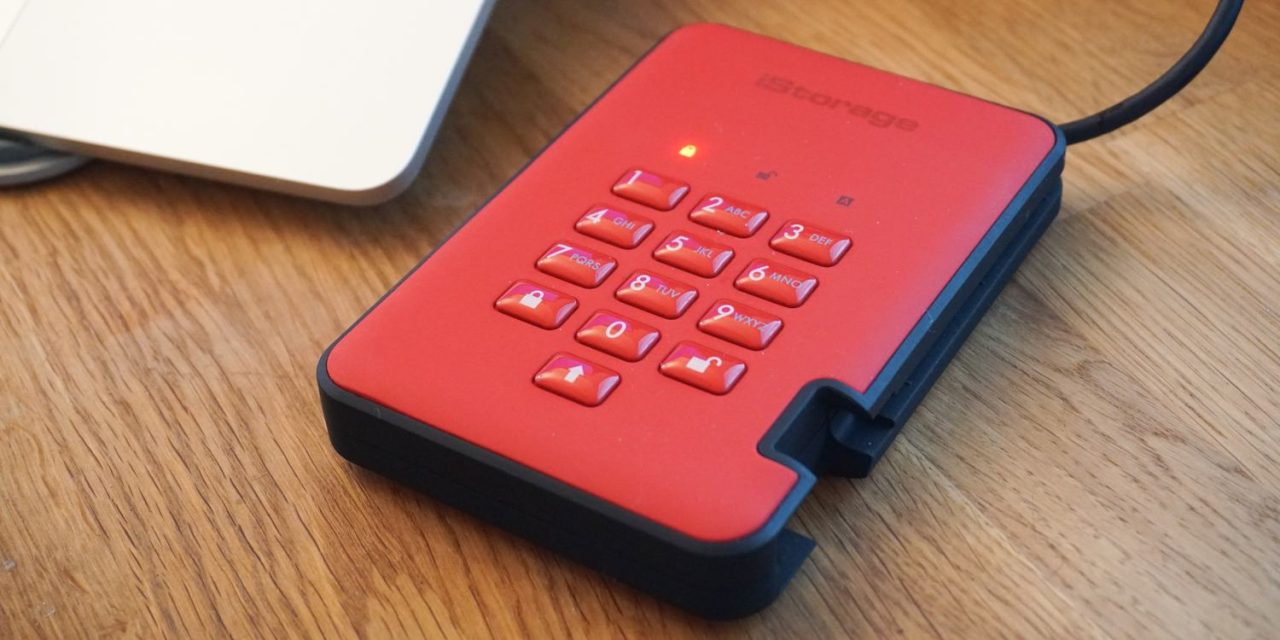 There’s no shortage of external drives around, both spinning metal and SSD, though higher-capacity portable SSDs are still in relatively short supply.

It’s available in a range of four colours: black, red, blue and green. The most obvious distinctive feature is the keypad, which I’ll of course get to, and three LEDs in red, green and blue.

The casing is rubberized, with water and dust resistance to IP56. This isn’t 100% protected against either dust or water, but the dust rating should keep out any harmful particles, and the water rating is good against high pressure jets from any direction, so should be suitable for most uses provided you have no plans to leave it out in the rain.

It’s a USB drive supporting USB 3.1, and has a short built-in cable. Unfortunately this is a USB-A one, so you’ll need an adapter for the current MacBook or MacBook Pro. iStorage is, though, going for maximum compatibility here, with a drive suitable for all platforms (though more on this in a moment) and all devices, with backward-compatibility through to USB 1.1.

iStorage claims read speeds of up to 294Mbps and write of 319Mbps. While this isn’t the absolute fastest drive around, it’s still a very respectable speed. In my tests with Black Magic, I got slightly slower speeds than advertised.

One of the claims made for the drive is universal compatibility – ‘anything with a USB port.’ iStorage says that it’s compatible with MS Windows, macOS, Linux, Chrome, Thin Clients, Zero Clients, Android & Embedded Systems.

The drive by default arrives formatted for Windows, and attempts to reformat it using Disk Utility were unsuccessful: it saw the full capacity of the drive as in use. However, iStorage was able to supply a Mac-formatted drive which worked without any issues.

The USP of the drive is its security features, which the company describes as military-grade. That’s a term that tends to get bandied around without a great deal of specificity, but iStorage lays out the full security specs.

You protect the drive with a PIN of between 7 and 15 digits. That PIN is needed every time you connect the drive. You enter your PIN and then press the unlock button, then wait a few seconds for access. All data written to it is encrypted in real-time, which makes those read/write speeds particularly impressive.

The drive is also protected against physical attack. The SSD is encased in epoxy resin inside a tamper-proof external case, and monitors for physical attack. Any attempt to tamper with the drive results in it being automatically erased.

The PIN gives you a total of 15 attempts – though the way the protection works makes it appear to a naive attacker than they only get five goes. After five incorrect PIN attempts, the drive locks until it is disconnected and reconnected. The same thing happens again after attempts 6-10. At that point, you have to disconnect and reconnect the drive again, this time while holding down the shift key. You also have to start by entering the iStorage preset PIN before entering your personal PIN.

After 15 incorrect attempts, the drive considers itself under serious attack and deletes the encryption key, rendering the encrypted data permanently inaccessible.

You can set an unattended auto-lock time of between 5 and 99 minutes, and you can instantly manually lock the drive by pressing the lock button at any point. Finally, there is a duress feature: enter the self-destruct PIN and it will delete the encryption key, all stored PINs and wipe the drive.

Pricing ranges from $174 for the 128GB model to $2374 for the 4TB one. The 2TB drive I tested is $1249. That’s obviously not cheap, but not crazily out of line with other external SSD drives, especially once you get into the higher-capacity ranges.

The real question is whether you need this level of security. For the average consumer, it’s overkill, but I could definitely see some professional users appreciating it. Carrying around external drives with commercially-sensitive materials on them – product designs, in-progress apps, marketing materials for unannounced products, customer databases and so on – is always a little nerve-wracking. There have been all kinds of reports of drives being left in embarrassing places like bars and trains.

For a startup, the peace of mind could well be worth the relatively small premium you’re paying for heavy-duty security. For professional freelancers, it could even be turned into a selling-point for clients. So if you need an external SSD, and could use the reassurance this one brings, it could be very good value.

The iStorage diskAshur 2 is available from the company’s Amazon store from $174. Lower-cost secure hard drives are also available, along with USB keys.