There are some brand looks you recognize at a glance, and Marshall is one of those. Black casing with rounded edges. Black speaker grille with gold surround. And, of course, the brandname in gold script across the front.

Marshall speakers and amps are as closely associated with rock bands as the electric guitar. From buskers on the street with a single unit to banks of speakers on the stage of big band concerts, it’s hard to picture the scene without that Marshall name.

So when the company offered a range of AirPlay speakers, it would have been impossible to resist trying one out …

The speaker range isn’t entirely new: the company has offered Bluetooth speakers under the same names for some time. But for my money, AirPlay is a non-negotiable requirement for anything bigger or more expensive than a travel speaker – and that’s what Marshall has added in this latest incarnation.

You also get Chromecast, Spotify Connect, Bluetooth 4.2 – as well as 3.5mm and RCA input sockets.

The range comprises three speakers, each of a different size and power, but all with essentially the same design and feature set. All also get the ‘Multi-Room’ suffix, as Marshall sees the ability to network them together – either through AirPlay or through its own app – as a key feature.

There’s a long-standing sales technique for up-selling someone from a cheaper model to a more expensive one: add a third model at the top-end. Hardly anyone buys it, but for anyone unsure which to go for, the middle one becomes the default option.

I have to say, I strongly suspect that Marshall is employing that tactic here. Unless you’re going to have the Woburn as your sole main-room speaker – which is possible, but perhaps unlikely – then it’s hard to see what role it could play. The Stanmore, which I tested, will more than fill any normal-sized room with sound.

I covered most of this in the intro: it looks exactly the way you’d expect a Marshall speaker to look.

There’s a real quality feel to it. It’s heavy, at just over 10 pounds. It feels like you could safely stand on it without it noticing, let alone caring. And the brass controls set into the brass plate on the top feel as good as they look.

But as traditional as it looks, there’s a modern slant too, in the form of red LED indicators. Where a traditional speaker would have a black dot on the dial that you’d align with black lines on the plate, there is instead no marker on the dials, and red LED lines in place of black painted ones. It looks expensive.

The feel of the knobs doesn’t disappoint either. They feel solid, weighty, and the source selector has positive clicks.

Unlike traditional knobs, that turn from 0 to 10 with a stop at each end, these ones turn freely – their functionality is set in software. Otherwise, they could be from any Marshall equipment made any time in the last 50 or so years.

Oh, and it is also available in white, but that’s just wrong. I get that people want the choice, and Marshall is catering to that, but c’mon, Marshall speakers are black. The company should have had the courage of its convictions here.

If you want to use it as a Bluetooth speaker, simply select Bluetooth on the source dial, and connect in the usual way. AirPlay setup, though, has to be done through the companion app, which is a slightly clunky and non-intuitive approach. That’s a one-time process, though: once completed, it acts like any other AirPlay speaker.

You also have the option of using the app to set any of the seven available presets. These are selected on the source dial, and can be either Internet radio stations or Spotify playlists. Sadly there’s no option to select Apple Music playlists, something I hope Marshall will consider adding in future.

Although the speaker is of the kind of size that looks like it could be moved from room to room as desired – it’s roughly 14x7x7 inches – in fact it’s a lot less portable than it looks. At 10.36lbs, it’s a fair weight to lug around, and there’s no handle or handhold slots. That makes it a bit of an awkward beast to move around. If you want to use it in more than one room, Marshall would clearly like you to buy more than one of them.

The Stanmore has a total of 80 watts power, comprising a 50-watt woofer and two 15-watt tweeters. Each driver has its own Class D amp.

You’d expect this setup to pump out a lot of sound, and you won’t be disappointed. Ramp the volume all the way up to 10, and you’ll have the neighbours banging on the wall in no time. It’s painfully loud in anything but a large room.

Impressively, there’s no discernible distortion even at ‘turn that thing down now or I’m calling the police’ levels.

Which is not to say the sound is completely clean. There’s a distinctive Marshall sound, which I can best describe as raw and punchy. Both bass and treble are somewhat exaggerated, so you get plenty of feel, but at the expense of accuracy.

If you love B+W, B&O or Sonos, then you should know this isn’t that. But what it is is exactly the sound you expect Marshall to deliver. If you’ve ever listened to some Marshall headphones, you’ll know what you’re getting. And even I – as someone who normally likes a clean, neutral sound – enjoyed it very much when pushing rock tracks through it. Marshall has a signature sound, and the Stanmore provides it.

Marshall also doesn’t want you messing too much with that signature sound. Yes, there are bass and treble knobs between the volume and source ones, but the adjustment range they offer is pretty limited. Marshall has just managed to stop short of adding placebo controls here, and I found the best sound quality was on the default settings. 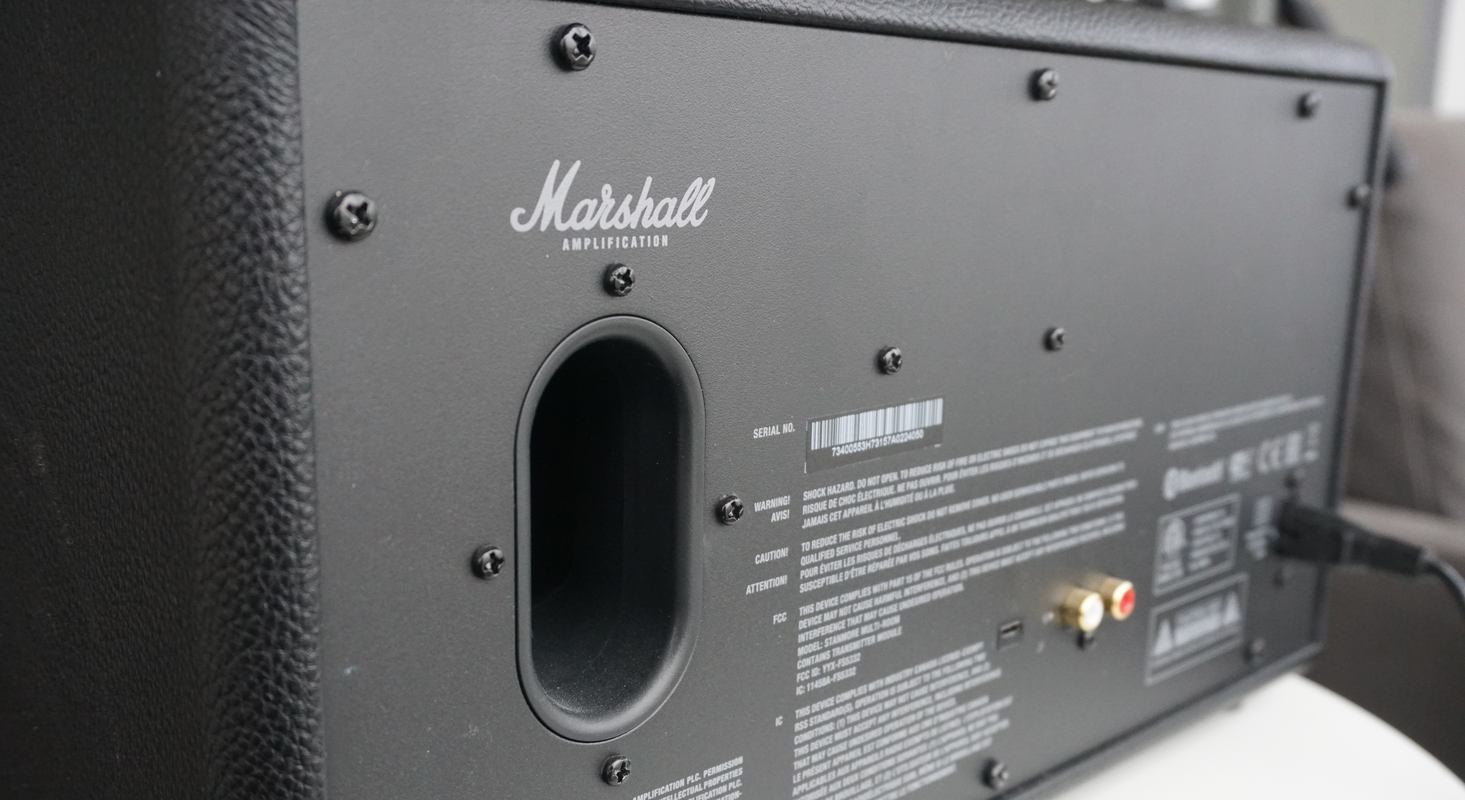 But that’s not unreasonable. They are in the same league, even though they take quite different approaches in terms of both look and sound.

The Sonos is all about clean, minimalist lines and almost invisible controls. The Sonos sound is beautifully neutral and accurate.

The Marshall is brasher. The looks demand your attention, the controls stand out. The sound, too, is brasher. But I wouldn’t say lower in quality, just different. Despite my own normal preferences, I very much enjoyed the sound when playing the kind of music it was built for.

So largely this one comes down to tastes. So long as you know what you’re getting, I don’t think you’ll be disappointed by either.

But there is one other factor at play here. Marshall’s timing is slightly unfortunate, launching its first AirPlay speaker shortly before AirPlay 2 came along. Personally I’d be a little wary of investing in an AirPlay speaker without the chance to see how big a difference the later standard makes. But if that doesn’t concern you, the Stanmore gets you a lot of bang for your buck.

The Marshall Stanmore costs $449. The smaller Marshall Acton costs $350, while the humungous Marshall Woburn costs $599. If buying elsewhere, be sure to check you’re buying the Multi-room model and not the older Bluetooth-only one.