Apple is celebrating the upcoming completion of its newest retail location in France. A new webpage highlights creative sessions arriving soon in Paris. The flagship store was mentioned onstage yesterday by retail SVP Angela Ahrendts during the special event keynote in downtown Brooklyn. An earlier report had confirmed the store would open sometime in November.

Apple’s Champs-Élysées store will be located just down the road from the Arc de Triomphe monument and adjacent to one of France’s most prolific retail districts. The store will complement other luxury shops, restaurants, and theaters on the historic avenue.

A definitive grand opening date hasn’t yet been given, but Apple is promoting the store with the tagline “Ouvert à vos idées les plus folles” or “Open to your wildest ideas.”

“From photo to music to app creation and drawing, our Today at Apple sessions will help you bring your wildest projects to life,” notes Apple. Sessions highlighted include topics of art, design, music, photo, video, activity, and coding. Yesterday, Apple announced that 60 new sessions would soon come to Today at Apple programming around the world.

In Paris, these sessions will take place in what Apple calls one of its “grandest Forums in Europe.” The store’s historic architecture has been restored and now accommodates a sky-lit multi-level atrium with balconies overlooking a Video Wall, trees, and seating below. 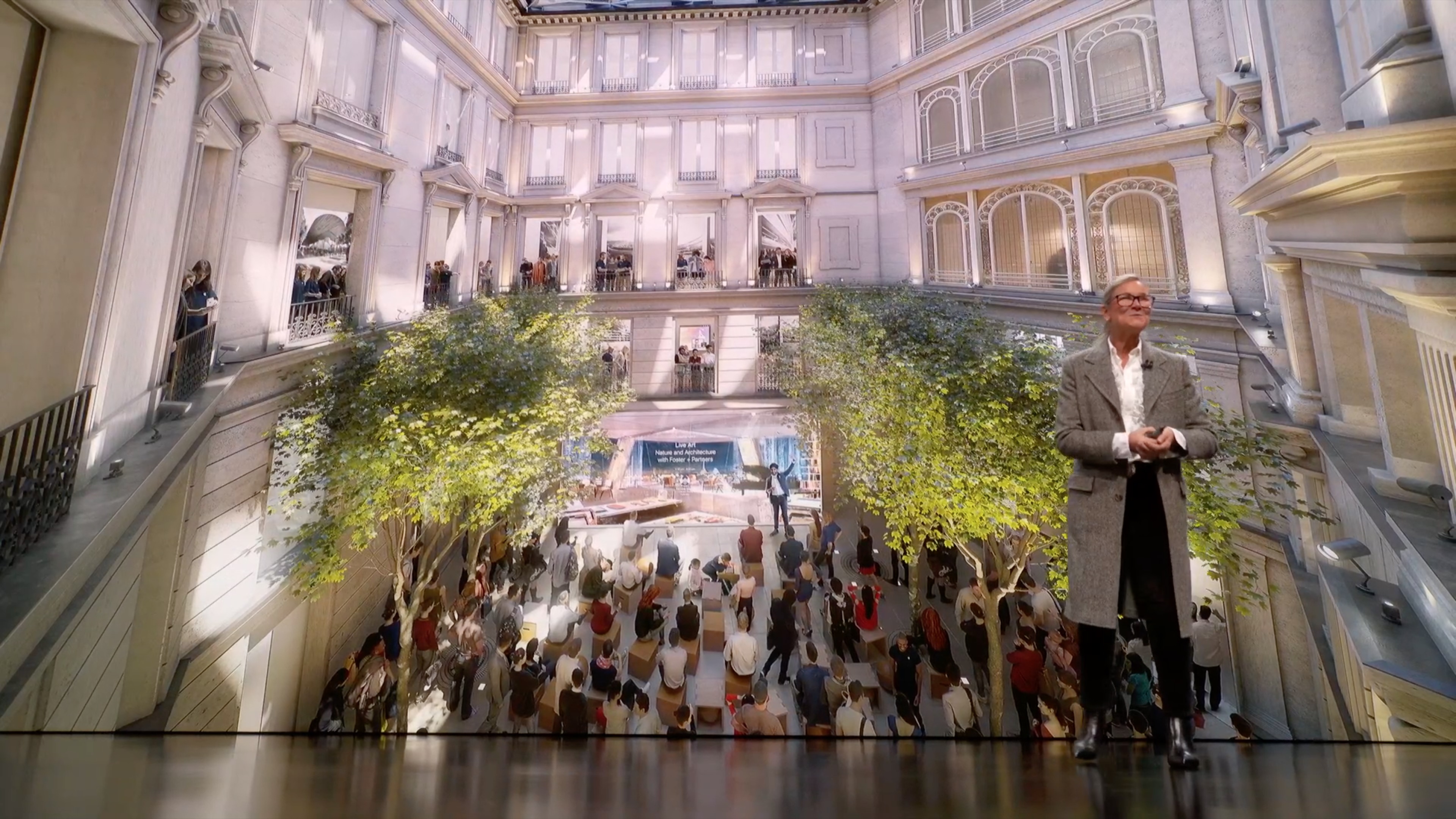 Prior to Apple’s occupancy, the newly renovated space was the home of J.M. Weston, a French shoe retailer. Weston originally opened in the building in 1932 to create the company’s second location, and occupied the space until recently opening a pop-up shop a few blocks down the street.

Apple’s plans for Champs-Élysées have been anticipated for years, but first surfaced with detail near the beginning of 2016, when the company reportedly signed a 12-year lease. During September 2017’s keynote at Steve Jobs Theater, retail SVP Angela Ahrendts displayed a render of the building’s proposed renovations, designed with guidance from Foster + Partners, the architecture firm picked for Apple’s most ambitious projects. In April, real estate firm Hines and Universal-Investment acquired the property and Apple’s long term lease for approximately €600 million.

Apple has enjoyed a short but active retail tenure in France, launching its first location in the country with fanfare at the Carrousel du Louvre in 2009. With the opening on Champs-Élysées, Apple has chosen not to renew its lease at The Louvre and will transition employees to the new store.

The art direction for the store’s opening is really cool. It reminds me of classic motion graphics, like this Saul Bass title sequence: pic.twitter.com/cpKRNhlcRt

In 2015, the company piloted one of three Apple Watch pop-up stores worldwide in Paris, operating the shop until January of 2017. This past summer, Apple screened a self-funded Shot on iPhone short film at its Marché Saint-Germain store. Elsewhere in Europe, Apple has recently completed significant renovations at its Covent Garden store, and earlier this year celebrated the restoration of a historic building in Vienna, marking the company’s first retail location in Austria.

November will also see the reopening of Apple’s Southlake, Texas store and the grand opening of the company’s first location in Thailand.

As always, we welcome your photos from store openings. Follow along with our Apple retail guide for more store news.