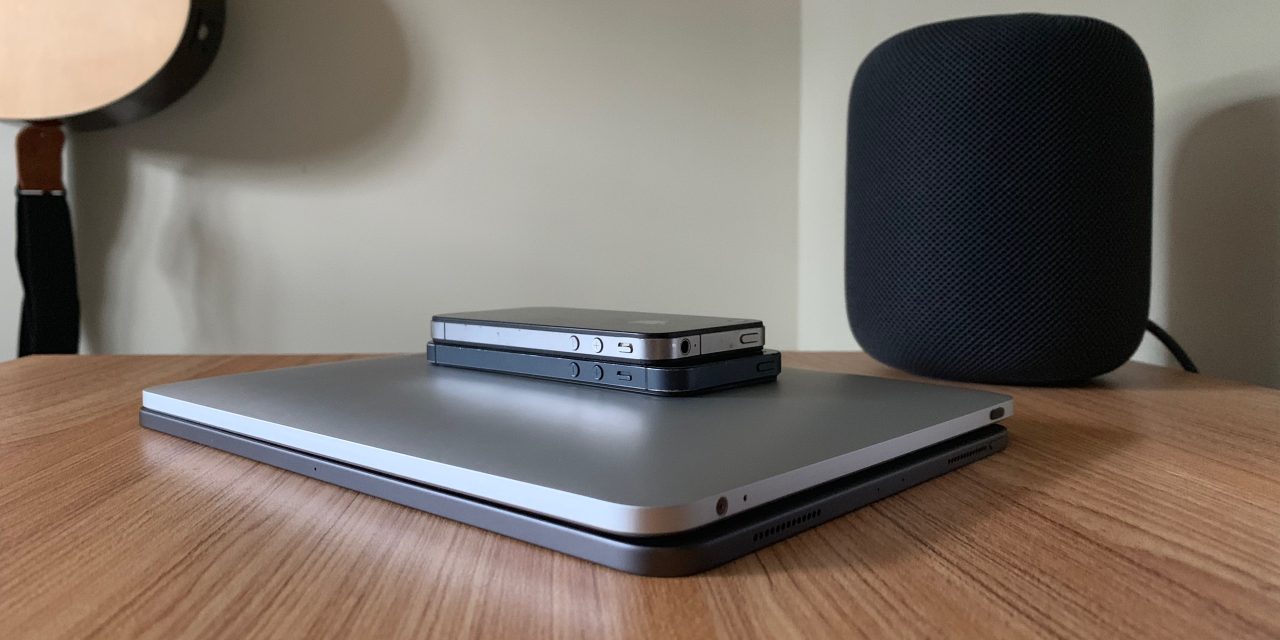 While I upgrade my iPhone every year, my iPad upgrade history trends toward every other generation: iPad 2, fourth-gen, Air, and 9.7-inch Pro. Skipping a generation (with the exception of the fourth-gen to original Air) has served me well as each upgrade is less incremental and more dramatic.

(I later acquired the original iPad — seen above stacked on the new iPad Pro — to collect; the new 11-inch iPad Pro feels like the modern version of that design with similar flat sides and the bulbous back squashed.)

This time around I’m upgrading from the 9.7-inch iPad Pro from early 2016 to the brand new 11-inch iPad Pro. The combination of upgraded specs, an all-new design, and subtly improved accessories is making this step all the more rewarding.

This year, the base model iPad Pro has a larger display and more storage and everything is pricier across the board. $799 for the 11-inch iPad Pro, $179 for the new Smart Keyboard Folio, and $129 for the new Apple Pencil puts you at $1,107.

One difference this year is that back coverage isn’t optional with the Smart Keyboard, but you do get a little less protection for $191 more.

You also get a 1.3-inch larger display, 64GB storage over 32GB, and all the benefits of Face ID over Touch ID and the A12X chip over the A9X chip (including 4GB RAM over 2GB), and 120Hz refresh rate with ProMotion is excellent if you skipped the 2017 iPad Pro revision.

The 11-inch iPad Pro is absolutely thinner in the hand than the 9.7-inch iPad Pro when wrapped in the Apple accessories. That’s definitely noticeable. The depth difference between the two iPads without accessories is harder to perceive: 6.1mm versus 5.9mm.

In terms of overall footprint, the difference between the 11-inch iPad Pro and 9.7-inch iPad Pro is not dramatic. The new iPad Pro is slightly taller and slightly wider but packs a lot more screen thanks to the slimmer side bezels and extremely reduced top and bottom bezels.

The 11-inch iPad Pro is ever so slightly heavier than the 9.7-inch iPad Pro at 1.03 pounds compared to 0.97 pounds, but that’s not something I would have guessed before referencing the spec sheets. There’s a bit of an illusion at play here where the larger iPad actually feels impossibly lighter and sort of hollow because of the larger screen while the older iPad feels more dense and evenly distributed. 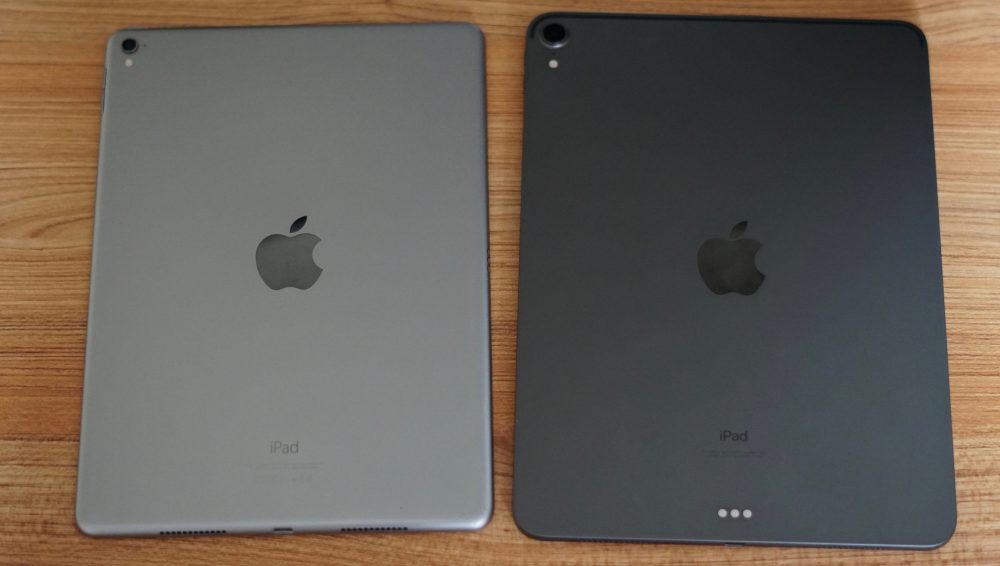 That benefit is lost when you wrap a keyboard cover or case around it, but I often use my iPad on its own as well. It’s also sort of amazing that both of these iPad Pros are “space gray”, but Apple’s vast universe of space gray shades is nothing new.

The 9.7-inch iPad Pro introduced True Tone for adjusting the color temperature of the display based on ambient lighting. The 10.5-inch iPad Pro debuted with ProMotion which doubled the maximum frame rate from 60Hz to 120Hz. The 11-inch iPad Pro chops off the forehead and chin bezels and rounds the corners with the new Liquid Retina display.

Upgrading from the 9.7-inch iPad Pro to the 11-inch iPad Pro means True Tone is nothing new but ProMotion is very new and very noticeable. The new iPad Pro is obviously faster, but doubling the refresh rate makes basic things like scrolling content or swiping between Home screens feel faster. 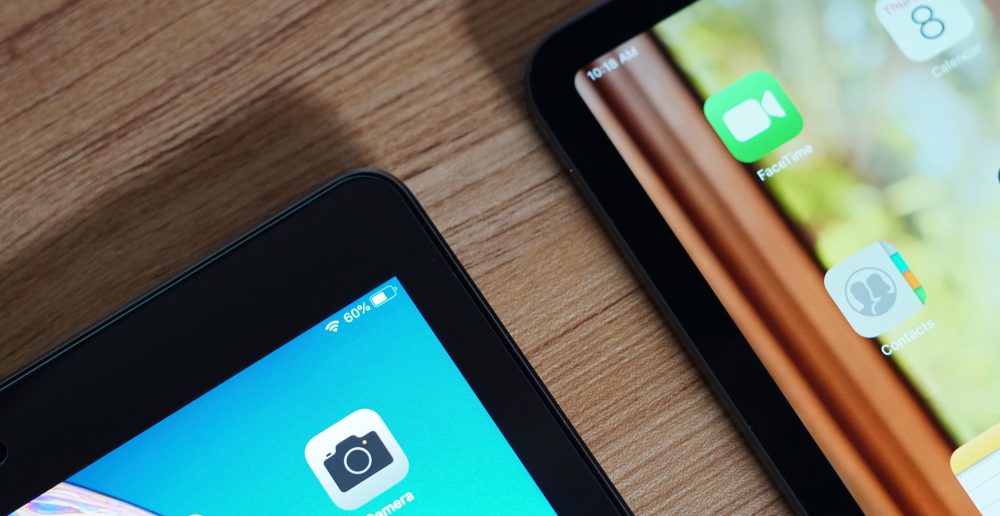 The new rounded corners and dramatically reduced bezels are also excellent. iPad Pro feels like it’s from the same era as the iPhone X and Apple Watch Series 4 with slim bezels and rounded corners.

Of course a change in the display size and shape means apps will need to update to be optimized. If the app was already updated for the 10.5-inch iPad Pro and 12.9-inch iPad Pro, the effect on the 11-inch iPad Pro isn’t a major eyesore. Slim black bars above and below the app where the status bar and new Home indicator exist. You’re not losing much content. 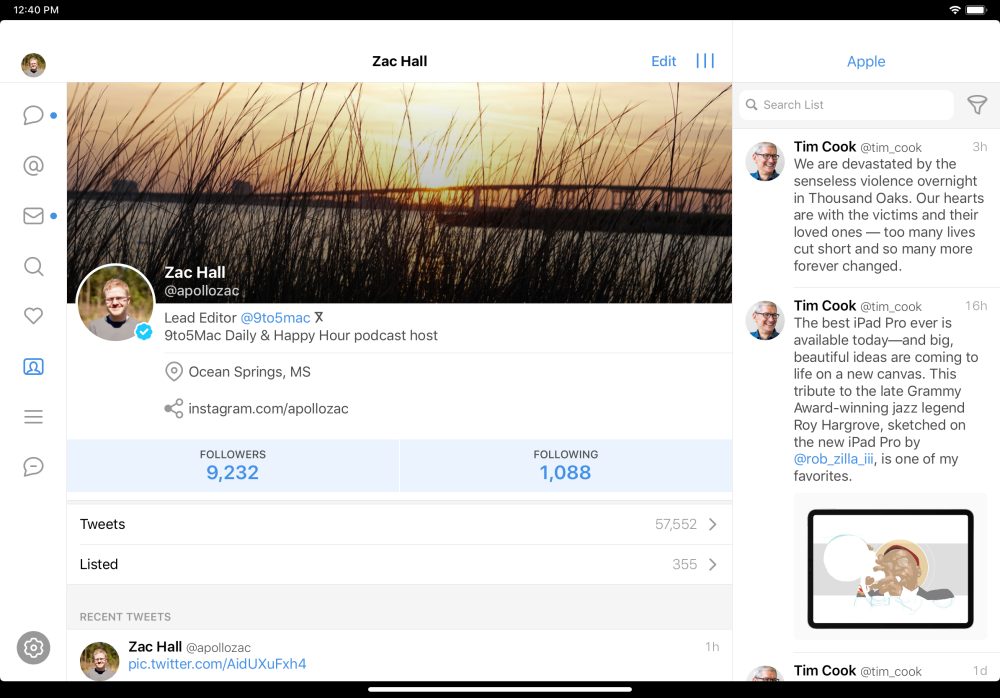 If the app hasn’t been updated for the 12.9-inch iPad Pro from 2015, the letterboxing is pretty rough. Cough, Facebook, ahem. 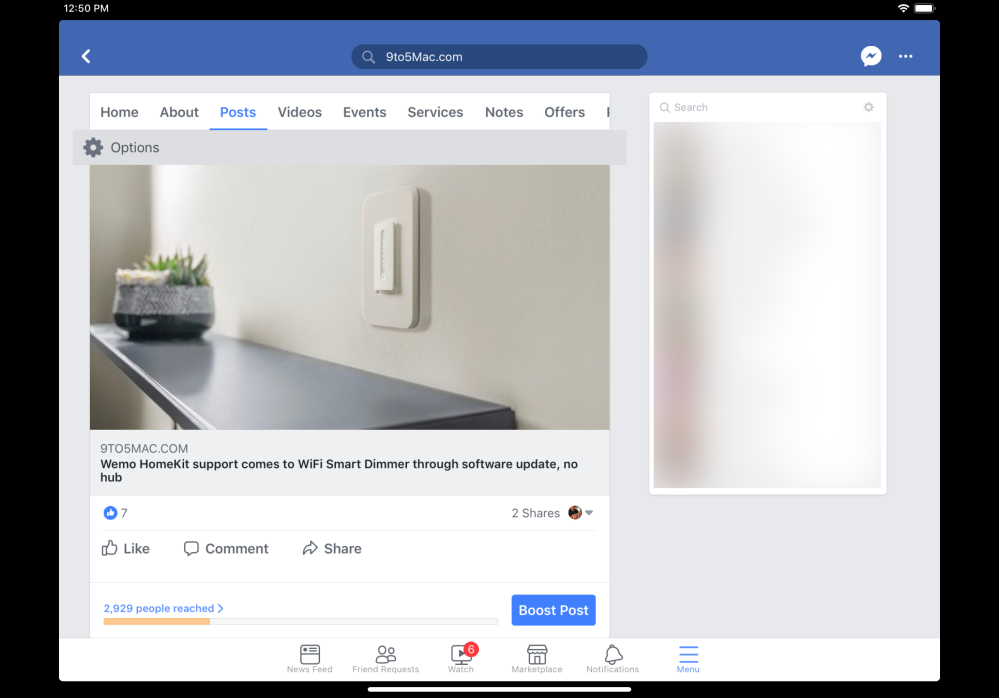 And then there’s my favorite app to plead with for an iPad version, Instagram, which is actually slightly less miserable on the 11-inch iPad Pro compared to the 9.7-inch iPad Pro thanks to the increased height and reduced forehead and chin bezels:

Maybe I should mail my old iPad Pro to Instagram in case they just don’t have one and that’s why there’s no app? (Sorry, if you think the web app is fine then why have an App Store at all?)

The new Apple Pencil is a fantastic improvement over the original version. The $30 premium and incompatibility between iPad Pro generations is unfortunate, but the ergonomic improvements are solid responses to the initial release in 2015.

The matte finish is subtle but definitely less slippery than the glossy finish on the original. I’m still a bit uncomfortable with how easily the Apple Pencil slides across the iPad Pro glass display. I much prefer the friction of paper when sketching, but the convenience of tools on the iPad Pro make it worth accepting.

Now you just snap the Pencil to the side of the iPad Pro. This solves the ‘Is it charged when you need it?’ problem while also addressing storage. I’ve only had my new iPad Pro for about 20 hours at this point, but I expect this new arrangement will translate to me actually using my Apple Pencil a lot more for sketching and maybe even annotating.

One early concern, however, is that the magnetic charging and attachment side is on the right of the iPad Pro when holding it with Face ID at the top center. If I were right-handed, this would be ideal as Apple Pencil would always be there to grab and start writing with as needed.

As a left-handed person, I find that I hold the iPad in my right hand and navigate with my left hand. It’s slightly less natural to reach across the iPad for the Pencil when annotating something quickly. Technically you can use the iPad Pro in any orientation including upside down. I tried this method and much preferred the Apple Pencil on the left side, but then the volume and power buttons are moved and FaceTime calls have a nostril vantage point. I think I’ll just learn to reach across the iPad.

The good news is the Apple Pencil is magnetic, and that means it will stick to a lot of surfaces. Like the fridge, my glasses, my TV, the side of the iPhone 4, and my favorite: my desk: 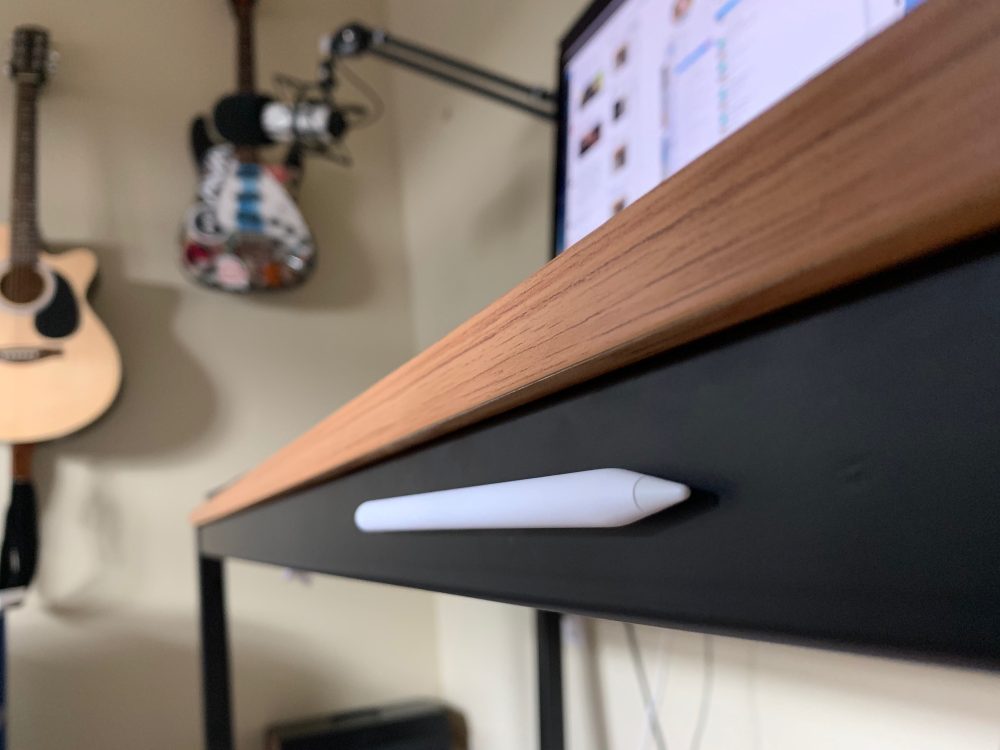 The new double tap gesture to switch between tools is something to evaluate over time. I think I’ll have to train myself to use it before it’s a clear win over tapping on-screen tools, but it definitely addresses the criticism that the original Apple Pencil had no eraser functionality.

Apple introduced the Smart Keyboard in 2015 with the 12.9-inch iPad Pro. It uses Apple’s Smart Connector on the iPad Pro to function. No pairing with Bluetooth or power management required. It serves as a screen cover when not in use and as a stand during use. Apple later made versions for the 9.7-inch iPad Pro and 10.5-inch iPad Pro as they were introduced, but the accessory only changed in size and not function. 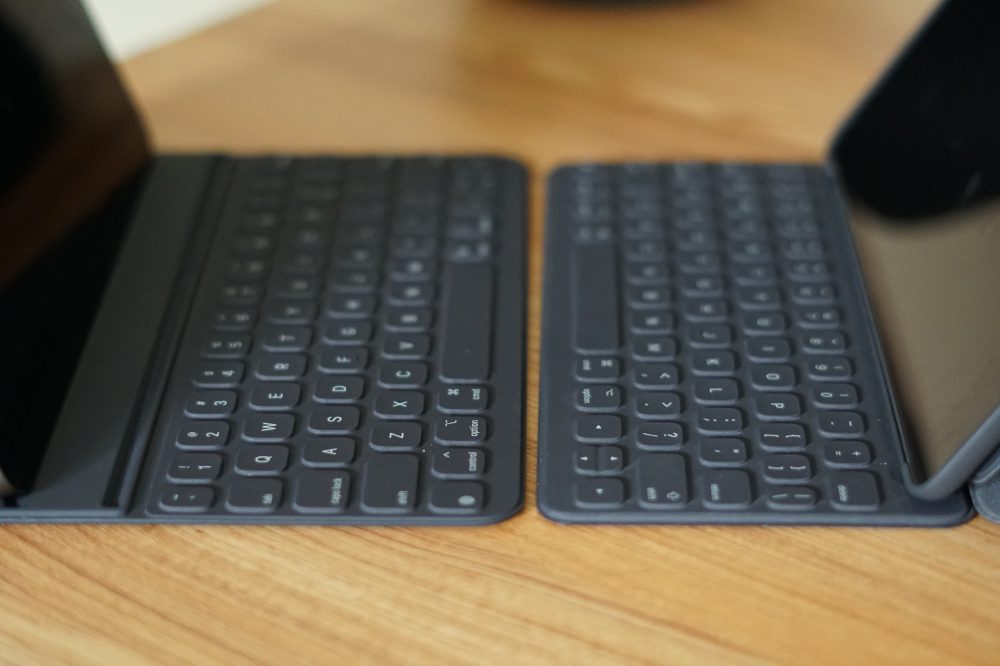 Smart Keyboard Folio is the first new design. It now offers back coverage where it attaches magnetically, and the Smart Connector has moved from the iPad Pro edge to the center back. The typing experience is the same, but I really like the design changes this year.

Smart Keyboard Folio is easier to use as a stand with less origami mastering required. The cover just opens up to reveal the sturdy keyboard without needing to be folded around to form the triangular stand. It also offers two clear angles for propping up the iPad Pro. The original version could be folded back with the keyboard out-of-the-way for a second angle, but it wasn’t as obvious.

Smart Keyboard Folio also feels sturdier in the lap thanks to the new design. The original version felt intended to be used on a desk or a tray and would accidentally activate the space bar key when bent inward during lap usage. 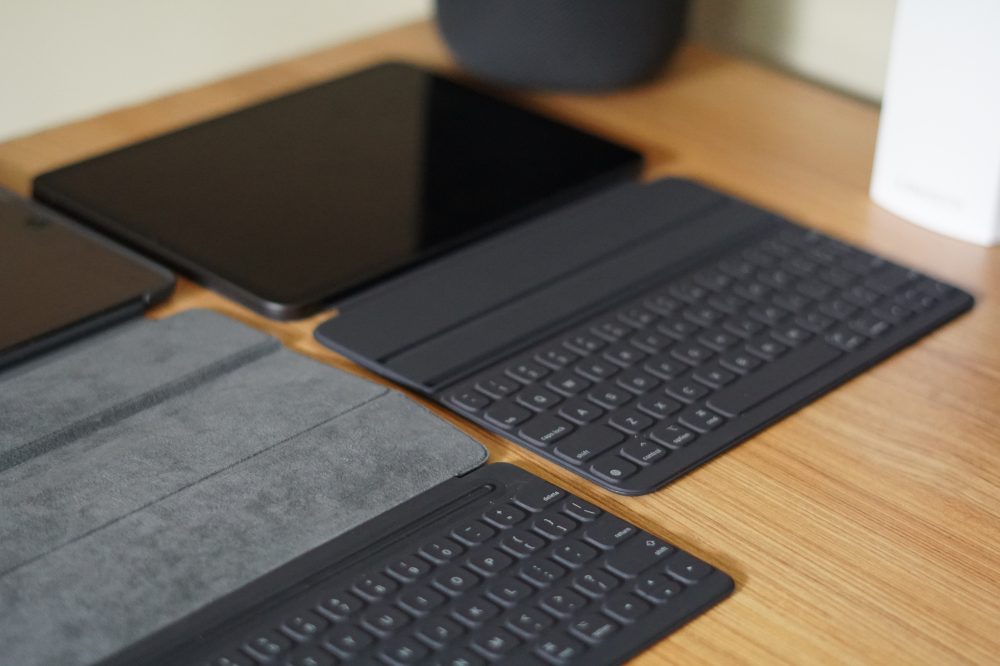 You do lose the option to either leave the back of the iPad Pro exposed or have more back and side protection than Smart Keyboard Folio offers, and the keyboard faces out when the cover is flipped back which feels weird. 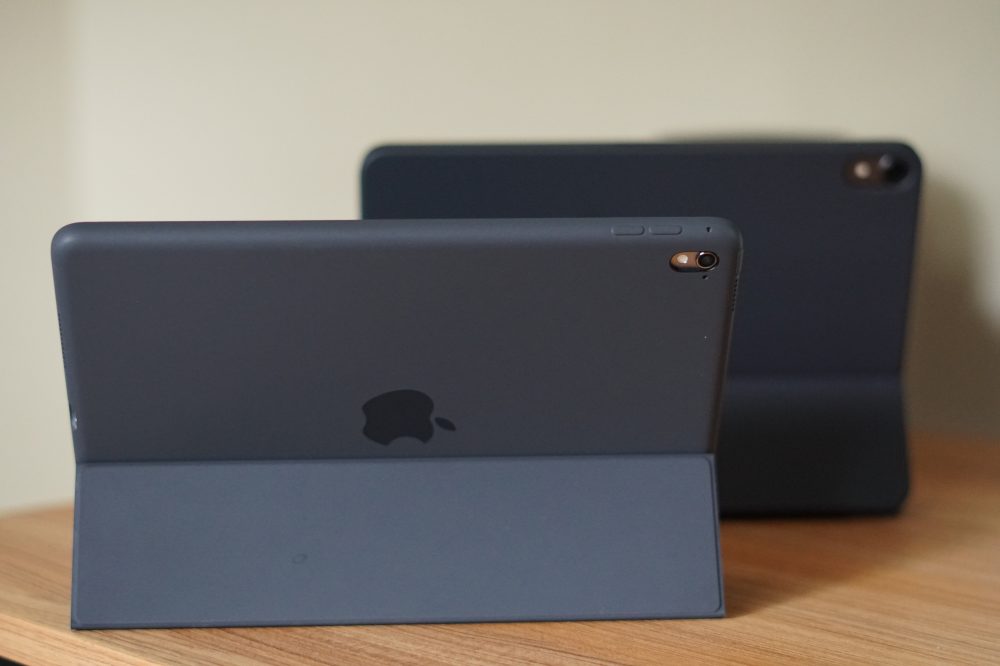 On the other hand, there’s no sideways Apple logo visible when using the iPad Pro in landscape mode while typing, and the cover is flat instead of layered like on the original version — even if that makes it remarkably plain. Just like with the previous Smart Keyboard, however, Smart Keyboard Folio makes you very aware of what surface you use iPad Pro on as it can get dirty and transfer to the iPad display.

Finally, there’s the switch from Lighting to USB-C. I don’t find myself sticking much into my iPad (yet), but the charger change is interesting. iPad Pro is bundled with a new 18W USB-C charger with a very thin USB-C charging cable. Apple’s Lightning to USB-C cable is noticeably more rigid and thicker. There’s no issue here, but the thinner one feels weirdly cheap if you’re used to the thicker USB-C cable. 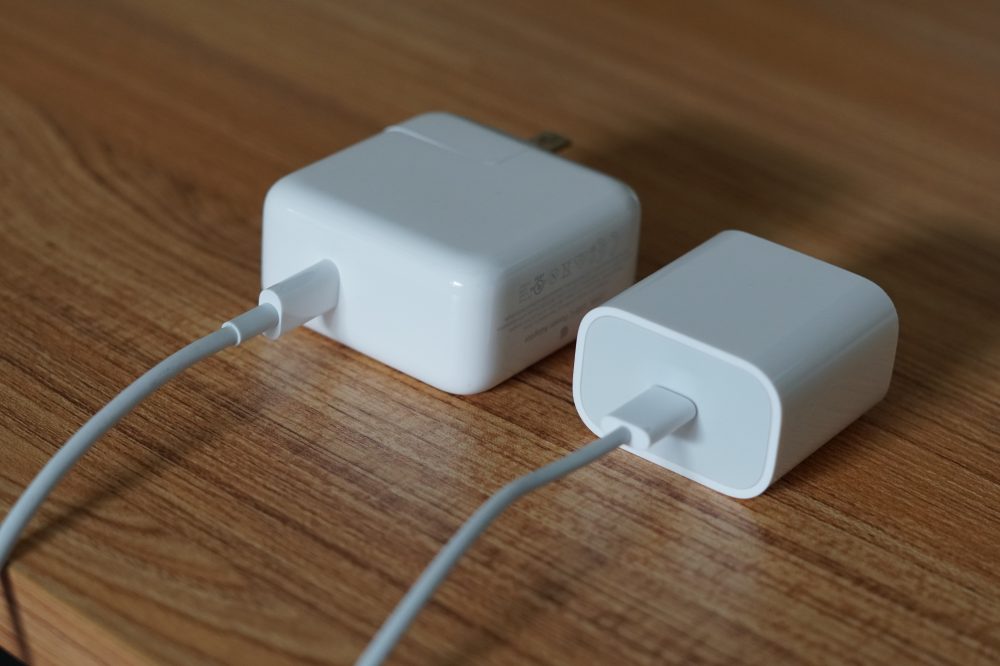 The 18W charging brick is also interesting. Like Apple’s 5W brick, it’s a single unit with no retracting connector and no swappable connector. You also can’t buy a replacement yet, but that will likely change sooner than later. I already had Apple’s 29W USB-C brick for fast charging my iPhone as it’s the lowest wattage USB-C brick that Apple sells so far. It also lets you replace the connector with Apple’s extension cord for having a longer charger without having a long USB-C or Lightning cable. 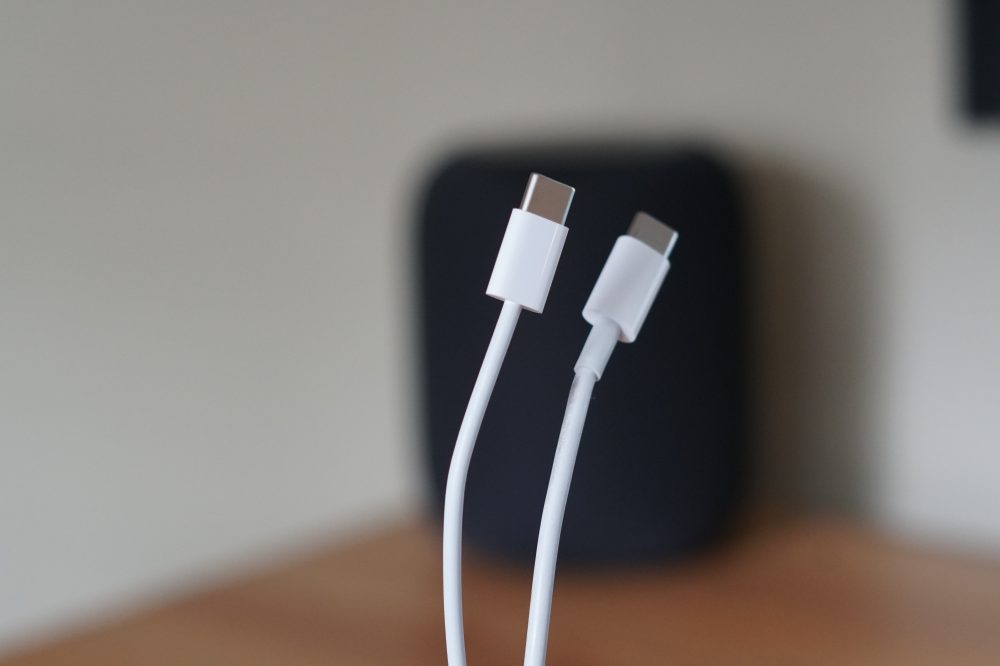 So for now, I’m using the 18W brick for fast charging my iPhone and the 29W brick with the extension cord for charging my iPad Pro. If you’re like me and spent an arm and a leg on the fast charger solution for iPhone and have those extension cords leftover from the days when Macs bundled them, this may be the best arrangement. If not, iPad Pro customers have long recommended Anker’s $26 30W alternative.

With the 9.7-inch iPad Pro, I’ve enjoyed using it for digital drawing and a mix of things like playing podcasts and reading the news or watching video and FaceTime calling. I don’t need it to replace my Mac but instead just fulfill the vision of the original iPad: do a few things better than the iPhone or Mac. For me it does just that — the upgrade from the 9.7-inch iPad Pro to the 11-inch iPad Pro with the updated accessories will do the same things for me but with less friction.

For more on iPad Pro coverage, check out these stories and stay tuned for much more including our video review: