In a city known for style, Apple has made a fashionable contribution. Today in Paris, Apple Champs-Élysées opened as Europe’s most elegant Apple retail location and the best place in France to attend a Today at Apple session. 9to5Mac readers visited the new store and provided us with photos of the grand space to share.

Apple Champs-Élysées makes its presence known long before you pass through the front door. The towering historic building occupies an entire Paris street corner and is anchored by a domed turret stretching the entire height of the structure. Apple has worked for years to restore the store with a balance of historic charm and modern amenities.

Since the building remained under the care of one tenant, J.M. Weston, for many years, much of the original exterior architecture and historic detail of the structure was maintained. A photo of the avenue taken in 1929 shows 114 Avenue des Champs-Élysées (in the distance) looking much as it does today. 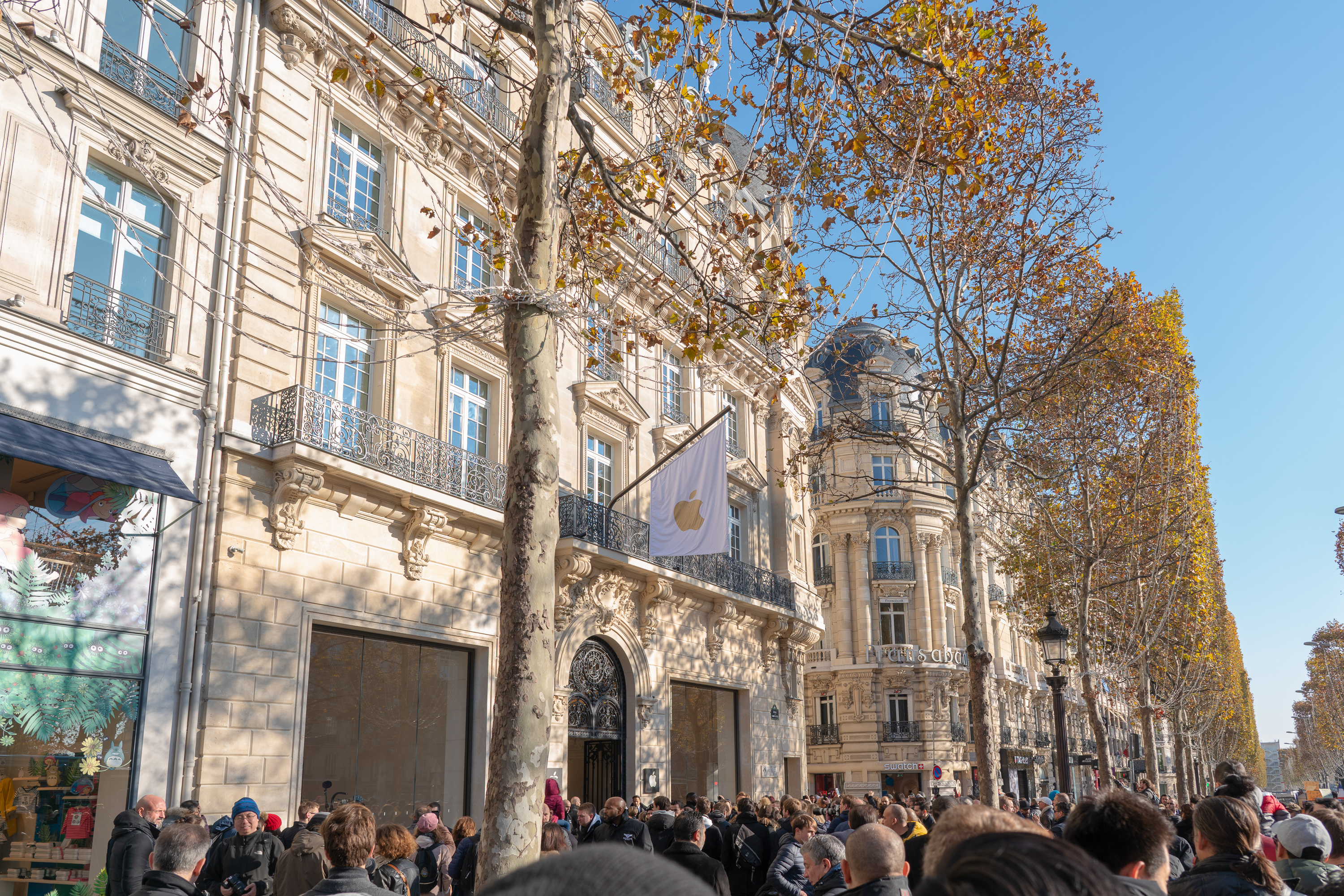 The building was built in 1893 and is located on a architecturally significant stretch known as the Axe historique. It features elements of Beaux-Arts and Second Empire architecture, with heavy pediments and sculptural details capped by a mansard roof. 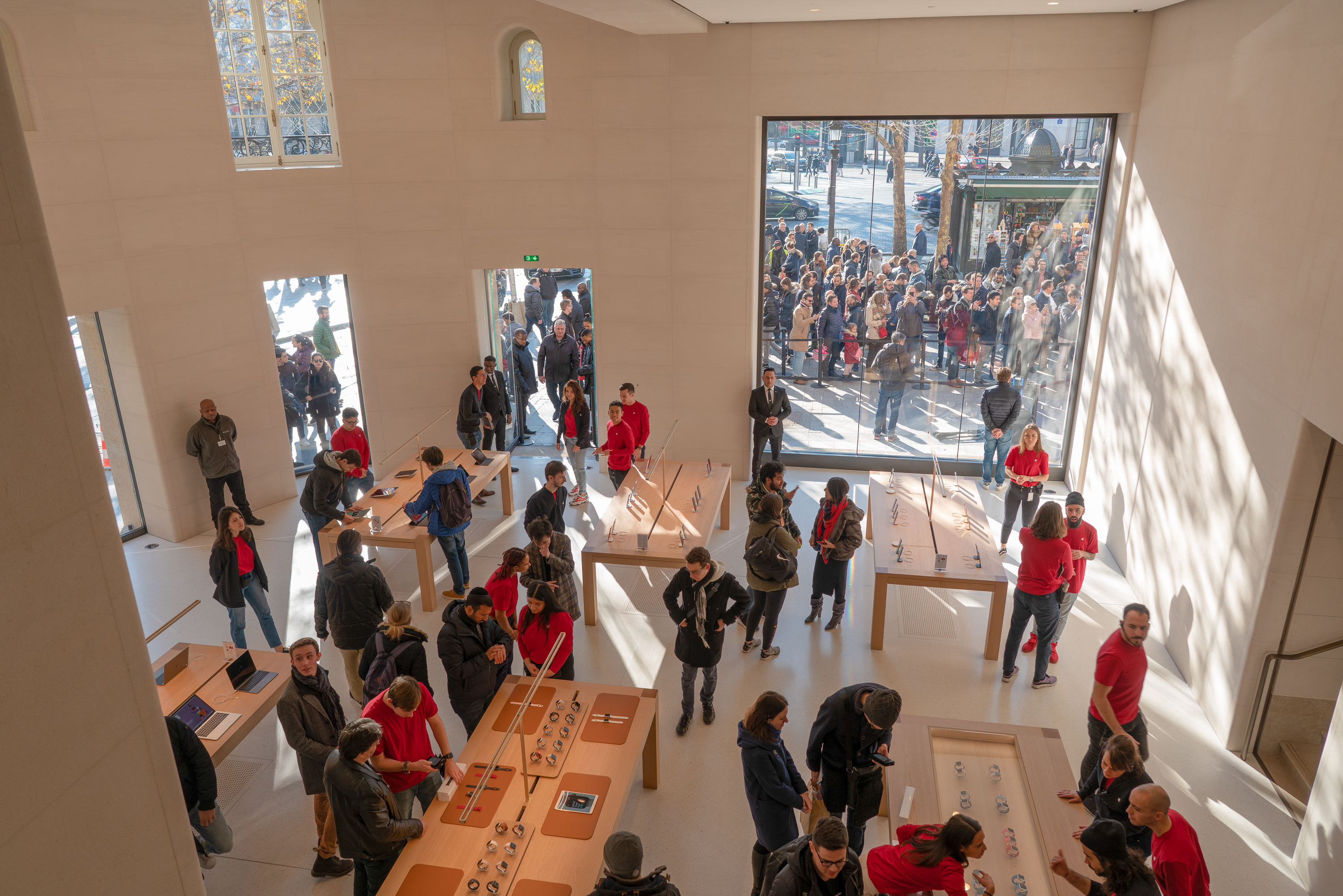 Inside, Apple has transformed the labyrinthine space into a multi-level showroom with intricate rooms and passageways to explore. Wood and marble staircases ascend past delicate leaded glass windows. Smooth stone walls are dotted with Avenue display cases overlooking glass railing-adorned balconies. A bust of the building’s architect still resides over a door frame. An ornate fireplace is juxtaposed with the clean lines of Forum seating. 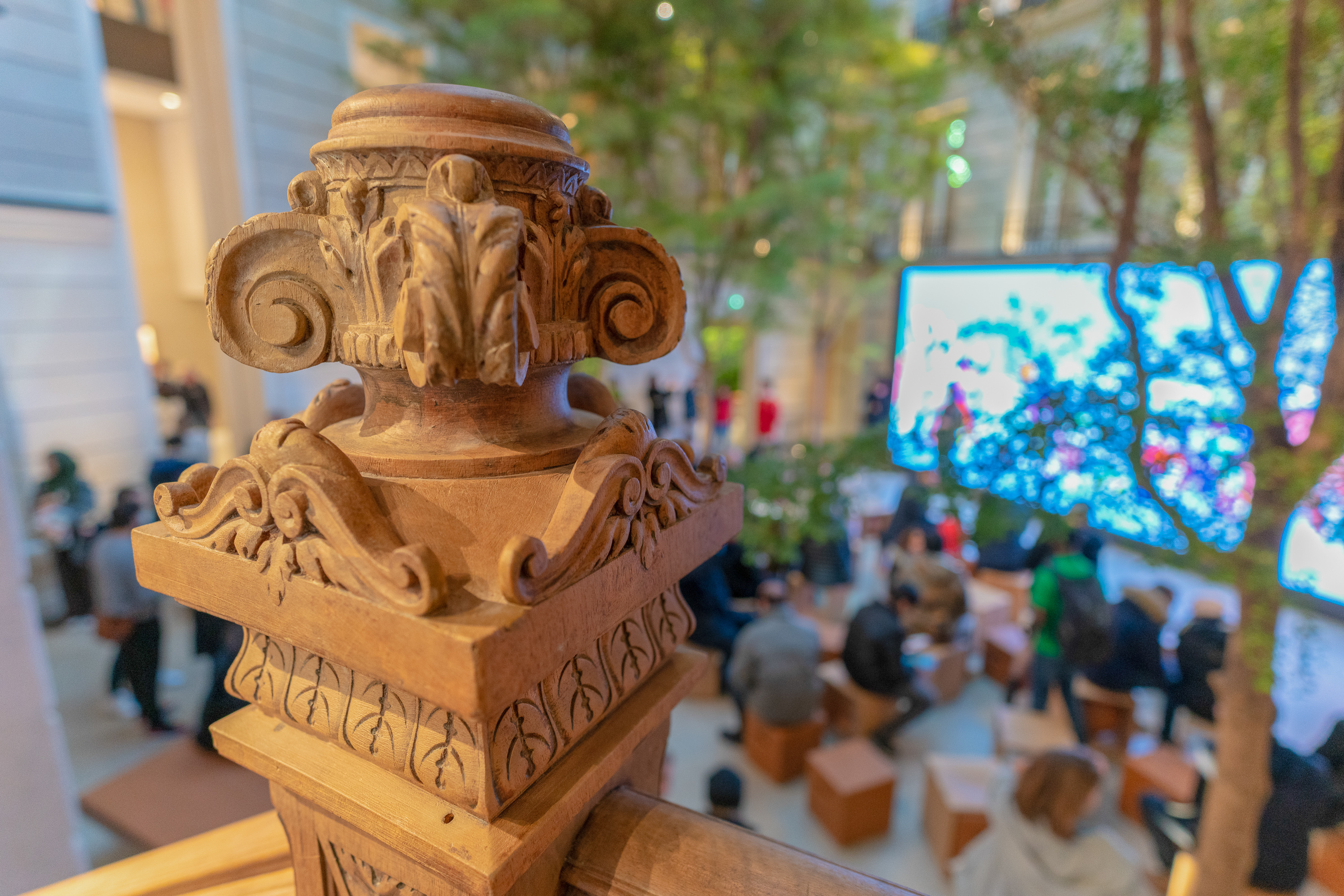 Above the third floor, offices will support Apple’s operations in France. 337 employees representing 15 nationalities and speaking 17 languages will work at the new store. 200 have been brought in from existing locations.

Judging by the significance of the store, it should come as no surprise that Apple worked with architects Foster + Partners to design the space. The duo also collaborated on a historic store in London, Apple Regent Street, among many other flagship locations. 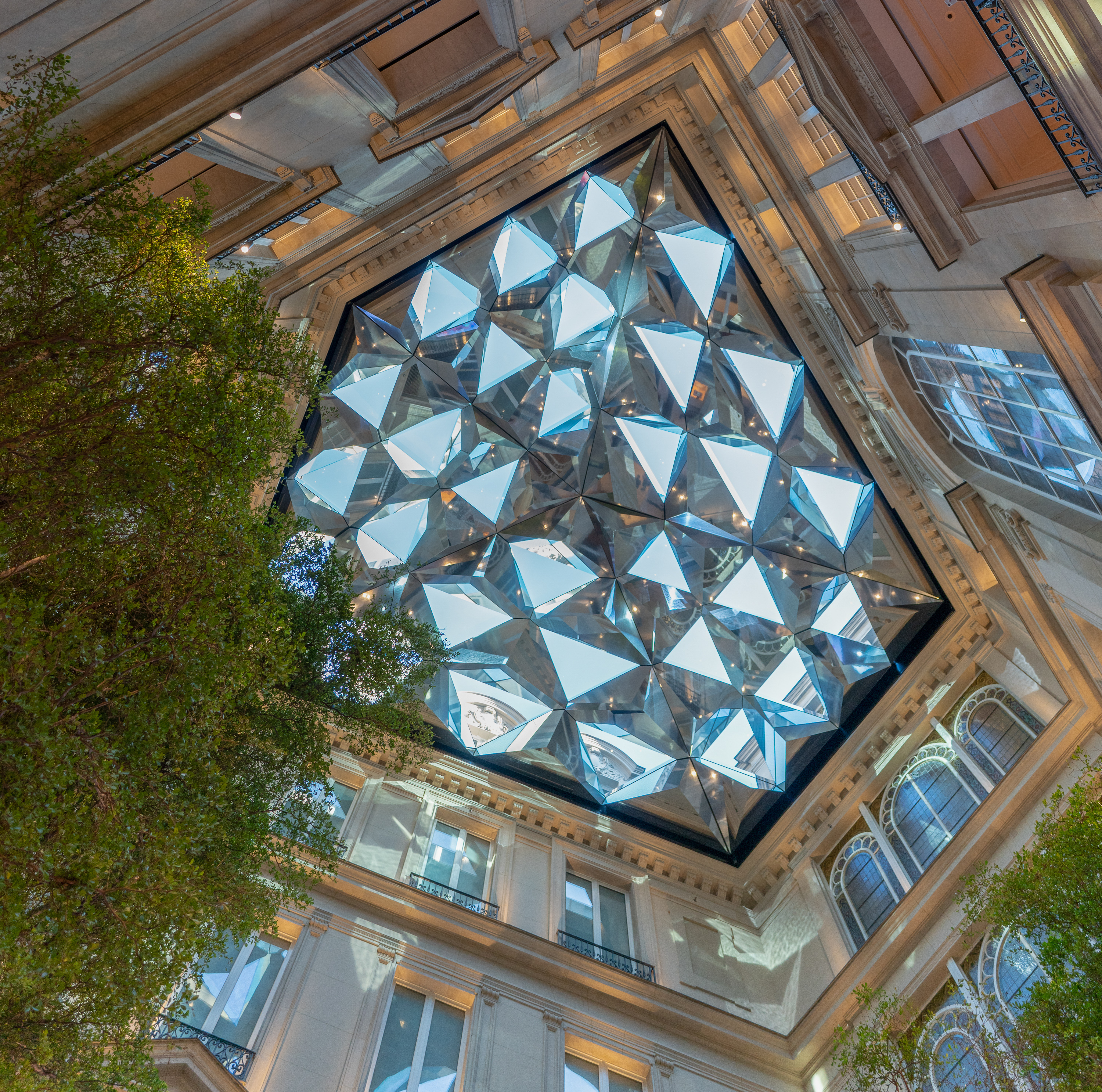 While the building’s retail space is impressive in its own right, the crown jewel of Apple Champs-Élysées is what SVP Angela Ahrendts calls “Europe’s grandest Forum.” At the center of the store, a pentagonal courtyard extends to the sky, almost appearing to be carved out of the building’s core. At a dizzying height, a reflective skylight fills the void created above the Forum, allowing natural light to stream down through angular passages. Photovoltaic panels and a rainwater collection system are integrated to generate renewable energy and provide recycled water for the store. Below, six trees shade an 8K Video Wall. 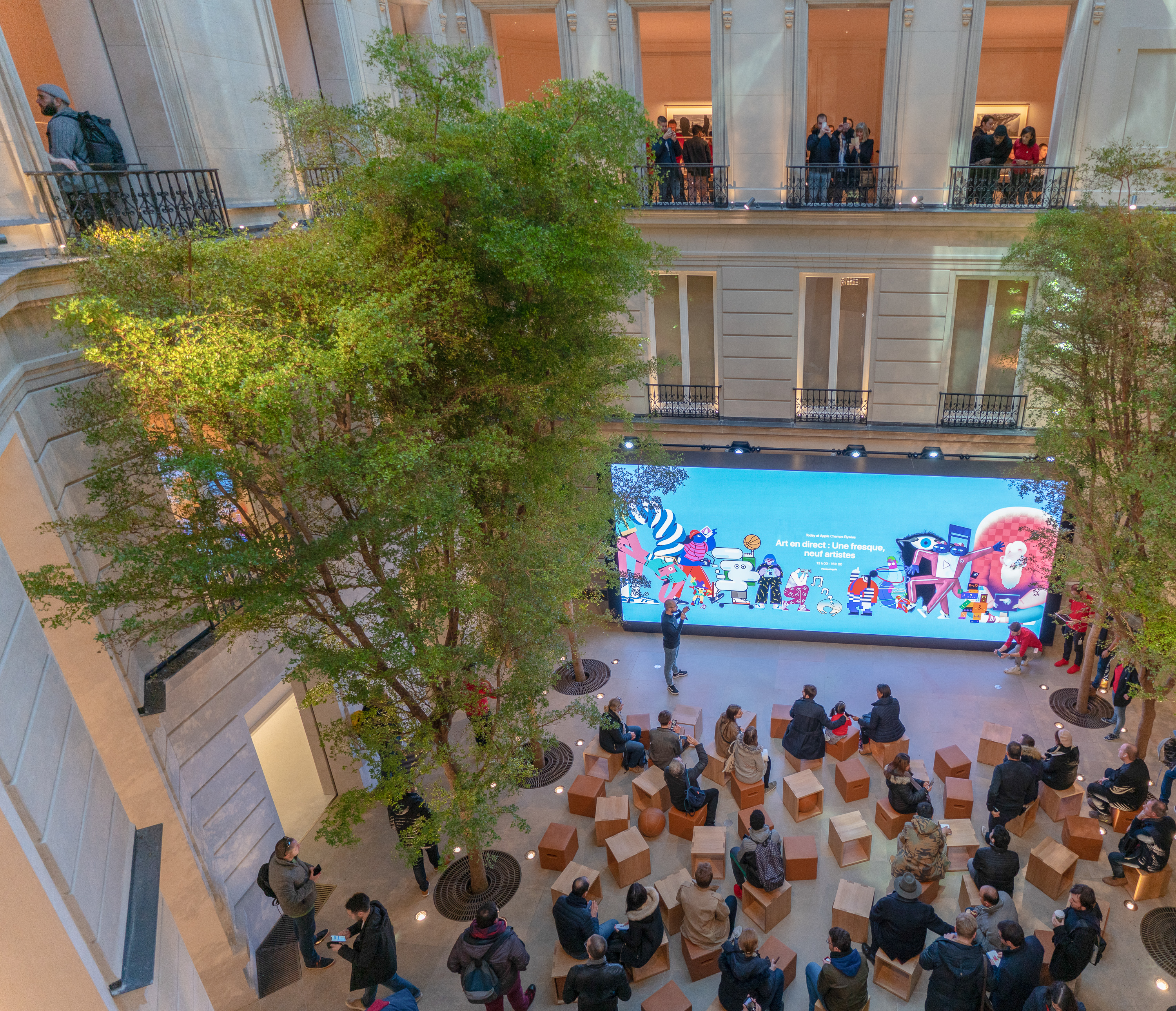 This community space is Apple’s greatest physical expression of Today at Apple to date, a stunning investment reaffirming a belief that the future of retail includes more than online sales.

To celebrate the types of creative sessions and community performances Apple will host in Paris, the following 15 artists were selected to create works promoting the store’s grand opening. Additionally, a special Apple Music playlist has been created for the launch. 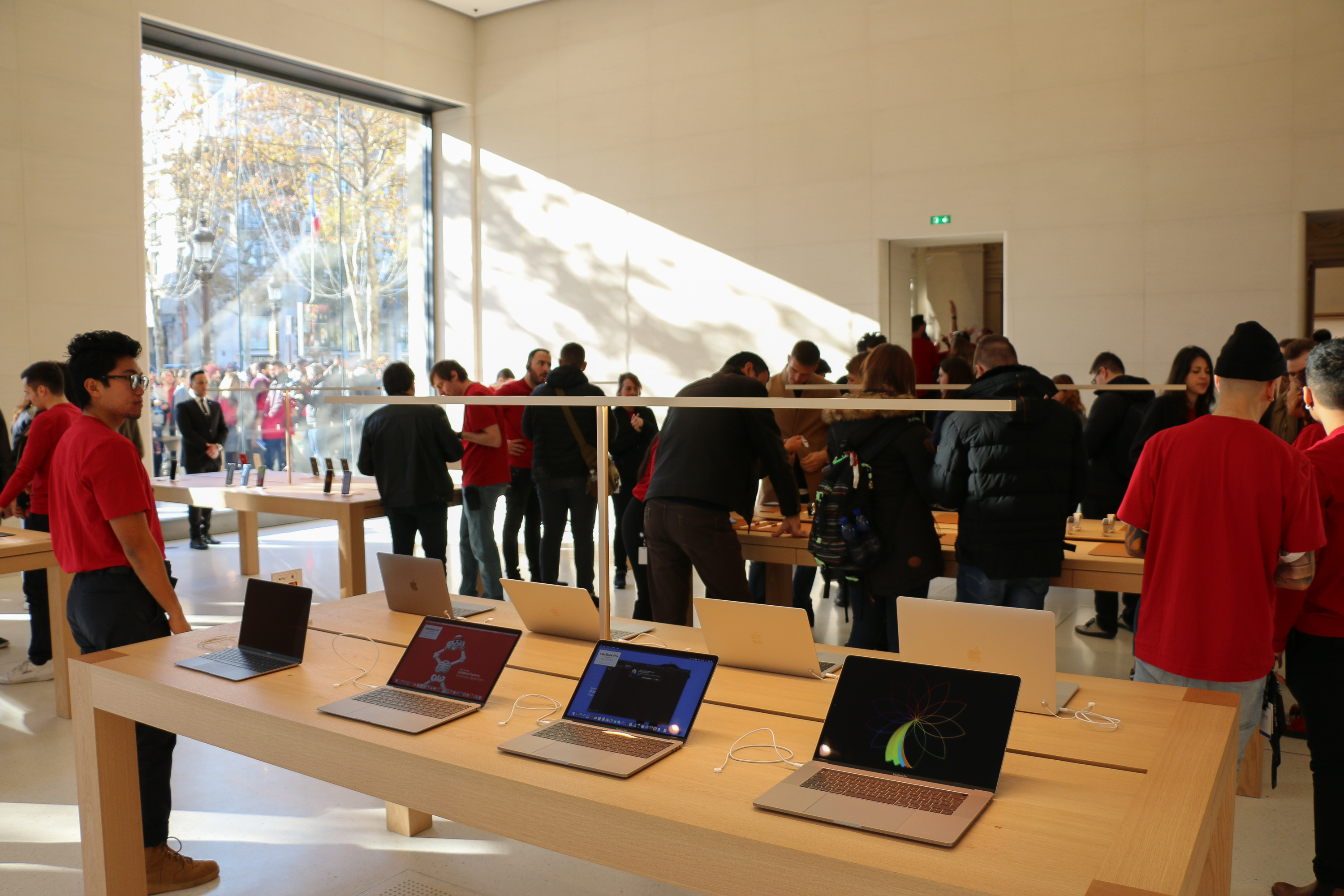 A store of this magnitude offers some unique design details of it own. Seemingly endless hallways lined with parquet flooring lead to tastefully decorated rooms filling the cavernous building with surprises around every bend. Product tables are lit by center mounted LED lamps, found elsewhere only at Apple Grand Central and Apple Cotai Central. Where aviation pioneer Alberto Santos-Dumont once made his home, Apple has replicated a Parisian apartment to create an “Experience Room” for customers to see how Apple’s home products can fit in their lives. HomePods dot the tables throughout the room, and an Apple TV is displayed in front of a living room set complete with a copy of Designed by Apple in California on the coffee table.

Throughout the store, black and white photographs taken in the French cities of Lyon, Marseille, and Paris are displayed. The images were shot by photographer Axel Morin, who Apple teamed up with to create an exhibition in Paris this past July. A similar video campaign was used to promote the iPhone X’s camera system. 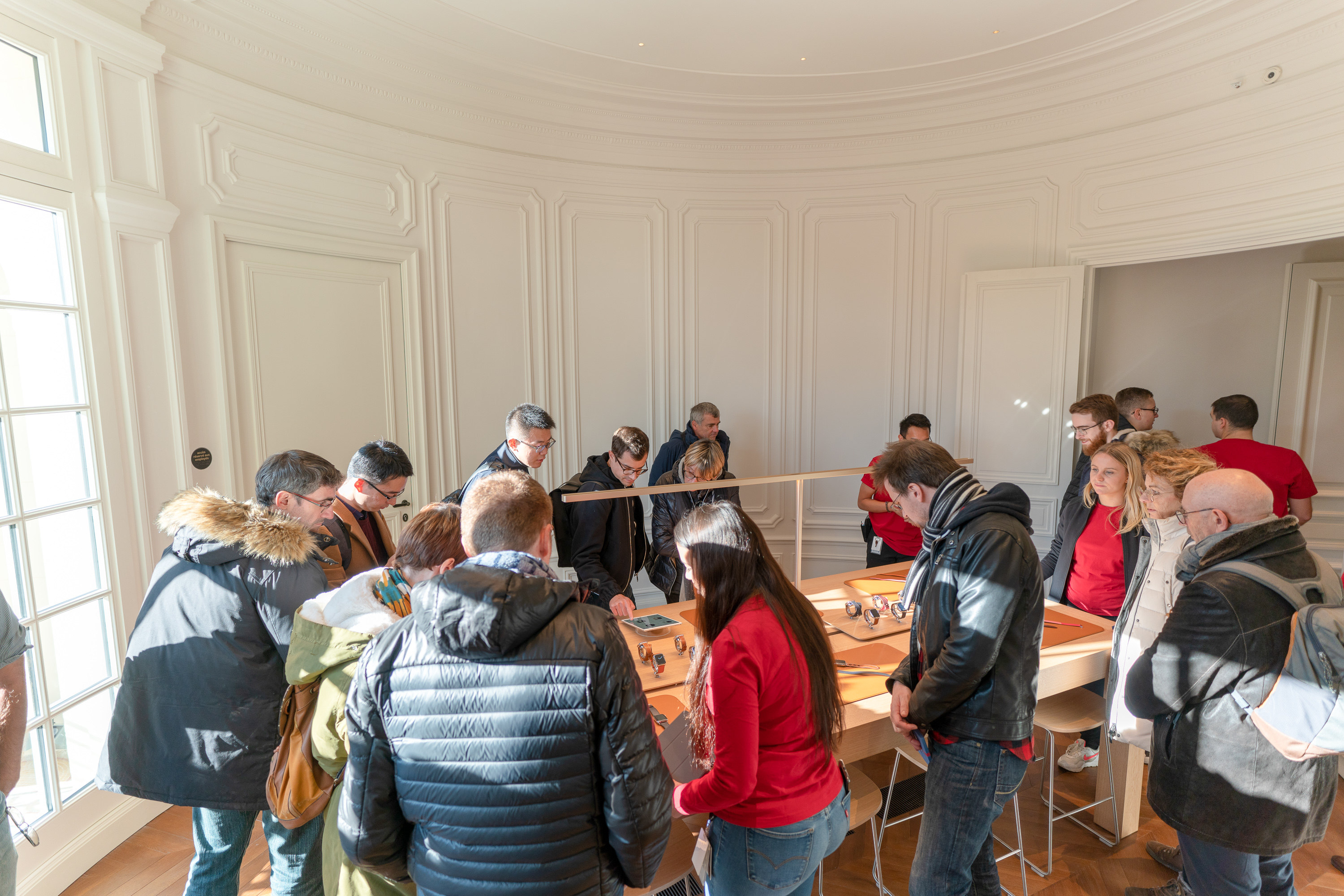 Finally, Apple Champs-Élysées also includes a full room dedicated to Apple Watch Hermès bands, a first for any store. Brand new wooden collection stands (pictured above and in the lead photo) are used to display demo watches. Replacing previous plastic versions, this design was first piloted at Apple Park Visitor Center and is now rolling out to some stores around the world including yesterday’s reopening of Apple Third Street Promenade.

The space allows the full Hermès line to be displayed with each band in context with other color themes and styles.  Most stores display only a few popular options, with others available to view upon request. Since Hermès is headquartered in Paris, the dedicated try-on room is a fitting addition for Apple’s most luxurious French store. 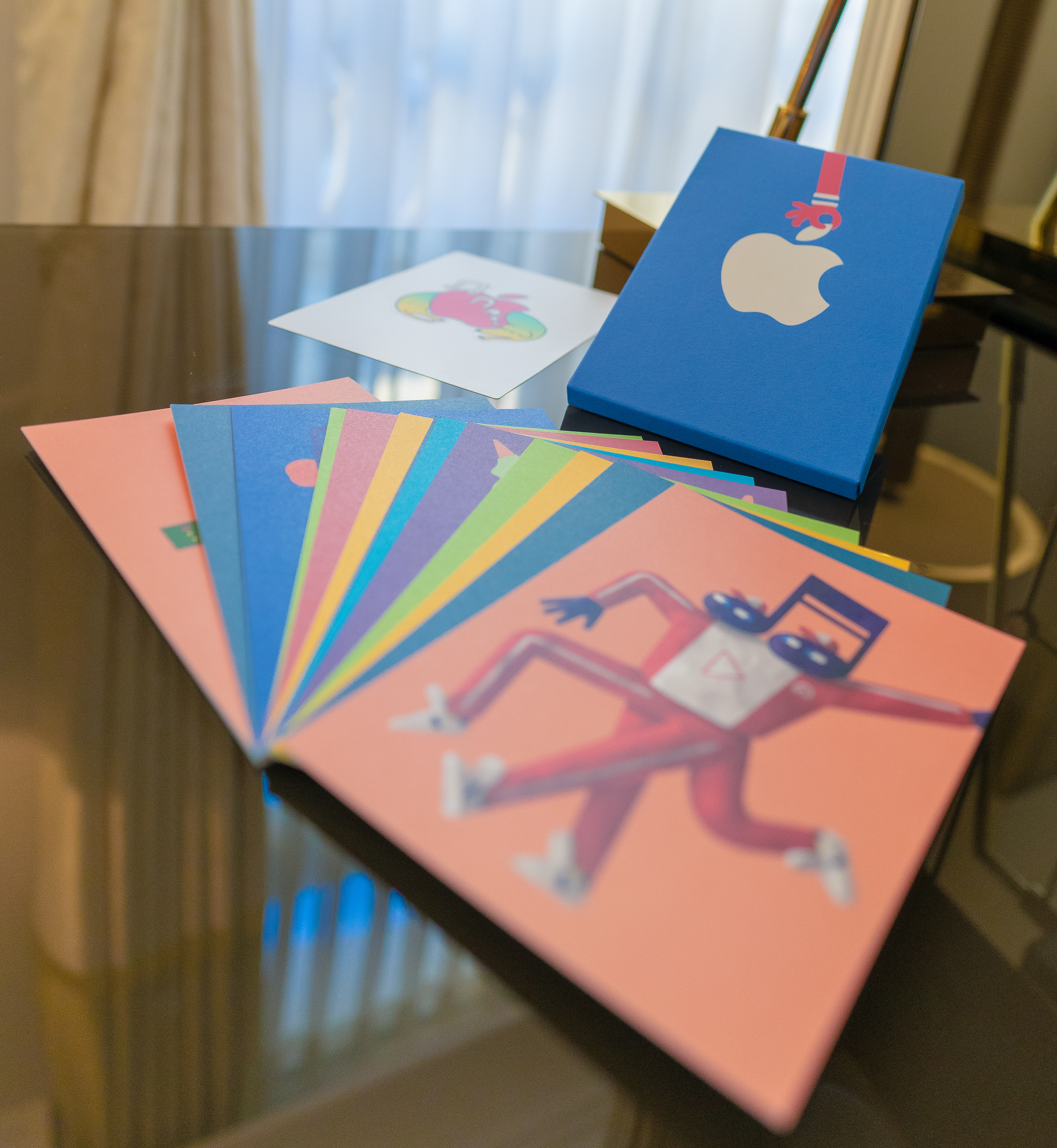 Foster + Partners Head of Studio Stefan Behling called Apple’s new Paris store “one of the most unique Apple Flagships in the world.” From photos, it’s easy to see why. By combining history, modernity, fashion, and design, Apple Champs-Élysées fully embodies the blending of technology with liberal arts and Apple’s creativity-centered retail strategy.

Other recent store openings and remodels: