Pixelmator Pro has already won Apple’s App of the Year award in the Mac App Store but its constant update schedule never ceases. Today, Pixelmator Pro adds a redesigned Color Balance tool to tint shadows, midtones and highlights. The UI exposes three color wheels, with brightness and saturation sliders flanking each side of the orb. Simply slide to adjust the cast and mood of an image.

Pixelmator Pro 1.2.4 also includes some new resizing modes, like the Lanczos algorithm for higher-quality downsampling and Nearest Neighbor for pixel artwork. As always, these new features are offered as a free update available in the Mac App Store.

The Pixelmator team says the new design for the Color Balance feature was inspired by video color grading software. It lets you isolate the colors in the shadows, midtones and highlights, and adjust each independently. With just a few little edits, you can change the tone of an image significantly.

Here’s one of my favorite shots; the color adjusted version is on the right. A series of small tweaks results in a significant new take on the scene. I transitioned the image from a muted purpley-green palette to a pop of blue and lush green grass.

The color wheel UI lets you just drag the picker around the wheel, to quickly experiment with subtler and more dramatic changes. Pixelmator Pro is a non-destructive image editor so you can simply remove these adjustments and start over if you really mess up.

Resizing algorithms are a notable addition. Until now, Pixelmator Pro has only supported one type of resizing, which used an interpolation algorithm. This was problematic for icon work or pixel art, as resizing the image would immediately make the image blurry as the resizing algorithm would blend adjacent pixels together. 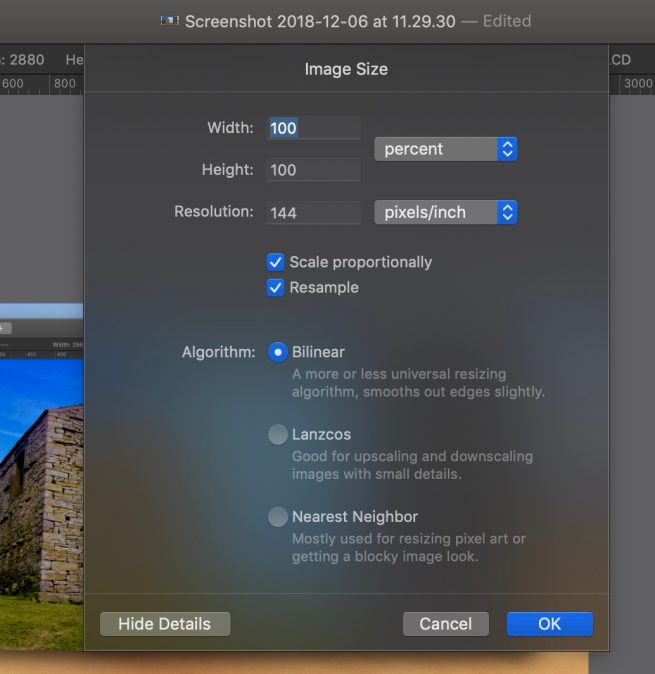 You can now choose the Nearest Neighbor mode, which simply selects a single input pixel for each output pixel and does not use any interpolation. You can now also choose Lanczos interpolation or Bilinear; Lanczos is better at preserving details whilst Bilinear inherently softens edges and is the preferred choice for photographs. These options are hidden behind a Show Details button in the Image Size panel.

Version 1.2.4 also includes enhancements to the Grain effect, two new Automator actions, and a bevy of bug fixes. Get Pixelmator Pro for $40 from the Mac App Store (on sale for $30 until Friday).