Review: iPhone XR Clear Case – is it worth the premium price? [Video] 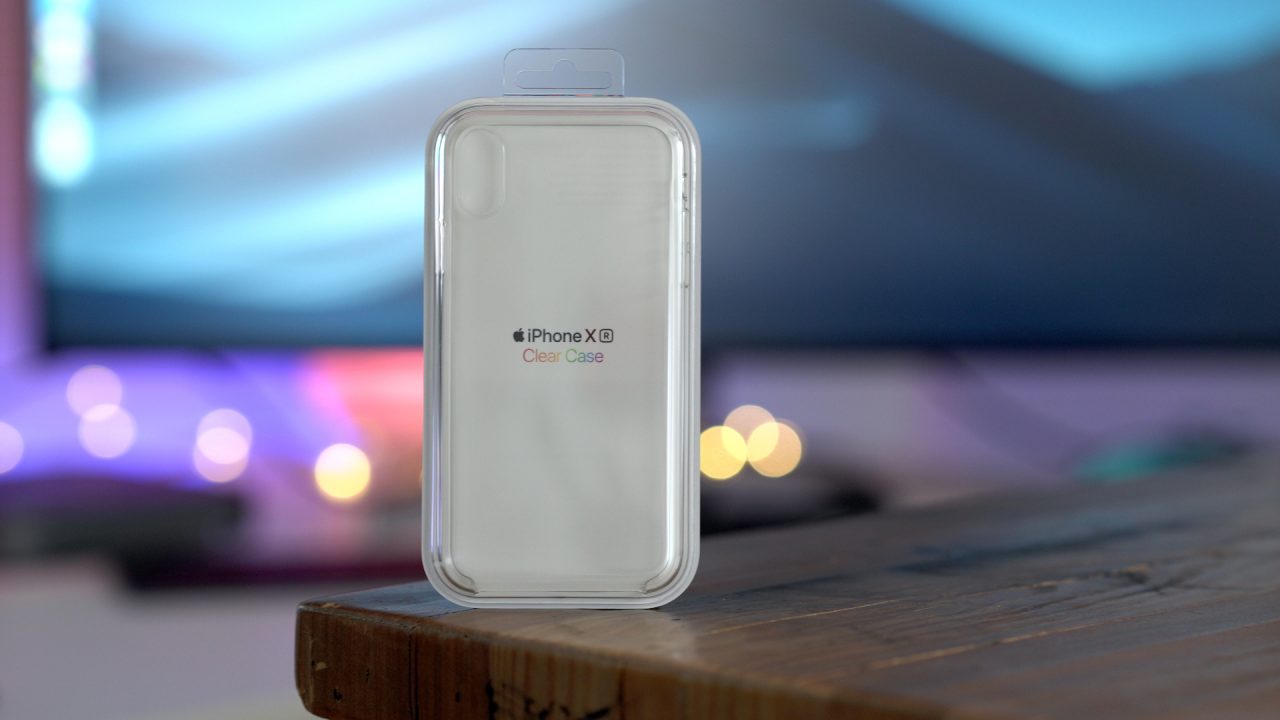 Apple’s long-rumored first-party clear case is now finally available. At $39.99, it’s pricier than many of the third-party iPhone XR clear case options out there. Is the iPhone XR Clear Case worth it? Watch our hands-on video review for the details.

There’s not a whole lot to the iPhone XR Clear Case, but a few things are immediately obvious about this release. For starters, this is the first clear case that Apple has produced since the iPhone debuted back in 2007. Considering the amount of iPhones and cases we’ve seen from Apple during that stretch, it’s a little surprising to me that this is its first clear case attempt.

Of course, many third-party manufactures have produced clear cases over the years, often to mixed results. One of the most difficult things about producing a clear case is ensuring that it won’t yellow over time. Some case manufacturer’s products perform better than others in this regard, so it will be interesting to see how the iPhone XR Clear Case maintains its clarity over time.

Apple obviously felt very strongly about the iPhone XR color scheme, so much so that it was willing to launch the phone without any first-party case option until the iPhone XR Clear Case was ready to ship. Apple really wants its users to show off those beautiful iPhone XR colors.

The iPhone XR Clear Case comes in a simple clear package with the ‘iPhone XR’ text and a rainbow-colored ‘Clear Case’ text below that. If you’ve ever unboxed one of Apple’s silicone cases, then you’ll know exactly what to expect here; simply peel off the back cover to reveal the product. 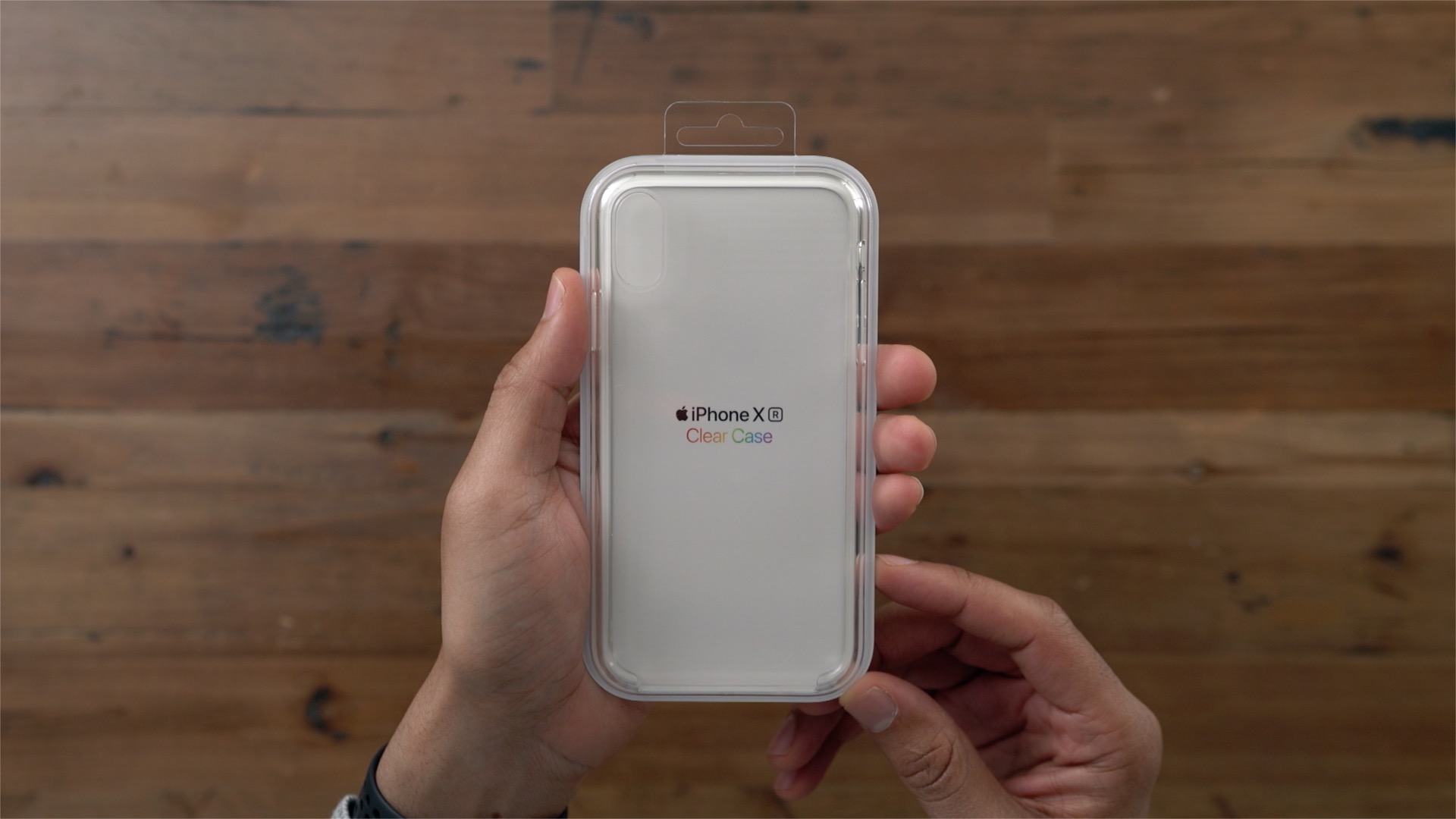 The iPhone XR Clear Case isn’t a soft and pliable case like some clear cases are; instead, Apple produced a relatively hard clear case that acts more like a shell to the iPhone XR aluminum side walls and glass rear exterior. Inserting the iPhone XR inside the case is as easy as sliding the top portion of the phone into the case, and snapping the bottom portion inside.

The case provides superior grip when compared to using the iPhone XR without a case, but it’s not as grippy as some of the silicone cases that are hard to slip into pockets and attract a lot of lint. Users will have no problem in those areas with Apple’s iPhone XR Clear Case.

The iPhone XR Clear Case features a substantial lip that curves around the edge of the screen, protecting your iPhone XR’s display even when placed face down on a table. 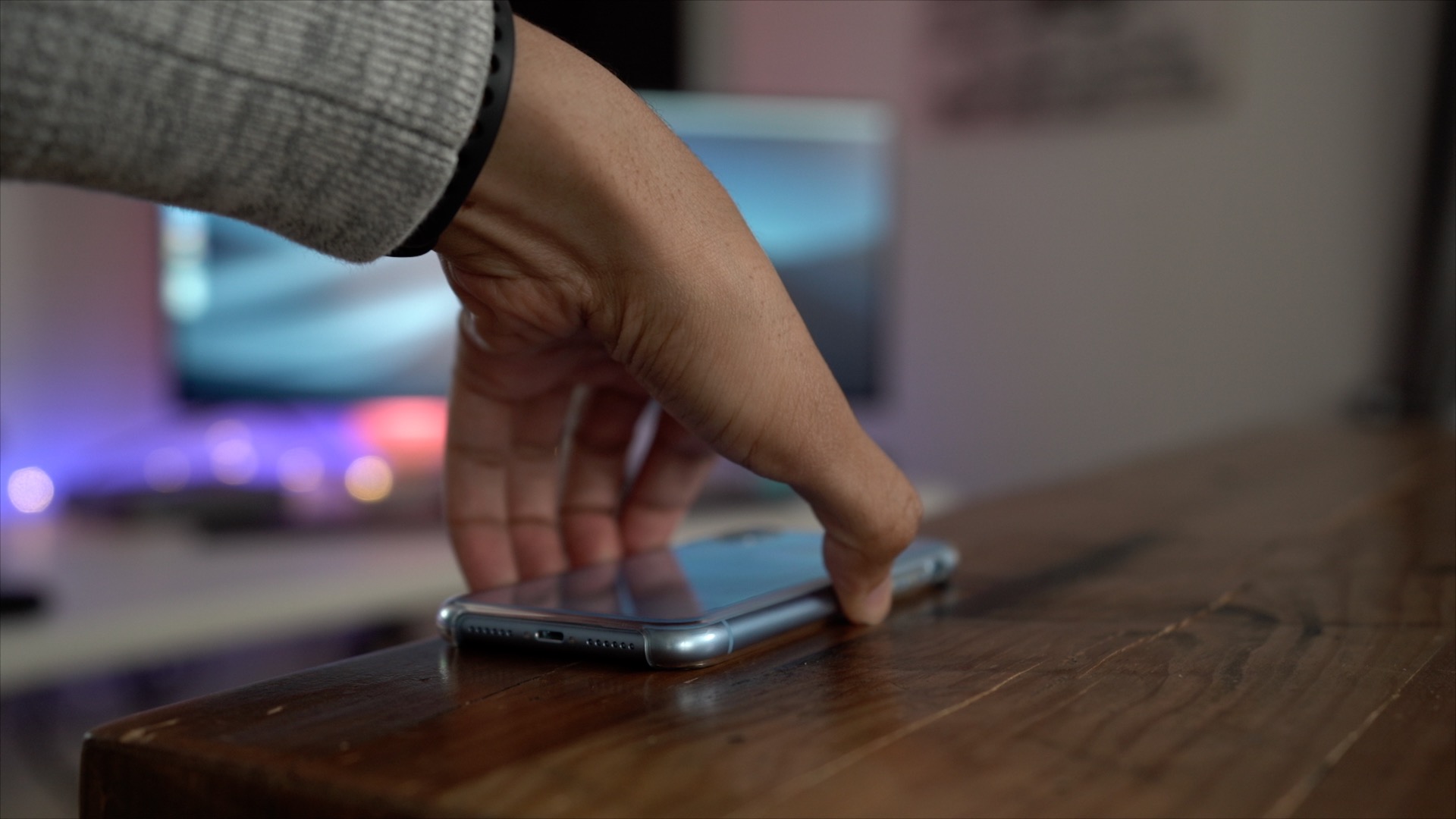 As expected, all of the needed cutouts and buttons are here. There’s a large camera cutout on the rear of the case, and the material is slightly thicker than the camera lip. Not only will such a design protect the camera lens, but it also neutralizes much of the instability stemming from the camera lip when placed face up on a surface. 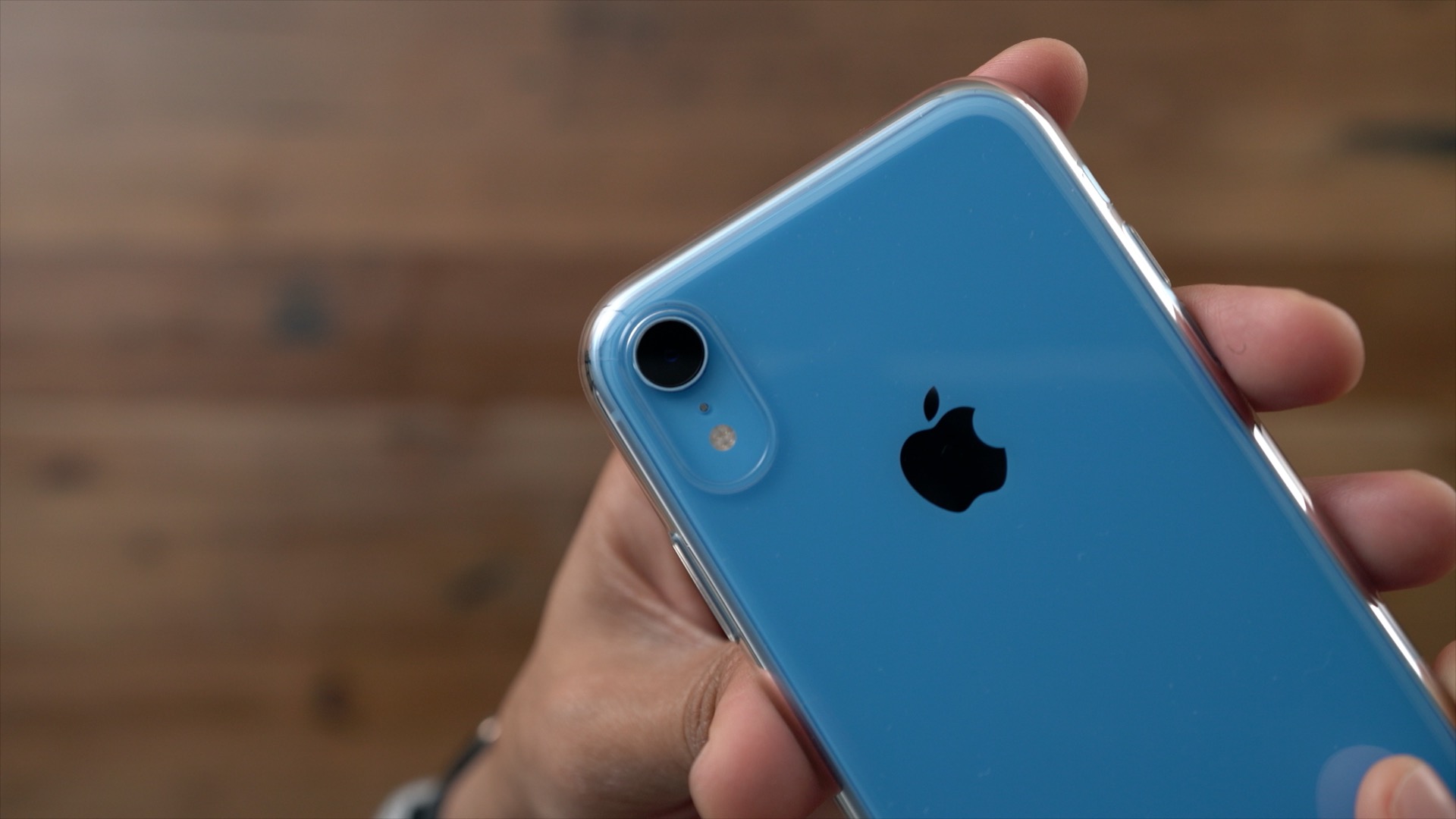 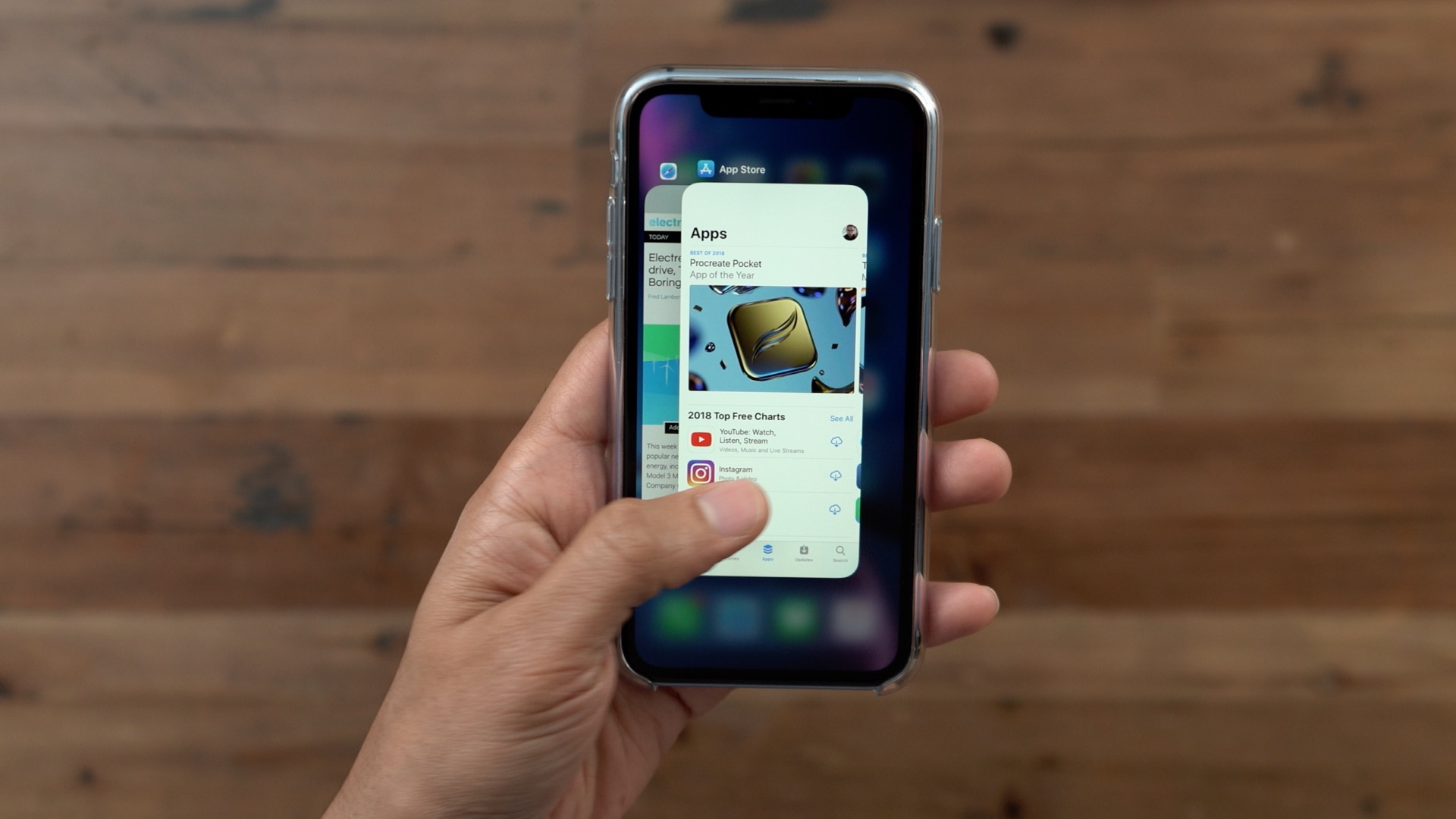 The iPhone XR Clear Case offers solid protection in a package that adds a bit of extra bulk to your phone, but it’s not so bulky that it’s unpleasant to use.

On the sides of the iPhone XR Clear Case, you’ll find buttons for the Side button and Volume buttons. You’ll also find a cutout for the Ring/Silent switch. 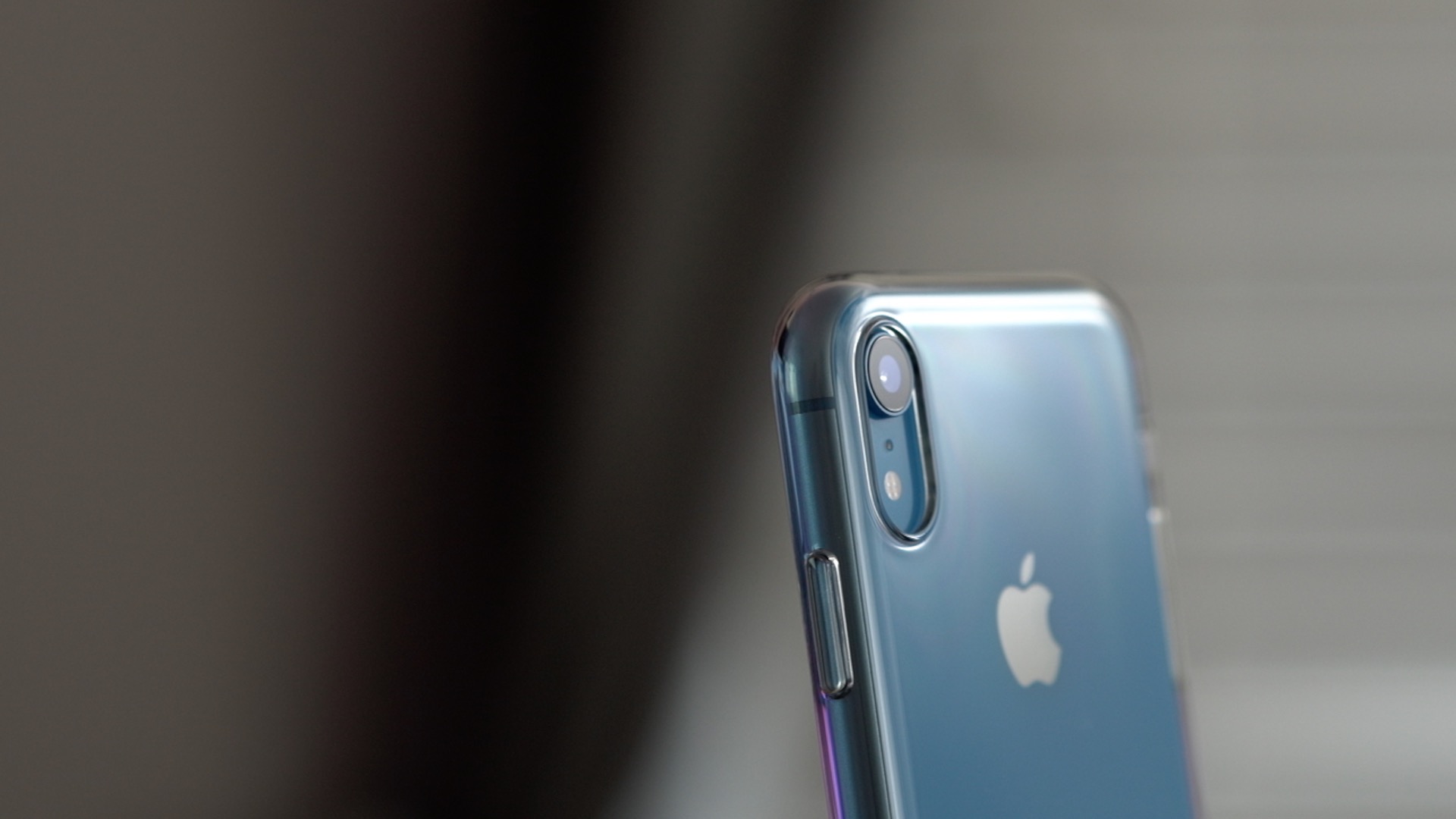 In my opinion, the buttons, particularly the Volume buttons, is where the iPhone XR Clear Case design disappoints somewhat. The buttons lack the sort of tactility that they should have. The buttons work, but pressing them is more of a mushy experience that doesn’t exactly make you confident that the button was pressed successfully. This is surprising, given the attention to detail that Apple has paid to its case buttons in the past. 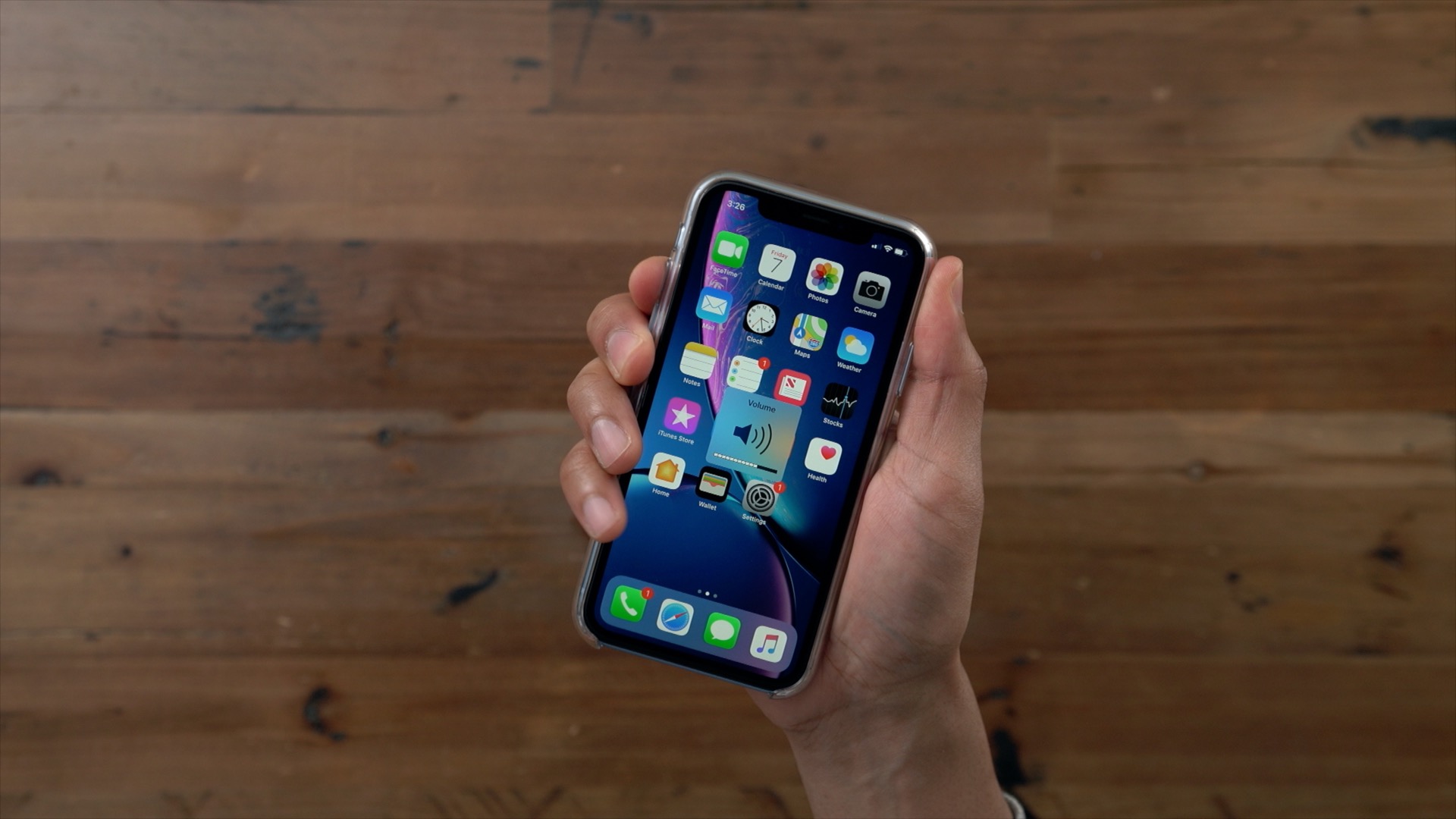 Other areas to consider

I also noticed that the iPhone XR Clear Case falls victim to the “rainbow effect” that affects the type of clear polymer that’s used here. At certain angles, in the right type of light, you’ll see a rainbow pattern on the clear plastic. This is an effect that I’ve seen third-party case makers, such as Spigen, specifically advertise their cases as not having. 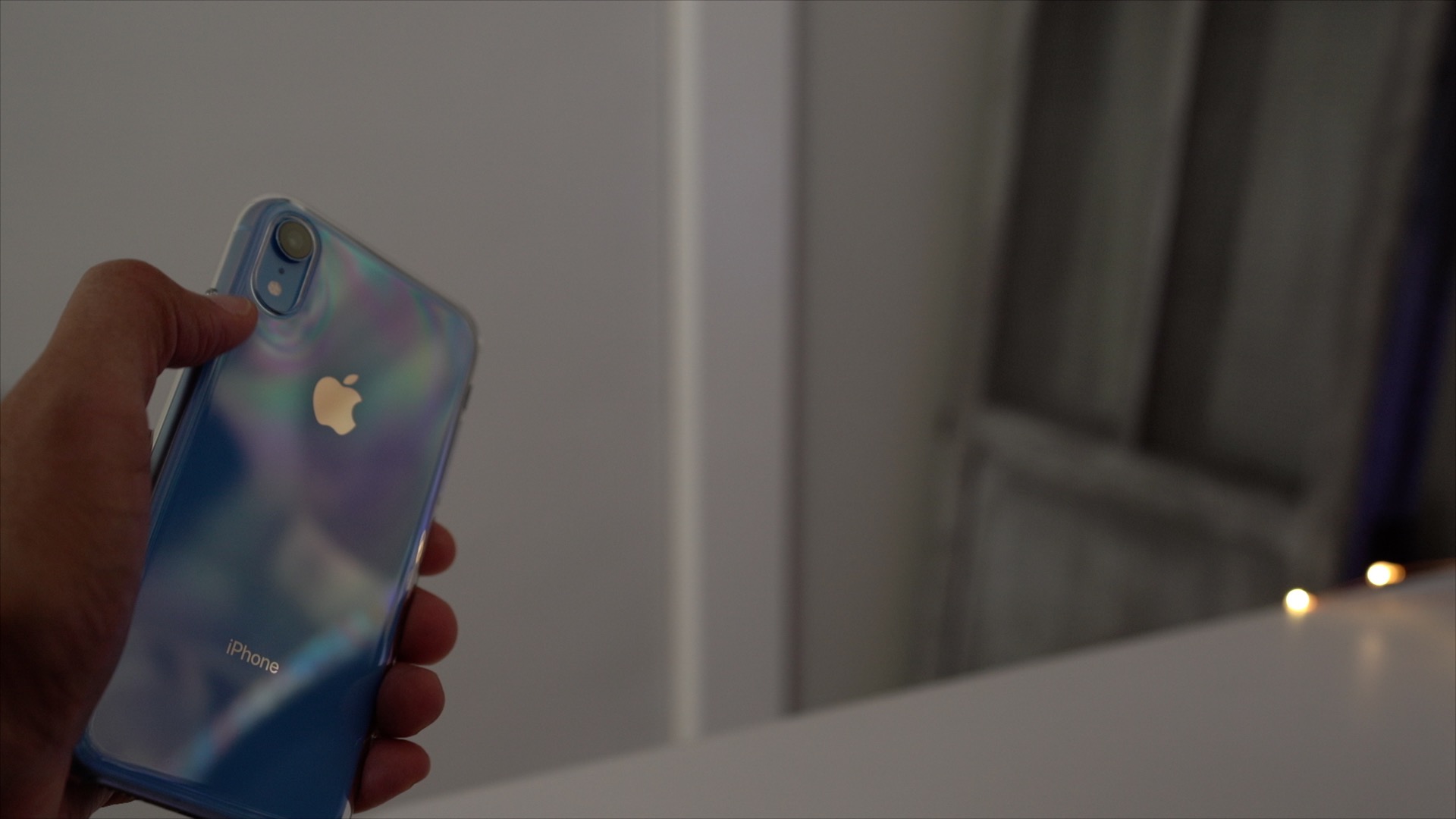 Another potential concern is the yellowing of the clear plastic over time. Since the iPhone XR Clear Case just arrived today, I can’t test how well its holds up under prolonged sun exposure. I plan on putting the case to the test, and will report back with my findings.

The design of the case makes it obvious that Apple thought about the way we use our iPhones. The cutout at the bottom of the case is something that we don’t always see on third-party case offerings. This design is important because of the way it allows the user to freely initiate gesture controls. 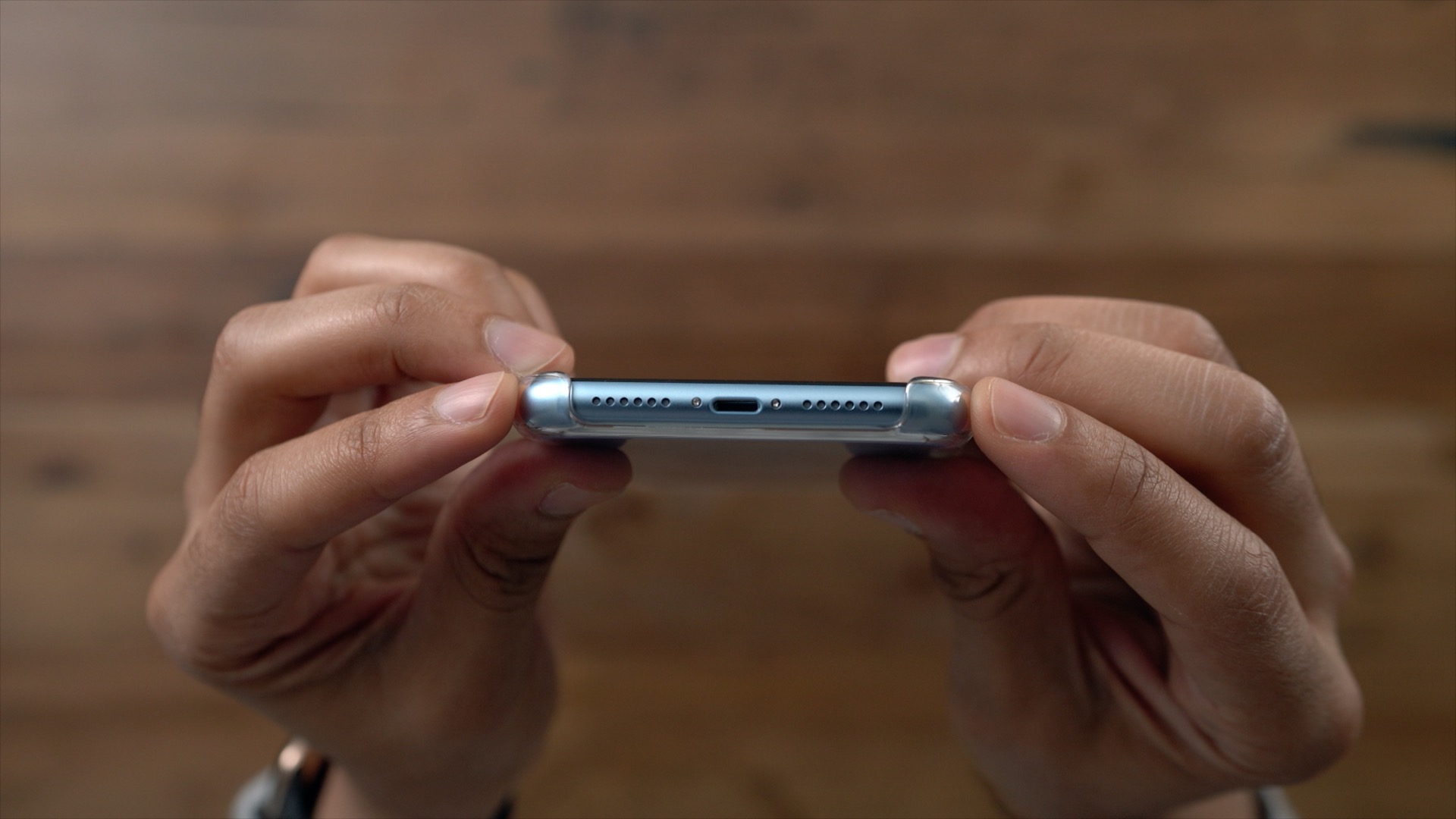 I like that the clear plastic used by the iPhone XR Clear Case is crystal clear; it’s like looking through a freshly cleaned window. This fact, coupled with the variety of colors available for the iPhone XR, makes for a great-looking combination. Unfortunately, the rainbow effect might rear its ugly head from time to time, but it’s not bad enough to where I wouldn’t recommend the case just for that. 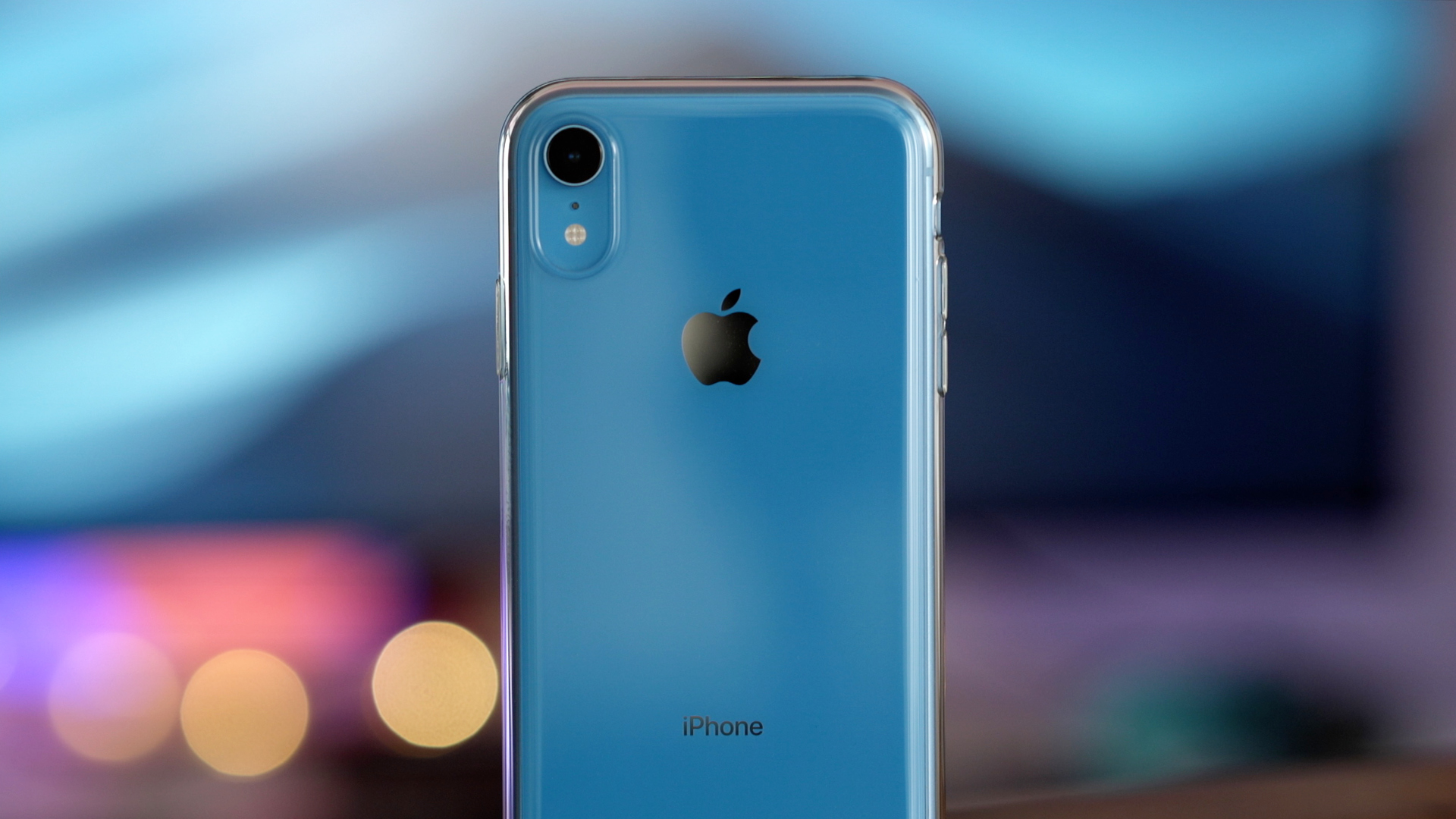 We’ll have to wait a while before we can tell how well this case holds up to UV exposure. One would think that this is an issue Apple worked hard to address, but only time will tell if the case is subject to yellowing after prolonged use.

If the case doesn’t end up yellowing, then its asking price will be that much easier to justify. I’ll report back once I’ve tested it in this regard.

The bottom line is that there are cheaper third-party iPhone XR clear cases available, particularly ones with much better button feedback. Yet, many of these third-party offerings lack the cut out at the bottom that’s so important for gesture controls. In my opinion, gesture controls trump everything else, as it’s something you use constantly while engaged with iPhones that lack the physical Home button. 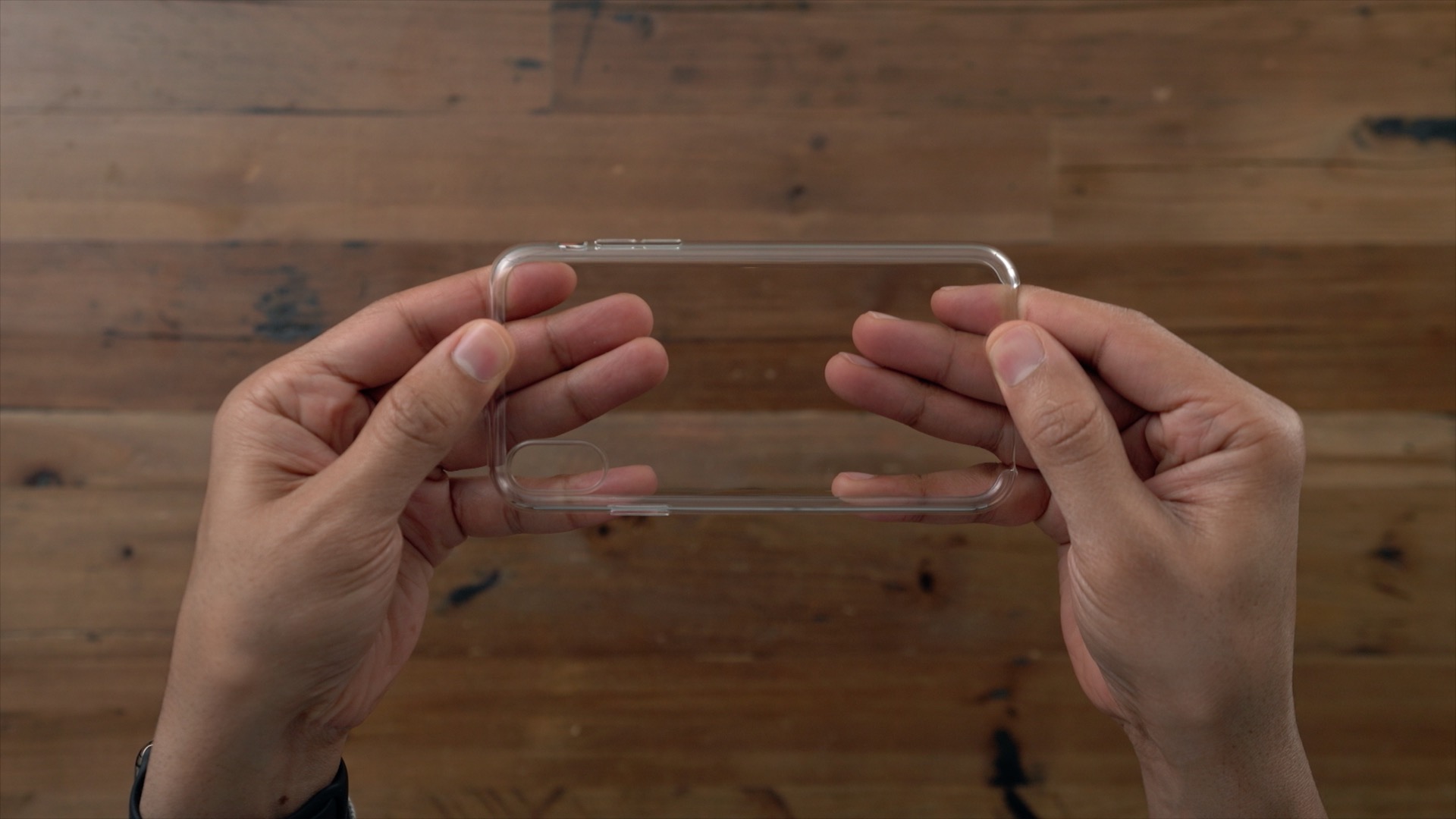 The iPhone XR Clear Case will do a great job of protecting your phone, and looks fairly good in the process. It’s undeniably overpriced, and has iffy tactile button response, but it gets most of everything else right.

For now, I softly recommend Apple’s clear case if you’re an iPhone XR user that must have a case. However, if you can find a decent (and undoubtedly way cheaper) third-party case that doesn’t interfere with gesture controls, I’d recommend going that route. What do you think?