Apple to build new $1bn campus in Austin, add thousands of jobs across the USA

Apple today announced plans to build a new campus in North Austin, representing a $1 billion investment. It will also add thousands of new jobs across the United States by 2023, with new offices set up in Seattle, San Diego, and Culver City.

Apple will create 20,000 jobs in the United States by 2023 with a significant swelling in Austin thanks to the new campus. Today, Apple currently employs 6,200 workers in Austin.

The Austin campus will be located within a mile of Apple’s existing Austin facilities, and will initially hold 5,000 employees with capacity to grow to 15,000 over time.

The new campus will of course be powered by 100 percent renewable energy, and will feature 50 acres of preserved open space. The campus will support engineering, R&D, operating, finance, sales and customer support.

In a statement, Apple CEO Tim Cook said Apple is ‘proud to bring new opportunity to cities across the United States and to significantly deepen our quarter-century partnership with the city and people of Austin’.

Design plans and timelines for the Austin campus are yet to be announced. Apple’s most recent major new campus, Apple Park, was started in 2011 and originally scheduled to be completed in 2015. However, various delays meant employees only began moving in late 2017. 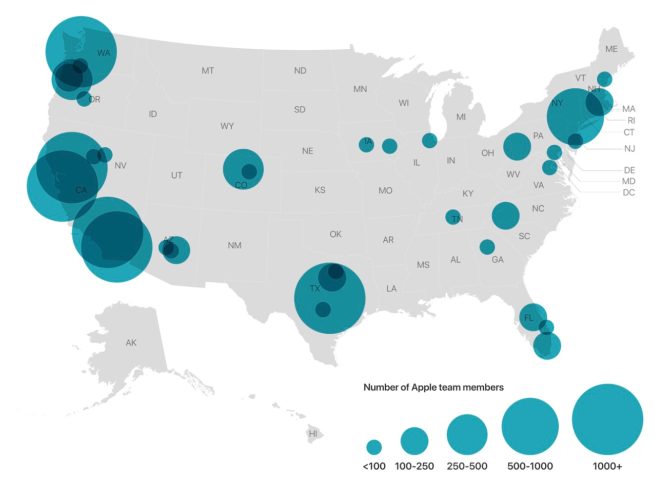 In cities like Seattle, San Diego, and Culver City, Apple says it will grow to over 1,000 employees over the next three years. It will add ‘hundreds’ of new jobs in Pittsburgh, New York, Boulder, Boston, Portland, and Oregon.

As far as data centers are concerned, Apple will continue its strong domestic investment in that area as well. It plans to invest $10 billion in US data centers over the next five years. It is adding a new site in Waukee soon, and is expanding its data centers in North Carolina, Arizona and Nevada.