Comment: Are Apple products getting more expensive? That depends …

It’s almost accepted as a truism now that Apple products are getting more expensive – and indeed, there’s plenty of data to support that contention.

Headline prices of Macs and iPads might suggest the same is true there, but that’s not necessarily the case …

The Washington Post has an interesting analysis, comparing the price of various Apple products with both inflation and other spending categories. It begins with the undeniable fact that the iPhone isn’t the only product category where prices have increased.

Indeed, it shows that the price of the entry-level Mac mini climbed almost 60% – a steeper increase than the iPhone – with the Apple TV not far behind it. The new MacBook Air is now 20% more expensive. But in all three cases, there’s no real comparison between the products on sale in 2014 and 2018.

The Mac mini has gone from being an entry-level Mac aimed at Windows switchers to pro-level machine primarily geared to server farms and those who want a powerful standalone desktop Mac without going into Mac Pro territory.

Similarly with Apple TV, you can’t really compare a 1080p box with a basic infra-red remote to a 4K HDR-capable one with touchpad-equipped remote and Siri support.

The MacBook Air, likewise, is a dramatically better machine than the previous generation, thanks to a Retina display, Thunderbolt 3 connectivity and Touch ID. And it’s a perfectly viable alternative to the far more expensive MacBook Pro range for most people.

In none of these cases are you buying remotely the same device in 2018 as you did in 2014.

What Apple has done is persuade us that we want more and better tech (even if some would complain that Apple’s idea of ‘better’ doesn’t match their own, especially when it comes to the greatly reduced user-upgradability of Macs). 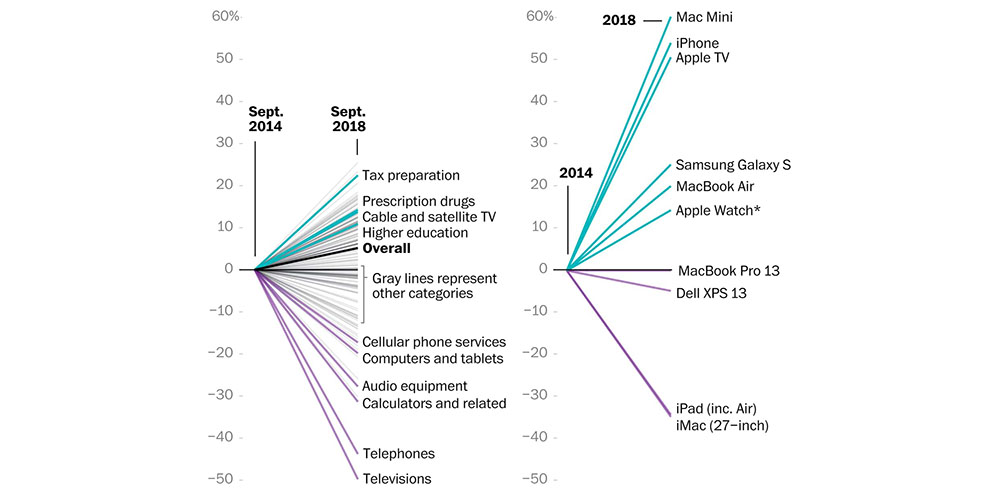 Some Apple devices are cheaper now

But, as the Washington Post piece observes, some Apple products have actually fallen substantially in price if you look not at the ASP, but at the entry-level option.

For example, the iPad. Compare the cheapest iPad available in 2014 with the cheapest model sold in 2018, and the price has fallen around 35%. The same is true of the 27-inch iMac. What the company has done in both cases is to expand the price ranges on offer – both up and down. If you want the best model in the lineup, then yep, be prepared to pay a lot more for it. But the entry-level model is better value than ever.

And it’s worth pointing out that it doesn’t matter whether you’re talking iPhone, iPad or Mac: the truth is that the cheapest model in the line-up will actually work well for the vast majority of users. Absolutely all of them will make a good job of the things most people do – email, web, watching videos, playing undemanding games. Indeed, I’d argue that base model iPads and Macs also do well enough with the kind of occasional basic photo and video editing done by the average consumer.

So sure, the price of the MacBook Pro range increased dramatically. But the new MacBook Air is a perfectly fine machine for the vast majority of people who are not doing pro-level photo, audio or video work.

Now, you can raise a hand in objection here, noting that I recently said I was actually advising friends to buy the most expensive iPad on offer, and that’s absolutely true. But that’s not because the entry-level one wouldn’t serve them well, it’s because I think the 12.9-incher offers such a fantastic experience that it’s worth the money if you can comfortably afford it. If you can’t, the cheapest iPad is still an excellent buy. And my most common Mac recommendation is the new MacBook Air, rather than any of the Pro models.

Apple pricing is largely in our control

With iOS 12, Apple also ensured that iPhones as far as the iPhone 5s remain perfectly usable. Sure, you’ll miss out on the latest and greatest features, but it will still perform well.

Indeed, one perfectly sensible response to areas where Apple has increased the price – or where it has persuaded you that you want one of the more expensive models – is to simply hold onto your device for an extra year or two. Apple products have always had good longevity in terms of both performance and support for OS updates, and they also hold their value well.

Both factors are why I’ve argued in the past that the ‘Apple tax’ is far lower than it seems. We’ll have to see how resale values hold up for the more recent models, but I suspect the same will be true.

So yes, Apple is absolutely doing its best to push us up the price curve. But in most cases, it’s not making that mandatory – there are still cheaper models on the table that will do everything the average customer requires of them. Ultimately, if we end up paying higher prices for Apple kit, the responsibility for that is as much down to us as it is to Apple.

So that’s my view: Apple would like us to spend more, but it offers a sufficiently broad product range that we can choose not to. What’s your view? As always, please share your thoughts in the comments.