Looking to get activity credit for skiing or snowboarding this winter with your Apple Watch but also want more detailed data like vertical descent, speed, number of runs, and more? Whether you hit up to your local resort regularly, or are about to head to one on a holiday trip, follow along as we look at two solid apps for Apple Watch to take your ski and ride tracking to the next level. We’ll also look at some cool social features, with one app offering a fun way to compete with friends on the mountain.

Apple launched improved tracking for skiing and snowboarding earlier this year for Apple Watch Series 3 and later. The enhanced capabilities arrived via new APIs that third-party apps can use. These include metrics like vertical descent, distance, number of runs, time on lifts vs. runs, average speed, in addition to earning credit for your exercise and move rings.

Interesting enough, for now these features aren’t available with the default Apple Watch Workout app. That only offers a generic “Snow Sports” category for tracking skiing and snowboarding, so third-party apps are the best way to go for the most accurate data. 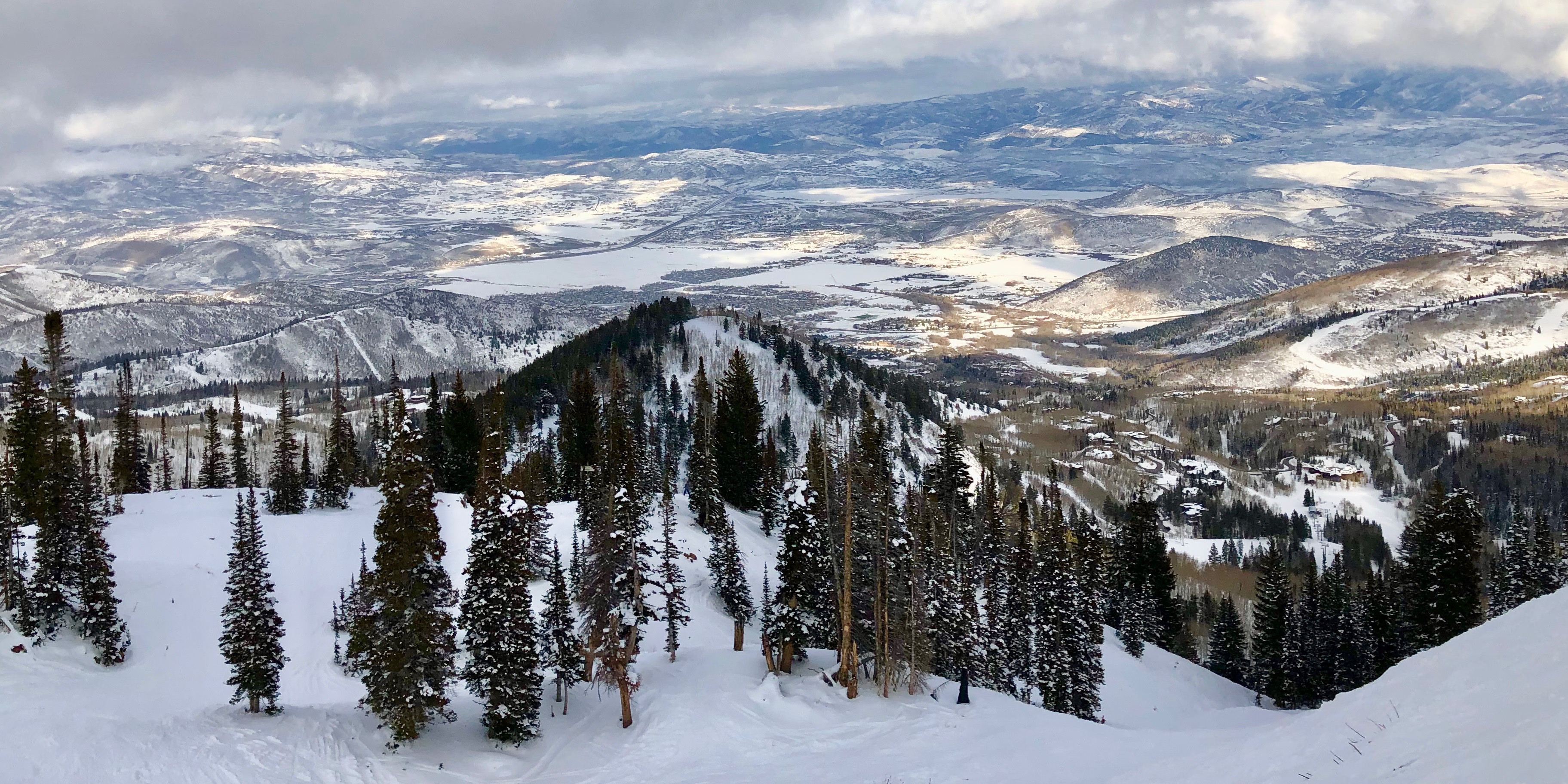 At just under 10,000 feet at Park City Mountain Resort

So far I have two favorite Apple Watch apps, and they both have unique strengths. Slopes has a great UI, solid features like Siri Shortcuts, music playback control, and more.

Snocru is another great option that blends ski and ride tracking with a social aspect. Both apps offer a solid free experience with optional subscriptions to support the developers and unlock all the features. Let’s take a look!

Apple recommended a few apps in its newsroom post about improved ski and snowboard activity tracking, and Slopes was the first option highlighted.

I really like the clean, simple interface on both Apple Watch and iPhone. The free version is even ad-free with a solid amount of features (paid version available to support the developer and unlock even more functionality). Here’s how the Apple Watch app interface looks:

You can swipe between three pages to get a quick look at your stats while you’re on a lift. Integrated music playback control is really great. As an aside, I’ve found AirPods aren’t too comfortable under a helmet after an hour or so. If you have a relatively new helmet you can integrate specially made wireless speakers with mics into it like Outdoor Tech’s Chips 2.0 for about $95.

You can lock your Watch (like when swimming) if you want to prevent any unintended taps. On the main screen shown above, you can see your top speed, speed for your last run, vertical descent, total miles, and total time.

You can see even more data when you look at saved sessions on your iPhone.

The main Slopes screen on iPhone shows your lifetime stats, with quick access to a start button below for new sessions. There’s also an option to select “Unlisted Resort” if yours isn’t showing up in the app for some reason, as well as an “Off-piste” selection for backcountry riding or heli-skiing trips.

The history tab at the bottom of the app lets you check out your saved activity. For the free version that includes top speed, tallest run, peak altitude, longest run, average speed, and calories burned.

There’s also a graph showing your time broken down by runs, lifts, and lift lines (don’t forget to pause your tracking if you stop for a rest or a bite to eat.)

Other features that make Slopes my favorite ski and snowboard tracker include Siri Shortcuts support, the option to set location-based reminders when you cross a geofence with your local mountain, and 12 app icons to choose from.

For those that want to support developer Consumed by Code and unlock all advanced features that come with the $20/year subscription you’ll get:

Slopes also offers a $2/day option if you want to test out the premium version before doing a yearly subscription.

After using the free Slopes version a couple of times, I’ve enjoyed it so much that I’ll be picking up the Premium version. Keep in mind you’ll need an Apple Watch Series 3 or 4 to take advantage of all the features.

Slopes has a stellar 4.8/5 star average rating on 6,500 reviews. It is a free download from the App Store.

Snocru is another good app that Apple recommended as it rolled out the improved ski and snowboard tracking earlier this year. Like Slopes, Snocru gives users lots of great data, but comes with an additional social focus in what feels like a blend of Strava and Foursquare. I realized after using Snocru that the company is actually based in my hometown.

The free version does include ads, but I appreciate that developers need to create revenue to continue supporting their apps and introduce new features.

The free version offers tracking for max speed, average speed, total distance (descending and ascending), vertical descent and ascent, max and min altitude, total time, and calories burned. Like Slopes you get credit for your exercise and move rings with Apple Watch. 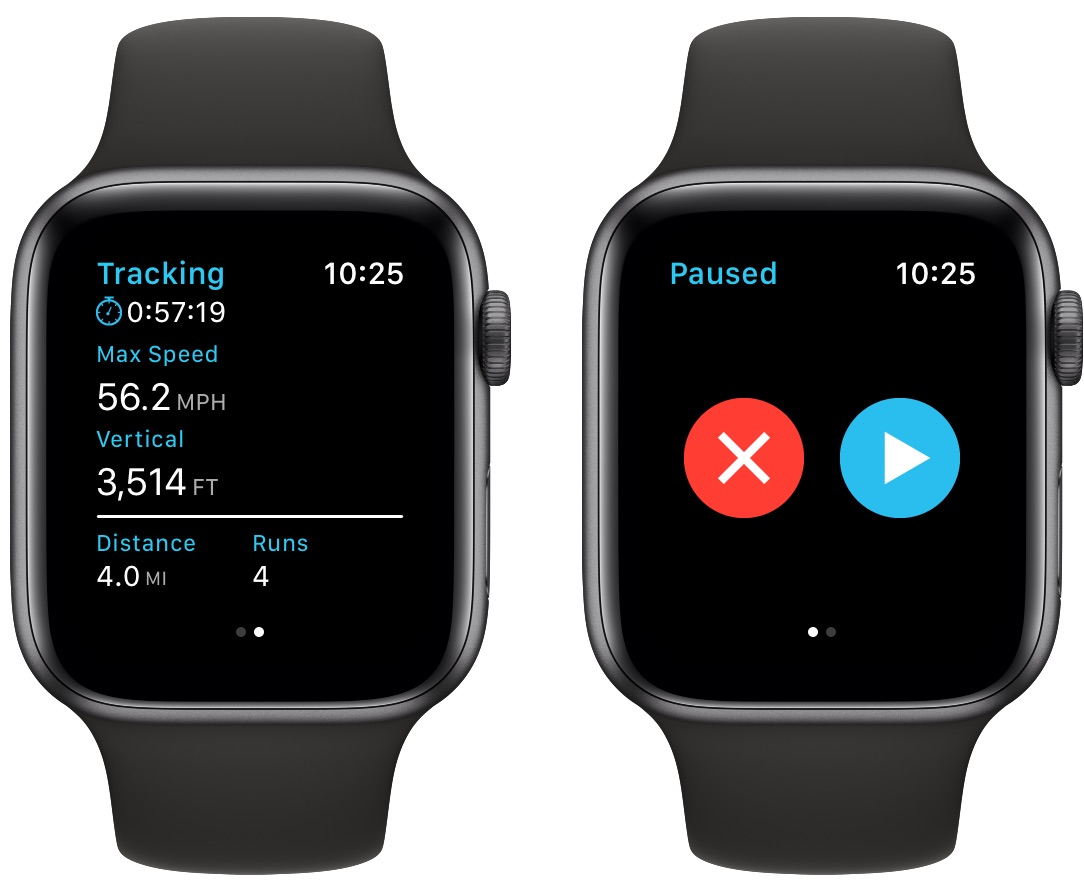 Definitely more basic than the Slopes watch interface, but it still gives you a nice quick look at some of your main stats. However, no integrated music playback controls here.

Here’s how the iPhone app looks: 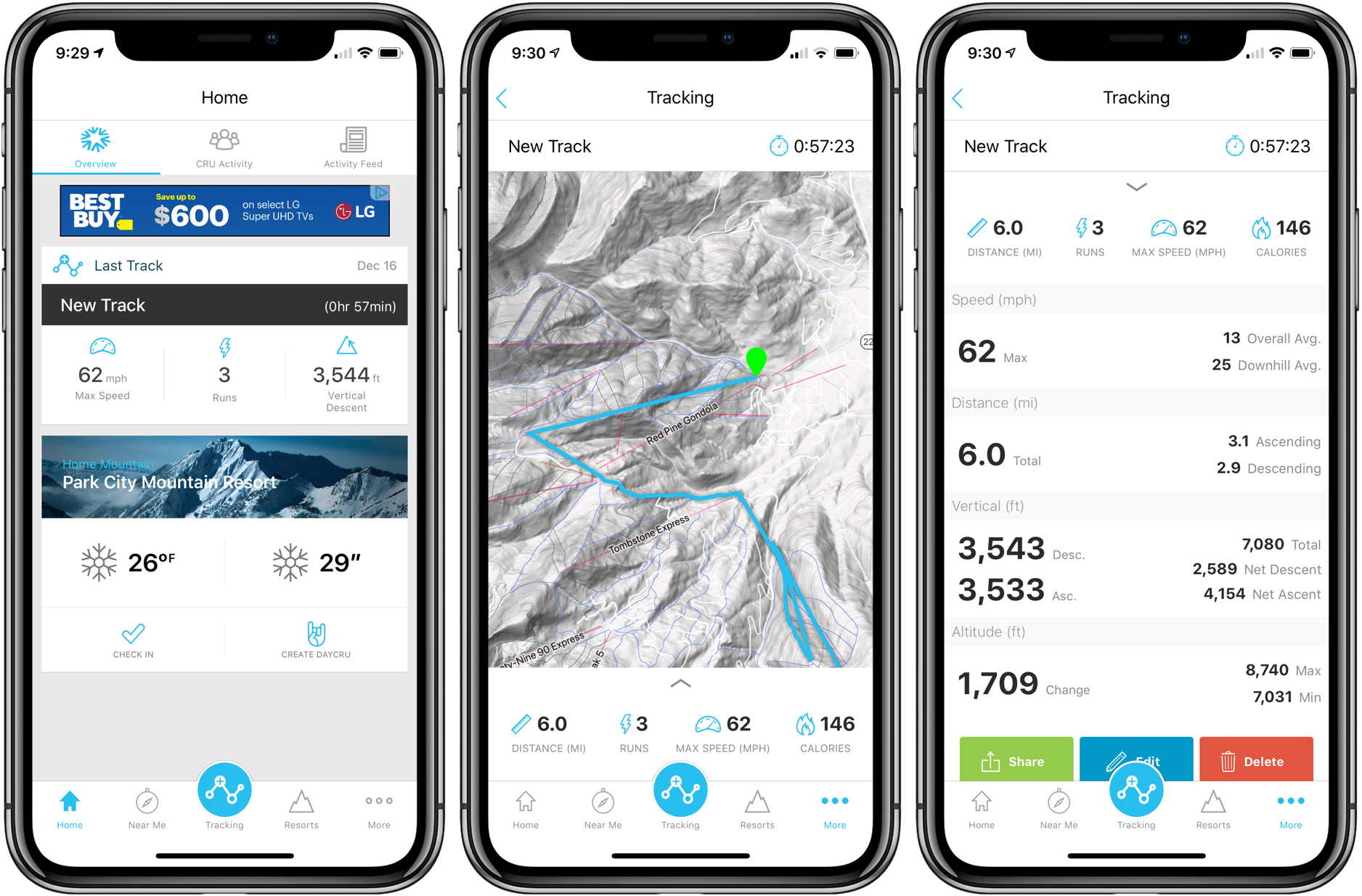 The main screen shows you most recent recording, and also gives you the conditions at your local mountain, which is neat feature.

Tabs at the bottom allow you to start a new session, locate friends near you, pull up a list of nearby resorts with current conditions, and more.

You’ll find the social aspect come into play in a couple of ways. First there are public leaderboards a la Strava for top speed, number of runs, number of check-ins, and number of days tracked.

But the real social aspect is with the CRU and DAYCRU features. You can add friends to see who earns the top stats for a day on the mountain. You’ll also be able to locate other Snocru users in your area in addition to seeing lots of other related waypoints for

The full social features, advanced tracking, and ad-free experience come with the Snocru subscription which costs $5/month or $28/year after a 7-day free trial.

Snocru is a free download from the App Store with 4.4/5 stars on 500 ratings.

Depending on your preferences I think Slopes or Snocru will serve as an awesome way to get more out of your Apple Watch for tracking skiing and snowboarding. Both are worth trying out if you’re not sure which one to go with.

However, if you’re not as interested in the social features and prefer a cleaner UI, and value things like integrated music playback, Slopes will be a great fit.

If you’re interested in all the activity tracking, and dig the idea of connecting with others on the mountain and competing against your friends for bragging rights, definitely check out Snocru.