Despite Facebook’s shenanigans, Instagram has seemingly sparked in popularity this year.

Even as users #DeleteFacebook and boycott Twitter, Instagram has built a reputation for being a peaceful social network void of fights over democracy and privacy embarrassment. People are even willing to ignore the fact that Facebook owns and runs Instagram! Snapchat’s unpopular redesign may also be a factor.

There’s something about the constraints of the photo and video sharing service that just feels healthier for users. Instagram is also an eight-year-old iPhone app — it launched the same year as the iPad. As 2019 rolls in, the iPhone-only constraint is one that Instagram should remove and finally make an iPad app.

It makes so much sense. Instagram is fantastic for sharing our favorite photos and videos, and iPads are wonderful for appreciating both. Instagram Stories are even delightful (despite being blatantly ripped off from Snapchat). And IGTV appears to be a total dud, but a tablet version would be neat if it wasn’t!

(Instagram’s Layout app is also really nice. I see a lot of people use free ad-supported alternatives with watermarks over the collage. Switch to Layout even if you don’t want to post to Instagram.)

The lack of a dedicated Instagram for iPad app used to be an opportunity for developers. Retro for Instagram was a great solution, for example, but Instagram changed its API that gave developers access to the service in their apps.

Instagram killed the market for iPad app alternatives without making its own. Even the Twitter for Mac team must consider that savage — at least they only handicapped third-party apps after they killed their macOS client! 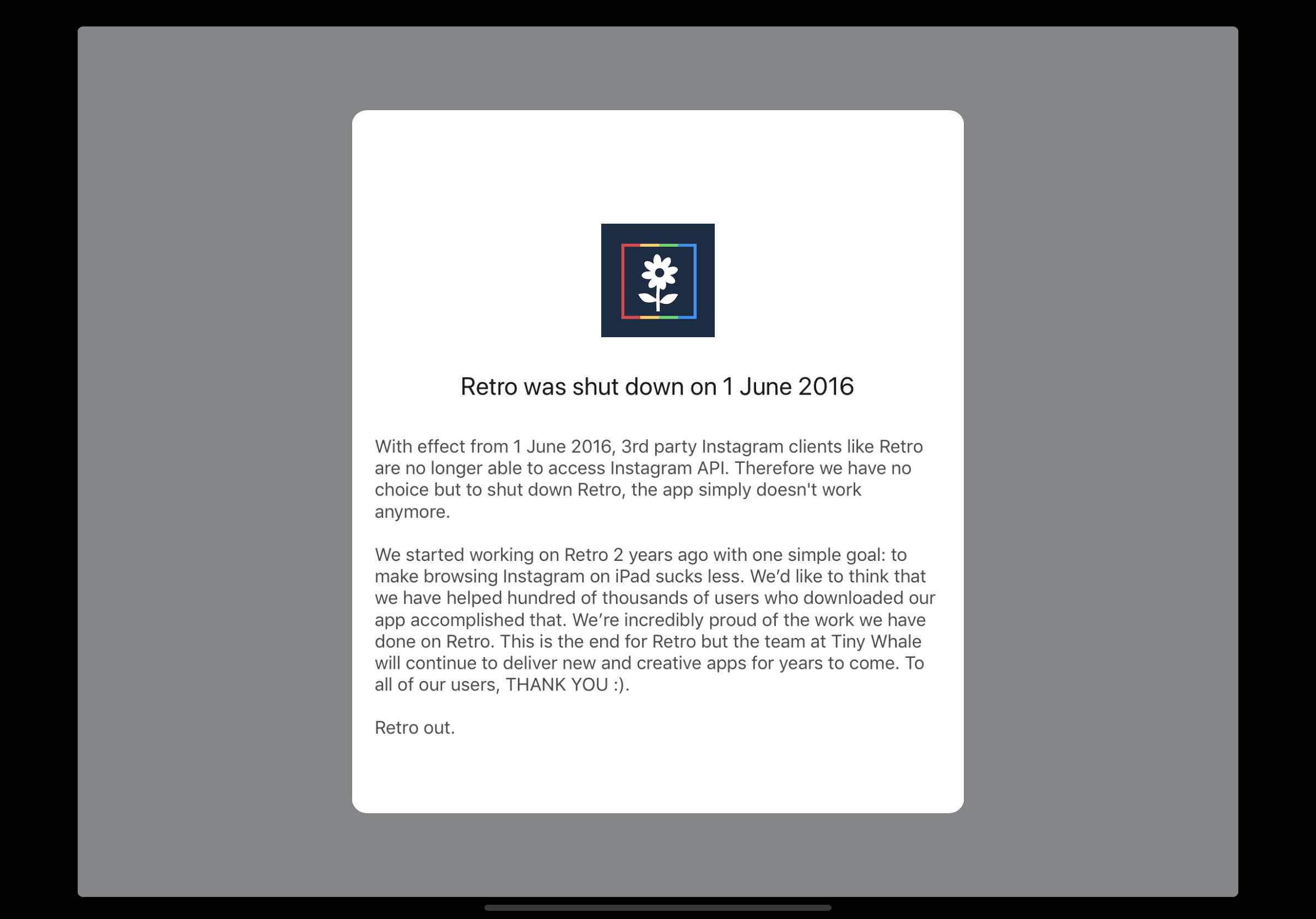 One argument is that the “progressive web app” on Instagram’s website is good enough if you save it to your Home screen. It’s okay, but it’s a total “sweet solution” that can’t enjoy the benefits of a real iPad app.

You can also run the iPhone version in a comically letterboxed window or scale it up at the cost of resolution fidelity, but there’s no landscape support and many iPads are attached to keyboards now. 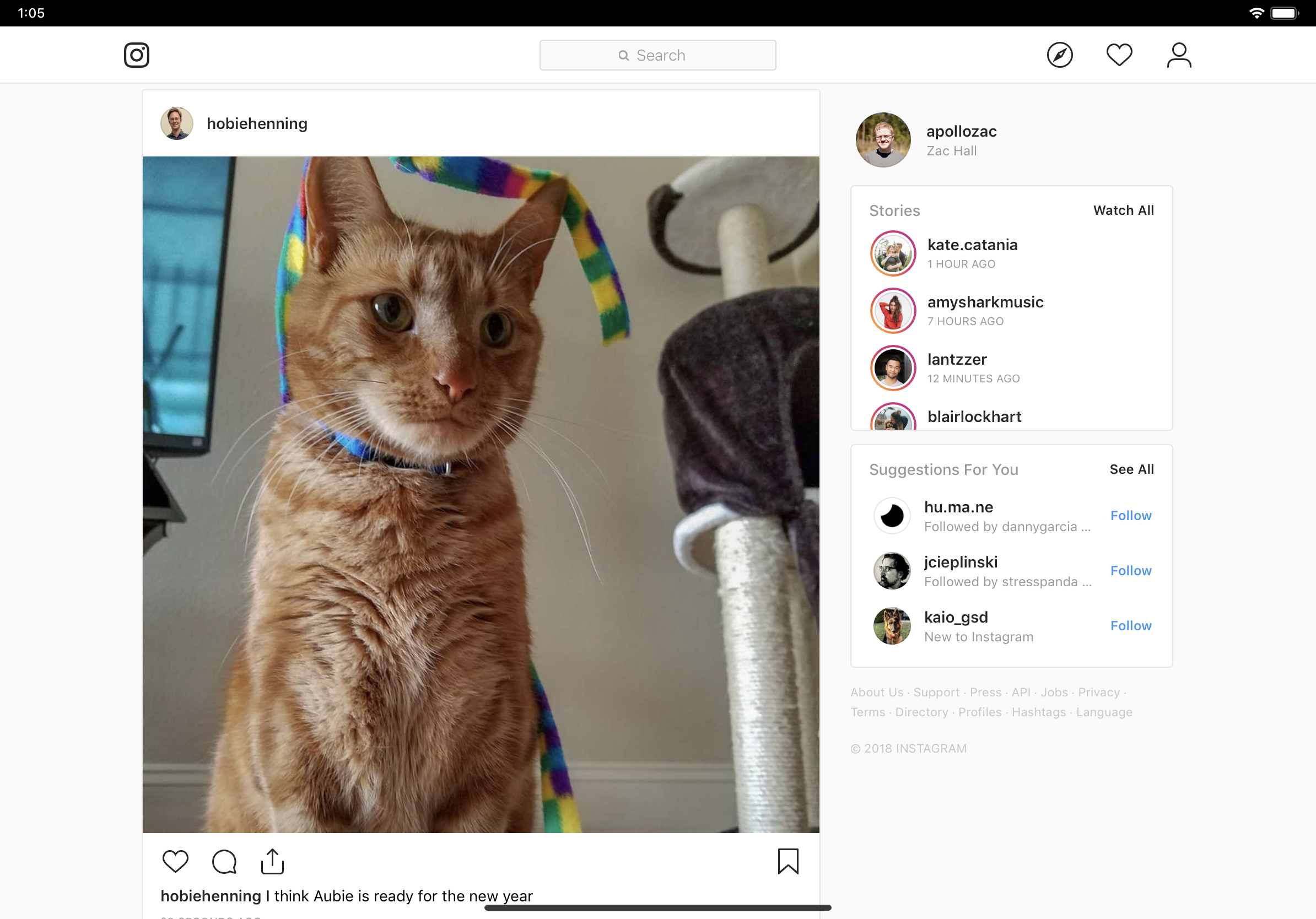 This, but as a real app, would be better than what we have now

Another argument against Instagram for iPad is that it’s a legacy technology problem: the quality of photos may be too low to properly present on a tablet display.

But that’s a problem that could easily be designed around! Instagram could ship a grid of photos and even mix ads in between! Bigger screen, more ads! That’s my best pitch to Instagram. 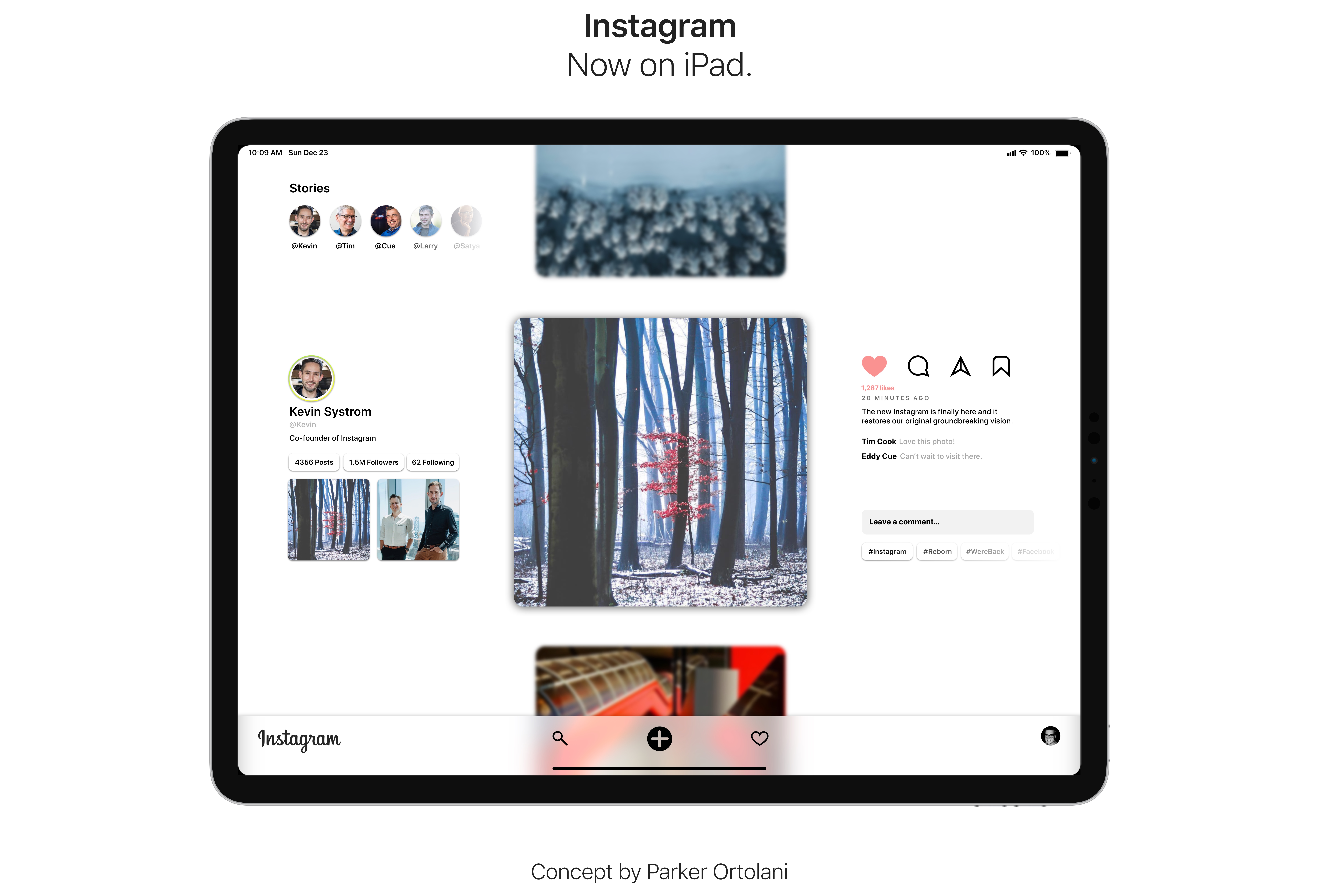 This awesome concept by Parker Ortolani is another excellent example of how Instagram could adapt its iPhone app for the iPad without losing visual fidelity on the big screen. I would love to sit and browse photos and videos on Instagram for iPad in an information dense layout with native resolution like that.

I don’t think there’s any hope for the Gotham filter returning, but I’m optimistic that Instagram for iPad just has to be around the corner. Now that video and messaging and Stories and group video calling and walkie-talkie and hundreds of other features are now available thanks to Instagram’s decision to aggressively compete with Snapchat, Instagram for iPad has to be next on the list, right? Maybe? Hopefully…