Onleaks kicked off iPhone 11 rumor frenzy about a week ago showing renders of a square camera bump that featured three cameras in awkward alignment. Today, he has partnered with CompareRaja to show what he believes is an alternative iPhone 11 prototype currently circulating manufacturing plants.

The phone depicted here is much easier on the eyes, with a slimmer camera bump and smaller notch on the front screen. The contrast in appearance between each of the purported protoypes is significant but Onleaks says both prototypes are legitimate …

After the initial leaks, the Wall Street Journal reported that the high-end iPhone 11 will indeed feature a triple-camera system on the back of the device. However, it did not detail a particular design.

In these latest renderings released today, the iPhone 11 moves the camera bump to the center of the phone horizontally. The camera bump is also shifted vertically downwards, presumably to stay out of the way of the internal space taken up the sensor housing.

The three lenses are packed tightly together in a pill shape. The camera flash changes from a standalone hole to a ring that encircles the middle of the three lenses.

The rear mic is squeezed in below the center camera. 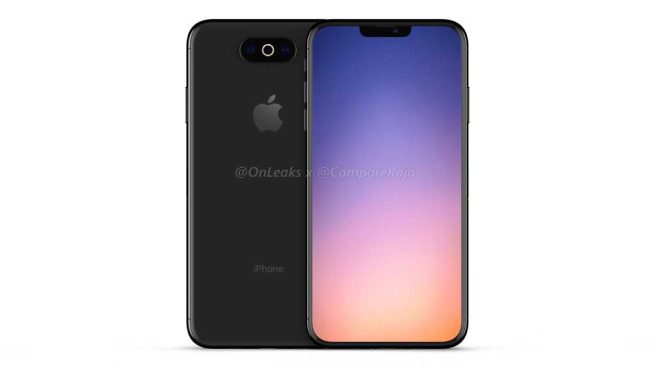 This prototype also shows off possible design changes for the iPhone 11 screen. In addition to marginally thinner side bezels, the notch sees a significant redesign.

The amount the notch cuts into the screen decreases as the proposed notch is less wide than what we are used to with iPhone X, iPhone XR or iPhone XS. This is achieved by moving the earpiece above the other components.

In summary, several components are much more densely packed than we have seen with previous iPhones. It also looks far more pretty and streamlined than the bulging rounded rectangle bump that was on display in the earlier rendering.

The real debate is how do you reconcile this design with the (uglier) variation we saw a week ago. Compareraja and Onleaks assert that both of these prototypes are making the rounds, at the early engineering validation test stages of production.

Personally, it seems unlikely that Apple would be pondering two dramatically different designs at this stage. Another possibility is that Apple will release multiple new iPhones this year with significantly different appearances.