How to play vinyl with AirPlay or Bluetooth to HomePod, headphones, and more

In the age of digital media, users may sometimes forget what it was like with physical media formats, specifically with audio. Through the years we’ve had CD, cassette, digital, and vinyl. Wouldn’t it be nice to be able to play vinyl through something like your Bluetooth headphones, modern speakers, or even HomePod?

We’ve scoured the web and have done extensive testing just for our readers. Here are the best ways to play vinyl through a digital audio source.

If you’re looking for the cheapest entry point to getting this done, your best bet is to find a record player that has RCA or 3.5mm out. From there, you can either plug them into your audio device (speaker/headphones) directly, if they support that, or buy a Bluetooth transmitter for your wireless Bluetooth devices for a seamless experience. The only issue with this is you won’t be able to play through AirPlay-only devices such as a HomePod with this setup.

If you want to have AirPlay instead of Bluetooth, you’ll unfortuantely be out of luck. Something like the now-discontinued AirPort Express can only output audio to external devices, not take an existing signal and convert it to AirPlay.

This isn’t really a “method” so to speak. But, if you’ve never owned a vinyl player and would like to start, here’s how you can future proof yourself. 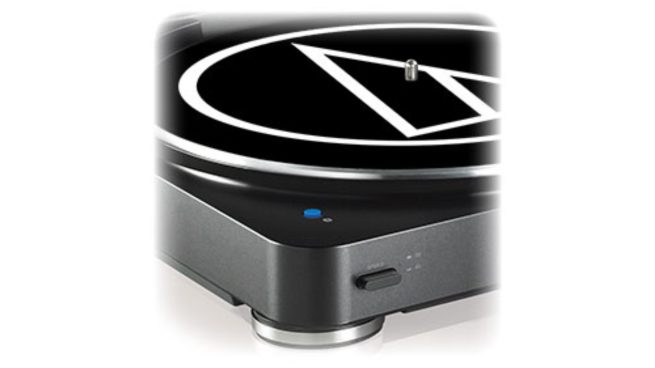 This is by far the most expensive method, but if you already have all the parts in place, it’s the best way to listen to your vinyl player over a digital connection.

What you’ll need is a computer, whether it be a Mac or Windows machine, a vinyl player that has a built-in USB port for audio over USB, and a copy of Rogue Amoeba’s Airfoil utility.

You’ll first need to plug your vinyl player into your computer. Make sure it’s detected as an output device in your Sound preferences, as seen in the screenshots below.

Once you’ve confirmed that your computer detects the vinyl player, fire up AirFoil. Tap on the drop-down menu and select your input source (in this instance “USB AUDIO CODEC”.)

Now select your output devices. Despite AirFoil only being AirPlay 1-capable, you can select multiple AirPlay targets, including Bluetooth and Google Cast devices at the same time. Just note that AirFoil’s delay is based on the output source with the most latency, in this case AirPlay 1, which has a 2-second delay.

You can also go into AirFoil’s preferences and automate the process if you have a speaker or headphone you always connect to. This option will have AirFoil automatically connect to that source every time the app is launched.

Once connected, simply put on a vinyl and you’re good to go!

No matter which method you decide to go with, the end goal is the same: playing your vinyl over a wireless connection (AirPlay, Bluetooth, Google Cast, etc.). Each method has its pros and cons, but they all work well enough depending on your needs.

The most important part of the whole equation is getting a great record player. Learn more here.