Robot vacuums remains one obvious category HomeKit should support in the future. HomeKit support would bring voice control for vacuums through Siri, app control through the Home app and Control Center, and clean up scheduling through automation — all in the same app you manage other smart home accessories.

Even without HomeKit support, you can build your own Siri control for Wi-Fi-enabled iRobot Roomba vacuums using MacStories‘ very helpful guide for connecting IFTTT (If This Then That) triggers to Apple’s Shortcuts app on iOS 12. Here’s my Siri-controlled robot vacuum experience and best practice recommendations:

iRobot Roomba vacuums are already super convenient for assisting in vacuum jobs in between deeper clean ups. You can schedule clean ups, remotely start and stop jobs in iRobot’s iOS app, or use voice control with Amazon’s Alexa voice assistant.

But you can’t control Roomba with Siri out of the box. That means no voice control if you don’t have an Amazon Echo or Alexa-enabled smart speaker. Using Siri and Shortcuts, you can build custom voice commands that control Roomba from HomePod, iPhone, iPad, and Apple Watch.

Siri control is especially great for remotely controlling with voice commands when you’re not home. Want to come home to a clean floor? Just tell Siri.

What do you need?

Before you get started, you’ll need a Wi-Fi-enabled iRobot Roomba vacuum, an iPhone or iPad running iOS 12 with the Shortcuts app installed, and an IFTTT account. You’ll also want to have your Roomba set up and connected to your Wi-Fi network so it’s ready to go.

You should also bookmark Federico Viticci’s resource-rich tutorial which includes inspiration for this guide in the form of a demo of Myke Hurley’s Roomba vacuum being controlled by Siri.

For each Roomba action, you first need to create an automation on IFTTT that connects a webhook with an iRobot command. If that sentence makes you panic like it did me, don’t worry: you’re really just clicking a few buttons and moving some text around.

Type in ‘web’ in the search box, then select Webhooks:

Enter an ‘Event Name’ for the action that makes sense to you. You’ll later need to plug this text into the Shortcuts app. Then select ‘Create trigger’:

Select the blue ‘that’ link:

For each command, select the corresponding action:

Finally, optionally turn off the alerts for when the action runs, then select ‘Finish’ to save your automation: 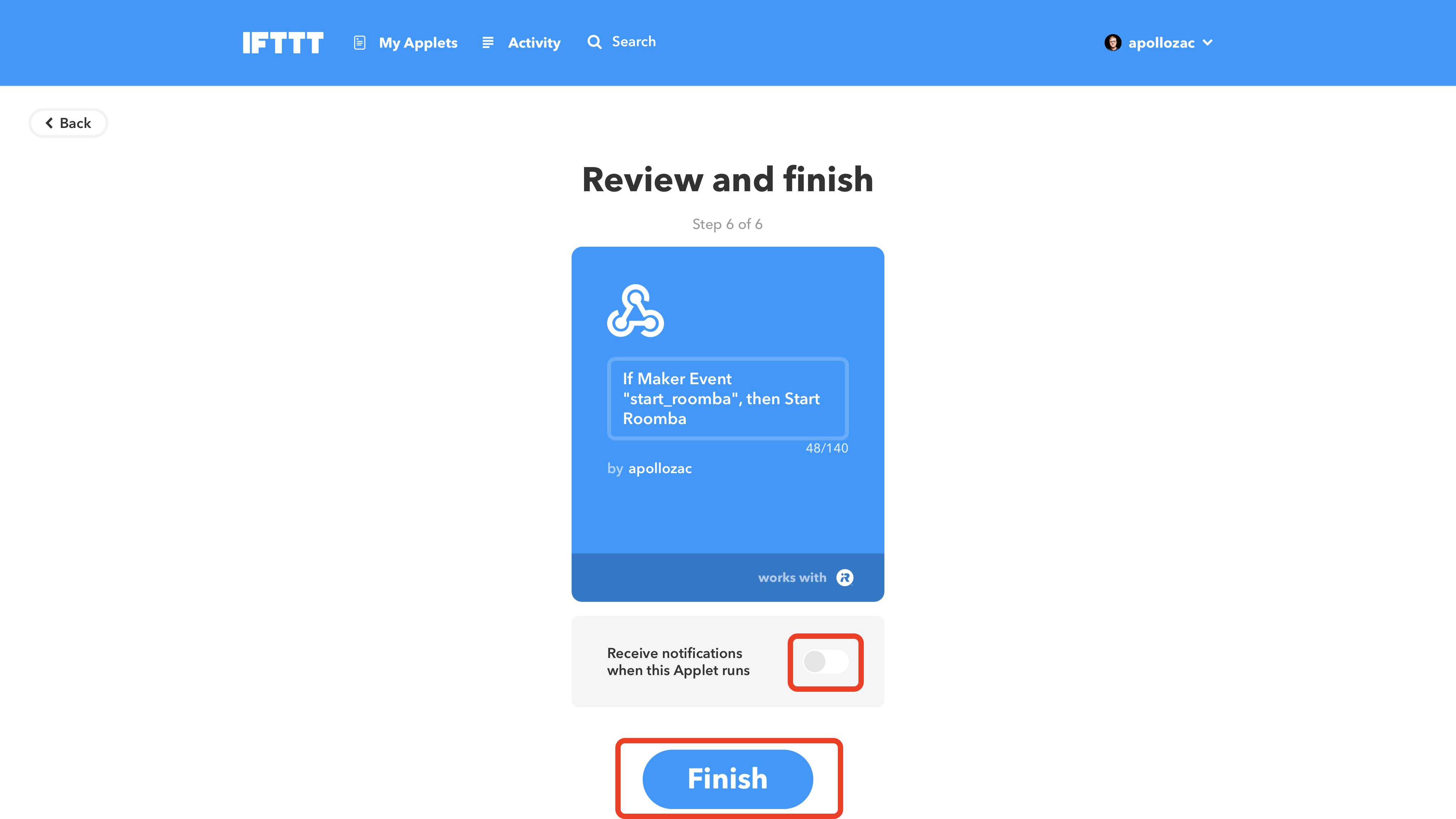 You can repeat each of those steps for each Roomba action (i.e. start, stop, pause, dock), only changing the ‘event name’ text, then you’re almost finished with the IFTTT side.

The last step is copying your unique key (something only you should have and no one else) and the example text string that you will later adjust for each action in Shortcuts (this string includes your key so don’t share it).

Then copy and store your key and example text string. I chose to select and copy mine into a note in Apple Notes (which you can optionally lock):

(c0w-m00-pig-0ink is not actually my key, although it was once my old AIM screen name) 😀

Once the behind-the-scenes groundwork has been created on IFTTT, you’re ready to build shortcuts on your iPhone or iPad with the Shortcuts app. Each shortcut only includes four steps: two text boxes, one URL box, and one Get content of URL box.

Once your four steps are in place, you can customize your shortcut with the double toggle icon below the ‘Done’ button at the top right. Give your shortcut a name, personalize the icon, optionally add or remove it from the Shortcuts app widget, then create a custom Siri phrase for triggering the action with voice.

After you create your first shortcut for controlling your Roomba with Shortcuts, you can use the share sheet from the action button (upward arrow) to find ‘Duplicate Shortcut’ action. This lets you easily copy your shortcut template, then you can tweak the event name and URL for each following shortcut.

For my shortcut icons, I chose a traffic light color system: green for go, yellow for slow down, and red for stop, then purple to differentiate for go home.

Your Siri phrase for each shortcut can be whatever you want (as long as it’s not a Siri phrase for another shortcut). Ideally, I like to keep these concise: “start Roomba,” “pause Roomba,” “stop Roomba,” and “dock Roomba.” The idea is each voice command can be optimized for speed.

But … I also like to have more organic, natural language commands. That’s where Siri phrases for shortcuts and Siri out of the box differ. You can tell Siri out-of-the-box to send a message in lots of different ways, but Siri commands that you build on your own are limited to one phrase per shortcut. 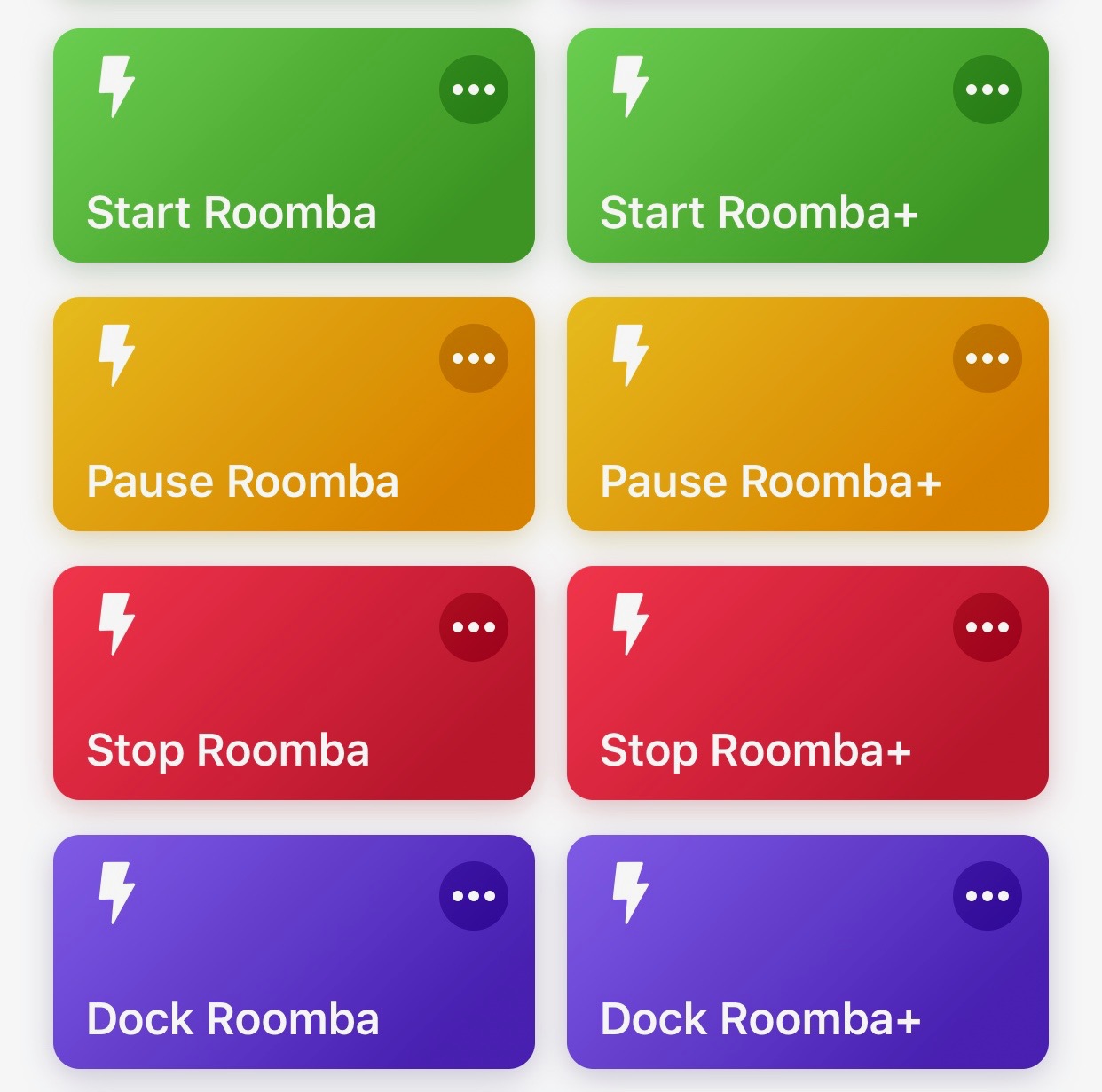 Otherwise, all of the steps within each duplicate shortcut mirrors the shortcut that it copied. No need to do any additional work with IFTTT!

This lets me say ‘Hey Siri, dock Roomba’ or ‘Hey Siri, tell Roomba to go home’ from iPhone, iPad, Apple Watch, or HomePod, and Siri will run the shortcut and send the right command to my Roomba. (I opted to match the longer commands with what Alexa requires for consistency.) 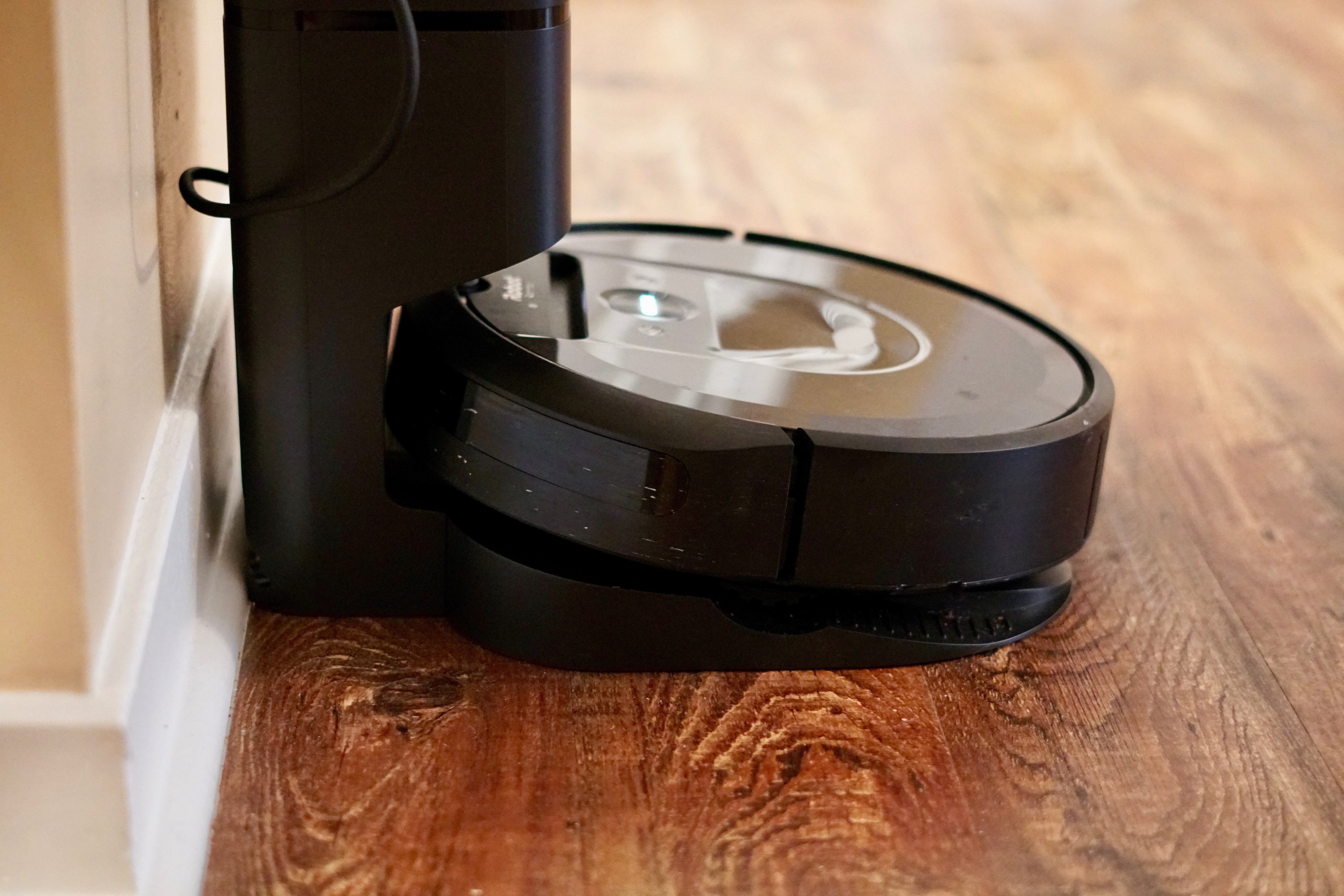 Connecting Siri to a Wi-Fi-enabled iRobot Roomba vacuum takes a bit of work, but you certainly don’t need to be a programmer or know a development language to figure it out. Using IFTTT and the tools within the Shortcuts app, you can connect Roomba to Siri and gain voice control from iPhone, iPad, Apple Watch, or HomePod in just an hour or so … then enjoy the benefits going forward.

For more ideas of how to use IFTTT and Shortcuts, check out MacStories’ tutorial which inspired this guide, and share your own experience in the comments!