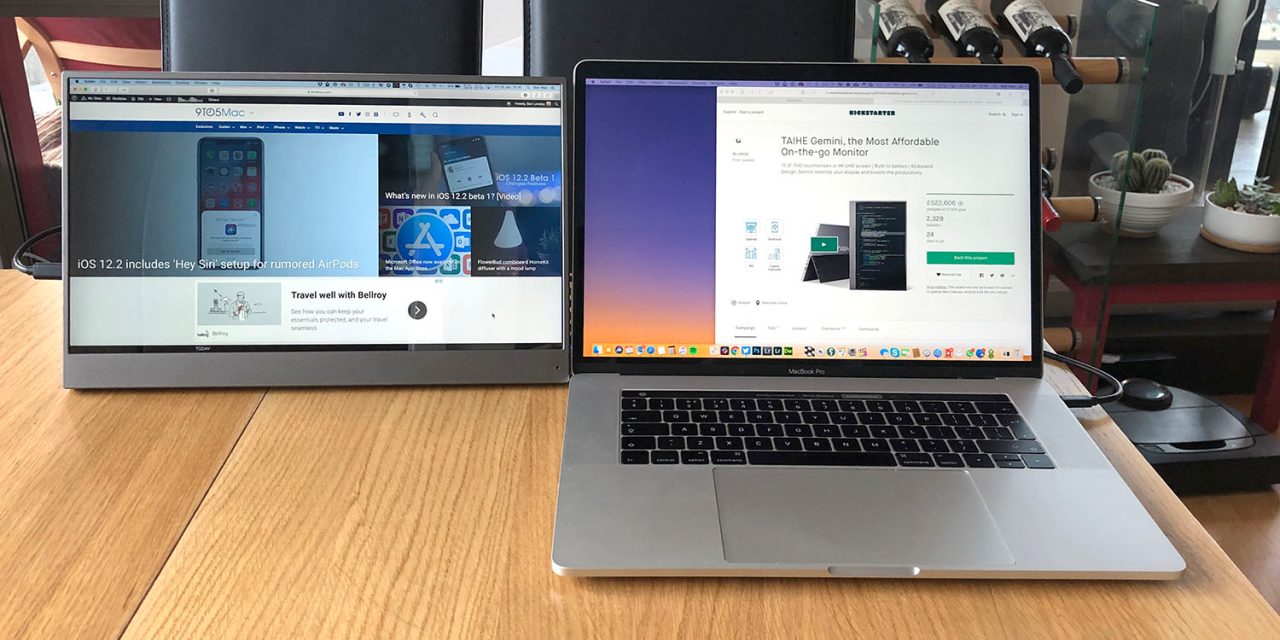 A second monitor is one of the best productivity boosts you can get when using a MacBook Pro, but most monitors are not exactly portable. The Taihe Gemini is.

There are apps you can get to use an iPad as an external monitor, but a crowd-funded campaign has gone one better, offering a 15-inch portable monitor to match the size of the largest MacBook Pro screen. Unlike most existing portable monitors, it’s battery-powered, making for a truly mobile setup …

As we mentioned earlier this month, the Taihe Gemini is available in two versions:

The size and form-factor are the same, you just need to choose whether resolution or touchscreen capability is more important to you. Personally, while I can think of a few occasions on which a touchscreen Mac would be handy, the 4K resolution easily wins that battle, so it’s that version I tried.

I should say upfront that I’m using a prototype model. One of the purposes of a prototype is to provide an opportunity to iron-out any glitches in the design, and there did indeed turn out to be a couple in the model I got. The company has asked me not to go into details, but the wrong value was used for one of the circuit-board components, which means that it becomes unusable when the battery level gets low.

The rear casing was also loose on the prototype at the right rear corner when looking for the rear. Taihe says that it has already resolved both problems in early production units, and I’ll be able to confirm this once these are available.

The Gemini is a slab measuring 14 inches wide by 9 inches tall by half an inch thick. That’s near enough the same size as the 15-inch MacBook Pro. However, at two pounds, it weighs half as much.

The non-anodised aluminum casing is a rather industrial-looking mid-gray. The top and side bezels are thinner than a MacBook Pro, with a one-inch bezel at the bottom.

The rear has a logo, regulatory text and small icons for the ports and buttons, and a hinge for the built-in kickstand. 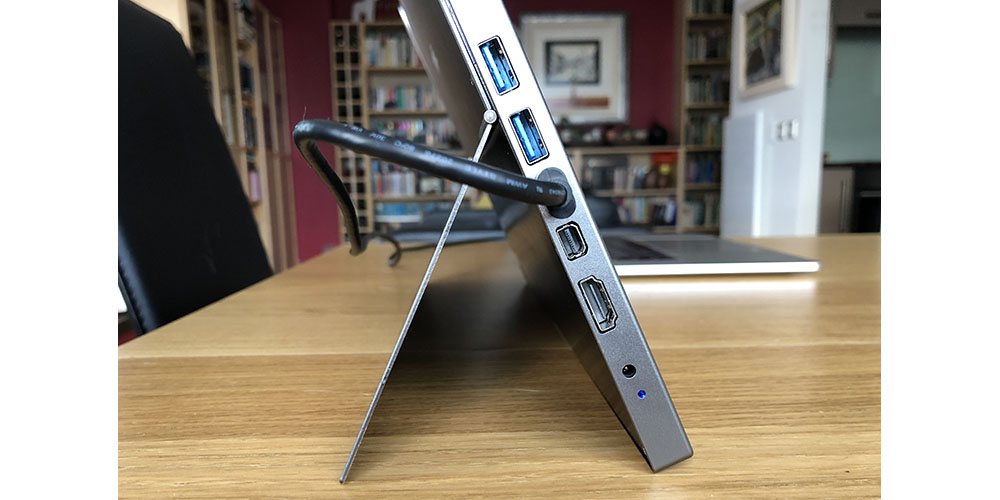 The left side of the monitor has six ports:

The right side has a headphone socket and five buttons, for power and cycling through the various settings. 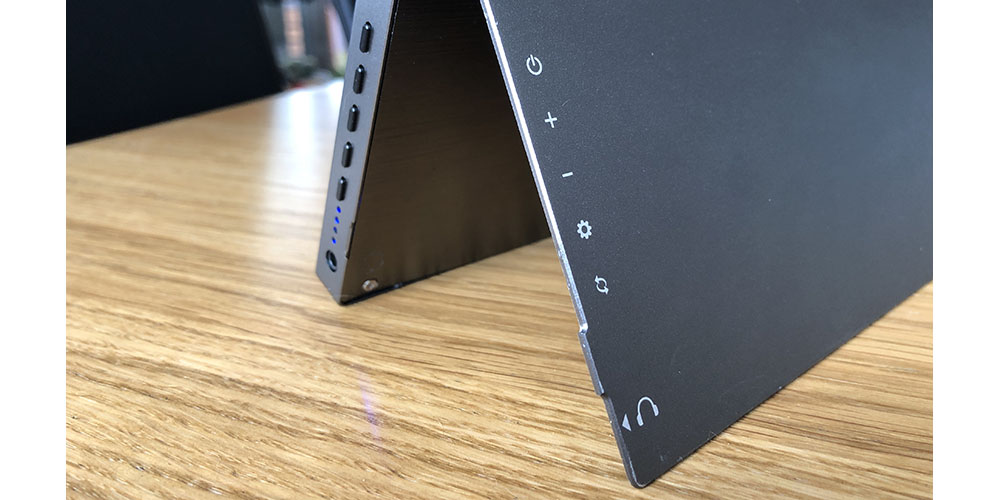 The Gemini is plug-and-play with a MacBook. I tested it with my 2016 15-inch MacBook Pro with Touch Bar.

Flip out the rear kickstand to your desired angle, then hold in the power button to switch on the monitor. It displays the Taihe logo for a couple of seconds, then a No Input screen. You then connect to it using the supplied USB-C to USB-C cable. The monitor defaults to automatically detecting inputs (though you can opt to select manually), so with nothing else connected, it will recognise the Mac and spring to life. It takes 3-4 seconds to do so.

I found that it defaulted to mirrored output. I opened System Preferences > Displays to uncheck that box, and then arranged it as a second monitor to the left of the Mac. 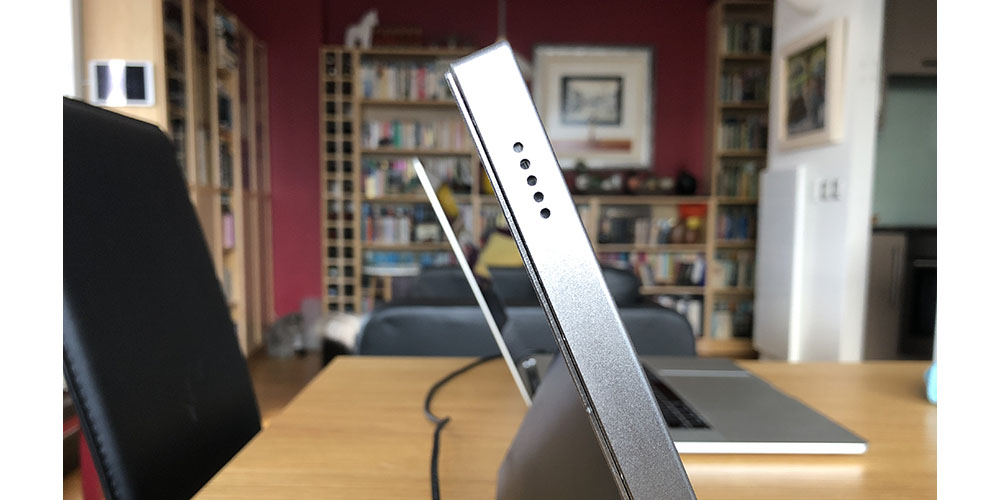 Loose rear casing on the prototype

Once connected and configured, it acts just like any other monitor.

It claims 300 nits of brightness. At maximum brightness, it’s a lot less bright that the Mac screen, but at 50% brightness (the default) it’s roughly the same as the Mac at around 85% brightness. I happily used it at default brightness.

The display quality is really impressive. I couldn’t fault anything in it. Even the color space is 100% of aRGB. Sure, it doesn’t match Apple’s P3, but that’s still very decent even for photo and video work.

My one complaint concerns the settings. It’s the usual TV-style approach: one button to cycle through options, another to select an item, then the +/– buttons to adjust. Annoyingly, the +/– buttons on their own default to volume, not brightness. I can’t imagine a time when I’d be using the monitor speakers rather than the Mac ones, so I’d really like to see the brightness as the default.

Taihe claims five hours of battery-life from the 5000mAh battery, and this is something I wasn’t able to test due to the faulty component in the pre-production model: it became unusable when the power dropped to a certain point. I did, however, get 2h 50m use before this happened, so I’m guessing real-life battery-life at 50% brightness is probably a little over three hours.

The supplied power brick is reasonably compact, so it wouldn’t be too unrealistic to take that along with you if you have table-top plug points, but the lead is too short to make this an option when you are dependent on floor-level power sockets. Powering it from USB-C is another option, so a power brick would be a possible solution if you need longer independent use.

There’s a big difference between the Kickstarter and retail prices, which makes for a tough call. There’s always a risk in crowdfunded projects. However, the fact that I have a working (albeit slightly faulty) prototype in my hands does lend a lot of confidence – it definitely isn’t vaporware.

At $499, it’s a lot pricier than existing options on the market. However, those are generally 1080p and lack a built-in battery. At $299, I’d say it’s a very attractive option. A second screen is a huge benefit for mobile working, and a 15-inch 4K one is a better option than an iPad.

I’ll be aiming to follow up once I receive a production model.

You can back the Taihe Gemini battery-powered monitor on Kickstarter.