The printer is an off-white plastic rectangle with a dark grey base. On the top is a relatively low-key embossed HP logo, and there’s a light-grey HP Tango X label in smallish letters on the front.

The printer measures around 15 inches wide by 8 inches deep by 3 inches high.

The combination of fairly minimalist looks and compact size means that the Tango X is already something that can be tucked away somewhere pretty discreetly, but since even small white plastic boxes aren’t particularly attractive, the printer comes with a linen cover – available in a choice of grey or indigo, which is a rather lovely subdued deep blue color. This looks almost like a dark grey.

The idea is that if, like me, you print so occasionally you’re happy to connect the printer to power when you actually need it, it can just sit on a bookshelf the rest of the time and no-one would even know it was there.

The bad news is that, at 15 inches in the longest dimension, it doesn’t sit upright on most bookshelves. But it does comfortably sit horizontally on our shelves, and yes, you’d never guess what it is. I wouldn’t say it looks like a book, but rather a stylish binder or similar. But it definitely ticks the ‘hide your printer away discreetly’ box. 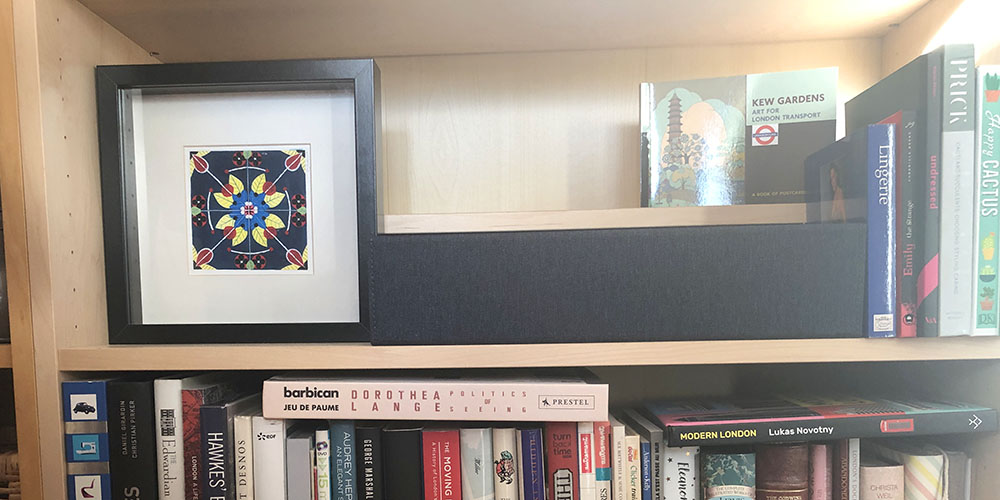 Configuring wireless devices can sometimes be extremely fiddly and unreliable, and I sometimes find I need to resort to sacrificing a goat as an offering to the Wi-Fi gods. But getting the Tango X up-and-running couldn’t have been easier.

You need to install HP Smart software on your iPhone to configure the printer. Opening the app, the printer was immediately detected and it asked for my Wi-Fi details. I entered those, then it used animations to show how to install the supplied black and multi-color ink cartridges.

You’ll notice that it asked in step 3 whether I needed help. This is because I was interrupted at this stage, and thought it was great UI design that it notices a pause and offers additional guidance.

Once the set up was done on my iPhone, it appeared as an available printer on all devices on the network – iOS and Mac – without any further steps.

Both software and hardware set up were really easy.

As a printer designed for occasional use, you need to open the linen cover then lift the lid to insert paper into it. There is no paper catch tray, but the linen cover cleverly performs this function provided there’s enough room for it to lay flat in front of the printer. There definitely isn’t on a typical bookshelf, but as I’m generally printing a single page, I’m happy enough to catch it myself. If I were doing a batch of printing, I’d put it on a table.

As you’d expect, it’s slower when printing photos, a 5×7 print onto photo paper taking about two-and-a-half minutes. At 5×7-inches, it prints fully borderless. If you’re happy with a border, it will go up to 14×8.5 inches.

Print quality is incredibly impressive. The compact size doesn’t demand any sacrifice in the quality of output.

The Tango X does claim that it can scan as well as print, but that’s really just using your iPhone camera to photograph documents within the HP Smart app. It does, however, do automatic cropping when photographing documents, and I found this works well.

Like everyone these days, HP is trying to turn occasional purchases into subscriptions – in this case, monthly subscriptions for ink cartridges though a program known as Instant Ink.

The deal is that you pay a monthly fee, guaranteeing a certain number of prints per month. The printer automatically detects when ink is running low, and re-orders it for you. The paid plans range from 50 pages a month for $2.99 to 300 pages for $9.99.

But you’ll notice that there’s also a free tier! This only gets you 15 pages a month, but for someone like me, that’s plenty.

You do need to buy a new printer to qualify, and you can only sign-up for the free tier if you’ve never had a paid one, but if you’re in the same position as me, the combination of no-hassle automatic re-ordering and completely free ink supplies is definitely appealing. Even if I went over, at $1 per extra 10 pages, I’d need to print 46 pages in a month before it cost as much as the cheapest paid tier, and that’s never going to happen.

The HP Tango X costs $199. You can find it cheaper without the cover, but then you’re losing a large part of the reason for buying it in the first place – the fact that you can have a printer without having to look at one when you’re not using it.

There are many cheaper inkjet printers available, from under $50. Whether this one is worthwhile depends on how much you hate looking at white (or black) plastic boxes in your home. I’d say it’s a luxury item in that you are paying a significant premium for the compact size and disguise, but on the other hand it’s not a huge sum. Whether it’s worth it will be a very personal decision.

But for me, I think it’s a good option to have, and the free ink tier may go some way to helping to justify the price.

The HP Tango X is available with gray or indigo linen covers. It costs $199.