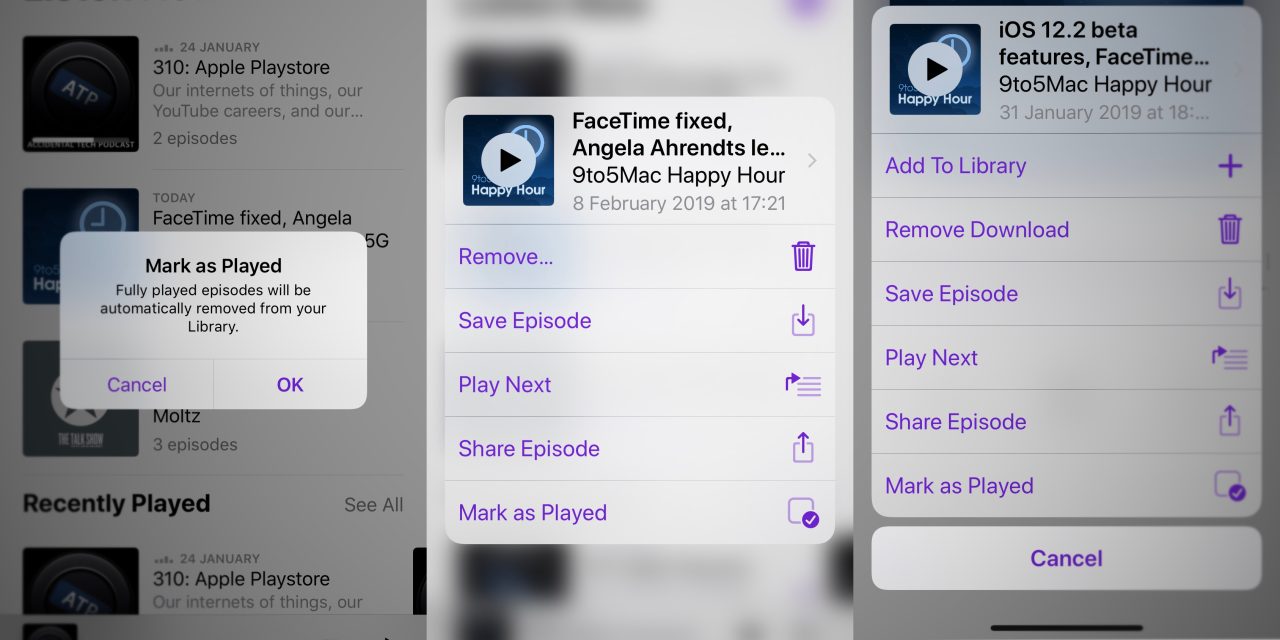 The Apple Podcasts app gets a small, but certainly welcome, new feature in iOS 12.2. You can now tap on the More options menu to access a new podcast feature for episodes: Mark as Played …

This feature is not a cutting edge invention by any means. In fact, it existed in Apple Podcasts before. However, it was removed as part of the iOS 11 redesign which morphed the Podcasts app into a semi-carbon-copy of the Music app interface.

With iOS 12.2, Apple Podcast app users can once again mark an episode as played that they haven’t finished listening to. The More options are available by pressing the ••• icon on a details page for an episode, or in the Now Playing card interface. Mark as Played is a new button available at the bottom of this pop-up list.

You can also use 3D Touch to press firmly on a podcast episode featured in the Listen Now tab, to pop open this same menu.

If you haven’t finished an episode, you will be able to mark it as played. If you have already listened all the way through, the button will read ‘Mark as Unplayed’ instead.

The first time you use the new function, the Podcasts app pops up an alert to explain what it does. This is greatly appreciated because the Apple Podcasts app is surprisingly complicated for something targeted at mainstream users.

There are in fact three slightly different variants of ‘deleting’ a pending podcast episode inside Apple Podcasts. You can choose to Remove Download, Delete from Library, or Mark as Played. With default settings in place, played episodes are automatically deleted. Therefore, the primary difference between Delete from Library and Mark as Played is that marking an episode as played will add it to your Previously Played history.

The new Mark as Played feature addition is exposed in Apple Podcasts for iPhone and iPad. iOS 12.2 is currently in beta; Apple seeded beta 2 earlier this week. The software update will be released for everyone sometime in the spring.

Thanks Aaron for the tip.

Apple Podcasts is Apple's podcast app that is built into iPhones,  iPads, Apple Watch, and Apple TV. It originally debuted in 2012, and is one of the most popular apps for listening to podcasts in the world.