Comment: Samsung’s Galaxy Fold may be premature, but I still see a foldable iPhone in our future

We got one step closer yesterday to a foldable iPhone when Samsung’s real-world folding smartphone was unveiled on stage: the Galaxy Fold.

Samsung first promised a foldable smartphone way back in 2013, when it was complete fiction. It followed this by teasing a prototype device in November last year. We didn’t get much of a look at it, and I had my own suspicions about the timing of that preview.

But yesterday, Samsung announced that the Fold will go on sale in April …

We’ll see whether Samsung delivers on that date, of course. Journalists present at the event noted that the company only showed a pre-production model on stage, and didn’t allow any hands-on time with it. That strongly indicates that the device still has issues which need to be solved before it can go on sale.

But let’s start by taking a look at it.

The Samsung device folds in like a book and therefore has two screens. The “Cover Display” is 4.6″ diagonally at 840 x 1960 with a 21:9 aspect ratio, while the “Main Display” is 7.3″ at 1536 x 2152 and 4.2:3. The Cover Display features very significant top and bottom bezels, while this Infinity Flex screen is rated at “hundreds of thousands” folds before wearing out and features a flexible OLED panel with the cover glass replaced by an “advanced composite polymer.” The hinge mechanism features multiple interlocking gears.

Design-wise, the open screen is edge-to-edge save for an oblong partition — or corner notch — in the top-right that houses two front-facing cameras and various sensors. When closed, the two sides do not fully touch, with a partial gap between. 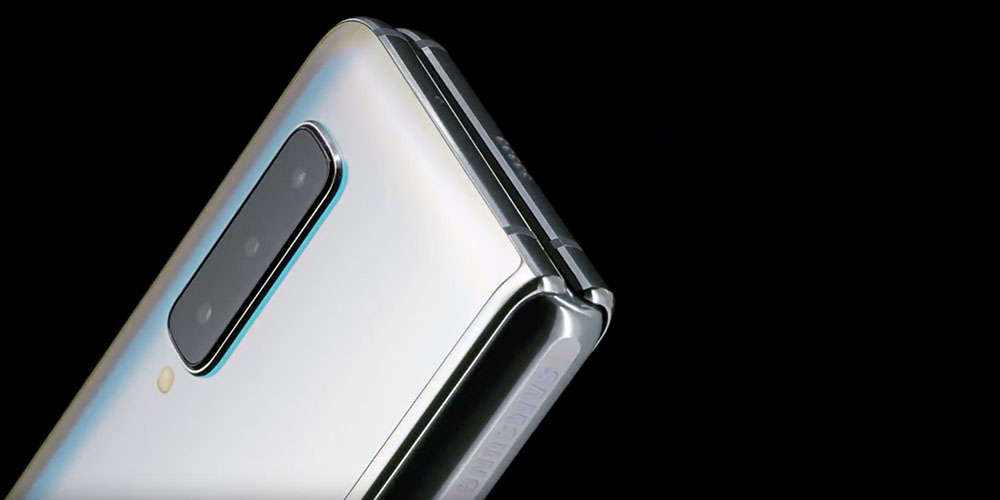 In fact, it doesn’t look dramatically different to the clamshell-style smartphones I used back in the pre-iPhone days.

And the huge forehead and chin on the front also contribute to an old-fashioned appearance.

But open it up, and it’s a different story. 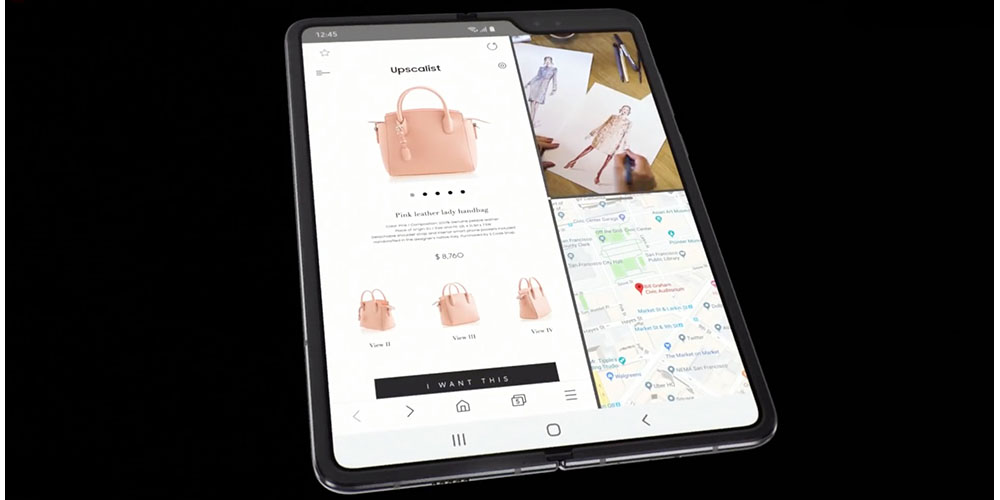 You now have a 7.3-inch tablet. So you’re getting something only slightly smaller than an iPad mini in a form factor that fits inside a jacket pocket. That’s an impressive achievement.

The demo of the UI also looks impressive – like a small Google Map on the front screen automatically turning into a larger one when you open the device. It remains to be seen how many apps support that kind of functionality, of course, and that may in turn depend on how many people buy one.

Which probably won’t be many. People criticised Apple for creating a thousand dollar phone; well, Samsung just created a two thousand dollar one: the official price for the Fold is $1980. That’s a pretty insane price, even if you are getting both a phone and a small tablet.

I’m not going to be buying one, and nor would I even if it ran iOS. That’s just too much money for too clunky a device. There’s only one reason Samsung launched the Fold now, and that’s so it can claim to have been first to market (though Royole may dispute the claim).

That corner notch also looks pretty weird, especially when the device is in landscape orientation.

But this is just a first-generation version of a Samsung folding phone. The next generation will be cheaper and slimmer, and the one after that more so. These things will eventually be mainstream.

Apple, of course, rarely launches into new technology with abandon. It tends to work quietly in the background, aiming not to be first to market, but to be the first to offer a really polished version of the concept.

So I’m not expecting a foldable iPhone anytime soon. But I do expect to see one sometime within the next few years.

I’m not very convinced by the dual-screen approach. As I say, the outside screen makes the device look clunky, and I don’t expect many app developers to support it. I think it may be better to be less ambitious here: have a small modern-looking screen which is big enough to display notifications – something which does the same job as an Apple Watch display – and then one big proper screen inside. That would also make it more practical to do something I suggested last year as a way of creating a slimmer device.

I’d also be tempted to completely forsake a notch. Have the Face ID and front-facing camera on the front of the closed device. Authenticate as you open, then have a completely edge-to-edge display in when opened. The only real downside is you’d be using a small front display to check your selfie preview or make a FaceTime call.

Of course, if Apple does make a foldable iPhone within the next 2-3 years, it will have one thing in common with Samsung’s device: it will be expensive. Two grand is too much even for Apple, but if it can get far enough below this for psychological purposes, then I think there will be a market for it.

And 9to5Mac readers seem to agree. When we asked whether you would pay a premium to get a first-gen one, or wait for the price to fall, a full half of you said you would ‘probably’ or ‘definitely’ pay the premium to get one right away.

What’s your view of the Galaxy Fold? And how long do you think we’ll need to wait for the first foldable iPhone? Please let us know your views in the comments.