Review: The Invoxia GPS bike tracker provides peace of mind… in some places

Any self-respecting bicycle owner with a gadget habit will have at least considered a GPS bike tracker. But the options to date haven’t been overly practical.

GPS signals are weak, and battery life is limited, meaning that it’s not practical to hide them inside a bicycle frame. So the first problem is where to put one so that it can receive fixes and is easy to charge.

A second problem is that, by time most alert you, they are on the move and it will be too late to prevent the theft, only allowing you to track it after the event…

Finally, most trackers rely on mobile data to transmit their locations. That requires a SIM card and a carrier plan, which can be expensive for something you hope you’ll never need.

A few companies have solved the first problem by building the tracker into a bicycle light, but that creates issues of its own. Most keen cyclists have strong preferences for particular lights and aren’t going to want to choose a random one. Even if we use it as a secondary light, bike lights can themselves be popular targets for thieves, so we may end up using the GPS tracker to track… our stolen GPS tracker

Invoxia’s approach is to fit the tracker not to a light, but to a reflector. The theory is that reflectors are worthless, so it’s unlikely anyone would steal one. I like the thinking here, though the actual housing itself looks more like a light than a reflector. That said, it has no switches, so hopefully thieves will figure it out — or at least decide it’s broken.

Invoxia solves the second problem by including a motion sensor. With the Anti-theft Alert toggle on, it will alert you the moment someone moves the bike, even by a few centimeters. That means you’ll normally get the alert before the would-be thief has even started work on the lock.

Invoxia also has a great solution to the third problem: a GPS bike tracker that doesn’t require a SIM card or mobile data plan.

It instead uses the Sigfox network, specifically created for use by Internet of Things devices. Sigfox uses Ultra Narrow Band modulation in the 200 kHz band. The downside of this frequency is very slow transmission speeds, as low as 100 bits per second. But that’s fine for very short transmissions like an ID code and GPS coordinates. And what Sigfox lacks in bandwidth, it makes up for in distance. So you don’t need a huge number of base stations to receive these transmissions from devices.

But you do still need them, which brings us to the biggest limitation of Sigfox at present: coverage.

If you look at a Sigfox coverage map for the US — blue being current coverage, purple being planned — things don’t look too good. 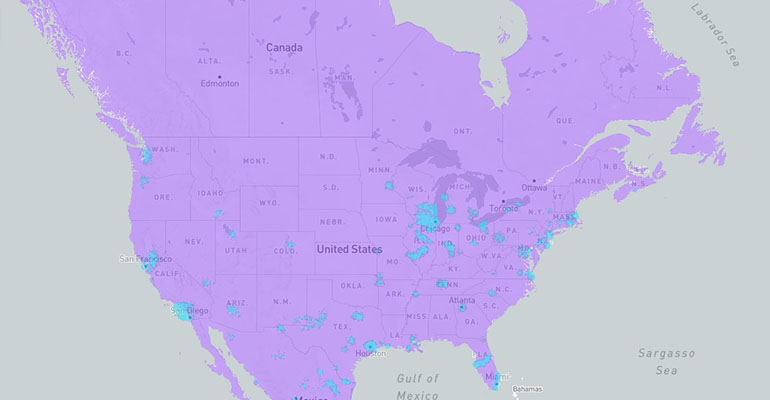 And indeed, if you live in any of that great swathe of purple, the product is useless to you — at least for now.

However, Sigfox has you covered if you live in the largest cities. New York, for example: 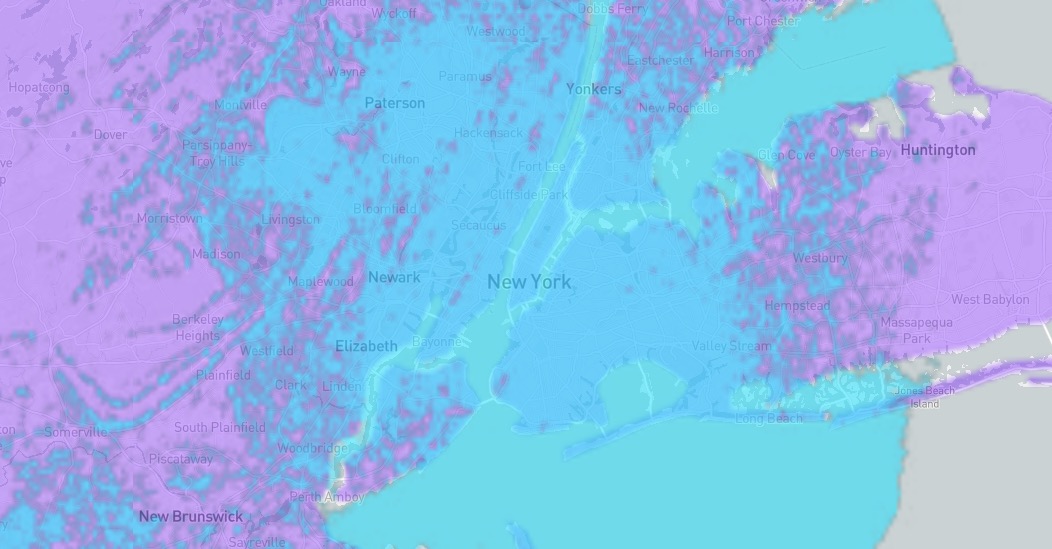 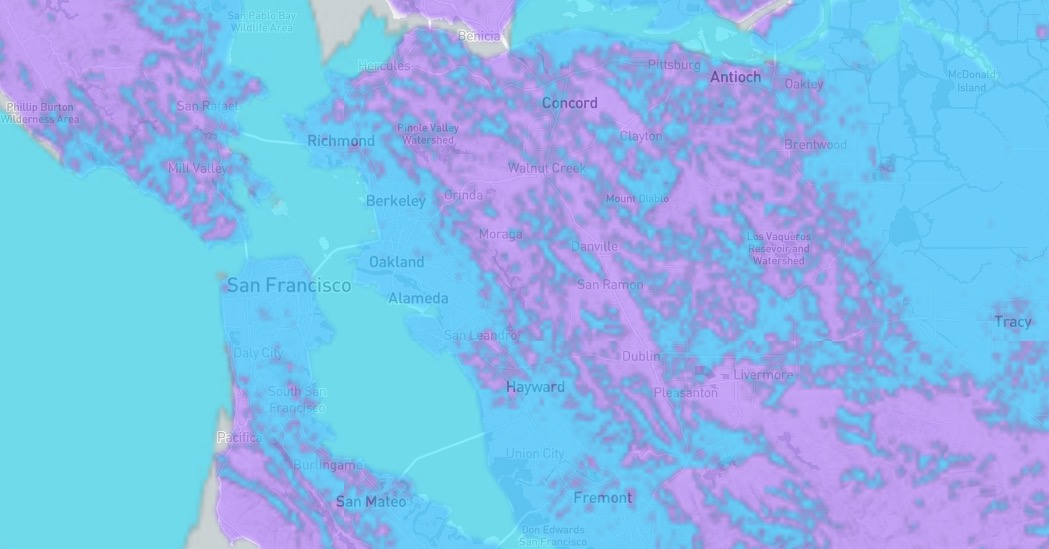 Or in quite a lot of Europe: 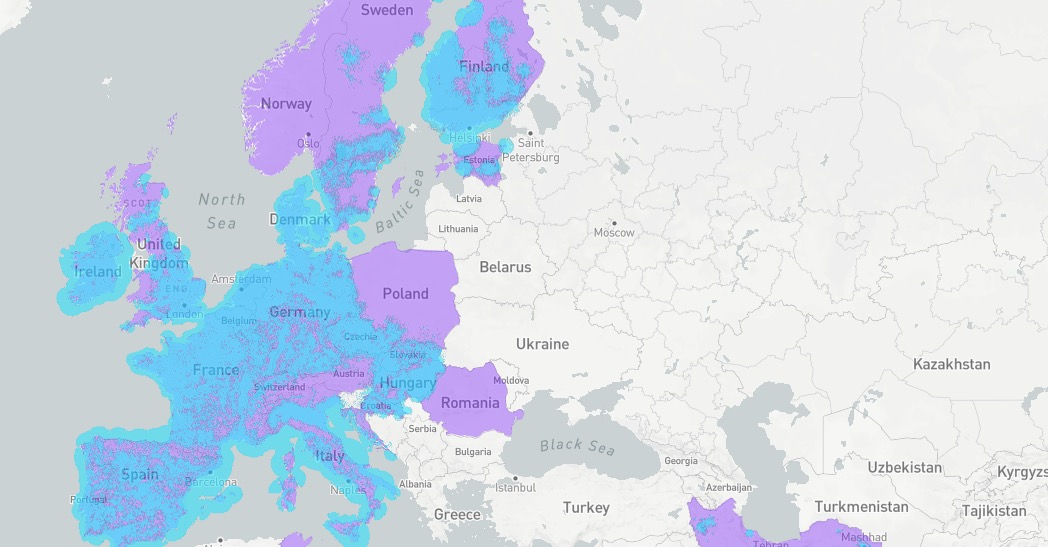 So the first thing you’ll want to do before reading on is to check out your location here.

Even if it’s good, the device isn’t yet officially on sale in the US, so you’d have to buy it from the company’s UK site. However, coverage in England is good, and almost 100% in London: 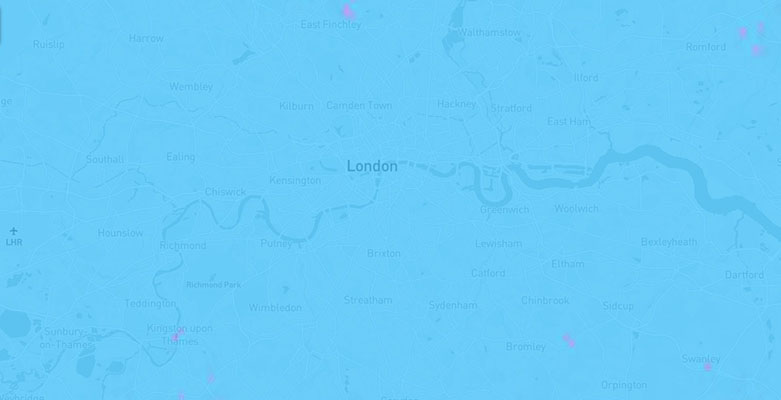 Invoxia has pulled off a neat trick here. The company has taken its existing Pet Tracker and packaged it inside a reflector housing.

The tracker itself is black plastic and measures around 1.7 inches long by 1 inch wide by two-thirds of an inch deep. If you buy the pet version, it comes with elasticated rubber straps to attach it to a collar.

The Invoxia GPS bike tracker is exactly the same unit inside a reflector housing. This is rather bulky by normal reflector standards, but fits to any seat post and looks pretty unobtrusive when it’s installed.

Setup is simple. Connect the tracker to power, which wakes it up, then bring your iPhone within Bluetooth range. Once the device is detected, give it a name. In my case, it’s for my copper-plated Brompton, so I called it Copper Brompton.

Once that’s done, you can fit it to your bike. The reflector attaches to the seat post with a couple of hex bolts, and attaching it with the included hex key takes just a few minutes. A third hex bolt allows you to remove the reflector and insert the tracker.

That would be a bit of a pain if you had to remove it to charge weekly, but Invoxia claims a battery life of a month, and my own limited testing suggests this isn’t far off the mark, so I don’t mind doing it that often. Removing it takes 30 seconds, and refitting it the same.

You can then open the app at any time to see where your bike is. Zooming in, I have found that it is extremely accurate, reliably identifying the exact building. 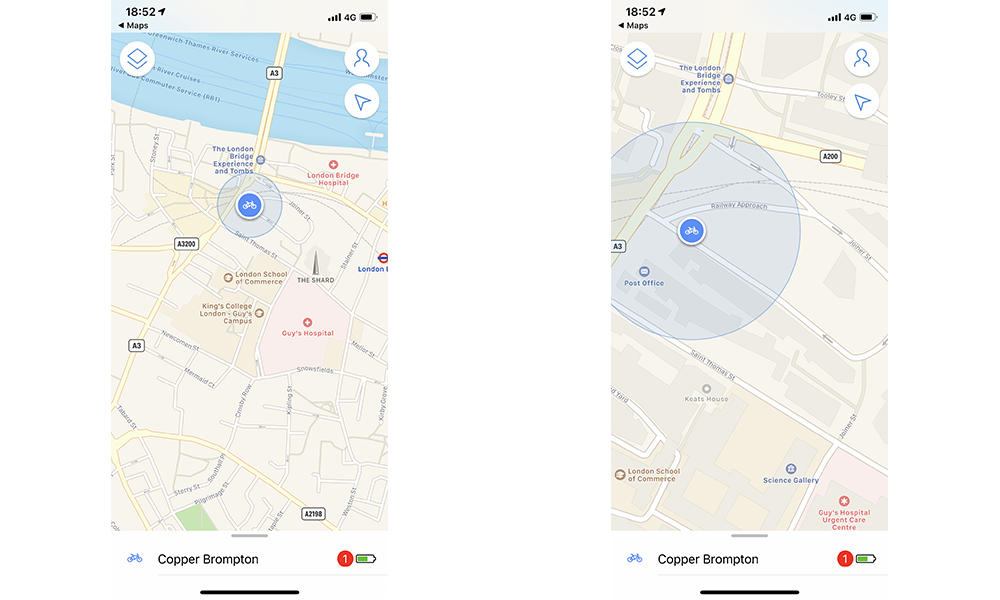 You can then set three different types of alerts:

The first two functions rely on the Sigfox network. By default, the unit reports its position every 10 minutes when moving, so on average, you’ll have to wait five minutes to receive either of these reports. (You can increase or decrease the frequency of transmissions to balance timeliness against battery life.)

But you also have the option of the Anti-theft Alert. This uses the motion sensor to send an instant alert. My testing of this found that it pinged me within a second or two with even the slightest of movements.

The Invoxia GPS bike tracker in use

The beauty of a device like this is that it’s close to fit-and-forget. If you are content with tracking and don’t want instant movement alerts, the only thing you’ll need to do is respond to the low-battery alerts. You get the first of these when it’s down to 20% power, and a second one when it’s so low that it drops into a low-power mode.

Most people will want alerts, though. To create a zone for your current location, just hit the button to add a zone, then select the radius. I have one for my home, for example. You can create multiple zones, for example a work location, gym, and so on. Zones too are “set and forget.”

But the movement sensor goes one better, alerting you as soon as someone touches your bike.

Should the worst happen, the police are more likely to be interested in a bike theft when you can show them exactly where it is — right down to the exact street address. Invoxia also says that its own teams work with the police, and that it has helped the recovery of several hundred stolen vehicles.

That’s a fair chunk of change. If your bike is worth $500-600, you’re being asked to invest quite a significant proportion of the purchase price in a theft-protection device.

But if you have a much more expensive bike, and especially if yours is in some way unique — either a special order that would take a long time to replace, or has sentimental value because it was a gift or you’ve visited a lot of places on it — then you may well decide it’s worth the pain to your wallet for the peace of mind.

I think I know quite a few friends who will go for it.

The Invoxia Bike Tracker is currently only available from the company’s European websites. It costs £149 in the UK.